Mary Shelley’s Frankenstein  has been reinterpreted countless times.  Just in terms of cinema, the tale of man playing God has been adapted endlessly  since the Thomas Edison produced short silent film version in 1910. Now over 100 years later, we have  Victor Frankenstein, a 21st century revamp of the iconic tale from director Paul McGuigan (Lucky Number Slevin and episodes of  television shows like  Sherlock  and  Scandal) and screenwriter Max Landis (Chronicle,  American Ultra  and son of director John Landis).Victor Frankenstein  strives  to be a clever  subversion of  the traditional version of this story, almost directly stating that “This ain’t your grandpappy’s  Frankenstein” to the audience with every single twist and turn it  takes on the tale. Right from the start, we hear Igor via narration admit that “You know this story…” as a means of setting up a new perspective on the horror tale. Unfortunately, that perspective doesn’t seem skewed enough to warrant all of the grandiose set up.

Victor Frankenstein  opens not on its titular character, but on an unnamed hunchback (Daniel Radcliffe) working as a clown at a circus. He’s constantly abused, but becomes fascinated with the human anatomy and recluses himself in books on the subject. One night, his unrequited love and trapeze artist Lorelei (Jessica Brown Findlay) falls during her act and breaks her collar bone, which he places back without the aid of tools. This greatly impresses audience member  Victor Frankenstein  (James McAvoy), who  breaks the abused hunchback out of the circus, brings him to his elaborate apartment and removes the hump  that turns out to be a cyst. Frankenstein allows the man to live in his house, telling him to use the name of his often absent roommate “Igor.” The two become a pair of scientific bros, crafting a project that will bring life to creatures once dead. During all of this, Inspector Turpin (Andrew Scott) is investigating the theft of animal parts and death of a circus worker that happen during Igor’s escape, leading him to our protagonists. Will  Victor Frankenstein  and his brother in science Igor be able to complete their Modern Prometheus or will it all fall apart at the sewn together body part seams? 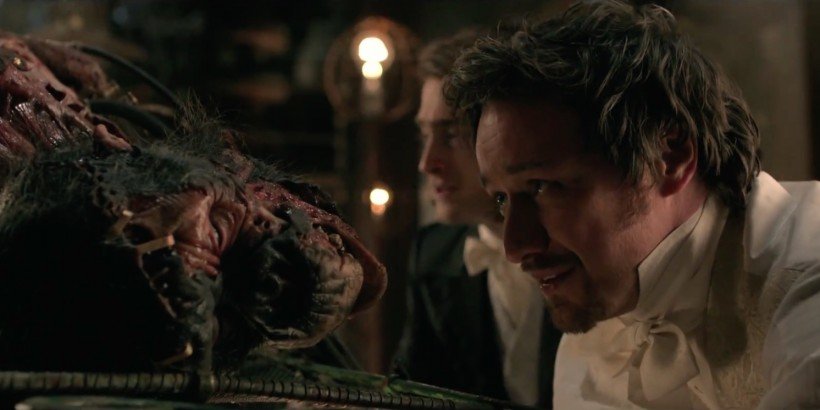 For the many faults that can be found in  Victor Frankenstein  – and believe me, there are  many  faults to be found – there’s still a genuinely interesting spin of the Frankenstein mythos buried within it. This shines brightest during the earliest scenes with Igor and Victor, where the two share an initial respect for each other based on their mutual love of science that grows into a genuine friendship. Much of this can be attributed to the energetic chemistry between Daniel Radcliffe and James McAvoy, in which they share a bromantic bond that skirts the flirtatious rounds of a romantic relationship through meere glances at one another. Radcliffe  commits to the idea of an Igor who has just lost his abnormality and gained a newfound respect as a traditional looking person, adjusting to his proper posture and freedom with a wide eyed  exuberance. This contrasts quite well with McAvoy’s manic glee as a mad scientist in the making, detailing plans to essentially create an early crude version of artificial insemination and delightfully adding power to animate two eyes in a jar. Too bad that  the third act introduces a reveal about Victor’s past that feels like a rather contrived explanation for his obsession with death, lessened even more so  by the fact of it being treated as a climactic reveal rather than a moment to introduce and develop further. At least he gets something, unlike Igor who mostly becomes a shadow of a character by that same third act.

Still, the two of them are largely the saving graces of  Victor Frankenstein, along with the occasional shades of Max Landis’ manic clever subversions of the  Frankenstein  story that keep the characters in tact, particularly with Victor’s initial animal creation Gordon or the treatment of Igor’s hump. Yet, shortly after the former comes to not-so-glorious CG life,  Victor Frankenstein  quickly falls apart like a malformed Prometheus mock up of Victor’s. One of the key elements of confusion here is who exactly this version of Frankenstein  is meant to follow. It starts with Igor in the circus, then transitions into being a buddy movie before giving a major factor of the focus to the titular  Victor Frankenstein  as he actually has a quasi moment of discovery during the third act. All of this gradually puts Igor to the side to be more of a plot mechanism with no real growth.  The largest sin here though is that Paul McGuigan’s direction is muddled as all hell, barely managing to convey a solid action sequence without distractingly rapid cuts and a total lack of coherence.  There are points where Victor is fighting against another person and the edits barely seem to have a consistent rapid pace to them, thus making the action feel awkward and clumsy far more often than not. Even the more visual effects focused sequences feel poorly put together, with no sense of actual space considered for the CG and an explosion heavy finale that has no sense of impact or even chaotic reasoning to it. Those scenes serve as a visual metaphor for  what  Victor Frankenstein  ultimately is: a mess. 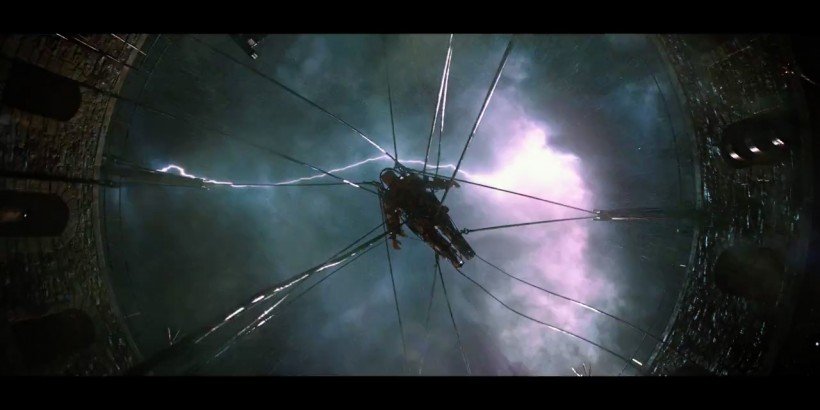 This continues with the characters outside of Victor and Igor. Jessica Brown Findlay role as Igor’s love interest is totally thankless, only there seemingly to serve as proof that at least one of the two protagonist that spend so much time together isn’t gay from Victor Frankenstein‘s producers. This may seem like a harsh interpretation of potential intent, but it wouldn’t be an issue if not for the fact that the chemistry between McAvoy &  Radcliffe  simmers with far more passion than anything between the latter & Brown. Hell, the second act even contrives a romantic comedy style end-of-the-second-act-break-up for the two of them that shows a sense of longing regret from Igor as Victor rides away. I couldn’t be the only one who saw this and I honestly just wanted to see them commit to at least selling the potential subtextual implications of that relationship, more so because it would have made the film far more interesting and stuck far more to that revisionist history nature promised by the opening far more. Andrew Scott’s inspector character has  a religious bent that sets up some solid ideological conflicts between himself and Victor, but that’s all just mentioned at one point before being literally tossed aside during the climax. Even worse, a second villain is introduced right at the end of the second act to further encroach on Igor and Victor’s friendship, which only manages to create completely false tension and weirdly introduce Sherlock  &  Doctor Who  writer/actor Mark Gatiss as villain #2’s moustachioed second in command.

All of that shows just how crowded  Victor Frankenstein  is as a film. All of these elements are so clunky in terms of development, presentation and thematics that it never really jells together. Even with the committed chemistry of McAvoy and Radcliffe, by the end their characters really haven’t gone through a true change. They aren’t that different from their first experiment half way through the film, seemingly forgetting about moments that were so key minutes prior. Before going in, the general feel of Victor Frankenstein  seemed to want to mirror the extremely successful Guy Ritchie series of sleek  Sherlock Holmes  films, complete with a steam punk aesthetic to the production design, modern retooling of Victorian era and a witty back & forth between the  leads. Yet, what made that first  Holmes  film work was a more consistent sense of style and rapport between Jude Law and Robert Downey Jr. Instead,  Victor Frankenstein  more resembles the lesser sequel  Game of Shadows, in that the characters and style are lost in the convoluted plot, underwhelming villains & fight scenes and a rushed ending that closes the film on a whimper. Ultimately, even the subversions that would have made this version of the tale unique wither away in favor of half assed action that sacrifices the glimmer of cleverness with  its bland third act that doesn’t even have the decency to deliver on a solid reinterpretation of the monster. There’s a good film  within  Victor Frankenstein, but it’s definitely not one  we ended up getting. 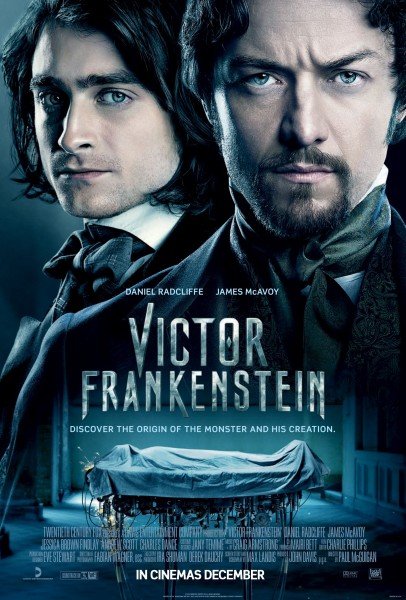 In horror, it is often stated that what is implied is more frightening than what can be seen explicitly. Writer/director Nicolas Pesce embraces this philosophy in his directorial debut The […]

The idea, at least on paper, is terrifying. A woman, Marla Mae (Lisa van Dam-Bates), who has always wanted an IUD (intrauterine device) but for some reason has never gone […]

The best thing about the world of horror is the multitude of sub-genres that exist within it. You’ve got slashers, zombies, ghosts, demons, vampires, werewolves… the list goes on and […]