Ash J. Williams has always been a loner. The Evil Dead  essentially taught the Deadite killer that he could only rely on his own wits to get him out of a situation the hard way. Evil Dead 2 and  Army of Darkness  even taught him that a demonic evil could come from within to challenge him.  Now with  Ash vs the Evil Dead, the threat of the Deadites is more large scale and Ash can’t rely on just  his own shoot-first-ask-questions-later routine to save the day. With Pablo and Kelly in tow, Ash can have a more modern perspective to ground him, especially as more varied demonic threats come to light in this episode.

However, before any of that is truly displayed, we get our first full scene of Lucy Lawless in action. The former Warrior Princess starts the cold open by checking in on Kelly’s family’s house in search of Ash, investigating their makeshift graves only to come face to face with Kelly’ Deadite possessed father after he rises out of the ground. However, she wastes absolutely no time in dragging him out of the grave and pinning him on Ash’ poorly constructed cross and interrogating him about the Deadite slayer’s whereabouts. Despite not giving us much about her identity, we get a decent sense of her characterization, particularly with the fork flicking moment. While the show hasn’t given us much about Lawless’ character, there are a few interesting hints here, such as the dagger that  seems familiar to the one in  Evil Dead 2, connecting her to Professor Knowbly and her daughter Annie. Then again, if you saw Lawless and Bruce Campbell on  The Late Show with Stephen Colbert  earlier last  week, Campbell basically blurts out her true identity. But, we’ll have to see how  Ash vs the Evil Dead  unravels the mystery. 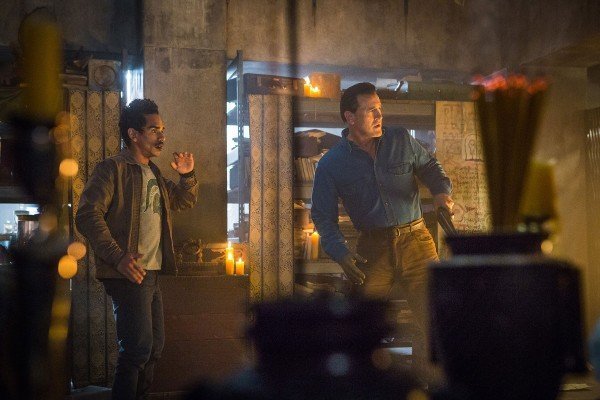 Meanwhile, our band of “Ghost Beaters” (Pablo’s attempted nickname for the trio) have arrived at the titular Books From Beyond, an occult store where Ash attempts to get a  translation of the book from his occult nerd friend Lionel Hawkins (Kelson Henderson) who works at there. As the trio step inside, they see that Lionel is being questioned by none other than Amanda Fisher. While Amanda walks out to confirm if Ash matches the suspect drawing, Ash introduces Pablo (and the audience) to Lionel. Lionel is a key player in tonight’s events, but mostly as a rather uninteresting vessel for exposition and plot development. Despite Ash’s claims about his weird nature, he’s pretty unremarkable, especially for someone who has such a clear interest in the occult. It’s not like Lionel has to be the most complex character, but at the same time he sort of pales in comparison to even the more supposedly “normal” characters like Pablo or Kelly and he’s so heavily involved in the overall plot. In any case, Lionel speaks of a method to destroy the Deadites; by having another demon give  them information in an “enemy of my enemy is my friend” type scenario.

As this is going on, Amanda bursts in attempting to arrest Ash and his compadres, but not before she’s knocked out and handcuffed to a bookshelf ladder. Kelly keeps watch over her while Ash and Pablo further investigate Lionel’s readings of the book. It’s honestly a shame that Amanda’s encounter with Ash is wasted here on hijinks, as this would have conceivably connected these two disparate parts of  Ash vs the Evil Dead  in an interesting way. Instead, she just acts as a plot contrivance  to release a new demonic entity into the show, once she spooks Ash just enough for him to accidentally break a salt constructed pentagram that keeps the Eligos demon at bay. Eligos is admittedly a solid  design and a more intimidating  foe than Ash has fought previously, one that has more powers of manipulation over time and space than the average Deadite. Plus, Ash foolhardily attempting to fight off this demon is creatively done, utilizing this demon’s powers to their full extent. Still, the most interesting thing about all of this is the Raimi esque-touch of a reanimated bird fetus that Pablo kicks away.

In the process, Amanda is knocked around and Lionel is stabbed with glass shards manipulated by Eligos, but they’re not the main focus of this conflict. What does take center stage is Ash relying more on his compadres Pablo and Kelly. There’s a bit more of a rapport development here in terms of Ash entrusting one of them to watch Amanda while the other attempts to help him out with Lionel. After handcuffing Fisher again, Ash admits that his “lone wolf” status probably would have gotten him killed this time around. It’s a small arc for Ash to go on that isn’t that well developed for this episode, but still an important one  Ash vs the Evil Dead  needs in order to fend off growing stale. Seeing Ash  let his Duke Nukem  level badass persona guard down a little to be somewhat humble seems like the start of some progression  and could potentially tie into the ominous message of  “The annulment lies inside the origin of the man” from the Necronomicon. I hope that at least applies to those  Fight Club style brain and DNA flashes we got, especially since Ash has clearly been dealing with weird inner demons given  the mirror scene in  Evil Dead 2  and his main Deadite cloned adversary in  Army of Darkness.

Overall, “Books from Beyond” is as of yet the weakest turn for  Ash vs the Evil Dead. Not a bad episode at all, but one that feels too contained and exposition heavy to keep up the energy of El Jefe and Bait. Plus, it continues to keep Fisher fractured from the rest of the story in a way that worries me as to whether they’ll actually use her in a way that matters to the overall plot, especially in favor  of  someone as boring as Lionel. Still, there’s a bit more forward momentum here that could easily develop over the next seven episodes. I just hope they get more Lucy Lawless in here quickly.

Best Ash Line:  “After this, we can go get churros.  That’s not racist, Pablo, that’s just a great dessert.” Ash trying and failing to be inoffensive is hilariously  awkward every time.

Next Week on Ash vs the Evil Dead:  “Brujo”, which will involve Ash, Pablo and Kelly visiting Pablo’s grandfather and some sort of meeting  between Fisher and Lawless’ mystery woman.

Ash vs. the Evil Dead  Season 1 Episode 3 “Books from Beyond”:

This review contains spoilers. Well, Grue-believers, the finale of Scream Queens departed with a 2-part episode. The season overall is  a winner for me with hilarious quips, great sarcasm, ingenious insults and just downright swell acting, directing and writing. With that being said, let’s jump in to see if the finale holds  up. I won’t […]

The Starz horror TV series Ash vs the Evil Dead grabs its audience’s  attention quickly within the opening  minutes as Bruce Campbell shakes and grooves to Deep Purple’s Space Truckin’. “One more for Bubba,” Ash slyly references another film early in the opening of the pilot episode “El Jefe” to let the audience know what […]

Ash vs the Evil Dead  has been capable of doing many things that the original  Evil Dead  films really  didn’t touch. An extended narrative, sexual intercourse and, as seen in this week’s “Brujo”, drug implications. Despite  a premise where  a group of teenagers get away to the woods,  The Evil Dead  isn’t a film that […]