Are you unaware of how to find nude women on the internet? Do you find poorly put together comedic set pieces used to pad out a running time entertaining? Does the idea of Michael Madsen‘s sad weathered face popping up for fifteen  minutes of screen time sound like fun to you? If the answer to all those questions is an extremely  sad “yes”, then the low budget slasher comedy  Lumberjack Man  is just the film for you. One of the octet of films featured in this comeback year for the After Dark Horrorfest, director Josh Bear’s  Lumberjack Man  is advertised as one of “8 Films To Die For.” Unfortunately, you may actually find yourself dying from boredom thanks to painfully unfunny gags  at the hands  this supposed horror comedy. Gags like  a man dressed in half assed Jesus cosplay asking two ditzy ladies if they’re ready for “The Second Cuming” for which his penis “Has Risen.” Then again, if one did die at that point in the film, I couldn’t blame them. In fact, I’d envy them.

Lumberjack Man  follows a group of teens serving as counselors at a church camp in the middle of the woods. On the first day, each of them is assigned a task to perform while preparing for the arrival of the children, though most of them completely drop said tasks in favor of stumbling about the woods. This mostly involves  female counselors taking their clothes off, male counselors creepily leering at those women  taking their clothes off and the head counselor Doug (Adam Sessler) trying to keep things right in the eyes of God. In between those “shenanigans”,  Dr. Peter Shirtcliff (Michael Madsen) is desperately trying to warn the local police that there’s an  undead  lumberjack killer roaming the woods looking to claim innocent lives. While his assertions are tossed to the side as silly superstition, the titular  Lumberjack Man  starts pick off counselors one by one  so that their blood may serve as a syrupy topping for his massive stack of flapjacks. 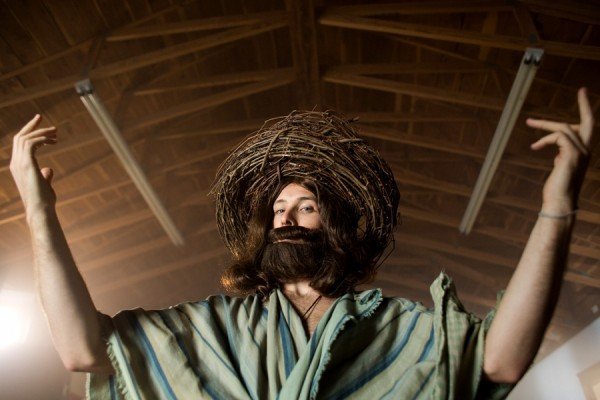 The complete lack of creativity spills over into other aspects of  Lumberjack Man  like the blood that slides onto the clearly cheap giant plastic  flapjacks of the titular murderer. None of the death sequences here are memorable and clearly showcase the film’s lack of budget, most of them involving these cardboard cut out characters getting their heads smashed against walls with horrendous gore effects. Even the kills that have potential are obscured and lack any genuine effect thanks to  the shoddy camera work, including one shot completely out of focus. Some are just down right confusing, particularly  a death where the  Lumberjack Man  folds a woman’s limbs in extremely tight close ups  until it’s  revealed that she’s bent over in a  table top yoga position. Initially, it’s supposed to be a set up for a gag where the he  would eat one of his flapjacks on her table cloth covered mangled body… but then he puts down his flapjack, grabs the table cloth with her body in it and throws it at a tree. It removes the potential for a somewhat funny sight gag for what is either a play on expectations or a sign that the filmmakers gave up. I’ll lean more towards the latter. 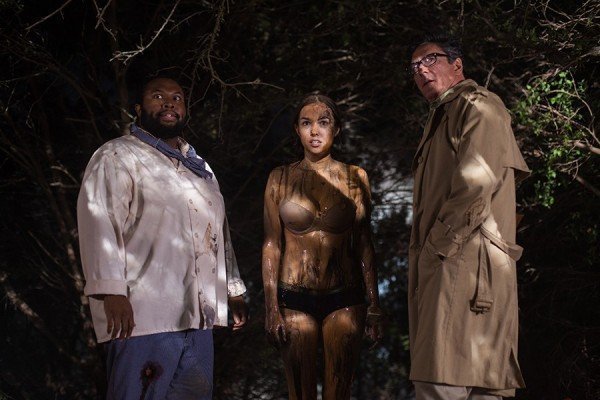 The biggest draw that will inevitably be scrawled on the DVD cover of  Lumberjack Man  is the presence of straight-to-video mainstay  Michael Madsen. Here, Madsen is in his usual “not giving a single crap” mode, barely graveling out his lines with the gusto of a drunken sailor with throat cancer that stumbled onto the set. There are several points where it’s clear that Madsen’s scenes were shot separately from the rest of the actors, with the closest human interactions he has throughout most of the film being with their stand ins that sit in the foreground as Madsen mumbles his lines. The finale has him interacting a bit more with Jarrett King and Ciaran Flynn‘s characters as they’re chased by the Lumberjack Man, but all three of them are forced to spit out terrible comedic dialogue that distracts from the tension in favor of endless “jokes” about smart cars and the purposefully lazy reasoning for why Flynn has to be naked &  covered in syrup. The entire time, you can see Madsen painfully hoping for sweet release so he can get back to filming with his buddy Quentin Tarantino on  The Hateful Eight.

By and large,  Lumberjack Man  is a complete waste of time as a horror comedy. As a horror film, the gore is largely obscured and the kills bring  nothing clever enough to make up for its budgetary constraints. As a comedy, the humor isn’t just crude, but poorly constructed and without any sort of genuine sense of charm that drags the pace of the film to a crawl. Most of the cast over plays it in an annoying fashion, with the exception of Michael Madsen who is just clearly trying to get through it. Honestly, the only slightly solid thing about the entire proceeding is the design of  the  Lumberjack Man, which recalls size  of a Jason Voorhees with just the right tinges of mountain man clothing and a wooden mask to distinguish itself. Shame a solid design was wasted on what will likely be one of my least favorite viewing experiences of the year.

Director Patrick Rea delivers a wicked little tale of sibling rivalry and voodoo in his short film Counter Parts. The film opens with twin sisters (Somyia Finley) fighting over a doll as youngsters; then the story brings us to the present, where one sister is a famous actress, Alexis McCoy, with addiction issues and the […]

While the title may conjure forth images of adorable little fuzzy critters with Yoda-like ears that should never get wet, be fed after midnight and kept out of the sunlight, Ryan Bellgardt’s  Gremlin is anything but a (mostly) family-friendly film and, regrettably, Phoebe Cates is nowhere in sight.  What Bellgardt DOES deliver is a story […]

“Malatesta’s Carnival of Blood” (1973): A Creepy and Psychedelic Tone Poem from the Early 70s

From the title Malatesta’s Carnival of Blood, one might expect a Herschell Gordon Lewis style B-movie gore fest. Instead, one gets a creepy, atmospheric, low-budget cross between art and exploitation. A young woman and her parents discover strange goings-on at the run down carnival at which they recently began working, and they find themselves having […]