Howdy, folks! It’s your ol’ buddy Chad again! Your Gruesome poster boy for, well, posters, boys! And I’m here to do some public service. Do you find yourself walking in the opposite direction if a black cat crosses your path? Are you afraid of stepping on a crack in the pavement for fear of breaking your dear ol’ mother’s back? How about spilling salt and throwing it in the eye of the poor dude sitting behind you at lunch? Hey, we’ve all been there. I’ve  still got six years to go on that whole cracked mirror deal. Sheesh.  But it’s time for all of us to face these fears head on. Especially with that unluckiest of days just around the corner: Friday the 13th!

I present to you, Grue-Believers, in no particular order, the Top Friday the 13th posters of all time!  You guys know my rule on posters: just because the movie sucked doesn’t mean the poster does.

This bad boy is from Marcus Nispel’s 2009 rebootish, recalibrated,  or reimagined entry in the series. Say what you will about the actual movie, this poster presents an imposing Jason. He looks scary and means business. And whatever you do, stay out of his pot field! It’s got a death curse. 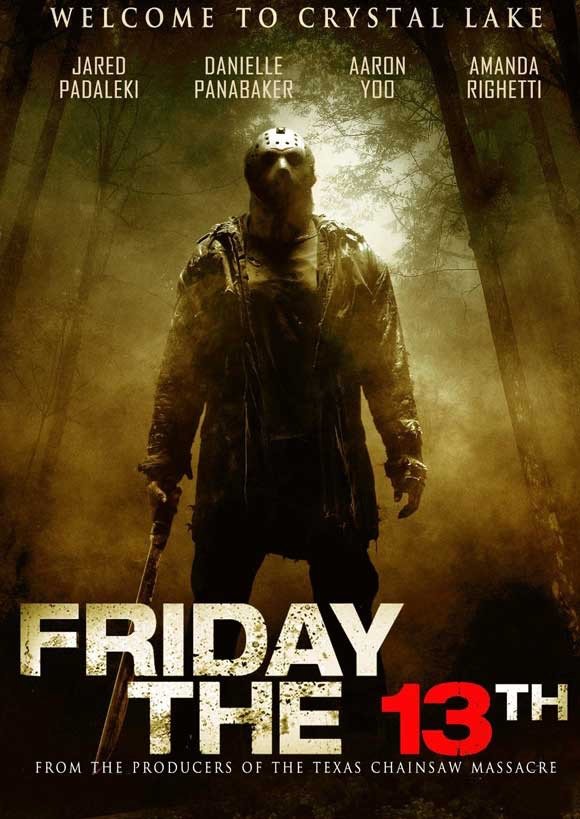 The original poster for this glorious 3D outing was sort of a copy of the first two posters with the vague shadow of the killer wielding a bloody knife through a shower curtain. As a kid, I didn’t really get this poster. It made me think  that someone was pissed that Jason was using up all the hot water in the shower and decided to tell him.”C’mon, man! You’re not the only one here! Save us some hot water!” Whereas Jason then pulled a knife on said kid as if to say, “Not done. Back off.” Then we hear canned sitcom laughter as the kid backs up slowly with his hands raised. Heh. Yeah. What was I talking about again? Oooh, yeah  . .  . 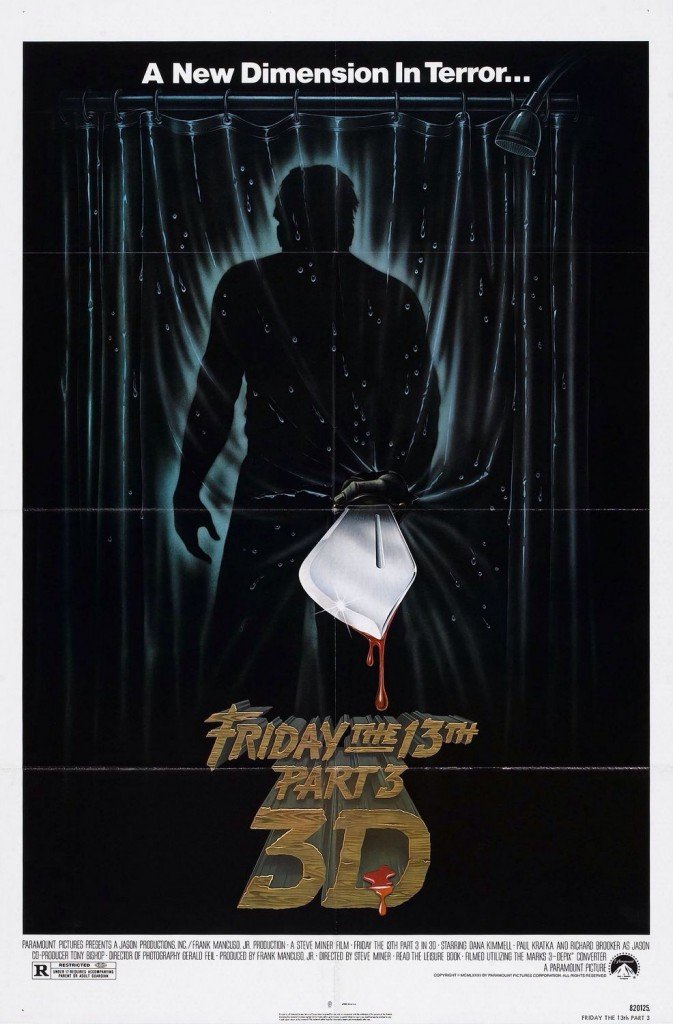 This one makes more sense, but I believe this was released way after the movie came out, and was not an official poster. It was a  video cover at one point, I think. 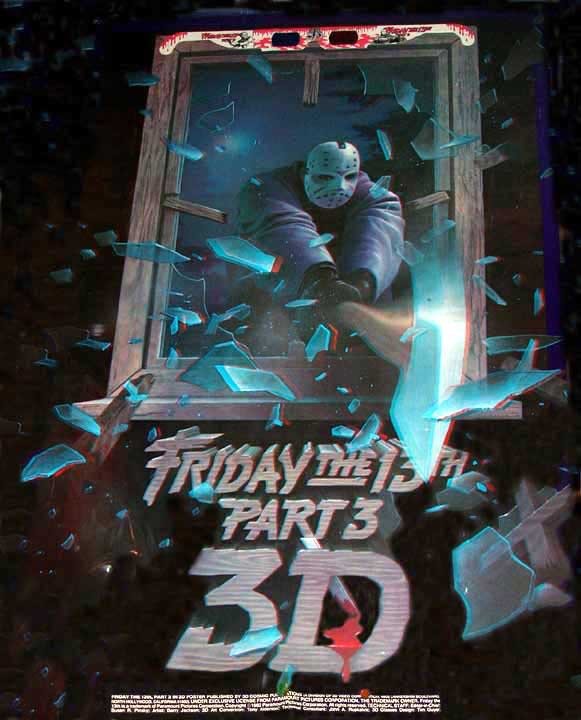 Aaaaah, the good old original.  I remember seeing this ad in the paper back in the day, and wanting to go see it something fierce. The outline of the killer, the woods, the too-young-to-live camp counsellors and the creepy lettering made for a great poster. Still way too young to be admitted into the theater for this, my friends and I snuck in to see it. (Oh, what a misspent youth!) It scared the cottage cheese outta me. This poster will always be a classic. Hmm, I smell Bacon. Oh well. 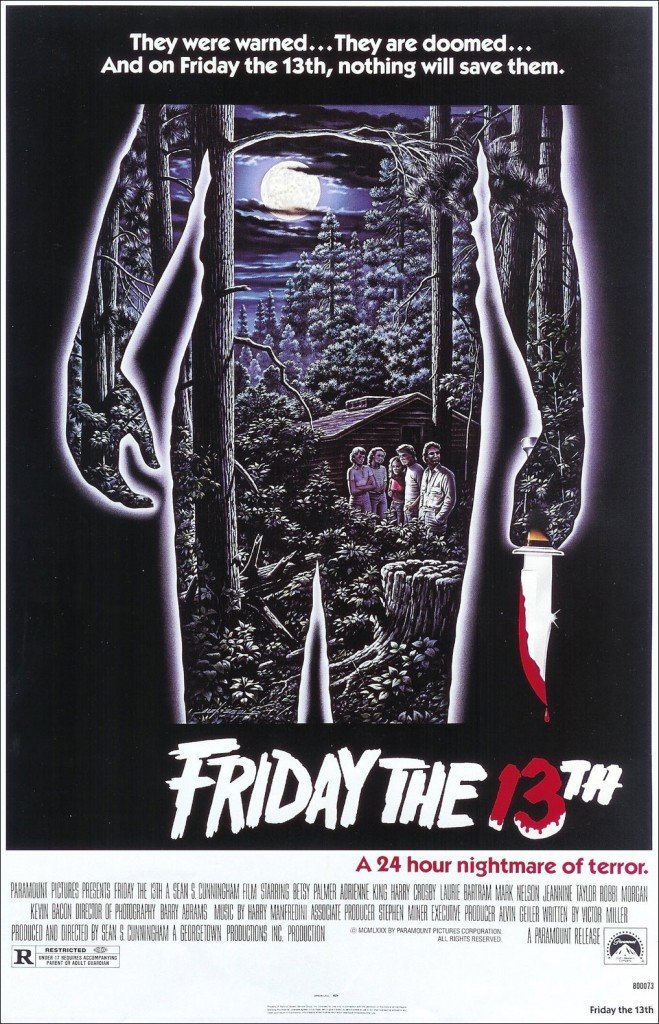 I’m going to pretend like there is no other poster for this movie. Even though the movie didn’t deliver on the New York end of it, this poster is genius marketing strategy. It’s just too badass. 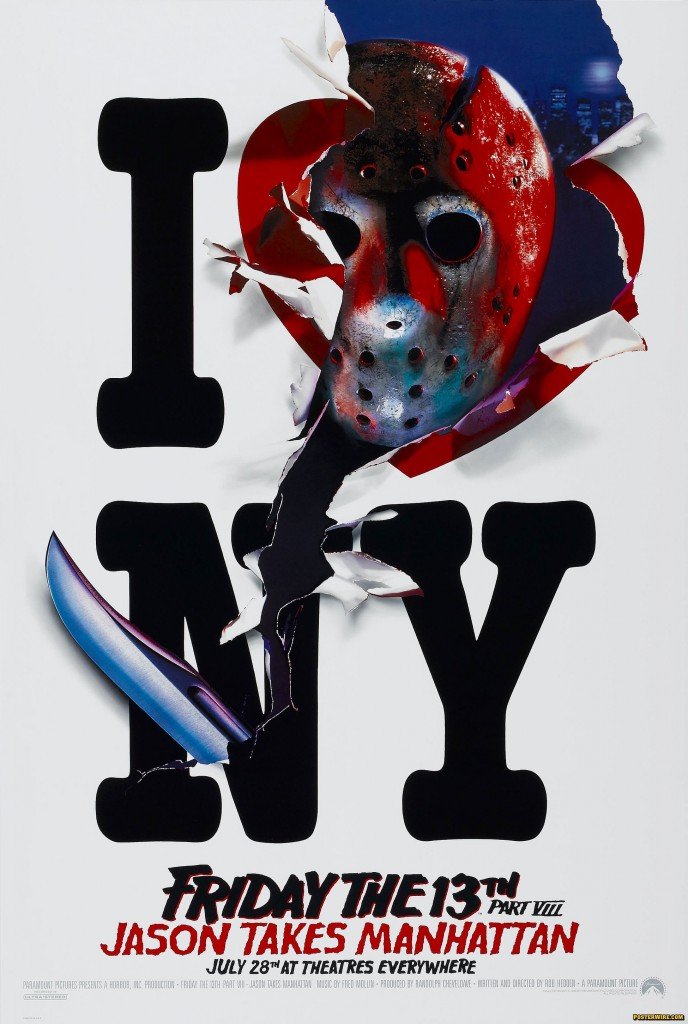 Elegant in its simplicity, this F13 poster  . . .  wait. Did I actually use the word elegant to describe a poster   -much less, anything – to do with a Jason movie? Well, yes, actually. By the time the fourth installment had come around, folks were ready to see big J get his comeuppance. And boy, did he, courtesy of some of the best effects work by Tom Savini ever put to film. A hockey mask, some blood, and the words “Final Chapter“. People came. People saw. Some people threw up at the machete head slide scene  – or at Crispin Glover. I can’t remember. 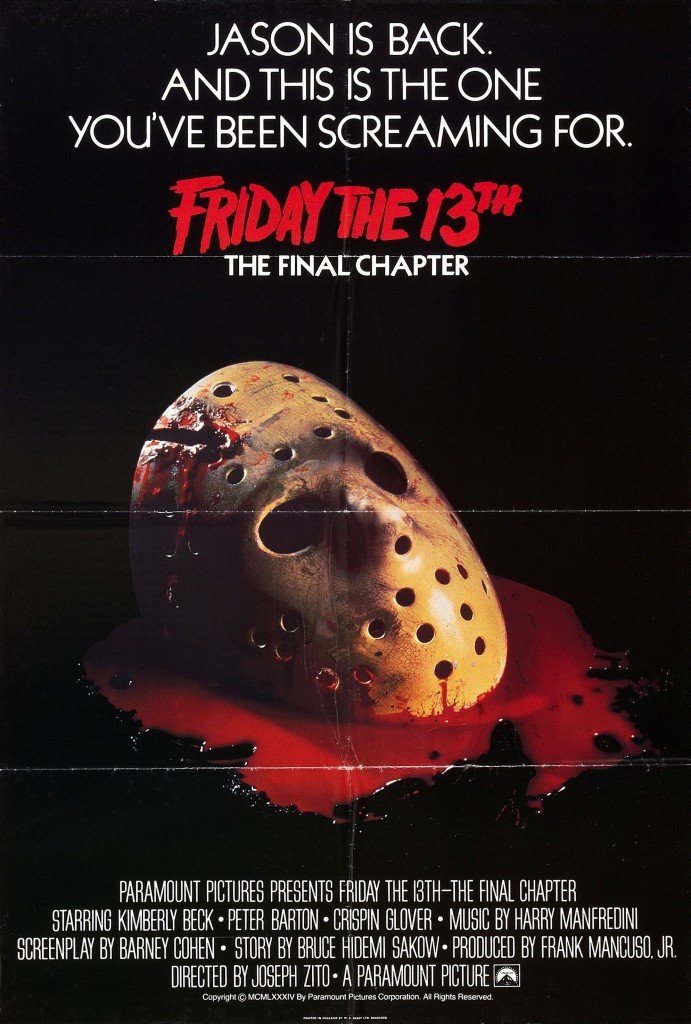 One thing Joe Zito and crew made sure of at the end of part 4 was that Jason was dead. You could see it in his eyes. So when I heard part six was coming, and it was going to be the real Jason and not some imposter like in part 5,  I quietly whispered, “Zombie Jason. Please be Zombie Jason.” Then I saw the poster. Something supernatural this way comes. This poster and this movie opened up a whole new doorway to where this franchise could go. (Unfortunately, this door slammed shut by the very next installment.) This ghostly image of the hockey mask, the grave stones, and so on  made me and others very excited to see this movie  – and it paid off. This is my favorite F13 movie and my favorite poster from the series. 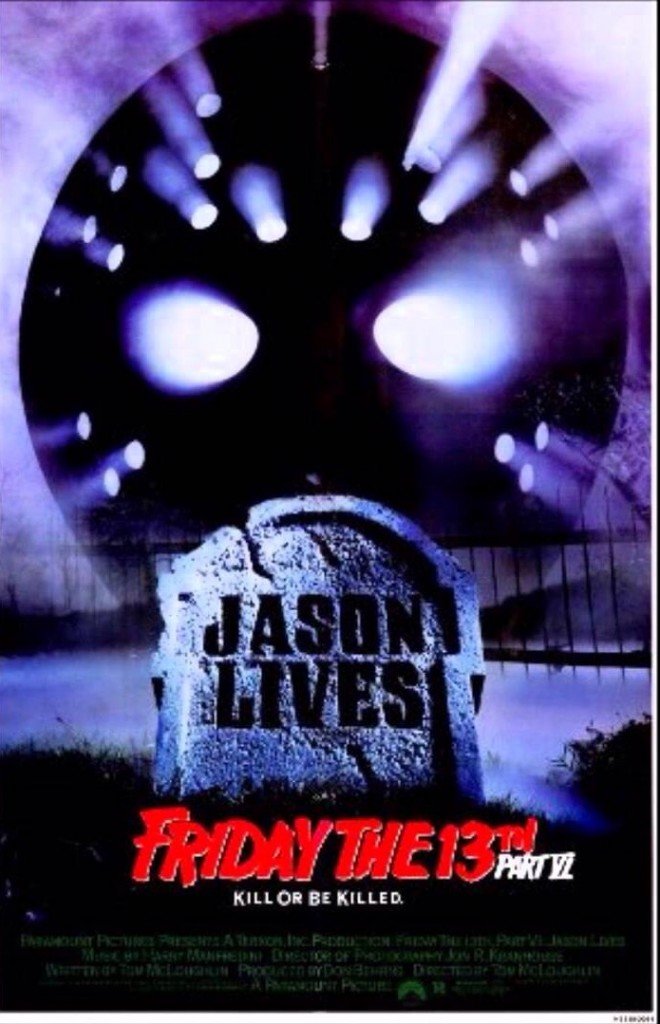 And that’s it! The top Friday the 13th posters, in my less than humble opinion. I hope this helps anyone struggling with the  fact that Friday the 13th is just around the corner. Just keep telling yourself,  “It’s just another day . . .  right?”

Oh, yeah, before I forget:  Crieghton Duke is an idiot.

Scream Team Releasing has been putting out some of the best indie horror in the biz the last few years – one of their earlier hits THE BARN came out back in 2016 and today brought the news that a much-anticipated sequel is finally making its way to horror fans eyes everywhere. Check out the […]

A Trailer And A Poster Make Their Debut For ‘Friend Request’

The last few years we’ve seen more then our fair share of “social media” based horror films – don’t know how you feel about our choices so far but – in my opinion, we’ve yet to get one that gets it right. Could director Simon Verhoeven’s effort Friend Request be the one that finally locks […]

Leave it to Charles Band and his gang at Full Moon Features to bring us some throwback horror fun with a twist that only they could dream up. What we have here is a trailer for ATTACK OF THE 50 FOOT CAM-GIRL – and it’s directed by Jim Wynorski – who any horror fan worth […]

‘I’m a man of all works, sir. When my Master says, “Krull, do this thing,” I do the thing, whatever it may be.’ And then there are the things Krull does that his master doesn’t tell him to do. Join this episode’s Grue-Crew – Whitney Collazo, Daphne Monary-Ernsdorff, and Jeff Mohr – as they experience […]