After a pilot as kickass as El Jefe, one wonders  how  Ash vs. The Evil Dead could keep up that momentum. After all, that pilot for the series was directed and co-written by  Evil Dead  creator Sam Raimi, who has publicly stated that he isn’t as heavily involved in the show at large beyond serving as a producer. This was the clear point where showrunner Craig DiGregorio (who has written for  shows like  Workaholics, Chuck  and  Reaper) and his staff had to showcase just how they could keep the spirit of Ash alive without Raimi looking over their shoulders. Luckily, the second episode Bait does all this with gusto, keeping the gore, comedy and character in tact without sacrificing that same energy that Raimi reignited the franchise with in the debut episode… for the most part.

Continuing where we left off, Ash (Bruce Campbell) is attempting to hitch his trailer to his reliable Delta 88 Oldsmobile when Kelly (Dana DeLorenzo) speeds off on Pablo’s (Ray Santiago) motorcycle to reconnect with her parents after her thought-to-be-dead mother returns. Pablo claims that Kelly took The Necranomicon with her. On their way to find her, they find a Deadite possessed version of Value Stop manager Mr. Roper (Damien Garvey) in the backseat, leading to a gory takedown that puts Pablo in the middle of the action as he and Ash foible with a broken beer bottle to take him down. While not as elaborate as some of the more ingeniously gory sequences from the previous episode, this introduces two factors  of equal importance for Ash vs. the Evil Dead; it sets up a sort of mentor/mentee relationship for Ash & Pablo and it shows that the series staff is willing to hurl just as much abuse at Campbell as Sam Raimi would. Seeing him covered in that gorgeous karo syrup and red food coloring felt completely in keeping with the  Evil Dead  spirit we were looking for. Plus, it’s nice to see Pablo nervously attempt his first Deadite killing, which only becomes more hilarious once the two have the awkward conversation afterwards. Nothing better for Deadite clean up than a moist toilette, eh? 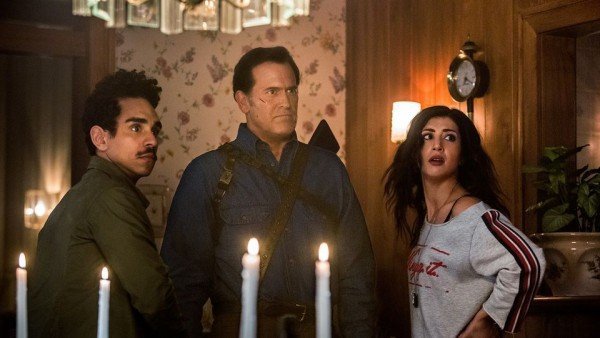 Ash and Pablo eventually arrive at Kelly’s parents’ place, gearing up to roar inside and kill some Deadites… only to find that Kelly, her father (Phil Peleton) and her mother (Mimi Rogers) are having a genuine conversation, making Ash and Pablo’s gung-ho gore covered intrusion all the more awkward. Still, Ash isn’t convinced by the seemingly normal behavior of Kelly’s mother, telling Pablo post-clean up that he suspects she’s playing a Deadite trick on everyone and will attempt to reveal her true form during dinner. The title of the episode comes from a gag involving Ash explaining to Pablo that he will serve as a lore to drag the Deadite out of its disguise. This plot point is admittedly a bit of a lesser predictable hump in the episode, in which most audience members-including those who have seen the Evil Dead  films and likely those who have only seen El Jefe-could probably see coming.  The ensuing dinner showcases a slow build up to the inevitable, teasing Kelly’s mothers supposedly shocking turn in a fashion that’s decently funny, but left me impatient more that rolling with laughter.

Of course, once we get the pay off of Ash punching her in the face, it all becomes worth it. This is especially the case for the true MVP of the episode Mimi Rogers, who relishes the Deadite performance and sets a precedent for anyone else to follow in her make up laden shoes. Her physicality and emotional manipulation are on point here, showcasing a powerful sense of deadly knowledge  that the Deadites have for true manipulation that even El Jefe couldn’t quite display in even its slightly extended running time. The moment in particular that pulls all of this off is when Rogers briefly reverts to human form to trick Dana into her arms, serving as both an homage to the lullaby moment in  Evil Dead 2  and a crushing moment of blow to Kelly that helps endear the audience to her character. Of course, all of this is followed by a pretty sweet head decapitation via chainsaw, with more of that glorious physical blood that felt more common here than in even the first episode of  Ash vs. the Evil Dead. 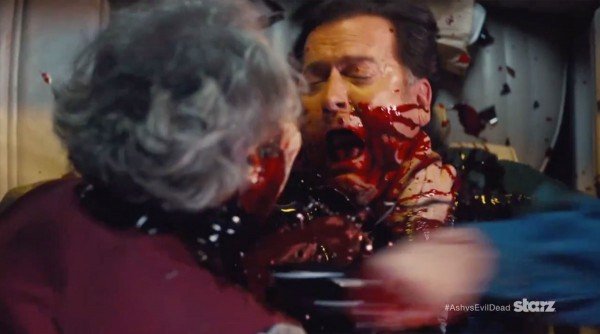 There are a few more subplots involved, but they either serve as set up or underwhelming tension. There’s a bit where Pablo reveals that he actually had The Necranomicon on his person the entire time and lied about it just to get Ash to help out his crush Kelly. This seems like  a set up for a trust issue between Ash and Pablo that could be a bit more intriguing given Ash’s itchy trigger finger, but it’s mostly tossed aside for the inevitable reveal of earlier which ultimately disappoints given the relationship wonderfully set up for these two. There’s also a bit more with Special Agent Amanda Fisher (Jill Marie Jones), showing her investigating Ash’s trailer park and linking him to the Deadites. This all gives her a solid start to an arc about tracking our beloved titular character down, but one that hopefully doesn’t drag out the misunderstanding of Ash being an intentional Deadite unleasher for too long.

Overall, “Bait” is a worthy continuation from the pilot, answering the major lingering question of if those outside of Sam Raimi himself working on Ash vs the Evil Dead  could keep the spirit alive without him with solid results. It’s not just with the comedy either; the atmospheric moments showcase how director Michael J. Bassett can imitate Raimi’s style while keeping updating it for the sake of the show. It almost makes up for his work on Silent Hill: Revelation 3D… almost.  Now the question is, will Ash vs. the Evil Dead  be able to keep the momentum running for another eight episodes? Only time will tell.

Kill of the Night:  Mr. Roper by broken bottle/passing car

Best Ash Line:  “You’re kinda like a young me. Deadites ruined your life, and you’re hot as hell.”

Next Week on Ash vs the Evil Dead:  “Books from Beyond”, which promises to have Ash & company meet up with his bookstore buddy and a proper introduction to Lucy Lawless.

One More Thing:  Kelly seems surprisingly chill despite her parents being dead. At least she was somewhat concerned about their burial.

Happy Halloween, Grue Believers! But more importantly, Happy 1st Birthday,  Ash vs Evil Dead! Yes, one year ago today “El Jefe” premiered and sent us on the wild ride that has been this series. Of course, like any one year old,  Ash vs Evil Dead  is celebrating it’s day of birth by skinning someone alive. […]

First off Grue-Believers, let me apologize for the long delay. Soon, very soon, you will all be able to call me Master. I am in the midst of my last class for my Master’s degree and between that and my every day job my life has been consumed. Don’t think I’ve forgotten about you, like […]

Hello, Grue-believers, how the heck was your holiday weekend? Mine was filled with Fantasy Football goodness while, at the same time, wondering why Dragon-Con had to be scheduled the same weekend as all my drafts. I will have to do something about that next year. Let’s get back to the task at hand. At this […]