Let me first apologize for the lateness of this review. Life has been pretty busy but in a good way. Anyway, Scream Queens is back after taking a one week break because of  the World Series. Happily one week was all it took for the Royals to dismantle the Mets (Sorry, Santos, but as a Phillies fan I could never root for the Mets). Did I miss Scream Queens? I would say I missed the “Chadisms” but The Walking Dead has been nothing short of amazing, so I have found contentment in that. Let’s have a look and see if Scream Queens continued to push forward or if it is running out of steam. This review does contain spoilers, so watch the show before reading.

The episode opens with a funeral at the Kappa house for Chanel No. 2 since her body was finally found. Giving the eulogy was none other than Chanel, who did not hide her disdain for No. 2; she even told people that her parents were so happy she was dead that they couldn’t attend the funeral because they were celebrating on a cruise. This made me sad because  I got my hopes up when I thought I may see Charisma Carpenter, but I was let down.

The next scene had some comedy and I am betting one line in particular brought a smile to one of my favorite people’s face. Doc, I know you LOL’d when they broke out the Ouija board and Hester quipped that they should use it, didn’t you see the movie, and Chanel replied “The movie Ouija? No, no one did”. They wanted to contact No. 2 but Chanel said she was probably busy getting “Eiffel Towered” by Satan and Hitler. Chanel did ask the board the important question we’ve all been asking ourselves for weeks:  Does No. 5’s vagina have teeth? Actually I’m pretty sure no one was wondering that. This scene had its moments and did provide some giggling.

Now we know Gigi is behind the red devil murders and I can only assume that we pretty much know the identity of one of them, Boone Clemens (Nick Jonas), who I am assuming after this episode may in some way be related to Gigi. Grace is out with Gigi trying to update her 80’s wardrobe and refers to her as Brenda Walsh. If you didn’t get that you are either too young or are  one of the few people who did not watch Beverly Hills, 90210. That’s right, the Thug watched  Beverly Hills, 90210!  I loved me some Jenny Garth and even sported the Jason Priestly side burns in college. Don’t judge me! 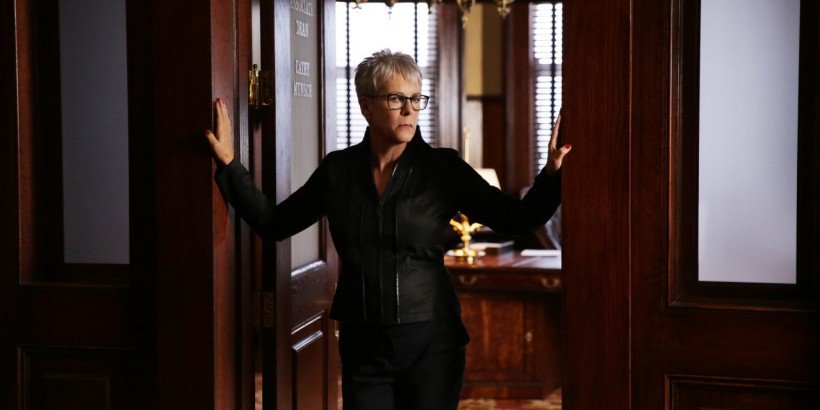 Ultimately this episode suffered. For me, there was not enough of the Rad one. We did get a scene where Chanel walks in on him with a goat named Randy. He explains it away as because of  his lactose intolerance and that he needs the goat milk to give him his protein. Besides, he is upset knowing that if he eats just one bite of ice cream, he will fart a lot.
We do meet a new character, a former Kappa sister named Feather McCarthy, played by Tavi Gevinson. She stole Dean Munsch’s husband, who was her Beatles  101 professor. Through flashbacks we see how it happened and how Dean Munsch’s psycho side emerges. Later we find out an elaborate plan that Dean Munsch hatched after first meeting Feather. Munsch murders and disassembles her ex and brilliantly frames Feather for it.

Other giggle-inducing scenes included the paper’s headline after the initial arrest of Munsch stating “Police Finger Dean Munsch”. After the Chanels hatch a plan to kill Chanel, she is visited in her dream by No. 2, who wants to make amends with her by apologizing for sleeping with Chad but “she really needed her tube stuffed” and telling her of the Chanels’ plan. Chanel uses this as fuel to take hold of her leadership reigns and get the group back together and expose the “real killers,” Grace and Zayday. She also noted that all rat poison would have done is make her throw up, thus doing her a favor by making her skinnier.

Ugh, I knew it was bound to happen with Ryan Murphy attached to it. Scream Queens is losing its luster. I’m invested, so I will watch the last five episodes in hopes of this one just being a dud, but I’ve been Murphy’d before and it appears as though it is happening again. The episode was directed by Barbara Brown and ruined – I mean written – by Ryan Murphy. Scream Queens is running short on wit and some of the jokes are becoming stale. Leading up to this episode, I was enjoying the series  and look forward to a hopeful turn around next week.

This week’s  Ash vs Evil Dead  has a solid double meaning for it’s title. While Pablo has the power of the Necronomicon stuffed inside of his body, Ash, Ruby, Kelly, Linda and Lacey are trying to protect him while a barrage of locals trying to get into Ash’s old house. Lest we forget, someone else […]

Preacher  pulled a double whammy with its first week. 24 hours after “On The Road” aired, we got the thrilling conclusion to Jesse Custer (Dominic Cooper) and The Saint of Killers (Graham McTavish). Despite his attempts to use Genesis on the cowboy on a rampage, Jesse is powerless. Well, it’s a good thing that axel […]

“The Walking Dead” S07E01: The Day Will Come When You Will Not Be

Grue-believers, WOW, just WOW! The time we were all waiting for has come and gone. The season premiere of The Walking Dead Season 7 was in a word “Awesome!” It evoked a wide array of emotions from its audience as displayed in the premiere follow-up of The Talking Dead. The same can be said for […]