The Starz horror TV series Ash vs the Evil Dead grabs its audience’s  attention quickly within the opening  minutes as Bruce Campbell shakes and grooves to Deep Purple’s Space Truckin’. “One more for Bubba,” Ash slyly references another film early in the opening of the pilot episode “El Jefe” to let the audience know what they are in store for. Sam Raimi takes Ash Williams to new comedic, womanizing highs as the Deadites are back to raise some hell. The tone and style is perfectly suited for the serialized TV format, as Ash teams up with two of his co-workers and a police woman and encounters a mysterious demon hunter to defeat the rise of the familiar foul mouthed, violent and hyper-active creatures from Raimi’s deranged mind. Ash vs the Evil Dead is raw, kinetic and bloody as hell, just as would be expected from an Evil Dead film. It’s all here complete with Raimi’s signature camera stylings, amazing cinematography and gruesome special effects. And Bruce Campbell still has it. 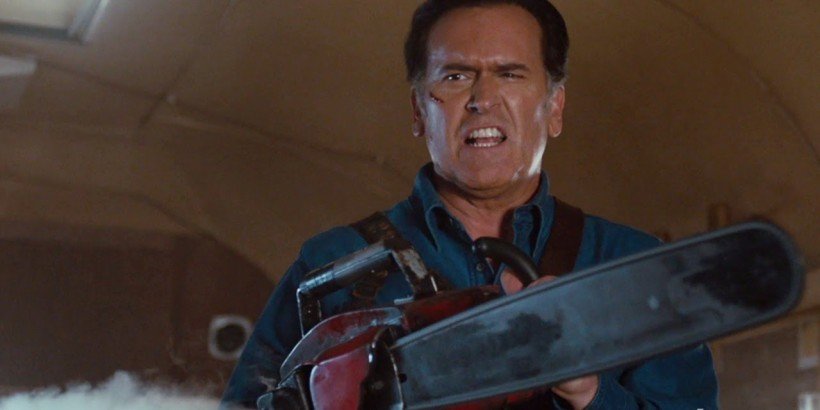 Debuting October 31, 2015 on Starz, Ash vs the Evil Dead is a must-see Halloween treat for horror fans.

Catching up with Ash Williams thirty years after surviving the first attack of the deadites, the script re-introduces the character with all the delirious, outrageous traits remembered from Evil Dead (1981), Evil Dead II (1987) and Army of Darkness (1992). Zipping directly into the details, the opening reveals how a night of excess with a special lady may have inadvertently unleashed the Evil Dead back upon the world. Ash wastes no time devising a plan to high tail it out of Dodge. But before he can split, Ash is forced to team up with two co-workers, Pablo (Ray Santiago) and Kelly (Dana DeLorenzo) to fight off the Evil Dead’s attacks. 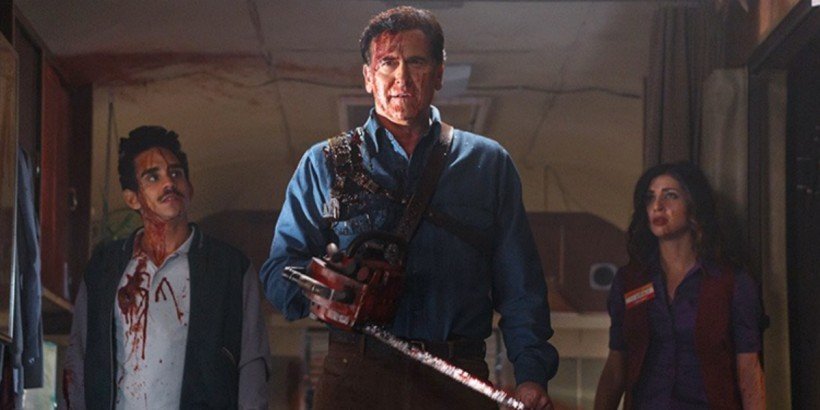 Ash’s influence also unravels the life of police officer Amanda Fisher (Jill Marie Jones) as she is called to a disturbance involving a young lady from a flashback that Ash has early in the episode – now fully possessed by the deadites. She later runs into a mysterious woman who suggests the horrible visions she is now seeing are indeed true even though no one else sees them – just yet. That woman is Ruby, and is played by Lucy Lawless.

For those who are wondering if the TV show can recapture the magic from the original trilogy, rest assured, that zany, whimsical but horrific tone and style is abundantly present. A scene where Ash is bashing clay flower pots over his head trying to knock free a possessed little doll from tearing off his face feels ripped right out of the frames of Army of Darkness. The POV camera zooms through a parking lot towards Pablo and Kelly as they struggle to start their motorbike mirrors the signature styling originated in Evil Dead. And, best of all, the deadites jerk and slide around with a fond remembrance and reverence to Evil Dead II. It’s all here and the show never disappoints. 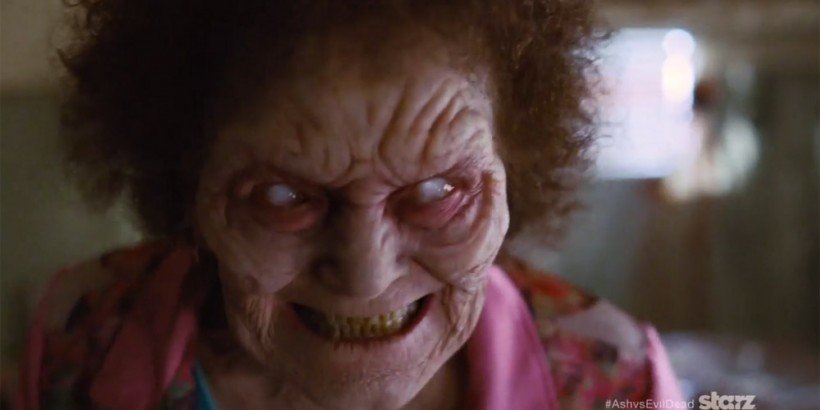 And Ash vs the Evil Dead is as gory as can be imagined. Heads explode, blood splatters and severed limbs fly. In here, crimson is the shade of laughter. All the groovy gore culminates with the beheading of Ash’s neighbor Vivian, and the red stuff flows freely from the exposed pulsating arteries. Even the aforementioned possessed doll explodes into a giant splotch of cardinal colored goo. Every attack results in characters drenched in blood and gore. It’s all fantastic.

The first episode of Ash vs the Evil Dead is directed by the man behind the entire franchise, the man who gave cinematic birth to Ash Williams, cabins in the woods and deadite armies aiming to take over the world. That man is Sam Raimi, and he’s returned to the franchise that started it all for him and his amazing career, and he never misses a beat. He’s as confident in these shoes as ever before, perhaps even more so, and he’s overseeing it all with a increased visual arsenal and a more balanced rhythm. It is impeccable. The television format proves ideal for his approach to the story, with a rousing pre-credits introduction to the outlandish conclusion that leaves the audience hungry for more. 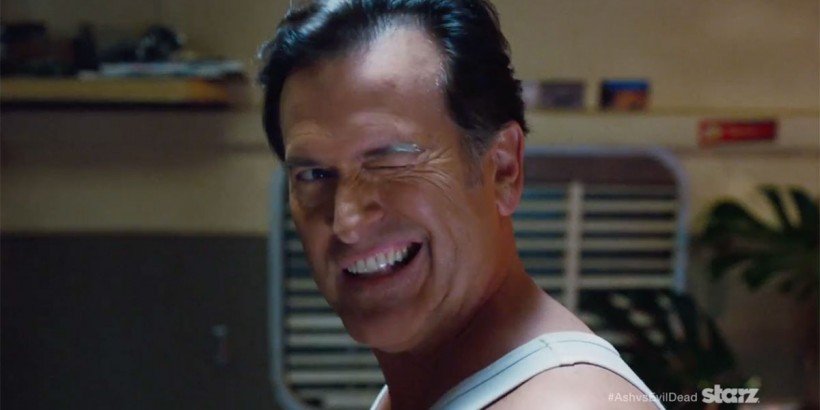 Ash himself, Bruce Campbell, is also back, providing an eccentric and comical self-referential look at his character 30 years later. Even though he is thirty pounds over weight with a mouth full of dentures, he still has the swagger and misplaced self-confidence he used to battle the demon hordes, and perhaps more importantly – score with the ladies. Campbell’s Ash also gets into some groovy action scenes featuring his trusty chainsaw. If there was ever any doubt if Bruce Campbell could recapture the tone and slapstick of Ash Williams, never fear, he does so effortlessly and brilliantly. The hero is reborn.

Ash vs the Evil Dead is a horror fan’s dream come true, it is the first true horror television show. All the other are amateurs. Wannabes. Pretenders to the throne. Ash vs the Evil Dead is the real deal, bloody, violent, raw and hilarious. Hail to the king, baby, Ash is back! Sam Raimi and Bruce Campbell are spot on to the expected tone and style and panache an Evil Dead series demands. They are just as inspired and absurd as they were with the Evil Dead and Army of Darkness movies. The music is perfection. The gore is splatter-riffic. The set up is quick and to the point wasting no time getting to the gore, comedy and action – as if the creators actually know what the audience is craving. Imagine that. Ash vs the Evil Dead is a triumph. Bring on more! Groovy. 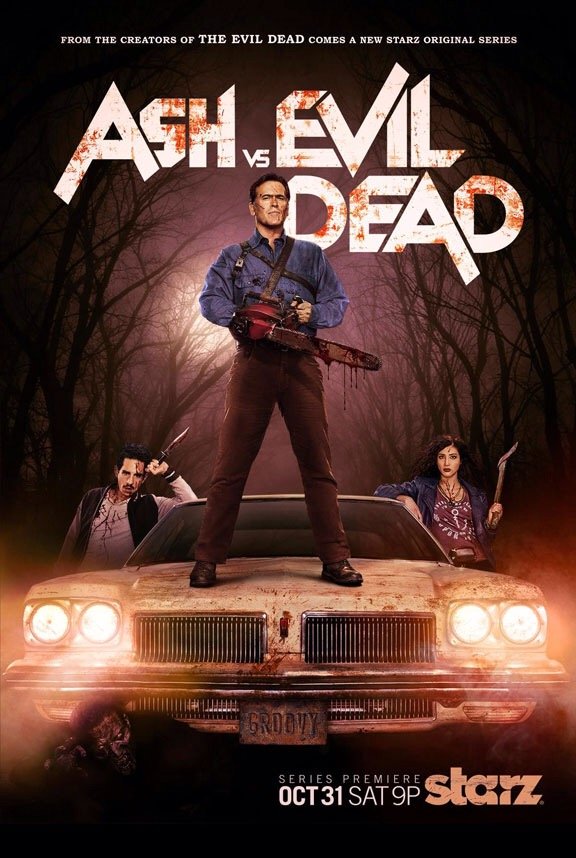 Lund Fantastic Film Festival — a genre-film fest in Sweden focusing on top-notch horror, science fiction, and fantasy movies from around the world —  has scheduled a hybrid approach for its 2020 version. Most screenings will be online through Spamflix with a select few in-person screenings during the fest’s October 28–November 1 run.   Lund Fantastic […]

Column: Necrospective – Insight Into Horror Soundtracks You Need In Your Life

*A quick note of introduction from Dave Dreher*David Maynor – one of our Gruesome Music family – pitched this idea to me in a conversation recently – what if he were to dig around and find buried gems, things like soundtracks, that have been long forgotten. A great idea, right? I told him so and […]

Since its announcement – horror fans have quietly been waiting for news on the upcoming Greg Nicotero produced, Shudder airing return of one of the most iconic horror films ever. Yep, of course, I’m talking about Creepshow and while little tidbits of news have filtered in – we’ve yet to get any major announcements – […]