Whoa, man! If 70’s exploitation, gore-styled films are  your thing then Headless is going to going to deliver what you grave  in blood-soaked spades. I have always loved those grind-house films from the 70’s and 80’s that some directors are trying to recapture now with Deathproof, Machete and Planet Terror  as  prime examples. So, when I fired this baby up and saw the super cheesy trailer for Wolf-Baby, I was really excited to see what the main film offered. I will be perfectly honest, in the first ten minutes, I was so pissed off at Headless I almost punched my hand through the TV screen. However, I pressed on, my rage subsided somewhat and I actually found some things within Headless that deserves to be commended.

Headless revolves around a killer I will call Skullface (Shane Beasley) who hunts down women while wearing a skull mask and kills them in the most disgusting ways imaginable. You ever wonder what it looks like when someone eats an eyeball, well you will get an idea here (Looked like an exploding Cadbury Egg to me). Ever wonder what it would look like to skullfuck a decapitated head…well this movie shows it…explicitly. Over and over… Basically this is how Headless starts out and, with no context to anything, I became so enraged that I was about to hunt down director Arthur Cullipher and writer Nathan Erdel and slap the ever loving shit out of them. 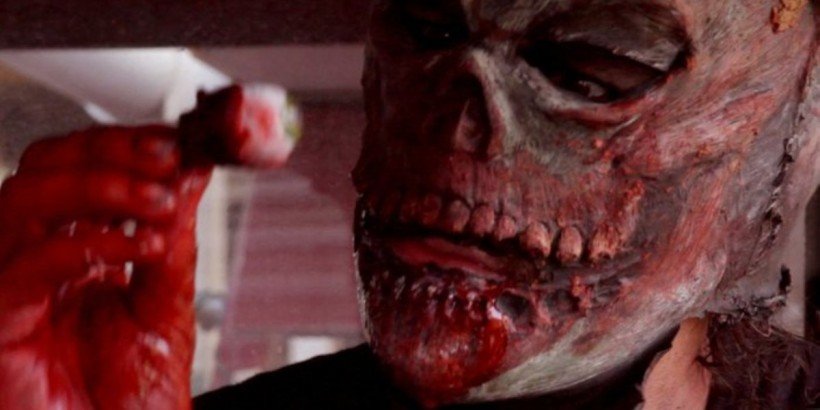 When Headless starts, we immediately see Skullface being directed by a small headed child, performing grotesque mutilations on a dead female. He then decapitatis another female and skull-fucks her head. We cut to some random drunk girl coming out of a door and walking down a street. She hears a cat and tries to find it. Guess what? Not a cat! It is Skullface and he kidnaps her. Again we are treated to an overly long torture scene. All of this happens in about the first 10 minutes of the film with no explanation  whatsoever as to what is going on or why anything is happening. Honestly, it just looked like the film makers were trying to just be perverse and disgusting for the sake of doing so and that the whole movie was just going to be a bunch of random scenes of the killer just eating eyeballs, skull-fucking and wiping blood all over himself. Cue my inner rage.

Fortunately, the movie finally does focus in (somewhat) on our main characters a bit more. We have Jess (Kelsey Carlisle) who is the sweet girl having to deal with her dead beat boyfriend Pete (Dave Parker), her friend Betsy (Ellie Church, who does a FANTASTIC job as a secondary character) and her  sleaze ball boss  named Slick Vic (Brian Williams) who owns the roller rink. The film does suffer a bit however by flashing to some random scenes that do not connect to the main characters at all other than Skullface being a skull-fucking killer. A prime example is the hitchhiker scene where Skullface chases the hitchhiker around on his property, which by the way is a setting that the main characters should have been in more during the film. 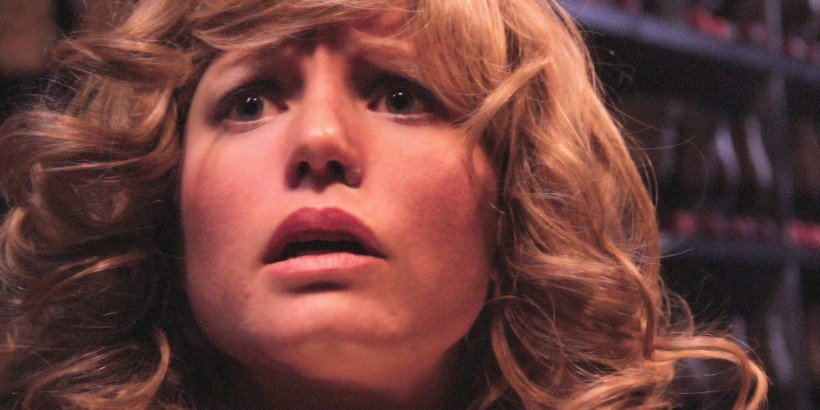 The film makers eventually do try to give the viewer insight as to why Skullface is doing the things he does and goes heavily  into his backstory via flashbacks as he kills his victims. I appreciate the effort to do so  as it does help negate my initial problem I had with the movie looking like it was going to be a bunch of gore scenes for the sake of gore. However, these flashback scenes have issues of their own. The big one being, this will make me look a bit like a hypocrite here, is that they try to give too  much context and backstory into the why  Skullface does what he does. While, I do like to have some hints as to why he kills the movie goes so in depth as to try and explain it, it seems the movie veers away from its grindhouse roots and tries to be more psychological analysis film of some sort. I think they could have conveyed what they wanted in much shorter segment(s). They do so many of these flashbacks and random scenes that we really don’t get to our main character Jess and Betsy until well into the film.

Once we get to where we focus a bit more on the main cast, I find  myself enjoying the film much more as the film seemed to be more focused and as a viewer I can  center my attention on things a bit better. There are still spots however where this does get interrupted, reverting back to skull-fucking…for way  too long and it started pissing me off again. 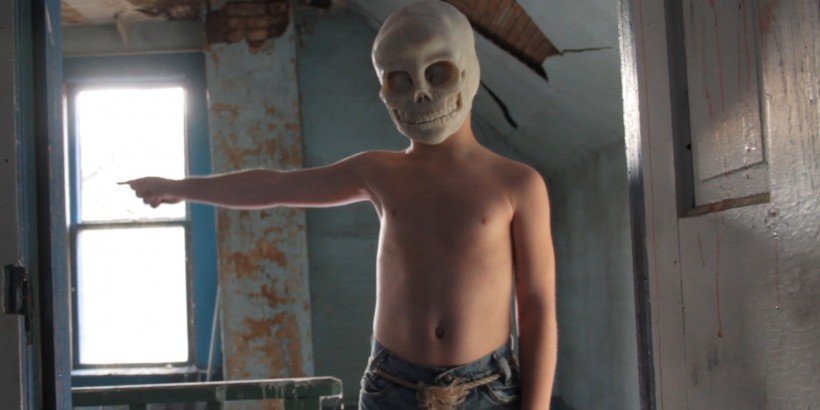 All these scenes, which took up valuable film time, could have been trimmed down and the extra time could have been used to better build up events and circumstances around Jess and the core group of people around her. The prime examples of what to trim down would have been the flashbacks. The scenes of the hitchhiker running around on the killer’s property also could have been used on Jess & friends instead. The poor  allocation of time also hurts the ending as well as it fells that  some circumstances in the end happen too fast without it being built up properly. Like Jess’s boyfriend suddenly being such a good guy and turning from a total douche to a heroic self-sacrificing guy of wisdom. I don’t  buy it.

The ending itself is a bit perplexing as well as it takes an even more bizarre left turn that was kind of interesting to see but also it didn’t fit into the more grounded, albeit craziness sense of the film. However, I will give this a pass as those old grind-house films would always have some strange logic gaps in them as well and this ending fit the spirit of that. 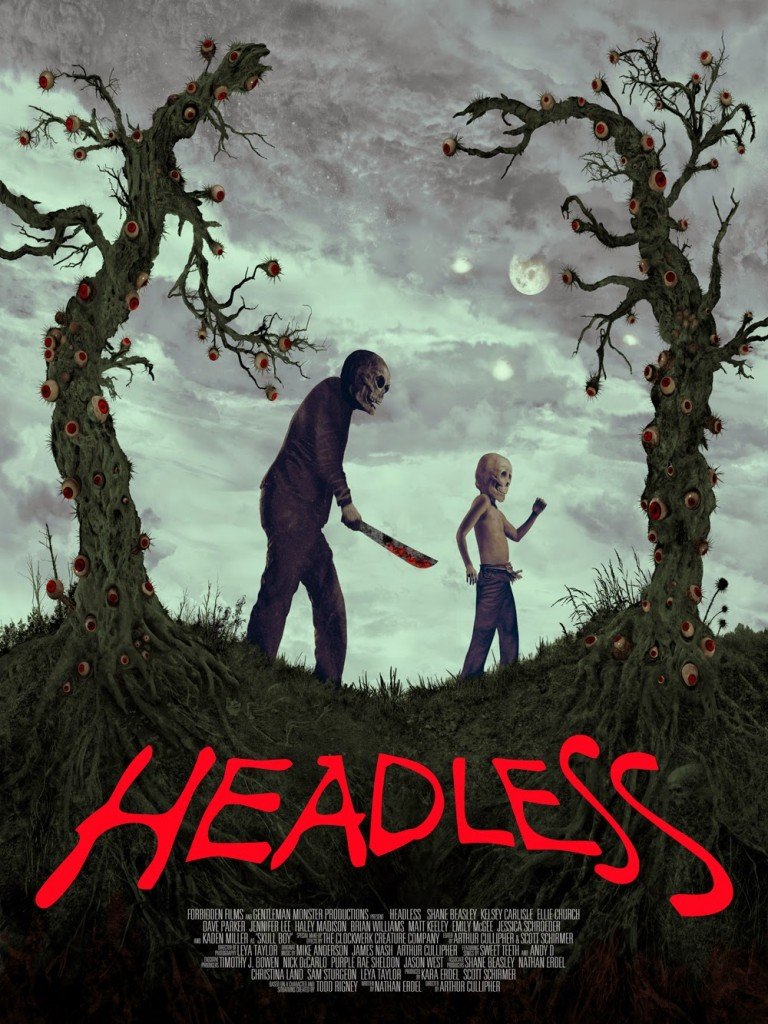 Headless is very much a movie of extremes. Whether it is for the gore and the perverseness of the killer or to the excessive need to try and explain why  the killer does what he does. While I still think Cullipher and Erdel just wanted an excuse to show a bunch of nasty stuff on screen, I commend them for trying to eventually give it some context even though I felt they tried too hard and the overall integrity of the film suffered for it. But, hey, at least I don’t want to slap them anymore. Once my anger subsided, I saw Headless had a lot of ideas that could have really made the film a true grind-house treat. Skullface and the actor who played him did a fantastic job, the location and look of Skullface’s home was ideal if underused a bit, the gratuitous use of naked ladies was great, the practical effects were mostly well done, a little chattering skullhead kid, and the general feel and concept of the movie had all of the right ingredients to make it great. However, a misuse of time and an uneven pacing holds Headless back by a bloody nose.

“The Narrative of Victor Karloch” (2012) and “The Mill at Calder’s End” (2015): Puppetry Brings Ghost Stories to Chilling Life in “The Spirit Cabinet” Short Films

Using bunraku puppets and in-camera effects, director Kevin McTurk has crafted two short supernatural horror films that are marvelously rendered and meticulously detailed. These first two installments in his The Spirit Cabinet series are imbued with a sense of old-school wonder, traditional special effects, and classic storytelling, and at the same time, they also feel […]

In the supernatural horror short The Maiden, real estate agent Lucy Wells (Alia Raelynn) is determined to sell an old house – and desperate enough to forge ahead even when a former resident makes it terrifyingly clear that she considers Lucy a trespasser. Writer/director Michael Chaves has forged a great-looking, suspenseful film that fans […]

It dawned on me while watching Willy’s Wonderland that Nic Cage has become this generations William Shatner – he has become a parody of the very acting style that made him famous and in case you’re wondering – that’s not a particularly good thing. You can probably already guess where this review is heading but […]