The Last Witch Hunter from director Breck Eisner (The Crazies) and starring Vin Diesel wants to be a great movie, it sincerely works hard to establish a world where witches live in the shadows, secretly plotting to take back their world while an immortal hero, Kaulder, keeps their efforts at bay. The film buckles and splinters under the weight of its own exposition. The script is saddles with the overt desires to world build on top of world building, adopting the mindset present in many of the current superhero trend of establishing everything surrounding its lead protagonists and their extended stories and characters. Unfortunately, again, much like its superhero brethren, The Last Witch Hunter also forgets to establish its villain to make the stakes, the conflicts and the struggles worth the investment. Vin Diesel sells his every second on the screen with his charisma alone but nothing else matches his screen presence. In the end, The Last Witch Hunter makes the worst mistake it possibly could — it is dull to a fault, a snore-fest.

The story for The Last Witch Hunter follows its hero Kaulder (Vin Diesel) 800 years ago as a band of witch hunters take on the witch queen responsible for unleashing the black plague upon the world. Kaulder strikes the killing blow and ends up cursed by the dying witch to live eternal, never to die, never to know peace. Cut to modern America, where Kaulder is the weapon of a secret society working with the witches to keep a fragile truce in place leaving the witches to live in the underworld, in the shadows, unknown to the public but safe from Kaulder’s fury.

As his handler, a man known as Dolan 36th (Michael Caine) is set to retire promoting Dolan 37th (Elijah Wood) to the role. Before he can enjoy his rest and relaxation, his placed under a curse to hide the true intentions of a powerful coven of witches seeking to resurrect the witch queen. Kaulder turns to a dream walker named Chloe (Rose Leslie) to peer back into his long forgotten past for clues to what the coven needs to succeed in their devilish plans.

All this nonsense is made palatable by the sheer magnetism of the film’s star, Vin Diesel. The story does not require terribly much of him other than to wield his fiery sword and look menacing. To this, Diesel excels. He is charming at it as well. And he almost makes the audience feel his pain when he discovers the double cross slapped against his face. Almost. He also sports a mighty fine century-old beard early on that is…unique for him, to say the least. Whatever. Regardless, The Last Witch Hunter is a film that should have been a terrific vehicle for Diesel playing to his strengths and making the most of them every chance they get. Sadly, he is just not enough to save the film all on his own.

His co-stars are a mixed bag, some giving it their all, while others are just hanging out. “Cashing their checks” as they say. Michael Caine is extremely guilty of this in The Last Witch Hunter taking his own “Jaw The Revenge” advice. To be fair, he is playing his Alfred Pennyworth character once again, just thing time in the cloth. Elijah Wood surprisingly checks out midway through the film. At first he seems invested and witty, but toward the last act he begins to wander and run on auto pilot not bringing much to his role. Rose Leslie however far outreaches her role as Chloe the witch with the power of a dream walker. She carries her emotions clearly as she struggles between her heritage and her powers and possibly betraying her own kind. Even at their worst — looking at you Mr. Cain — the cast is fun and lively. Too bad their is not much for them to do.

Visually, The Last Witch Hunter has some stunning moments. In the witch prison, there is a “Sentinel” that drags convicted witches off to their prison cells. It look ferocious and frightening. The film is filled with transformations and shape-shifting that is amusing and well-designed. The movie  builds its witch-filled world in softly lit magic hues and fascinating, fantastical creatures, weapons and locations. The film relies a little too heavily on its tree and roots effects however bordering on repetitious exposure to the vine entangled threats. The film is sweet to look at the very least.

But still the film manages to be a bore, dull to the core. This is mostly due to the extraordinary amount of exposition The Last Witch Hunter needs to accomplish to set up its world and settings. The reveals into the witch world is rarely natural, feeling forced and contrived. This hinders much of the action and plot development as they get mired into the stop and start rhythm. It lulls the viewer into a bored slumber. Too bad. 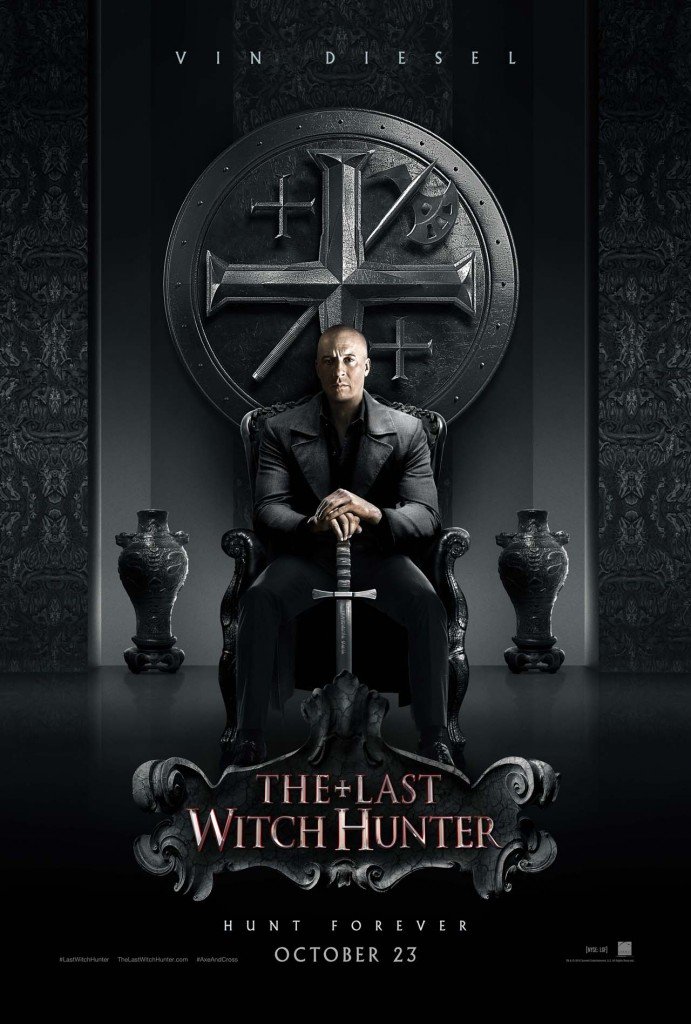 The director, Breck Eisner, has a number of shining moments throughout The Last Witch Hunter. There are brief glimpses into the future world of New York City under the rule of the witch queen that are hauntingly beautiful and poetic. Eisner has an interesting style to his storytelling and composition that is promising. He and Vin Diesel make a good team as well, when the two are gelling with the better sections of the script, the film begins to show signs of becoming something far more entertaining and eventful.

The Last Witch Hunter is neither the exciting extravaganza it sets out to be nor the amusing train wreck its trailers suggested it might become. Instead, the film is a bore, a dull exercise in pointless mayhem. It is a low rent super hero film dressed up as a horror fantasy film filled with witches and the supernatural. Vin Diesel takes the material seriously lending his bewitching charm to his role as Kaulder. To his credit, he almost succeeds in saving the film single handedly. But the script is exposition heavy boring its audience with explanation and back story that dilute the sensation of the main tale. Despite great effects and a terrific eye to the direction, the film droops, falling over in a bland mess of a movie.

The Australian feature An Ideal Host (2020) is a horror/science fiction/comedy hybrid that delivers on all three fronts.  Liz (Nadia Collins) and Jackson (Evan Williams) are planning the ideal dinner […]

Exotic Balinese jungle locations, a seven-foot-tall zombie king, and a six-foot-eight zombie queen – What more could you want in an action/zombie/comedy/adventure film? The upcoming zombie film  Dead Squad has […]