The latest in the found-footage supernatural franchise, Paranormal Activity: The Ghost Dimension, presented in 3D no less, is a frustrating, lackluster entry into the series, shepherding the story off into its supposed final chapter with a dreadful, groan-worthy thud. It simply stinks. Damn. As a huge fan of found-footage genre, 3D films and the Paranormal Activity franchise in general, The Ghost Dimension is aimed for a target audience that draws me as its poster child. I should be exiting the theater as would a gleeful child with a Halloween basket full of treats. But, sadly, no, I’ve been tricked in the worst possible way. Director Gregoy Plotkin, along with writers Jason Pagan & Andrew Deutschman and Adam Robitel & Gavin Heffernan dish the same old candy from two years ago trying to pass it as “new” by wrapping in a nifty 3D wrapper and claiming it will tie up all the loose end and explain all the mysteries. Yeah, that does not happen. The 3D rises to the occasion only briefly, in a few spots, while the only questions that are answered are the ones that fans of the series have already surmised — or, worse, already know — from the previous entries. Smooth move.

The story starts off with yet another family moving into a home only to begin experiencing strange noises, smells and disturbances. Their daughter soon begins to play with an imaginary friend named Toby. And, they discover VHS tapes full of images of Hunter, Katie and Kristi. It is a bad case of “Been there, done that.” This go around, the family also discovers a custom video camera that is able to capture the mysterious unseen-by-the-human-eye forces on film. This gimmick is creatively displayed on screen in 3D for extra kick and amusement, which often works to the film’s benefit, providing the movie with its best moments. 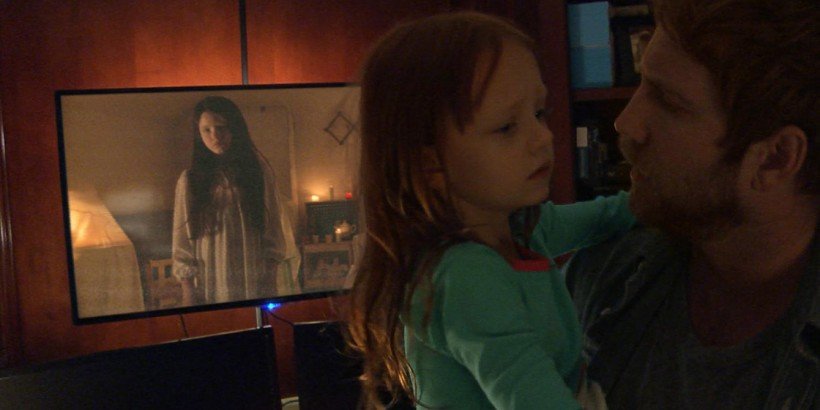 The problem is the script and the characters spend most of the film catching up with what the audiences, especially fans of the series, already know: Toby, Kristi & Katie and Hunter. The result is sheer boredom. Even the 3D, which can add an extra shock value, does not distill the complacency of the script as it retreads old ground. It also fails to bring in some of the more interesting elements added into recent previous chapters. There is no sign of the witches and covens seen in part 3 and part 4. No sign of Jesse from The Marked Ones. No sign of the adult and far more dangerous Katie Featherston. The film focuses on the young versions of Katie and Kristi from Paranormal Activity 3 as they continue their training at the hands of a “trainer” of some sort as seen in the video tapes.

What Paranormal Activity: The Ghost Dimension gives its audience plenty of is Toby. There is no mystery here. There is little question to what is haunting the house, it is Toby. And the film labors through what Toby does – all over again. The entire concept of what made Toby frightening in previous films is watered down to a handful of cliche-driven cues: moving chandeliers or wind chimes, loud bang and noises, bursts of winds and shadows moving about without explanation. The 3D is used to color in the blanks, to give Toby a visual foot print and shape – but Toby remains the same Toby from before – therefor the effect adds little to its mystery. Somehow Toby is far less intimidating and scary in this chapter, giving further credence to “less is more.” 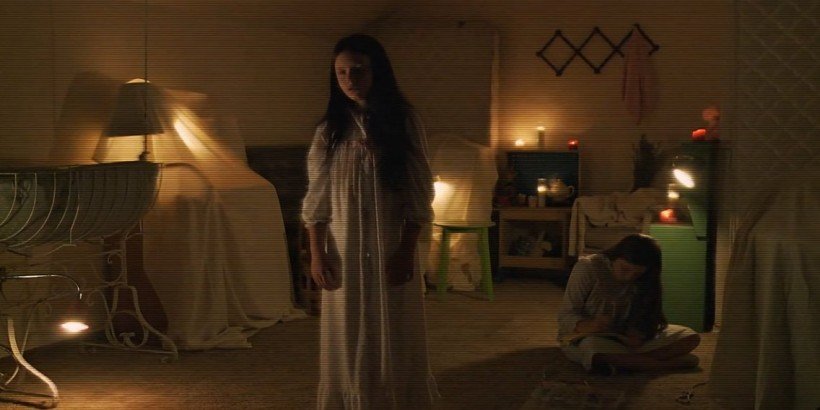 Another mark against the film is the cast. Aside from the comedic entrance of a spectacular, outdated porn-stache, the extended family that lives in the home is about as far from extraordinary as they come. They are so dull, painfully so. Chris J. Murray and Brit Shaw play Ryan and Emily, the parents of you Leila, portrayed by Ivy George – who does make for a creepy child when need be. Dan Gill enters the home as Mike, Ryan’s brother, while Olivia Taylor Dudley plays Skyler who is either a friend of the family or possibly Emily’s sister. It may have been explained, if so, I missed it. Dan Gill is actually pretty funny at times and gets the film’s best lines, “Next time, I’m just saying at Mom’s.” For the most part, the entire cast are guided through their steps like marionettes on strings.

The new draw for Paranormal Activity: The Ghost Dimension is adding 3D to the mix. It is used to represent the “spirit photography” that the discovered video camera can capture. Since it also is the only equipment that can actually see the apparitions tearing up the joint, it also serves as a compelling reason to keep filming, in order to see what the human eye – their eyes – cannot. For the audience, the effect treats the viewer to ghostly dust bunnies floating around in front of their faces. It an effective little trick that generates some “oohs” and “aahs” until it wears its welcome too thin. Problem is the film makers don’t seem to know what to do with their new toy once they have it. In another impressive scene, however, where the doorway appears (as seen in the poster and in the trailer), orbs float around giving everything a wondrous sense of space. Much like the haunted dust bunnies, the orbs are needed more throughout the film. Toby gets most of the 3D attention with the final 10-15 minutes, providing him ample opportunity to jolt the audience with glorious “coming-at-you” shocks. These are all fun but they are not used to improve the story, only to infuse the usual jump scares with a little extra “umph.” 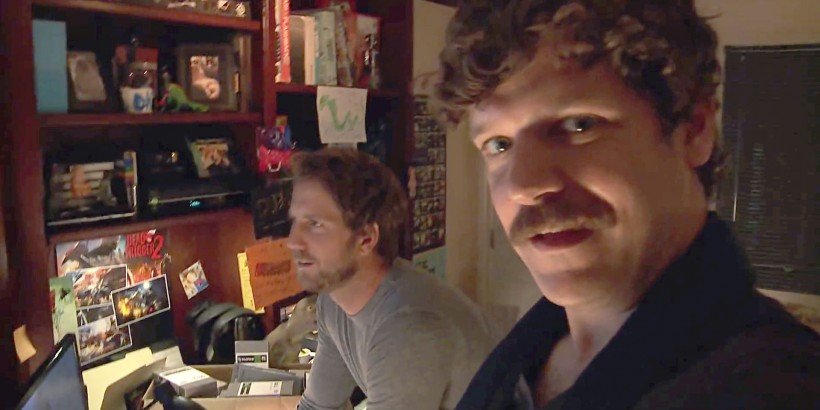 Director Gregory Plotkin, who has been involved with the franchise since chapter 2 producing and editing the films, lets the franchise beat him up and get the best of him. This makes for a lazy effort. A number of key scenes illustrate Plotkin is more than capable of directing this kind of feature and creating something scary and fun, but for the most part what makes it on screen is far too restrained and unambitious to escape its own contrivances. As a result, Paranormal Activity: The Ghost Dimension is an uninspired disappointment, fueling the fire for nay-sayers who claim found-footage is dead, overplayed and done. Where the first few Paranormal Activity films show the sub-genre’s potential and enthusiasm, this chapter clearly displays how far off the rails many found footage films have traveled. It may also do the same thing for adding 3D into horror films, while the concept is smart and intriguing, the execution is repetitive and tired – as is the film itself.

Nicolas Winding Refn makes polarizing films. Aside from his breakout mainstream hit  Drive, his films tend to be puzzling exercises in silent takes and enthralling visual set pieces.  The Neon Demon  is one such example, through more of a female skewed perspective. Refn’s protagonists tend to be stoic silent males, most famously Ryan Gosling with […]

This Is Not A Test – A ‘Clownado’ Has Been Spotted In Your Area – Seek Shelter!

Question: What would a cheesy B monster movie look like if it were made by a visionary filmmaker such as Ken Russell? Answer: It would look like The Lair of the White Worm (1988). Based on the Bram Stoker novel of the same name, it tells the tale of a modern English country village whose […]