First off, let me apologize to my readers for the late review of this week’s episode of The Walking Dead. Life gets in the way sometimes, but it’s all good. We left off from last week’s episode with a blaring horn garnering the walker’s attention thus throwing a wrench into Rick’s plan. The premiere was not the best or the most action packed. The question is was it just to set up for future episodes or are we going to see another Season 2 debacle? I stated last week that my tendency is to believe it is the former choice. Let’s see if I was correct, **Spoiler Alert**, I usually am LOL.

As the episode begins I am waiting for the payoff from the end of last week’s episode. Did we get it? Nope. WTF? Instead, we get Enid’s backstory as she loses her parents, wanders learning to survive and eventually makes her way to Alexandria. Throughout her travels she keeps forming the letters “JSS” wherever she goes: on the car window, on the ground, with the bones from the turtle she savagely eats and on her hand. Hmm, with it being the episode title it must have some significance. I have a feeling we will find out what it means before the episode ends. 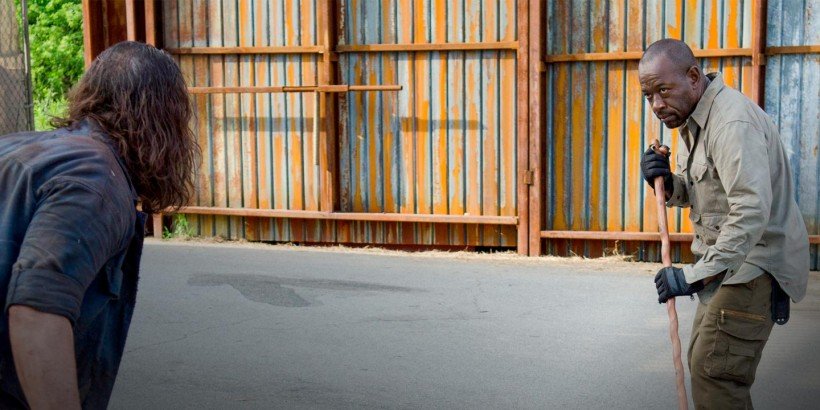 After the opening credits, we have to find out where the horn noise is coming from right? Wrong! Instead, we get a scene of Carol and the town ladies in the pantry talking casseroles. At this point, I am growing increasingly concerned at the show’s direction and my cell phone is at the ready to set my Fantasy Football lineups for the week. Just then Carol brings me back in. As she walks to her house she finds Jesse’s middle aged son Sam sitting on her steps pouting. She looks at him and says your dad used to hit you, now he’s dead — live with it or I will eat you up and go home. Now I’m reinvested. That’s the Carol I’ve grown to know and love. Her character development from season one to now is  an awesome arc to follow. She has gone from being an abused wife to one of the best badassses on the show. This became even more apparent as the episode continued.

We get a lot of uneventful scenes that develop the struggle between Jesse and Ron as she is now a single mother falling for Rick who killed her abusive husband. Jesse must now train Ron, her angst filled teen who sees Rick as the enemy (after all he did leave Ron fatherless) to be a survivor. Other filler scenes included Maggie and Deanna talking gardening, Eugene hoping for a sweet ass game room and an intro to the new town doctor, Denise Cloyd. Her development was essential to the storyline as psychiatrist who is a reluctant surgeon. Through the support of Eugene and Tara, she faces her fears and does what is needed. However she does not accept failure gracefully which really kept her humanized in this role. One funny thing was when she was checking Tara for a possible head injury she stated that she was sure it wouldn’t kill her and the always serious Eugene interjects with “unless it’s a hematoma and you miss it.” Another scene I thought was important was Gabriel approaching Carl to tell him he was wrong and that he wants to be trained. Carl keeping his back to him says that he needs to address that to the group himself and then states to come over at 3:00. 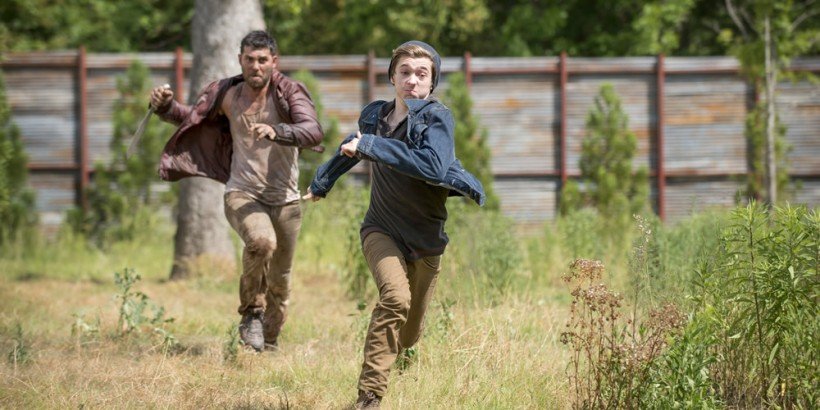 Still no horn but the episode does take a wicked hard left turn. Carol looks out the window and witnesses her neighbor, who is out for a smoke, get dismembered  by a big dude with a machete. Attack of the Wolves! Throughout the rest of the episode we see a series of brutal, merciless attacks on the town by the Wolves. No censoring was done here which was, in my opinion, spectacular. We see blunt force trauma, wielding axes, chopping machetes and slicing knives just doing damage all over. Our eyes were not spared as we saw these brainwashed bandits literally taking people apart. The townsfolk try to fight back to no avail. Then a robed figure shows up and begins dominating the Wolves. Who? I’m glad you asked. It is my girl Carol disguised as a Wolf. There is conflict here where Morgan wants to spare lives and tries to appeal to Carol’s senses as he witnesses what he sees as her de-humanization.

During the onslaught we finally we get to the source of the horn. The Wolves used a tractor trailer to ram one of the walls which sets off the vehicle’s horn. We witness Jesse’s character losing it as she brutally stabs a Wolf in her house. Ron looks on in horror to which I say “calm down, Ron, she’s a momma protecting her family and has a lot of pent up rage from all the abuse she’s received over the years.” Morgan reasons with some Wolves and lets them go. I get that Morgan is trying to remain human in a world of monsters, but dude, you just witnessed these guys savagely murder helpless Alexandrians! He did however have to kill a Wolf later in the episode, but apologizes before doing so. We also find out that “JSS” stands for Just Survive Somehow in a note left by Enid for Carl. The episode ending was awesome. We see Carol and Morgan wordlessly pass each other on the street which in my opinion represents Carol and Morgan’s opposite approaches. Carol is becoming more animalistic as Morgan is struggling to hold on to his hope in humanity. 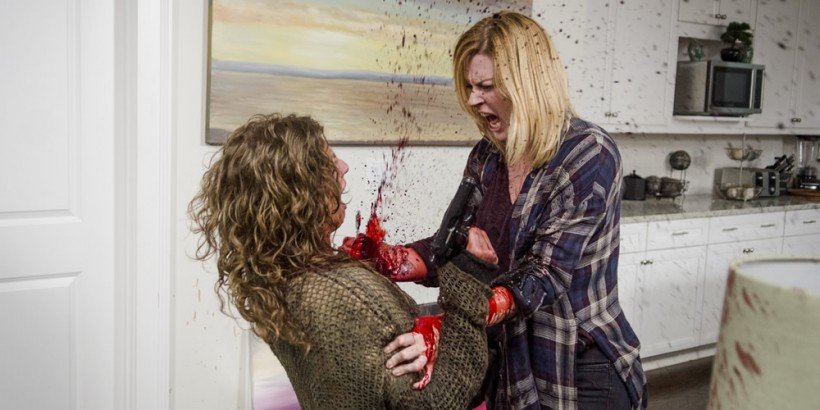 We didn’t get many walkers but no gore was spared. We did get blood, guts, body parts, physical and emotional conflict. Bravo Jennifer Lynch, the director of this episode. I am not familiar with much of her work but maybe I should be! The episode was written by Seth Hoffman who has done work on The Walking Dead before as well as other shows including House and Prison Break. I have to say I loved this episode and I love Carol. This was a major leap from last week. The only thing that kept it from five stars was some of the interactions at the start of the show.

This review contains spoilers. Alright, Grue-believers, what comes after Thanksgiving? Delicious sandwiches made from leftovers? Well, yes, but what I am referring to here is the knockdown, drag em out slug-fest known as Black Friday! In recent years however Black Friday has lost its luster (unless you are a Wal-Martaholic) as it has given way […]

Warning, this review contains spoilers. Well, hello my gore loving friends. How was this past week’s episode of The Walking Dead? I won’t keep you hanging: it was freaking awesome. I’m sure there is a ton of mixed emotions out there. Some are happy, some angry, some indifferent and some, well some people have watched […]

After a cliffhanger like last week,  Preacher  opens in media res as Jesse (Dominic Cooper) and Viktor (Paul Ben-Victor) are tussling in front of Tulip (Ruth Negga). Jesse is coming to terms with finding out the other two are married. Tulip keeps emphasizing that they are getting divorced, but Viktor can’t help but be direct. […]