Takashi Miike is an oddity, even  within  the Japanese  film industry. Responsible for films like  Audition  and  Ichi The Killer, Miike is known for taking ideas firmly rooted in Japanese culture and twisting them in  the most brazenly bizarre  fashion. Unfortunately, I’m more of  a novice to Miike’s work, but judging from those I have seen, there’s a certain recurring trend; this man’s style deals with the disturbed absurd. His latest film  Yakuza Apocalypse  is no exception, going as over the top as it possibly can with a premise that hits about every genre imaginable. Crime, thriller, western, horror, martial arts film, comedy. It’s all there for the taking. It’s almost like a live action anime in terms of its ability to blend these insane actions with such well crafted shots. The question is; does  Yakuza Apocalypse  manage to find some method to its madness?

Yakuza Apocalypse  – as far as I can tell  – follows a an extremely loyal yakuza underling named Kageyama (Hayato Ichihara), who respects boss Kamiura with an almost fatherly reverence. Kamiura is extremely beloved by many of those around him, mostly due to his skill in direct brutal force to the point that people believe him to be genuinely invincible. However, after refusing an offer to return to an international syndicate of mysterious assassins, Kaimura is  torn limb from limb by a martial arts expert Kyoken (Yayan Ruhian). Kageyama picks up his master’s head, which suddenly comes to life and reveals that he is a vampire just as he bites into Kageyama’s neck. Forced into being both the new leader of the yakuza and a bloodsucking creature, Kageyama must hone his skills and resist his desire for human flesh in order to fight against the assassin syndicate that is run by far more mystical and sinister forces than anyone would have anticipated. Bird goblins, English speaking Japanese cowboys and a lethal man in a frog suit  come into the picture and things get even weirder from here. 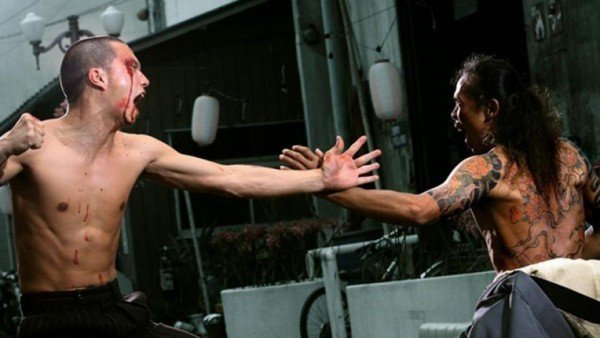 So, as one could probably tell from that plot description,  Yakuza Apocalypse  is a little nuts. Ok, maybe a bit more nuts than that. In fact, it’s bug nuts insane. A film like this removes any sort of attachment to logic, reason or cohesion. Takashi Miike instead decides to just throw sensible storytelling to the wind and fill the narrative with  looniness and genre mashups. This allows for things to go as crazy as possible, introducing cartoon logic and even some satiric takes on Japanese and other cultures that subvert expectations at every turn. For example, Yayan Ruhian (who people would most likely recognize as Mad Dog in  The Raid: Redemption  and Prakoso in  The Raid 2) has his usual sense of frantic crazy energy that helps keep the fights as vibrant as they ultimately are. At the same time, he’s dressed as an anime otaku (or an obsessive fan, for those unaware), complete with backpack full of posters and rolled up jeans while he’s violently tearing people apart, a visual contrast that adds to the comedy of the scenario. The same can be said for some of the villains of Yakuza Apocalypse, particularly a  Kappa Goblin (a monster of Japanese folklore) serving as a  crime lord who manages to be commanding despite his goofy bird/human hybrid look and the enigmatic being who kicks extreme ass despite being in an adorable frog costume.

Yet even within all of this insanity, there’s still a  through line that attempts to keep Yakuza Apocalypse  together: Kageyama’s identity crisis. Not only is he dealing thrusted with the responsibility of being head of the yakuza, but he must also directly confront the responsibilities of being a vampire. Both of them show their strain on  Kageyama’s  psyche, giving him a genuine arc.  It’s a bit more subdued within a film that gives far more emphasis to the wackiness of everything else, but even that insanity becomes a part of Kageyama’s journey. The concept of  “Stay Foolish” acts both as a funny pay off to a plot point and as an ethos for the character to fight by. It’s a small, but effective emotional point that matches Kageyama’s struggle to accomplish being a part of this group. It’s accepting both the responsibility and  himself that gives Kageyama  the strength to avenge his master’s death. Sure, this might culminate in him donning a cloak that makes him look like a legendary badass anime warrior of sorts to fight a supreme warrior in a frog suit, but it works for a film as over the top  as  Yakuza Apocalypse. Embracing one’s foolishness serves as an oddly inspiring metaphor for one to face the challenges that come against them, adding a note of sincerity to these bizarre proceedings that the film needs to keep from tearing apart at its wacky seams. 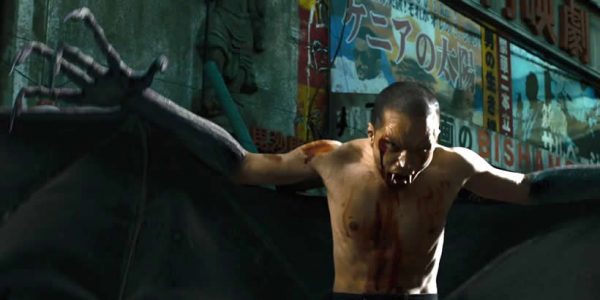 That being said, the tether doesn’t totally keep  Yakuza Apocalypse  from occasionally going off on tangents. One notable example is a subplot involving the female yakuza captain and her attempt to keep the vampiric lifestyle of the oncoming reigns satiated. It results in some fun imagery, but ultimately feels rather aimless in the grand scheme of things. The same can be said of a subplot involving those who are initially turned into vampires by Kageyama, which builds up more and more throughout the film until a potential climactic battle that seems to be broken up by sheer happenstance. Storylines like these aren’t necessarily essential to the overall plot, but it is proof that the general insanity of this genre mashup does have its limits. Still, these subplots do provide occasionally fun moments, including one where a formerly wimpy son of a yakuza member turned vampire attacks a car with an axe that shows off the crazy physics of this world and Takashi Miike’s keen ability to rotate his camera around his subject. The technical features of Yakuza Apocalypse  are varied in an appropriate fashion, going from elaborate CG to extensive miniatures to Hammer Film style lush gore. The techniques are interchangeable  depending on the style Miike seeks to emulate, to jarring but effectively entertaining results.

Yakuza Apocalypse  is obviously all over the place. One could easily call it unfocused and insane to the point of making its audience numb to the craziness, which I honestly could see for many that attempt to digest something this crazy elaborate. Yet, that’s part of the point. Takashi Miike’s latest may not be as consistent in its narrative or emotional connectivity as the more grounded and disturbing classics of his filmography like  Audition, but this isn’t a film that requires such coherence. It showcases Miike’s love of not just madness, but cinema in general by mashing up nearly every single genre into one package. With it’s one major emotional through line and roughly developed plot, there’s just enough context to grasp onto for the mass hysteria builds up endlessly. It’s a constant lateral evolution of insanity that keeps one engaged even when the story isn’t quite doing so. As long as people  follow that central message of “staying foolish”, one can keep track of the madness in their own way. And if not… at least stick around for that frog guy. Well worth the wait. 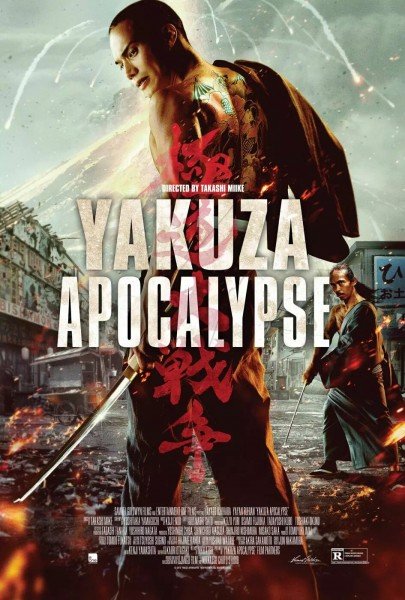 There seems to be something mysterious about cryptids, creatures like Bigfoot and the Yeti, that simultaneously makes them tantalizing subjects for low budget (and occasionally big budget) filmmakers of all […]

Communication is key to our human understanding. It’s what serves as the backbone for how we find unity in trying times. Times where we’re unsure of how to process something […]