In the time since cinematic slashers  like Michael Myers, Jason Voorhees and Freddy Krueger had their heyday in the  1980s, we’ve seen plenty of comedic takes on the genre. There’s the satirically dark spins  like  Behind the Mask: The Rise  of Leslie Vernon, the more silly raunchiness with  Club Dread  or the less ambitious referential stab of  Scary Movie. Yet, even when the laughs and trope dissection comes at a continuous pace, nine times out of ten these comedies miss something key; character investment. Aside from perhaps the  Scream  franchise, these comedic takes rarely have a desire to make these people worth caring about. The philosophy  seems to be  “why develop a character when you can just have more jokes?” This is something  The Final Girls  subverts substantially throughout its running time, emphasizing on character in a way that makes it stand alone within the horror subgenre.

The heart of The Final Girls  comes from our main character Max (Taissa Farmiga). At the start of our story, Max is mourning  her mother Amanda (Malin Akerman), a former scream queen of sorts who starred in a  Friday the 13th  knock off franchise Camp Bloodbath  and died  in a major car accident that  Max survived. A few years later, Max is approached by her  nerdy friend Duncan (Thomas Middleditch) as he begs her to be the guest of honor at a horror film retrospective he’s hosting that will screen the first two films in the Camp Bloodbath  franchise. After begrudgingly agreeing and a series of magical circumstances, a few of the audience members–including Max, her friend  Gertie (Alia Shawkat), her former best friend Vicki (Nina Dobrev), Max’s crush Chris (Alexander Ludwig) and Duncan– are sucked into the film. There, they encounter the various camp counselor characters that have their minds stuck on sex, drugs and partying, including Amanda’s character Nancy. While desperately trying to find some way of bringing her mother back to the real world, Max and the rest of the group must attempt to survive the film without being slashed by the killer.

With The Final Girls,  director Todd Strauss-Schulson (who brought such kinetic comedic energy to a one note comedy  franchise with  Harold and Kumar 3D Christmas) contrasts the real world and cinematic 80s landscape perfectly visually, casting the real world in muted  drab colors that pale in comparison to the brightly lit almost pastel like hues of the Camp Bloodbath  world. It’s almost as if our real world characters are in a HD  restoration of this older slasher film that feels as vibrant and tactile as it could. This allows for the slasher tropes to breath in an environment that  seems  right out  of the genre, but in a brighter sense that plays to the fantasy of the conceit with an almost Wizard of Oz  style disparity from reality. Schulson’s knack for creative camera work lends to the comedic pacing,  particularly when the characters attempt to kill the slasher villain and interact with the transitions.  All of this serves to confirm the clear line of demarkation that not only adds to distinguishing the two worlds for audiences, but also plays into the fantasy  Max is trying to keep alive: her mother.

That’s where the heart truly comes in. Right from the beginning traumatic car accident, we see the mother/daughter connection of Amanda and Max, being the only sort of family either have. This only makes the inciting incident of the car crash hurt all the more and starts the major theme of coming to grips with letting go of the past all the more heartfelt. As Max takes a more motherly role towards the Nancy character, it becomes  both  a comedic role reversal and  an emotional anchor for all the film’s events that are perfectly sold by extremely genuine performances from Taissa Farmiga and Malin Akerman.  The Final Girls  feels like the most creative and best case scenario for an updated version of  Back to the Future, with all the cultural clashes between the filmed fantasy portrayal of the 1980s hilariously conflicting  with  these modern teens. At the same time,  the film allows these characters  (both real world and otherwise) to have actual  moments of  fear about their potential deaths that gives a  solid emotional groundwork for the jokes to play off of.  Through this silly cinematic fantasy landscape,  The Final Girls  manages to serve as a comment  on nostalgia and how joyful  yet ultimately fleeting its fun can be  as one faces the reality that comes slashing at their door. 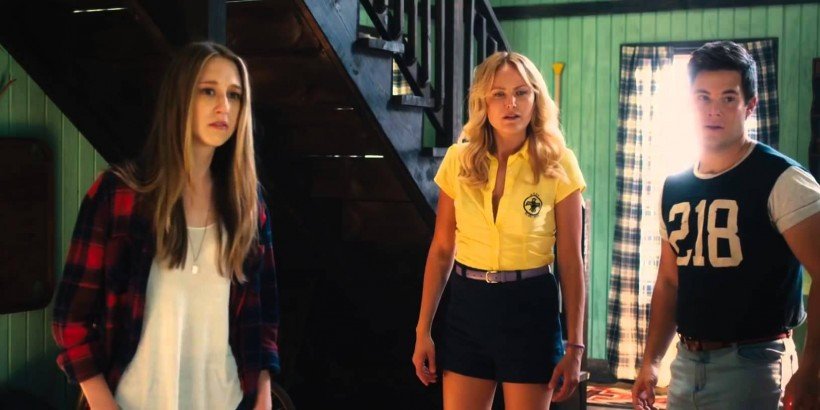 Of course,  The Finals Girls  still consistently works at what it mainly should be: a horror comedy. The tropes of the slasher film are all there, mainly in terms of the archetypes of the characters within  Camp Bloodbath. The two major highlights in this department are the machismo jock character Kurt (played with unapologetic meathead vibes by  Workaholics‘ Adam DeVine) and the slutty airhead  Tina (played with hilariously overly energetic goofiness by Angela Trimbur). Their attitudes perfectly represent the type of gender roles and sexual politics that were cultural reinforced in their time, which contrast hysterically with the sensibilities of these modern teens. The lighter tone does occasionally  hinder the film’s overall effect on a horror level, mostly in that the gore and sex that one would find in the type of slashers  The Final Girls  is making fun of is mostly absent here. This will likely disappoint the bigger gore hounds who prefer  a bit more of the horror in their horror comedies, but at the same time give The Final Girls  a wider audience amongst younger audiences who may be drawn to the impressive cast of young talents from shows like  The Vampire Diaries  and  American Horror Story.

The Final Girls, despite being more comedy than horror,  is a film soaked in appreciation for the slasher film subgenre. With its shiny aesthetics, fourth wall breaking logic and cultural clashes, the film showcases a knowledge and love for the trappings of films like  Halloween  or  Friday the 13th  in a way that will likely amuse horror fans that may be slightly disappointed by the lack of true gore. Yet, the heartfelt story revolving around Max dealing with her mother’s death and the possibility of having her back in her life makes this far more than a mere slasher parody.  The Final Girls  is one of the few horror tinged films this year one could call genuinely sweet and it’s honestly refreshing to see in a year with more mean spirited  one note  horror comedies like  Cooties. Films like this are proof that sincerity doesn’t hinder comedy or horror; it can strengthen both. 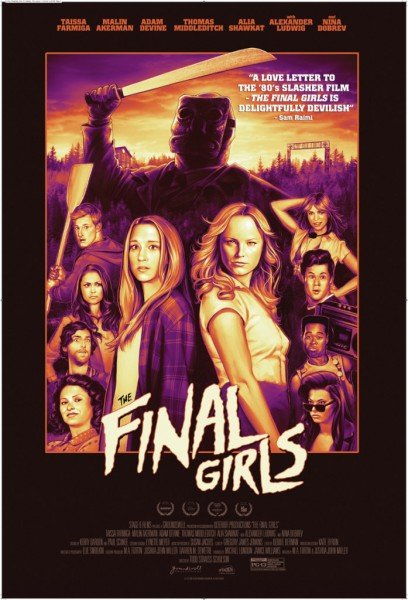 [Review] The Child Remains (Blood in the Snow, 2017): Chilling Tale of a House Haunted by Infanticide Delivers Eerie Atmosphere and Fine Performances

Canadian independent horror offering The Child Remains borrows from the heartbreaking, true story of the “Butterbox Babies” – a series of murders and illegal adoptions at a Novia Scotia maternity […]

Nicolas Winding Refn makes polarizing films. Aside from his breakout mainstream hit  Drive, his films tend to be puzzling exercises in silent takes and enthralling visual set pieces.  The Neon […]

“A Different Set of Cards” (GenreBlast 2016): An Engaging Crime Thriller Whose Unusual Structure Compliments Its Theme

Our future depends upon not only the cards that Fate deals us, but also upon how we play the hand that we are dealt. If the same people were swap […]