In Deathgasm, a  new horror comedy from New Zealand, a recent high school transfer, a dropout, and two geeks form a metal band that they  decide to name DEATHGASM (lower case is for pussies) after rejecting Murder Boners, Toothed Vagina, Maggot Sperm, Cannibal Unicorn, and SSSSSSSSSSSSS. In short order, they stumble upon the ancient “Black Hymn” and learn that it can be used to summon the King of Demons. They play said hymn and cause everyone that hears it to become demon possessed. Buckets –  no, barrels – of blood, guts, and gore; much hilarity; and apocalyptic destruction ensue … and ensue … and ensue … and … well, you get the picture.

Does this sound like an idea for a film you might like? To be honest, the concept wasn’t that appealing to me, especially when I learned of the heavy metal connection. Unlike a lot of horror fans, I am not a metalhead. But the good news is, you don’t have to be a metal fan to enjoy the wild ride on which Deathgasm takes you. I’m guessing I missed a few inside jokes that I would’ve understood had I been a fan, but I had a blast watching this movie anyway! 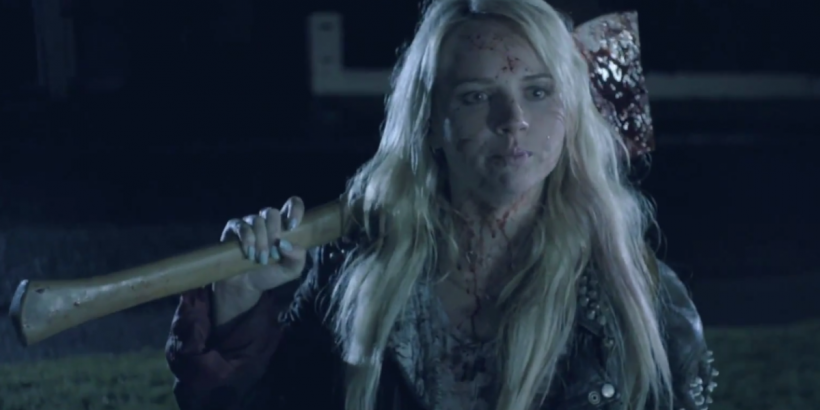 The film’s guiding principle seems to be, “Excess is never enough!” I’m sure you’ve seen people drenched in vomited blood before, but in Deathgasm, once is never enough. Yes, we see the same person drenched in vomited blood, twice in succession! Disemboweling and dismembering demons with a chainsaw may seem excessive to some. But just when you thought the chainsaw eviscerations were over, we get to see what can be accomplished with two chainsaws at once. Nothing is taboo in this movie. No body member is safe from dismemberment and no available “tool” is left unweaponized. And trust me, you really have no idea how far the movie goes in living up to the previous statement.

The filmmakers tip their over-the-top-and-off-the-cliff hand very early. When a suit-clad, evil operative  fails to acquire the “Black Hymn” as assigned, his dark-side supervisor Aeon (Andrew Laing) orders him beheaded. Two henchman in robes and masks promptly perform the decapitation with a ceremonial sword. To their dismay, they do it over a custom-made rug and blood is splattered all over the one-of-a-kind piece. Aeon  is livid and orders them to do it again and to use a tarp this time. The reaction of the two henchman and their attempts to replace the head and re-behead the operative are ridiculous, yet hilarious. So yeah, over the top and off the cliff. 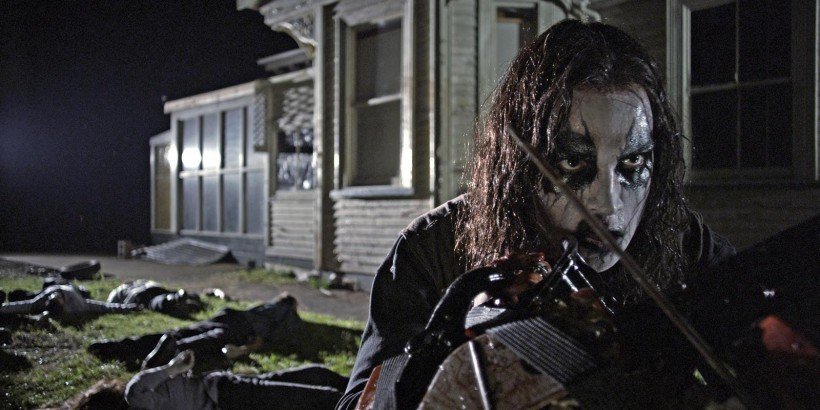 In the midst of all this mayhem, there’s also romance. It’s the usual romantic arc: boy meets girl, boy’s metal bandmate sabotages the relationship, boy learns the truth about bandmate, boy fights bandmate, boy and girl finally find love, and boy makes up with bandmate to save the world from demonic destruction. So Deathgasm is kind of a met-dem-rom-com. Okay, that might be a stretch, but how else are new subgenres born?

Brodie, the boy in the boy-meets-girl slice of the story, is played by Milo Cawthorne. I loved him in Blood Punch (2013) and he doesn’t disappoint here. The girl half of the equation, Medina, is played by Kimberley Crossman. She does an excellent job of portraying the most popular girl in school while exuding naivety through shy glances, nervous side comments, and sincere but inept efforts to fit in with her new found metalhead brothers-in-arms. Brodie’s dropout bandmate and fellow demon slaughterer, Zakk, is played by James Blake, who interestingly served as an uncredited body double for Thorin Oakenshield in The Hobbit: An Unexpected Journey (2012). In Deathgasm, Blake is convincing in his role as the kind of character who, in a wasted attempt at rebellion, unwittingly burns the words “Hail Satin” in a grassy lot. Sam Berkley and Daniel Cresswell are effective as bandmates Dion and Giles, rounding out the comedic ensemble. 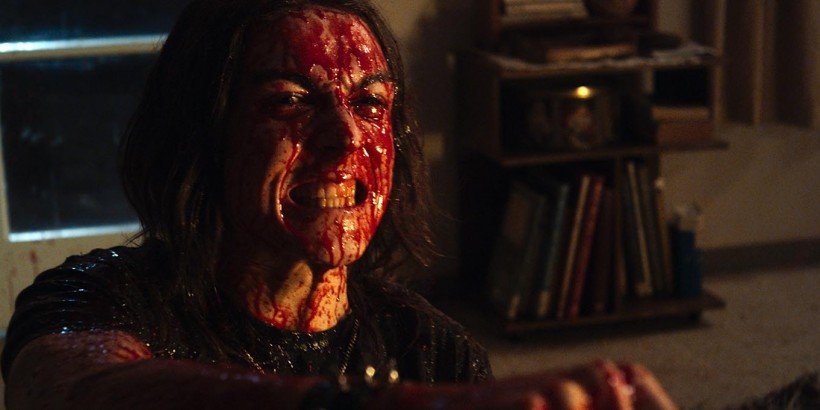 Deathgasm is a production of Ant Timpson and Timpson Films. Timpson or his production company also played a part in bringing us The ABCs of Death (2012), The ABCs of Death 2 (2014), Housebound (2014), and Turbo Kid (2015). The film is written and directed by Jason Lei Howden and is his first feature-length effort. Howden’s background is in visual effects and it shows. Previous effects work includes the Hobbit  trilogy, The Wolverine (2013), Abraham Lincoln: Vampire Hunter (2012), Prometheus (2012), and The Avengers (2012). It’s also easy to see the influence of previous cult classics like Peter Jackson’s Dead Alive (aka Braindead, 1992) in this film.

It’s true that there’s nothing particularly unique about Deathgasm’s story, a bouquet of horror and metal stereotypes in an unrestrained arrangement. The joy of the film is in the recognition of the stereotypes and going along for the gory, comedic journey to see where Howden’s next excess will take you. The ending leaves the door open a crack for a sequel and when asked about that possibility, Howden has responded by saying, “I always bring it back to the fact that we’ve got to keep it Kiwi, keep it funny, and keep it gory.” I have to hand it to him for staying true to that vision throughout this film.  It’s a wild, fun and funny, bloody ride. 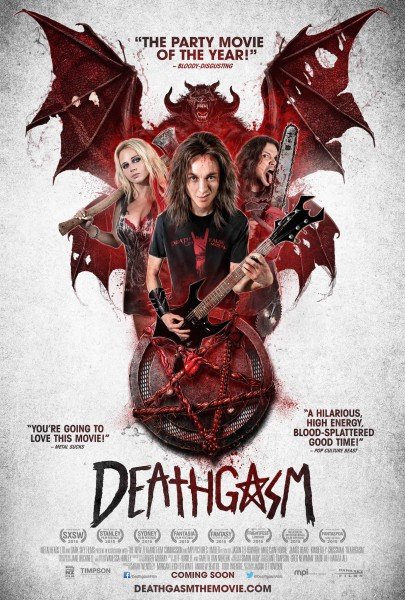 Rich in atmosphere and a treasure to watch, the short horror film Belladonna is a marvelous effort. From its terrific performances to its mesmerizing cinematography, this latest effort from director/cinematographer/editor Brett Mullen (Bombshell Bloodbath [2014], Fantasma [2017])  is an absolute gem. Opportunistic, smarmy Sam Franco (Sterling Hurst) sees a beautiful blind woman at a social […]

“Love, Work and Other Demons” (2016): Female Fighter Waits Tables and Wards Off Devils

What’s a young girl to do when she has a mother that isn’t big on communication and interaction, a teen sister who worships H.P. Lovecraft’s fictional Old Gods, her father has recently passed away — and she begins seeing a strange, frightening creature outside her window? Writer/director O.B. De Alessi explores these questions and others […]