Taking place right where Contracted left off, Contracted: Phase 2 is the latest example of a needless sequel that pretty much craps all over the original film. As C2 (I’m calling it “C2” from here on) opens, the situation Samantha (Najarra Townsend) found herself in is quickly resolved with a few well placed bullets, but not before she takes a bite out of her mother (Caroline Williams). Now the man who had fevered sex with her in the first film, Riley (Matt Mercer), is carrying the disease, and looking for the man who infected Samantha for revenge before it does to him what it did to her.

Exactly why Riley is looking for revenge, and not a cure is something the script (by Craig Walendziak) conveniently ignores. Speaking of ignoring things, Riley doesn’t seem to mind the disease slowly rotting him away as he looks for the source of the disease. He pretty much contaminates everyone and everything he runs into. In one amazingly stupid scene, Riley is sitting in a examination room with a disgusting piece of his fingernail embedded in a really gnarly wound on his back. But rather than tell the doctor about this, he says nothing. But it really doesn’t matter because the doctor doesn’t even attempt to thoroughly check Riley out, making him one of the worst doctors to ever grace the big screen.

Riley’s methodical ignorance of his symptoms as he chases down the source of the disease is one of the reasons why this movie is so stupid. The fact that the people around him don’t seem to notice that he’s really messed up is another one. People literally talk to him while his mouth is caked over with the black vomit that he spews out every few hours. His skin is mottled, discolored & putrid, yet no one has a problem talking to him face to face. The most egregious example of this takes place during a tribute party for Samantha – a wake of sorts. It’s being hosted by Riley’s pregnant sister (Laurel Vail) and her husband (Peter Cilella), and we’re led to assume that his sister provided all the food for the gathering. So here’s Riley, sick and looking like a something from out of a George Romero movie, standing next to his brother in law. Riley’s nose starts to bleed, and a nice dollop of his blood lands right in a bowl of hummus that’s on the table in front of him. Mind you, this all happens directly in front of his brother in law, who says nothing at all. Then, after a small speech, Riley’s pregnant sister ambles up to the hummus (which has a really nasty glob of blood directly on top of it), dips a cracker in it (completely ignoring the fact that it’s covered in blood, despite the fact that she set it out on the table in the first place), and eats it! She eats it directly in front of her husband who doesn’t say a word to her about how her brother just bled nose blood directly on the stuff she’s eating. Of course, this is done to have a scene in which she gets sick, along with her unborn child. But it’s the worst example of trying to set up a scare I’ve ever seen. Walendziak’s script makes everyone in the film as stupid as humanly possible. Scenes like this are meant to pander to the lowest common denominator, and they assume that the audience watching is just gonna go along with it. I may not be the sharpest knife in the drawer, but I’m not so stupid as to accept ridiculous scenes like this one. 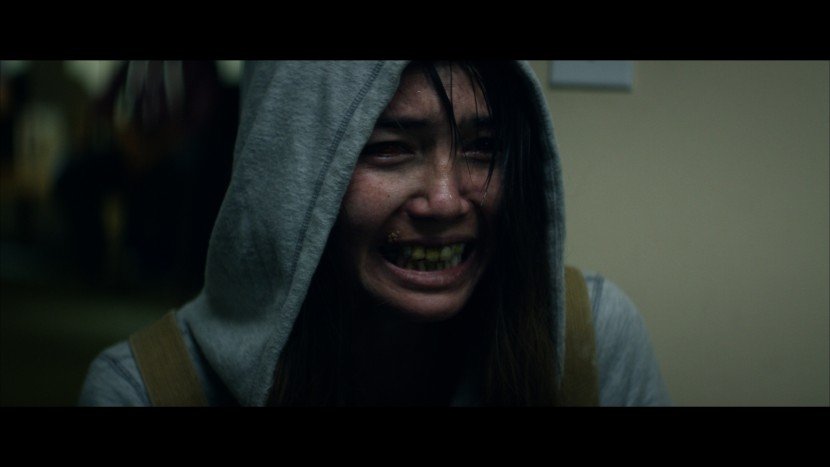 Additionally, Riley has essentially declared jihad on the man who’s carrying the infection. That man was never really seen in the first film, but he’s front and center here, and is named BJ (Morgan Peter Brown). In an odd turn, he’s not just a sociopath infecting everyone he comes into contact with. He’s also some sort of nutjob who recites apocalyptic sonnets to himself in a dark lair he calls home. He’s adorned with tattooed fingers, and apparently he speaks in a code to a conspirator buddy he has that tries to treat Riley at one point. None of this makes any logical sense, and it completely ruins the vibe that the first Contracted film worked very hard to establish. As a matter of fact, I liked Contracted enough to put it on my “Best Of” list last year. But this sequel is so wrongheaded and misguided, it’s a guarantee to make my “Worst Of” list this year. 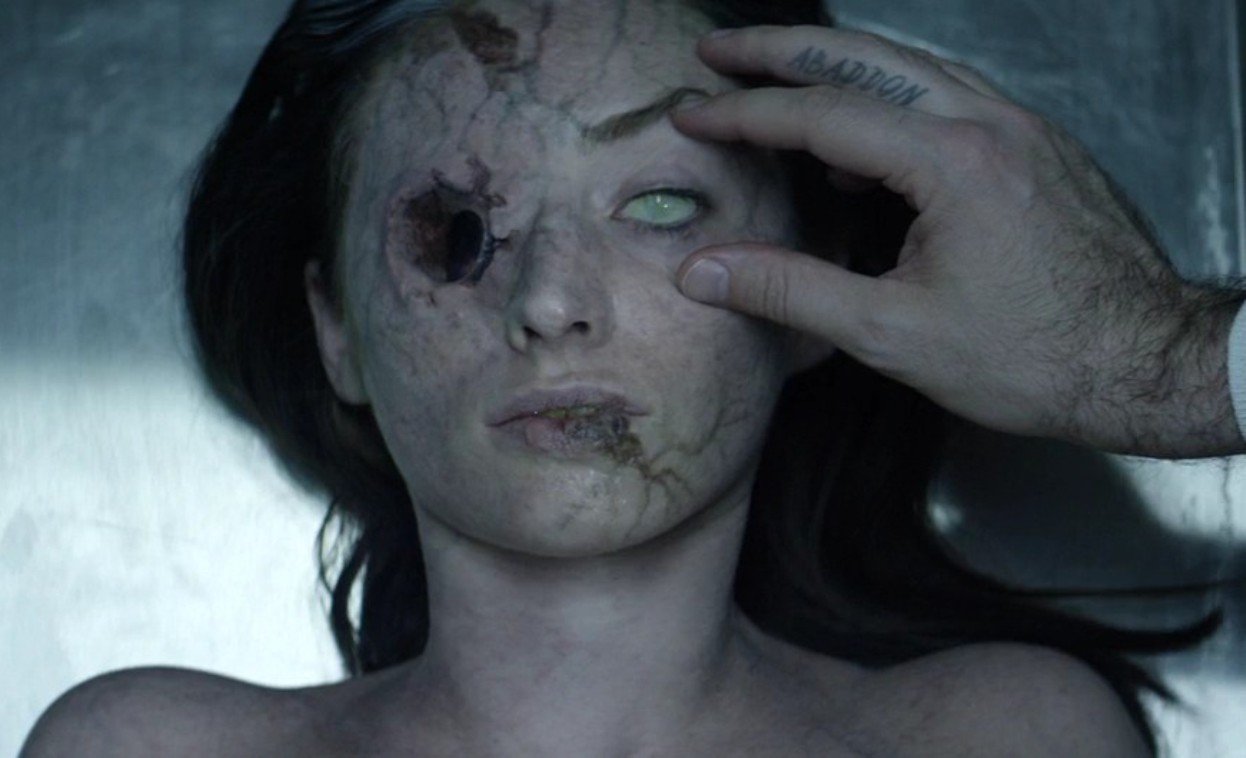 At the very least, the film looks good, and the makeup effects (by Mayera Abeita) are so disgusting, they might put some of you in varying states of internal distress. The open sores on display here are some of the most revolting sores put to film, and when the characters start to dig their fingers into these sores it’s downright horrifying. Director Josh Forbes actually does a good job of moving the story along, if nothing else, C2 moves quickly. But the story and the characters are so dumb that I was actually insulted by it. Making matters worse, it ends in a cliffhanger that promises a third phase, but I have no idea how/where they can take this story to make it something worth watching. As it stands Contracted: Phase 2 pretty much jumps the proverbial shark, and it assumes that the people watching it are stupid enough to want to care about a third film. If you’re looking for a film with some disgusting gore, and maybe the dumbest characters you’ll ever seen in a film, then this is something you’re gonna want to see. For everyone else who has at least half a brain – just say no. 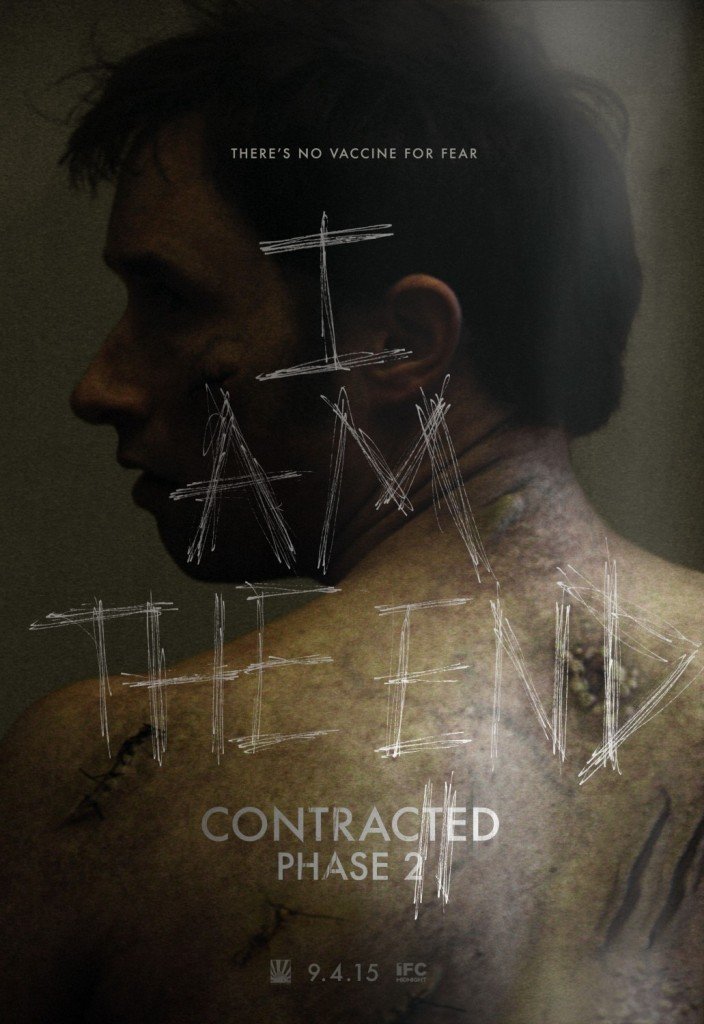 [Review] Get Gone (AHITHFF): A Fresh Spin On the Urban Legend Horror Subgenre

A group of internet hoax busters goes on a team-building retreat to Whiskey Flats, Oregon, and winds up finding out the hard way that not all urban legends — or in this case, a very rural one — are ruses in the new horror outing Get Gone. Writer/director Michael Thomas Daniel’s first narrative feature is […]

You better be paying close attention during the 90-minute run-time of Nightmare Code. A missed word or visual, here or there, and you might miss a small byte of information that’s key to the story. A lot happens and sometimes it feels like an information dump. The quartered, split screen often used adds to what […]

Director Chris Parrish – along with co-writer Mason Parrish – delivers a lighthearted, fun monster-filled romp as a group of kids encounters all kinds of terrors as they explore an amusement park in search of Al Capone’s legendary hidden treasure in Thrill Ride (2017). The film has a Goonies and Monster Squad vibe in the […]

GODZILLA VS KONG (2021, HBOMAX) Review – An Epic Battle of the Titans

On episode 438 of Horror News Radio: The Grue-Crew review… GODZILLA VS KONG (2021, HBOMAX). Warning: possible spoilers after the initial impressions! Be sure to subscribe to the Gruesome Magazine YouTube channel to catch all the HNR episodes. And check out Patreon to see how to watch the recordings live! This is HORROR NEWS RADIO, […]

THE FALCON AND THE WINTER SOLDIER (2021, Disney+) Eps 2 “The Star-Spangled Man” Reaction & Review

Welcome to HEROES & DROIDS, your guide to pop culture movies and TV! This week we review… THE FALCON AND THE WINTER SOLDIER (2021, Disney+)Episode 2 – “The Star-Spangled Man” On HEROES & DROIDS, we discuss pop culture about Superheroes, Sci-Fi, Disney, and Action. From Marvel to DC, from Star Wars to Star Trek, From […]

HORROR NEWS OF THE WEEK RETURNS – The Night House, The Suicide Squad, and Wellington Paranormal

“No! The Beast has no brother! Don’t call me your brother!” What a mean thing to say to your brother! … er, cousin. … er, the antichrist? On second thought, maybe it’s not that mean. Join your faithful Grue Crew – Doc Rotten, Chad Hunt, Bill Mulligan, and Jeff Mohr – as they catch up […]

I am your host Doc Rotten and this is the GRUESOME GUIDE to Horror Movies for Month 2021. Back with me again are the scariest, goriest, bloodiest co-hosts on the ‘Net. Joining Doc is Vanessa, Podcasting Rock Star & International Cosplay Queen. TRAIN TO BUSAN PRESENTS: PENINSULA – 04/01/2021 Synopsis: A zombie virus has in […]

“My face frightens me. My mask frightens me even more.” Sometimes, someone else’s face frightens us the most. Join this episode’s Grue-Crew – Whitney Collazo, Chad Hunt, Daphne Monary-Ernsdorff, Jeff Mohr, and guest host Bill Mulligan – as they go transatlantic for Georges Franju’s stunning Eyes Without a Face (1960). Decades of Horror: The Classic […]