Robert really loves Fern. I mean he  really  loves her  –  so much, in fact, that he stalks her from the grave, baby! This is actually a bit of Fern’s fault but we will get to that in a minute. But girls out there, if you ever thought you had a stalker, you need to watch Clinger, because Robert takes stalking to a whole new level!

Clinger is a mishmash of movie genres. You get a bit  of each of romance, comedy, and horror. When the movie  first started, I thought for sure that it  was going to be some sort of offbeat dark comedy with  no horror at all. Clinger basically begins as a romantic comedy. Fern (Jennifer Laporte) is a track star and she falls and dislocates her shoulder. In steps Robert (Vincent Martella) to put  it back into place and with a quick pop of a shoulder joint, it is love at first sight. At first they both love each other very much, for about a month. Robert is all about the Fern, so to speak, but after a month Fern is starting to get tired of his one-lyric songs that  consist of “Fern,” his every-week-anniversary surprises and, well, she just gets tired of Robert. So when Robert has her come over one night to his house for dinner, she decides to break up with him. Unfortunately for Robert, this happens when he is revealing a declaration of his love by use of  . . .  well, let’s just say he is using some sort of contraption that looks  more like a machine of execution than anything else. As Fern delivers this crushing blow to Robert, he falls back into the machine, and his head goes a-flying and the blood goes a-spraying. 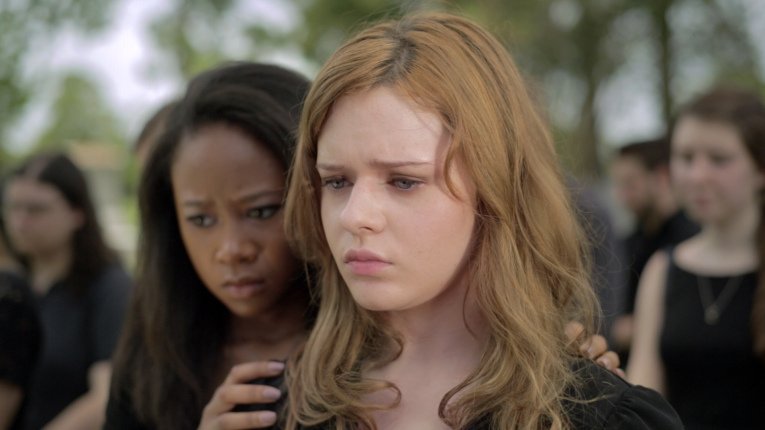 After Robert’s  “tragic” death, Fern of course gets  comfort from both her sister Kelsey (Julia Aks), who is always looking to make millions as  an entrepreneur and oddly enough steals things from Robert’s funeral, and Moe (Shonna Major), her Christian friend who is always inadvertently dropping sexual innuendos. After the funeral, Fern begins to notice some strange things going on, like Robert’s love songs playing from her CD player even when she turns it off .  You guessed it: Robert is  haunting Fern,  so she does a Google search and looks up a ghost hunter, who oddly enough turns out to be her mercurial and high-strung track coach Valeria (Alicia Monet Caldwell). Valeria gives Fern some advice as to what is going on, telling her that she is being haunted by a love ghost or a butt-loving larva ghost(?). She then tells Fern  how to summon up Robert if she wants to, which is actually some odd variation of the Bloody Mary chant. Fern, feeling guilty about what happened to Robert and kind of missing him, does the ritual and brings Robert back, stitched-on head and all.

I feel the movie bogs down a bit in the second act because we see Fern actually try to date Robert again  while he is a ghost, then break up with him again  by basically giving him the “It’s not you, it’s me” line. At least there are  ghosts, which finally  transitions the film into the horror aspect. Before we get to that, though, it is during this ghost dating act that we get to see some new character introduced and just how much of an obsessive guy Robert can be. 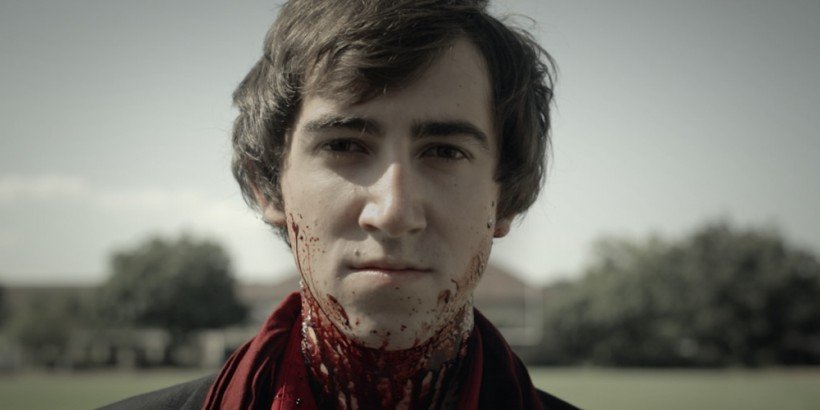 Once Robert finds out he is dead, he decides to go visit the graveyard and discovers other ghosts who have tragically died. The only ghost that is of any consequence though is Temperance Baker (Leah Henley), who has an axe buried in her skull. She talks to Robert and gives him some love advice. The other ghosts are somewhat interesting but never do much until the end of the movie,  except for the smoking speakeasy girl who often pukes  up black lung vomit.

Just like in Fern’s  real-life relationship with Robert, her afterlife relationship turns sour as well because  he will not leave her alone. To make matters worse, he starts using his supernatural powers to overdo actions to show his affection, like teleporting picnic items into Fern’s lab experiments and ruining her test results or almost drowning her in her car with gifts he keeps teleporting into the vehicle while also locking the doors so she can’t escape. 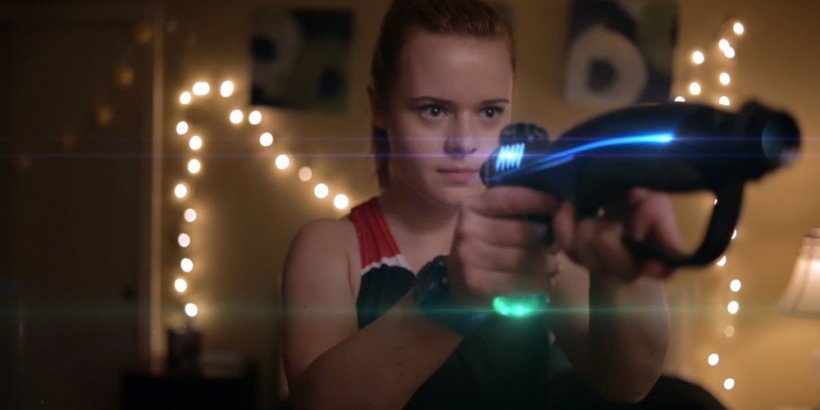 Fern tries to tough it out a bit, and even tries to have ghost sex which results in something way worse than what a virgin should experience for their first time. Eventually though, Fern has to break it off, leading to the horror part of the movie I mentioned earlier.

Once Fern calls off the relationship, Robert starts getting jealous and using his spirit powers to harass Harlan (Taylor Clift), a guy who he thinks Fern likes now, by sending floating scissors after him in the shower, trying to circumcise him  and  using his powers to taint the booze at a party that Fern goes to, turning it into blood instead. When Robert has finally  had enough, he  decides to kill Fern to bring her to the afterlife with him, which is an act encouraged by fellow ghost Temperance Baker. Robert mutates his teddy bear gifts into killer teddy bears, assembles his ghost friends into a small army, and goes after Fern. 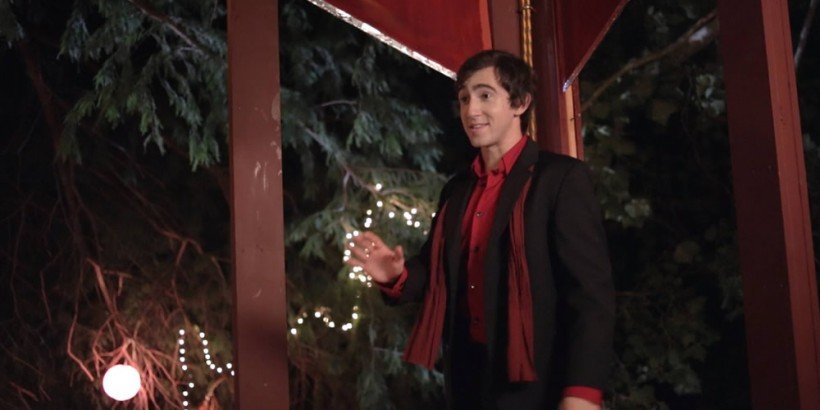 Fern recruits her friends, parents, and new love interest Harlan to help stand against the undead onslaught and, thanks to some pills Valeria had given Fern, everyone can now see all the ghosts and engage in a climatic battle with them at the high school track meet.

Writer/Director Michael Steves has put together a pretty interesting story with Clinger. What started out as what I thought was going to be a just a dark comedy turned into a pretty amusing dark horror comedy. The film has some subtle humor in it that I really appreciated, like when Fern tried to do a Google search and before she typed in the entire thing she was looking for, it showed her those odd suggestions that Google will give you. Fern’s parents add  soft, little  touches of humor and  Kelsey’s sleazy boyfriend Dean (Paulie Deo Jr.) offers up some funny stuff, as well. These subtle, little pieces of humor along with these and other characters help give the movie its charm. Unfortunately, I felt the characters other than Fern and Robert weren’t as fleshed out as much as they could be. Characters like Harlan and the one girl that we all know from school who is always doing activities and is “everyone’s friend” kinds of get left to the side a bit in terms of character development. Even Kelsey and Moe could have used a bit more rounding out as I feel it would have made the film a bit stronger overall. I think this is because of  the fact that so much time was spent on Fern and Robert dating again  after he had died, which I admit did set up some other parts of the film, but something about how it was done seemed to really go on too long. 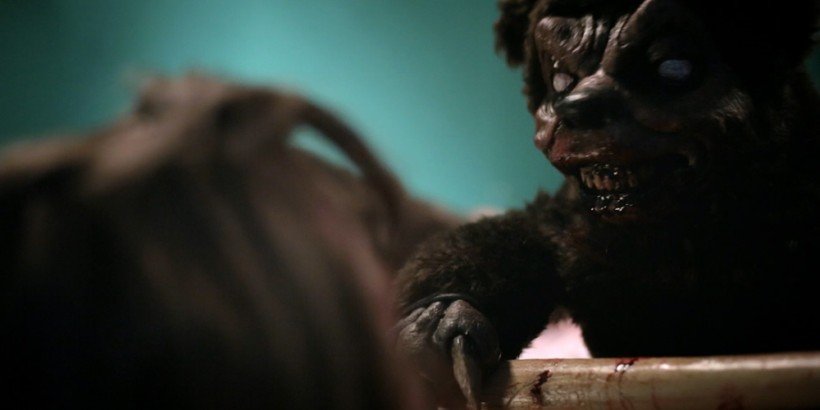 The film is only 81  minutes long but I did feel that it slowed down a bit during the second dating act and took too long to get to the horror part of things. As a result, I started to feel a little bored. That being said, I still enjoyed Clinger.  I felt that the actors were all very solid and engaging, the story is quirky, and the humor is entertaining. The film  reminds me a bit of the movies Better Off Dead and Clueless, except with ghosts.

If you are in the mood for something that is offbeat and a  bit dark in its humor, then Clinger is a good film to pass the afternoon with. It’s funny, charming, and has just enough of an X-Factor to keep you interested and to want to tell your friends about it. 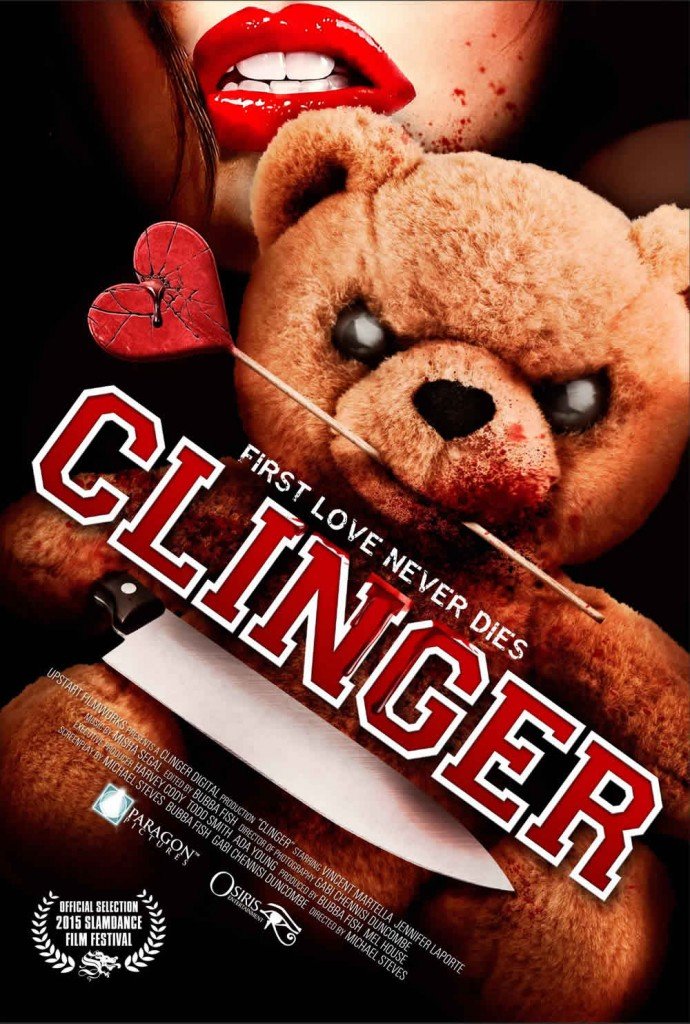 Paul Cardullo returns with another Groovy Gory Gruesome Gold entry that should not be missed. Doc Rotten and Paul Cardullo ventured to the RetroFantasma event recently at the Carolina Theatre […]

A successful young couple, tired of living in their gorgeous San Francisco apartment, decide to look for an estate in Napa Valley where they can relax, start a family and […]

The schlocky 90s era  adaptation of  The Fantastic Four  is the stuff of geek legend. Infamously made as a quick attempt by German production company Constantin Film  to keep the […]