I am a fan of do-it-yourself  film projects. Even the greats must start somewhere and many start  with low budget, humble beginnings. So when I get to see a film that is obviously a labor of love and a DIY  project, I am interested. I also understand that such projects can come with warts, some worse than others. This one has a lot of big hairy warts  . . .  with a lot of puss.

Hank vs. The Undead is a very low-budget affair that tries to tap into the horror comedy vein; something like Tucker and Dale vs. Evil, I suppose. The film tries to set up the character Hank as the cowardly hero that ends up fighting off zombie hordes. In reality it just seems Hank is alive only because his name is in the title. 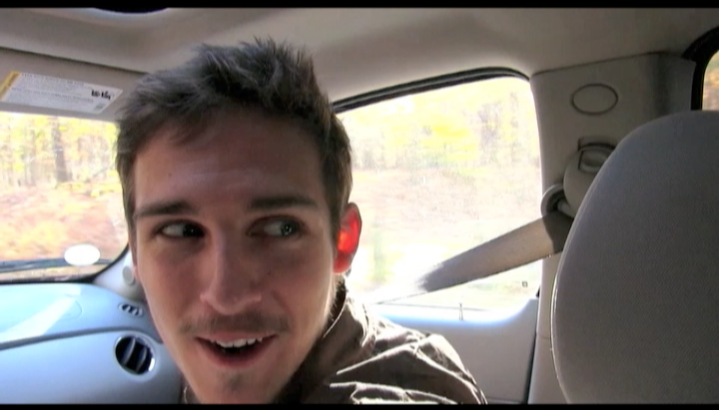 While I appreciate the attempt of Hank vs. The Undead, the film is ultimately filled with too many problems to make it enjoyable, even for a film that is a DIY project. The humor doesn’t ever really take off, though it tries several times to be witty. For example, a  zombie text messages Hank telling him he is going to die, some of the friends try to be funny, and the character of the mayor is  used as “the funny asshole guy” (which, as little as he was in the movie, was one of the more likeable characters to me).

The logic holes are also so big you can drive a truck through them, even for a movie like this.  Some examples are:  How did Hank’s friend get infected? By drinking the bad whiskey or did I miss something?  Does only having the same three zombies for most of the movie constitute a zombie apocalypse?  Hank and Greta get in a car and drive away from their zombie friends. They drive for some time but crash when they swerve to miss a zombie in the road. Oh, they are now being chased by the same three zombie friends they just drove away from to escape. How did the zombies gain that much ground on them?’ 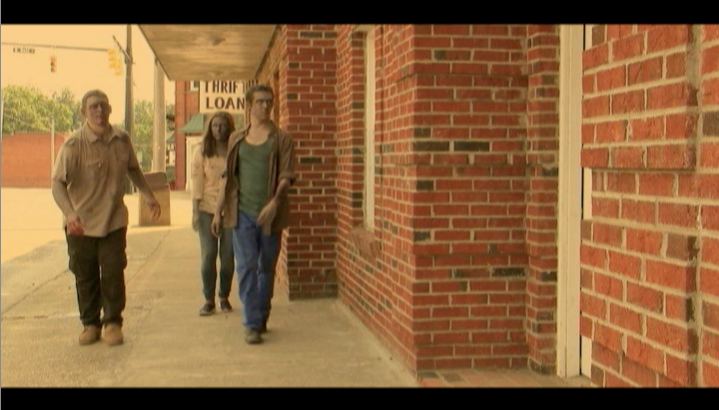 Other questions and thoughts I have  include: Zombies appear and kill people right out in the open when they were nowhere to be seen just a few seconds before; why did no one see them coming?  Night turns to day really quickly,  I see.  Why did that hobo just let that zombie crush his head?

Also, the editing is not the best, which leads to some of the issues I mentioned above. Some scenes go on too long while others make it appear as if  people teleport around and leave the viewer wondering, “How did they get here so fast?” 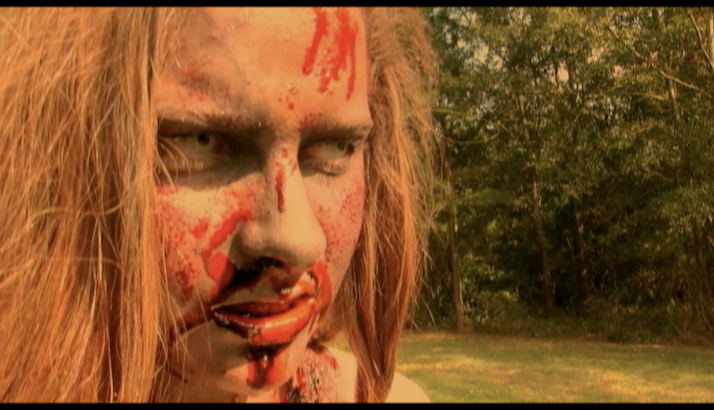 The CGI is somewhat typical of what you would find in a home movie like this, so I am not going to bash on that too much, but there is one scene that I do have to point out. There is  a  vacuum cleaner fight with a zombie where a hole gets torn in the zombie’s abdomen and you can see through it. This  looks like a bad cut-and-paste from Photoshop or something.  I couldn’t help but laugh, and not in a good way. I know the budget for CGI in films like this are basically zero, but if given the choice as the  director, I would have just left that part out.

Hank vs. The Undead really does come off like a couple of high school kids took a home video camera and had fun in their backyard and at a state park. That I can appreciate; unfortunately, the film wasn’t done by a group of high school friends, but by people that should be a little more experienced in some things, at least in terms of writing and logic. 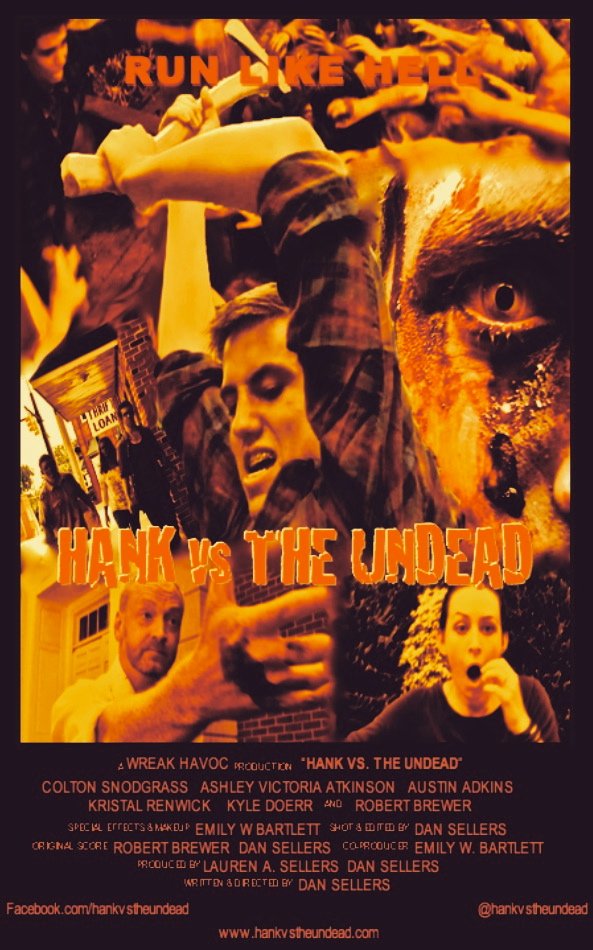 There are good low budget indie films out there, like Music Store Massacre, and I wanted to enjoy Hank vs. The Undead the same way I did that one, but ultimately it was filled with too many problems to enjoy it effectively. I have to recommend that others give it a pass.

Hank vs. The Undead: 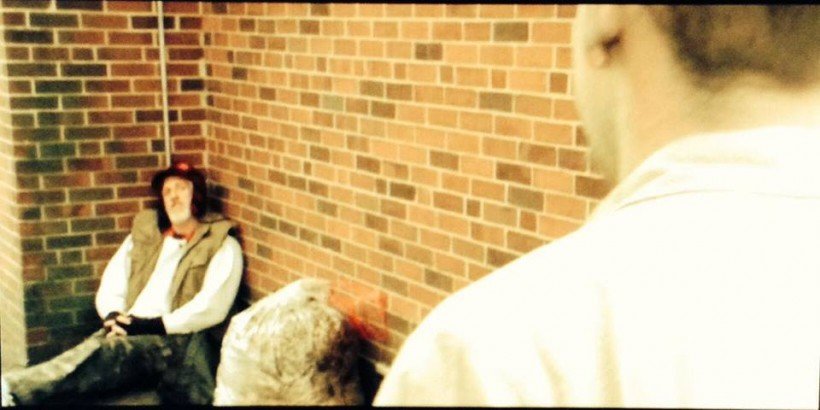 EDITOR’S NOTE: Horror News Radio listener and fan, Sammie Cassell, is featured in the cast of Hank vs. The Undead as “The Hobo.” Wreak Havoc Productions – the team behind this flick – are also responsible for Sammy the Comic Book Man, a documentary about Mr. Cassell “who uses his love for comics to teach school kids about the wonders of reading and creativity.” Hank vs. The Undead comes out October 3, 2015.

[Review] How to Be Alone (Popcorn Frights): Horrors of the Mind Haunt a Woman in Her Empty Home

Fears and anxieties about isolation and loneliness haunt twentysomething Lucy (Maika Monroe of It Follows and Villains, in another fine performance) during a long night in writer/director Kate Trefry’s psychological horror short How to Be Alone. What scares us most is often what we concoct in our minds, and Trefry combines that idea with absolutely […]

“Deathly Presents” (2015): Family Discovers a Gift That Keeps on Taking

Although many folks get irritated when stores start setting up for Christmas even before Halloween, I posit that any time of year is a fine time to watch Christmas-themed horror. The UK short film Deathly Presents is a superb offering in this subgenre. Written and directed by the team of Ben Franklin and Anthony […]

Paul Cardullo returns to discuss another Film Festival Favorite, Family Possessions (2017) from director Tommy Faircloth. We’ve covered the film before online and in our Gruesome Magazine print edition but Paul provides a new perspective from not only GenreBlast Film Festival but from Wreak Havoc Film Festival as well and compares the two experience  giving […]