Fathom Events, in conjunction with Turner Classic Movies (TCM), has been presenting a series of classic movies in theaters across the country. It’s a great opportunity for moviegoers to experience these films on the big screen, whether for the first time or as a revisiting. For example, Jaws (1975) was shown in June as part of the film’s 40th anniversary. I had seen Jaws in a theater during  its original release, but it was great fun to experience it once again on the big screen, especially after listening to the two-part Decades of Horror podcast featuring Jaws. 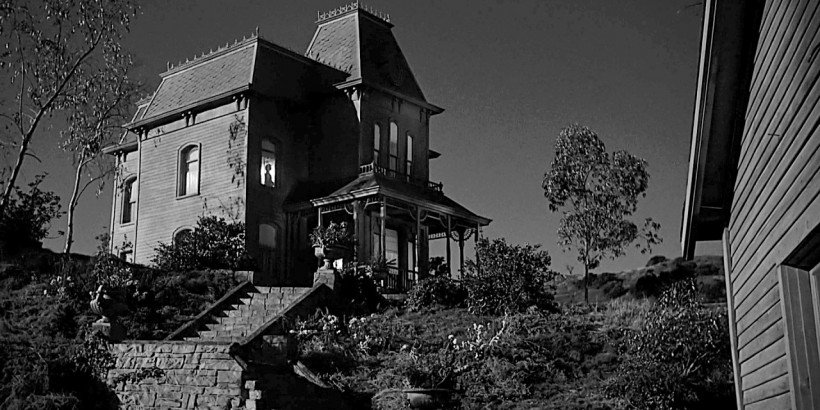 I was excited to learn that September’s Fathom Events/TCM offering was Alfred Hitchcock’s Psycho (1960). I was seven when  the film was originally released and had never before seen it in a theater. My wife is not a horror/terror fan and Psycho’s score (more about that later) in particular gives her the heebie-jeebies. Consequently, I expected to be flying solo to the screening, but I decided to see if my 13-year-old granddaughter was interested. Her response? “I’ve always wanted to see that!” She assured me it would be okay with her dad (my son), so we were set. But when her 11-year-old sister got wind of our plan, she too was interested. After assuring her there were no ghosts (they give her nightmares), no swearing, and very little blood, she was on board, too. So off we went to take in the Sunday matinee.

I was in heaven! From the moment that Bernard Herrmann’s score began and Saul Bass’s titles sliced and slashed across the screen, to the chain-winch withdrawal of the body-carrying car from the swamp in the final scene, I had a silly grin on my face.

For me, the original Psycho has always been one of those rare movies that is a near perfect melding of story, cinematography, score, directing, and acting. Without Robert Bloch’s source material;  Josef Stefano’s script,  Alfred Hitchcock’s vision,  Bernard Herrmann’s score,  Saul Bass’s titles and storyboards, John L. Russell’s photography, George Tomasini’s editing, or the performances of  Anthony Perkins, Janet Leigh, and Vera Miles, Psycho would not be the classic it has rightly become. Even though the film was generally panned critically at its release, it was being referred to by the same critics as a classic within a couple of years.  And, with the exception of George Tomasini, all this using the crew from his television series! 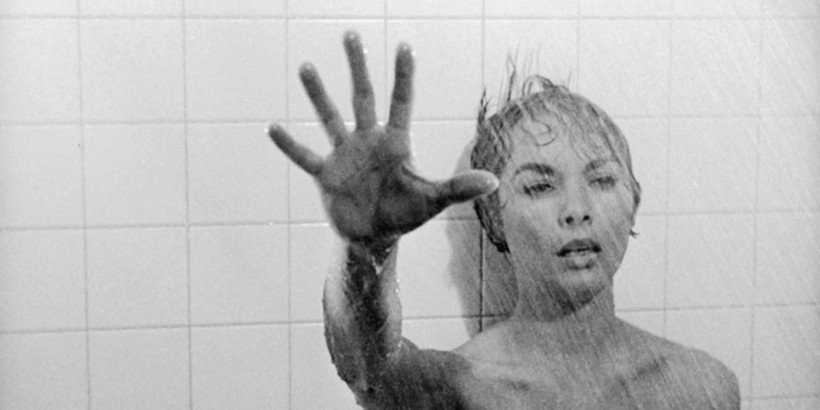 As I watched the story unfold on the big screen, I was again impressed by Hitchcock’s attention to detail. When Norman invites Marion Crane into his parlor for lunch (“‘Will you walk into my parlour?’ said the Spider to the Fly . . .”), he is repeatedly framed between two stuffed birds of prey above him on the wall. In one cut, he is even shot looking as if the spread wings of a stuffed owl are sprouting from his head. I was reminded of similar, but more surrealistic, shots from the recent NBC television series, Hannibal.

I was also impressed by the amount of detail shown when Norman Bates cleans up the mess his mother has made in the motel’s room #1. In shot after shot, the money wrapped in the folded newspaper is shown in the background or foreground, building the suspense as you wonder if Norman will find the money or not.

Another technique that struck me was the use of music to indicate the danger of discovery when Marion Crane is leaving Phoenix with the stolen money. First, when she encounters her boss in the crosswalk and then again, when the police officer discovers her on the side of the road, Hermann’s frantic score ramps up, building tension, as if to indicate Marion’s escalating heart rate. I was immediately reminded of Stephen Spielberg’s use of John Williams’s score to indicate the presence of the shark in Jaws. 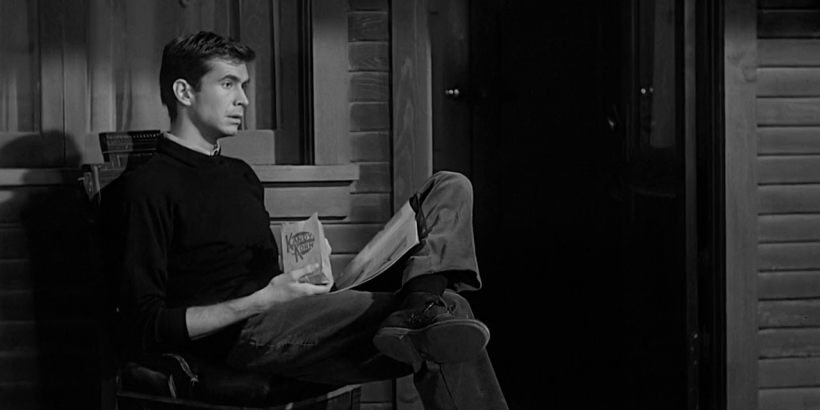 The two most famous scenes of the film — the shower scene and the mummified mother reveal — did not disappoint.  The shower scene was far more impressive on the big screen! It is the perfect combination of editing, photography, and score. As Stephen King wrote in his non-fiction work  Danse Macabre, “Here is a movie where blood was kept to a minimum and terror was kept to a maximum. In the famous shower scene, we see Janet Leigh; we see the knife; but we never see the knife in Janet Leigh. You may think you saw it, but you did not. Your imagination saw it, and that is Hitchcock’s great triumph. All the blood we see in the shower is swirling down the drain.” And if you thought it was almost as if the knife was shredding the screen, according to Donald Spoto in his book, The Dark Side of Genius: The Life of Alfred Hitchcock, Hitchcock added the following note to shot 116 of the screenplay: “The slashing. An impression of a knife slashing, as if tearing at the very screen, ripping the film.” Hitchcock’s success in realizing the vision of this note is as impressive as the vision itself.

When it came to the mummified mother reveal, the slowness with which the scene unfolds was almost excruciating as you become Lila Crane walking down the basement stairs, crossing the basement and opening the door, approaching the figure in the chair, reaching out to touch the figure, and watching the figure’s slow revolution to reveal Norman’s mummified mother with empty, but still staring, eye sockets. The scene then immediately erupts into frenzied activity as Lila throws back her hand, sets the light bulb swinging, and screams. Norman as mother appears and rushes down the stairs with a knife, immediately followed by Sam Loomis (John Gavin), who wrestles Norman/Mother into submission as he/she writhes and grimaces maniacally. 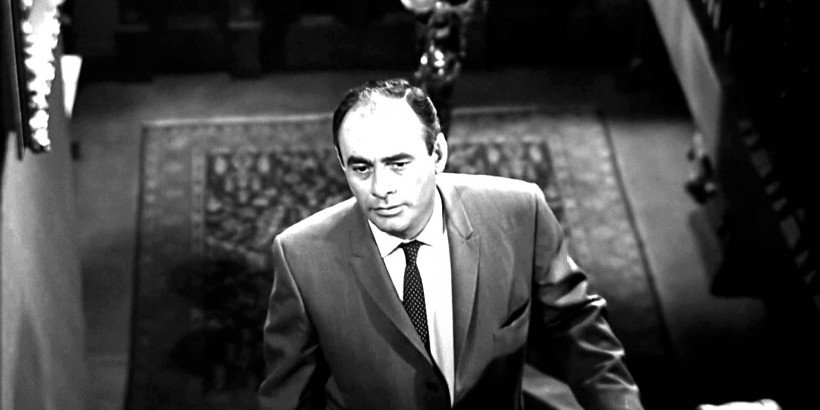 Not as impressive today, but in hindsight, possibly the most iconic scene in Psycho  is the sequence where Marion Crane tears up her note containing calculations of the cash remaining from her theft, and flushes it down the toilet. Believe it or not, this  was the first film to include the sight and sound of a toilet flushing. Before  that, the Motion Picture Production Code had held a tight rein on the depiction or any hint of bodily functions. Many viewed “the flushing” as the final death knell of this type of overbearing censorship.

Again, not as obvious in today’s culture, Hitchcock’s masterpiece is an amazingly progressive film dealing with a multitude of societal taboos: matricide, transvestism, voyeurism, promiscuity, theft, mental illness including  schizophrenia, and yes, even a toilet flushing.  Astonishingly, the film’s leading lady, Janet Leigh, is killed less than half-way into the film. Then Hitchcock manipulates the audience into transferring their sympathies to Norman Bates as you hold your breath while the car carrying Marion Crane’s body hesitates before sinking out of sight into the swamp. Remember, when the film was first released, you didn’t know the denouement. Hitchcock wanted you to think of Norman Bates as the victim of an insane, oppressive mother, the poor boy.

I truly wish I could have experienced Psycho in its original setting, a 1960 cinema; not knowing what I was in for or how the story turned out; with the morals and taboos of the time; the “…no one will be seated after the start of…” restrictions; the resulting lines of moviegoers; the uncertainty of what comes next; the shock and terror of the shower scene, Arbogast’s murder, and the big reveal; the admonition as you left the theater to NOT reveal the ending to anyone. On the other hand, I am fortunate enough to experience the art of a master in the medium for which it was intended and to share that experience with two of my grandchildren. 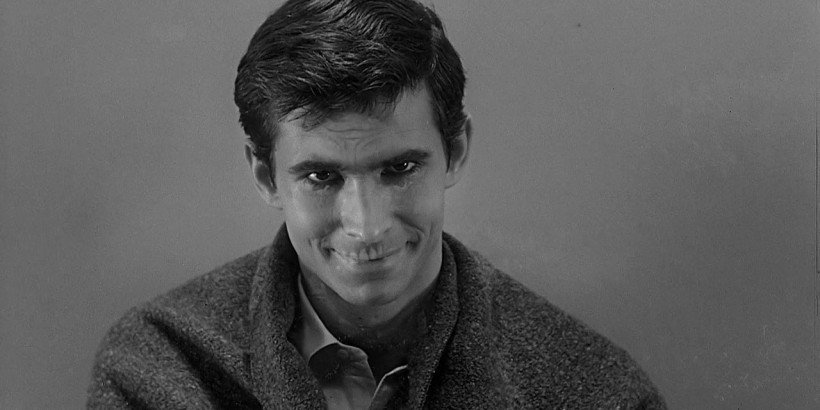 Back to the grandmunchkins that accompanied me to Psycho. The 13-year-old had heard of the shower scene but didn’t  guess the “Norman as mother” twist. I had showed a picture of Norman’s mother’s remains to the 11-year-old in advance as an example of the “scare-level” in the film, so she was able to figure out what was going on before the big reveal.

When I asked the girls for a rating on a scale of 1 to 10, the 13-year-old gave it a 7, explaining that she was more used to modern movies. The 11-year-old gave it a 9.5 and said, “I loved it!” Both claimed it wasn’t scary, but agreed that there was a lot of suspense and tension. The 11-year-old also admitted to jumping during the shower scene and closing her eyes during the mummified mother reveal. She loved the level of detail with which the story was told and wasn’t bored at all.

Since watching Psycho, both of my granddaughters have taken showers without incident. Their education continues.

Fathom Events/TCM’s next horror offering is a “Dracula Double Feature” with both the original 1931 English and  Spanish versions on Oct 25 & 28, 2015.

A female slasher – something that this genre has been missing for way too long but that is all about to change.   Indie super duo   Shawn Burkett and […]

Exclusive Clip – ‘War Of The Worlds’ – ‘Bill And Helen’

BUT Film Festival (BUTFF) is announcing its line-up of special guests, movie screenings, music shows, and performances. The festival takes place between August 31 and September 4 in Breda, the […]