Just when you thought Fear the Walking Dead  couldn’t get any worse, IT DOES! I’m officially what the kids call “a hater” of this show and it’s not that I’m jealous. Wait, maybe I am because I have some crappy ideas that can be considered for TV shows too, if AMC is interested. However, here are  two things this show is good for: encouraging bad actors everywhere that there is indeed hope and inviting the sandman to bring on that sweet, sweet slumber.

Episode 4, titled “Not Fade Away,” opens 9 days after the last episode. We find Nick laying on an inflatable cushion in the pool,  Travis heading out for a jog and , while he narrates, Chris shooting a video from the roof of the house. As the camera pans away, we now see that the town is fenced in with a live-in military presence. As Chris continues  narrating ad nauseam, he spots someone either reflecting light from a mirror or using a light to get his attention in one of the infected zone homes far beyond the fence line. 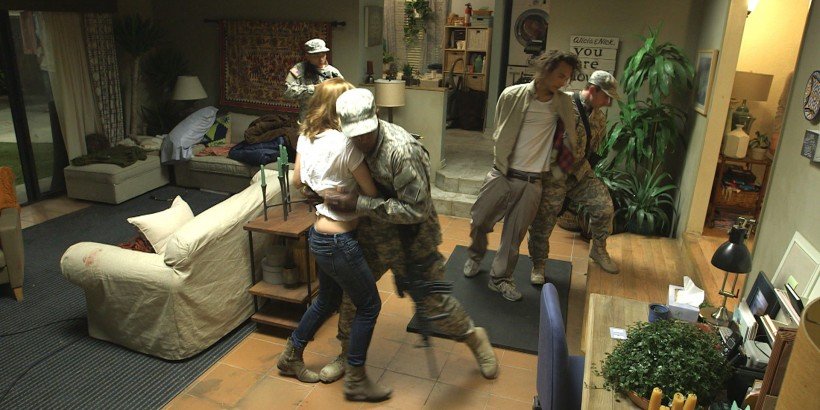 Inside the house, Alisha and Madison share some forgettable dialogue as Travis comes in from his jog. Chris tries to show the video to a dismissive Travis, I wonder why there is such a strain on this relationship. Madison goes out to offer some “meds” to a surprisingly calm Nick who refuses, insisting she  give them to Griselda because she needs it more than him. Kind of weird but this will rear its ugly head again later.

Travis makes his way down to a meeting with the military in charge of this zone where they apparently hand out orders and rations. Lieutenant Moyers, played by Jamie McShane, goes on to say that the infection-free zone is a six mile radius and goes on to give a briefing of the state of things before   he dismisses the crowd, telling them to be nice so he doesn’t have to shoot them. He meets separately with a reluctant Travis urging him to help  convince a uncooperative neighbor who needs to get tested to comply. This guy reminds me of Bill Paxton’s character Chet from Weird Science, hopefully he will start giving out some wedgies! Despite horrendous acting, the line delivered by Moyers is  giggle worthy –  “you talk him down or I take him down!” You can imagine how upset this made sweet little Travis.

Travis reluctantly agrees  and heads to Doug’s home only to find the family in Level C HAZMAT gear with Doug hiding in the bathroom. Travis, of course, convinces Doug to “do the right thing” then assures the family that everything is going to be “OK.” What a sweetheart! We then flash to Alisha snooping at the neighbors house so she can go emo and cut the tattoo that her now zombie boyfriend drew on her so she will always have it. She’s brilliant and oh so hygienic. Cue Liza playing nurse to the neighbors — I told you how talented this cast is! Chris is now working on convincing Madison to take action with the video he shot while Nick is up to something. What? I’m so glad you asked! We now find out where the laid back demeanor came from, he sneaks into the sick neighbor’s home, hides under his bed and steals his morphine drip placing the needle between his toes. Smart move, he can hide the track marks. This further illustrates why I’d like to smack this guy around, hopefully he will get his, and I have a feeling its coming. 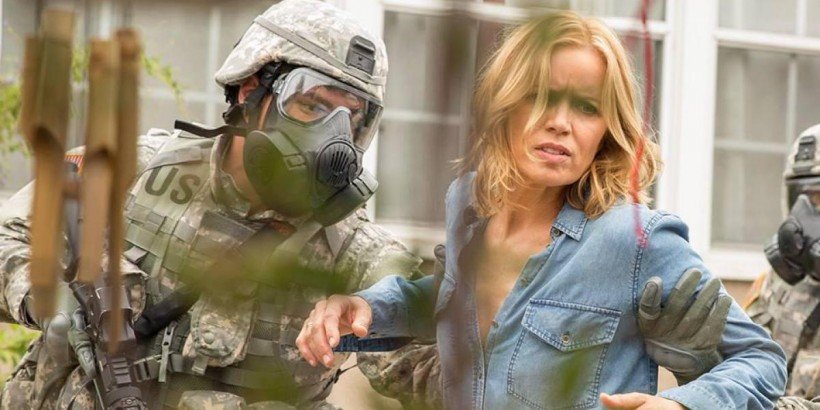 Where’s Ophelia in all this? She’s busy faking interest in a military boy, trying to get the hook up for extra meds for mom. Poor Travis and Madison have been arguing a lot so they find time for a little make up “boom boom” in the car parked in the garage. After their tender moment, they get into argument over Chris’s video. Doug’s wife Maria shows up and tells Travis he’s missing. Travis heads to the phone both to put on his suit and cape and off to the rescue he goes. By this point I am thinking of how angry I was that the Eagles lost and how much more enjoyable that was instead  this miserable show!

Madison, now on the roof signaling to Chris’s “friend,” receives a signal back while Travis, of course, finds Doug’s abandoned car. Travis goes to the perimeter and finds Moyers who is nonchalantly hitting golf balls. Travis asks about Doug. Moyers says Doug’s a “head case”  and  refers to Travis as the “mayor.” Travis tries to convince him of the signal from outside the fence but the Lieutenant  dismisses it.

Liza goes to neighbor’s house to check on a sick Hector but the military took him for “treatment”. At this point,  there is another boring exchange with a military doctor, Bethany Exner played by Sandrine Holt who shares she  knows Liza is a fake but yet asks her to keep up the charade. Madison decides to cut the fence and take a stroll through the infected zone to look for the person sending signals. She sees and smells a lot of dead bodies lining the streets that do not appear to be infected. A military convoy rolls through and Madison takes cover under a jeep next to a corpse. Back at the Clark’s residence, Doc and Liza are treating Griselda and they decide she needs to be moved for surgery – Daniel wants to tag along. Doc and Liza find Nick strung out on a lawn chair and he tells Doc he does not need methadone because he kicked his habit. She quickly realizes he is lying. When confronted, he tries to lighten the mood by noting how attractive she is. Looks like Travis has competition in the smooth category. 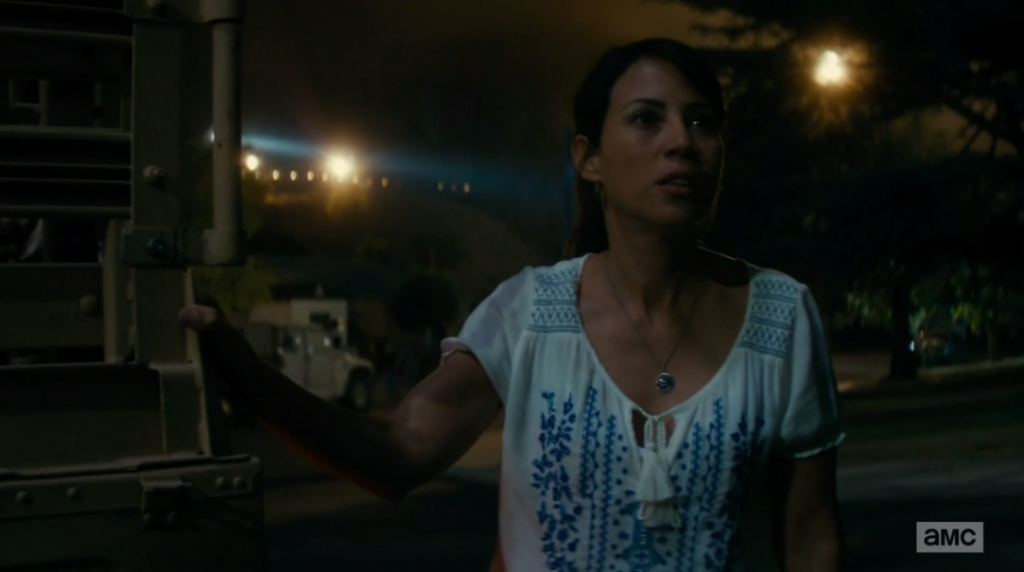 Madison arrives  home from her excursion where she talks to Daniel about what she saw. He counters with a story of sick people taken by the military for treatment when he was a kid, the next time he saw them they were floating at his favorite fishing hole. He then reiterates “it’s going to happen quick” and that he wants her to take care of Ophelia and keep Nick close. Madison then makes her way to the neighbors and encounters Nick looking for some sticky icky and then it happens, the greatest moment of the show — she slaps the ever loving crap out of him!

We come back from commercial to find a pouting Nick in the bathroom licking his wounds while Alisha is asking to come in and comfort him, hugs all around. The military then shows up with their orders to take two from the home. Griselda and Daniel? Nope, Griselda and Nick. Alisha looks at Nick and tells him to run – he darts out of the house. The military starts roughing up some of the cast  and they take Griselda. Not long after, they throw Nick in the back of a truck. This makes Madison blame Liza for ratting out Nick while Alisha reads a tender letter under her covers and Travis sitting on the roof spots a signal from the infected zone, fade to black.

Happily, there are only two more episodes of Fear the Walking Dead to go. I really had to fight the urge to change over to the Packers game. Once again, the name of the episode plays well for me with the title being “Not Fade Away.” This show is fighting not to, but, unfortunately, it is fading fast. This atrocity was directed by Kari Skogland who is probably best known for her award winning commercials and music videos. After seeing this episode, I think she should stay within her wheelhouse. The episode was written by Meaghan Oppenheimer, it is only her third writing credit and boy did it show. The only reason I am giving this a bit of a rating is because Nick finally took a whooping! There are only two episodes left which brings me some solace. Much like the little train says, I keep telling myself “I think I can, I think I can.”

Fear the Walking Dead “Not Fade Away”

It’s a mad, mad, mad, mad world for university student Quincy (Bailey Ingersoll), whose day starts off with a dissection lesson from an overenthusiastic professor (David A. McElroy) in her […]

A rich and ruthless business tycoon, Cyrus DeKalb (Ray Wise), informed that he only has so long to live, gathers together his estranged children for a final family meeting, but […]

Before you embark on a journey of revenge, dig two graves. – Confucius To what lengths would a young girl go to see her deceased brother once again? How much […]