Attack On Titan takes place in an unspecified future, a future in which humanity has been beset upon by a race of humanoid giants known as “Titans”. These beings are (as their name implies), much larger than normal humans and feed one one thing – us! But after a prolonged struggle some 100 years ago, humanity managed to best these beings by building three circular walls. Concentric in nature, these walls are taller than the tallest of the Titans, and there has been nary a peep from the other side of the walls for the last 100 years. After a brief animated segment showing what I just described, the film gives the viewer a look into what humanity has essentially devolved into, with humans living a hardscrabble existence, trying to make ends meet.

We are then introduced to Eren (Haruma Miura), Armen (Kanata Hongo) and Mikasa (Kiko Mizuhara), three lifelong friends who decide (with some prompting from Eren), to scale one of the walls and see what the world looks like beyond the walls. As it has been a century since mankind has lived behind the walls, entire generations have been born without ever having seen a Titan. All they know of the Titans comes from stories they’ve been told. Eren has doubts, and convinces his friends to join him and discover if the legendary creatures actually exist. But, in what has to be a case of the worst timing ever, on the day the trio make their move to scale the wall, the Titans reappear. And they’re very, very hungry indeed. 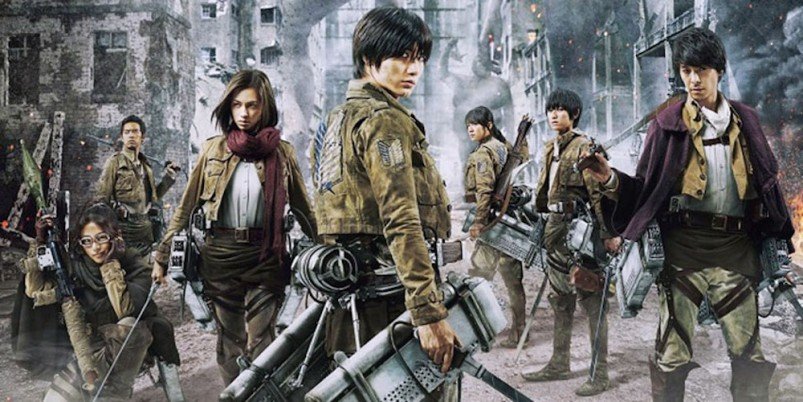 The first Titan we see, is far taller than the walls could ever hope to contain. In fact, a Titan this large has never been seen before! It seems to be aflame, with billows of dark, acrid smoke coming forth from its body. But it doesn’t attempt to climb over the wall, instead it kicks a hole in the wall that’s closer to ground level. Once that hole is kicked through, it backs away, and the smaller Titans begin to pour in through it. These Titans definitely resemble humanity, there are both male and female Titans coming through the hole. But they’re nude, and don’t have any nipples or genitalia whatsoever (although the female Titans do sport breasts). As they come towards what’s left of mankind, there’s a genuine sense of psychotic glee to their faces, as if they’re about to partake in the greatest “All You Can Eat” festival ever witnessed. 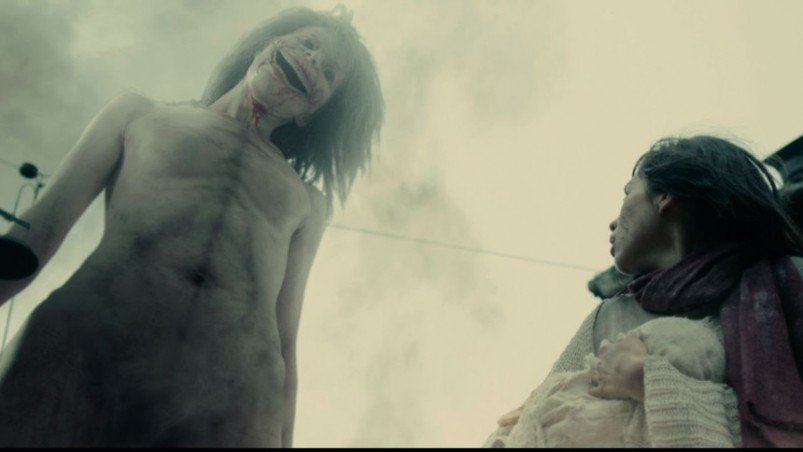 It’s during these scenes of genuine carnage where  Attack On Titan truly shines. I can genuinely say that the appearance of the Titans, and their maniacal joy in picking people up by their arms and dropping them into their mouths are some of the creepiest scenes I’ve watched in a long time. Additionally, many of the Titans have some sort of facial deformity. More than a few of them have eyes set widely apart, or heads seemingly too big for their bodies. But the most terrifying of the Titans are the ones with an odd rictus grin on their faces. If any of you are familiar with William Castle’s 1961 film Mr. Sardonicus, then you’ll understand what I mean. The Titans with the horrifying grin, are among the most terrifying creatures I’ve ever seen in a film, and are definitely the stuff that nightmares are made of. It’s even more terrifying when they happily reach into a crowd and grab some poor soul to snack on. 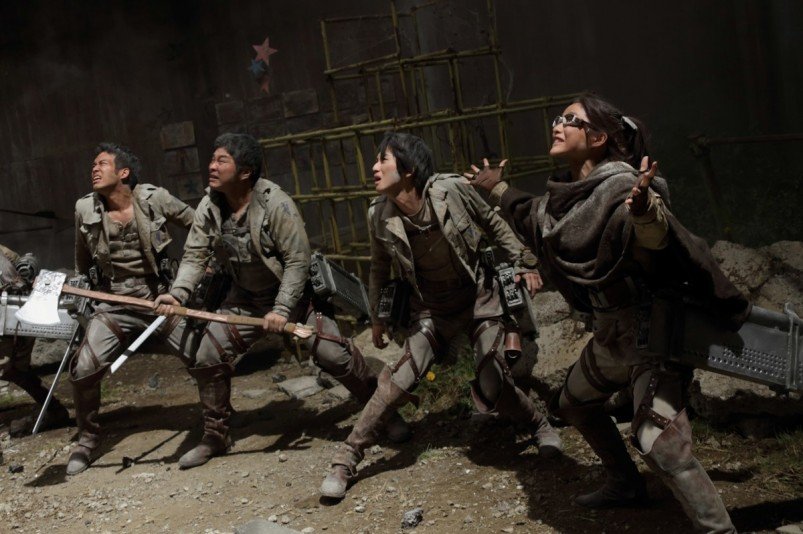 Two years after the attack, what’s left of humanity has retreated behind the second wall. There isn’t as much space behind this section, and food supplies are dwindling away. An army is formed with the intent of repairing the hole in the outer wall and retaking the land lost to the Titans. The invading force is armed with swords, and a new device called 3D Maneuvering Gear, which looks like an exaggerated, gas powered grappling line that can be used to swing onto (& around) the wall – and the Titans. 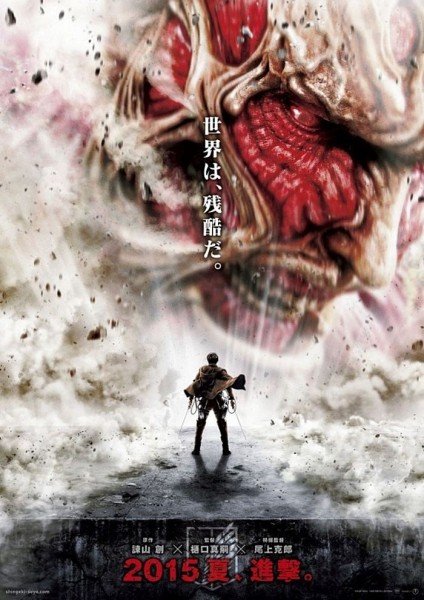 To be fair, I must admit that I have not read the manga, or seen the anime that this live action film is based on. According to what I’ve been told, this film is nowhere near as good as they are. But I think I can agree with those opinions, even without having seen/read those versions, because as it stands Attack On Titan is a pretty turgid affair to sit through. Director Shinji Higuchi and writer Yuusuke Watanabe have taken (what I understand to be) a tight, emotional and action packed story and turned it into a pretty dull film. As I haven’t seen the anime or read the manga, I can’t be too sure about this, but I’m sure that the characters there can’t be as stupid and asinine as the ones here in the film. Attack On Titan is one of those films where the characters don’t notice or hear cannibalistic humanoid angry titans (CHAT’s maybe?), until they’re practically right next to them. And the battle scenes between the Titans and the humans are edited in a very slapdash manner, making the fight scenes look/feel very disjointed. The performances are about on par with what I’ve seen in Asian soap operas in the past. That’s to say uninteresting at best and histrionic at worst. None of the actors make any impact here, and as I said earlier, they’re all so stupid I didn’t really care too much for them after about 30 minutes.

But there’s always that first sequence in which the Titans make their initial appearance to savor over. I’m not kidding when I say it disturbed me to no small degree. The Titans themselves are nightmarish and fearsome. The CGI used in these scenes isn’t the best you’ve ever seen, but it’s effective enough to get the point across. Additionally, there is a copious amount of bloodshed during these scenes that I wasn’t expecting. The sound design in the film is highly effective as well, with the strains of delighted Titans feasting on humans being some of the eeriest sounds I’ve ever heard in a film.

Attack On Titan is the first of a two part feature, and it ends with the promise of a massive battle to be seen in the second film called End Of The World. While I can’t say I enjoyed the film as much as I had hoped to, it does have enough going for it that I’m curious to see what the second half brings to the table.

“Return of the Killer Tomatoes!” (1988): Surprisingly Tasty Sequel to the Cult Classic

It is 1978 and writer/director John De Bello, along with his co-writers Costa Dillon and J. Stephen Peace, release Attack of the Killer Tomatoes!, a spoof of 1950’s low-budget monster […]

“Well, we can all agree that the third one is always the worst,” says Jean Grey (Sophie Turner), shortly after leaving a screening of  Return of the Jedi with fellow […]

The first time I watched the troubling Canadian short horror film Heir, I knew nothing about it going in except that it starred renowned independent horror film actor Bill Oberst […]