THE VISIT is the latest effort from once-popular director M. Night Shyamalan. Sneaking into theaters with little fan-fare and low expectations – but an interesting marketing campaign – the film is a low budget, found footage horror exercise released through Blumhouse Productions. Mentioning that the film is from this particular director is typically met with chuckles and contempt among horror fans and movie critics given his recent track record of critical duds and box office disasters. However, THE VISIT  has something up its sleeve, a twist that is not in its plot but in its execution. It has a wicked sense of humor and a demented sense of fun making it Shyamalan’s best film since Signs (2002) and a real treat for horror fans. The film benefits from a strong cast, primarily Deana Dunagan as Nana and Peter McRobbie as Pop Pop, as well as the two younger leads Olivia DeJonge and Ed Oxenbould. Shyamalan also smartly weaves his fiendish plot around a found footage conceit that feels natural and earned. THE VISIT   is a surprise horror gem that should thrill horror fans and make new ones along the way. 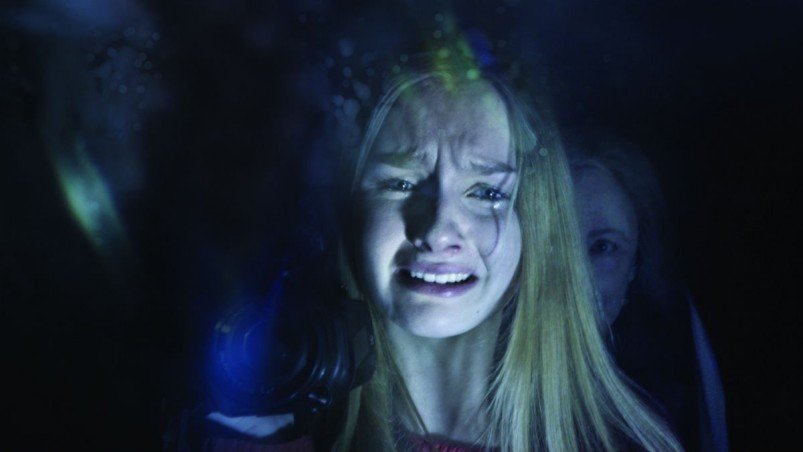 The plot for THE VISIT is devilishly simple: a recently divorced single mother reluctantly sends her two young children off to spend a week  with her parents, with whom she has a woefully dysfunctional relationship, having not spoken with them in nearly 15 years. The  eldest, her daughter Becca (DeJonge), insists that she and her younger brother, Tyler (Oxenbould), go on the trip. Becca has a plan. She is studying to be a film maker and wants  to apply her passion by  creating a documentary about her mother’s childhood while visiting their grandparents, Nana and Pop Pop. She is looking to capture the magic “elixir” that will repair her mother’s relationship with her parents…and perhaps her own issues with her absent father, as well.

Things go well at first, even with the grandparents’ strange requests about staying out of the basement (because of  mold) and a way-too-early-for-teens curfew of 9:30 each evening. Nana and Pop Pop behave strangely but all is explained with age as the siblings struggle to understand their grandparents actions and idiosyncratic demeanor. As the week goes on, Nana and Pop Pop become stranger and stranger, especially when caught running naked through the house late at night. Desparately wanting to recapture a sense of family, Becca and Tyler let things escalate far beyond their comfort zones until they beg their mother to come get them. It may be too late. 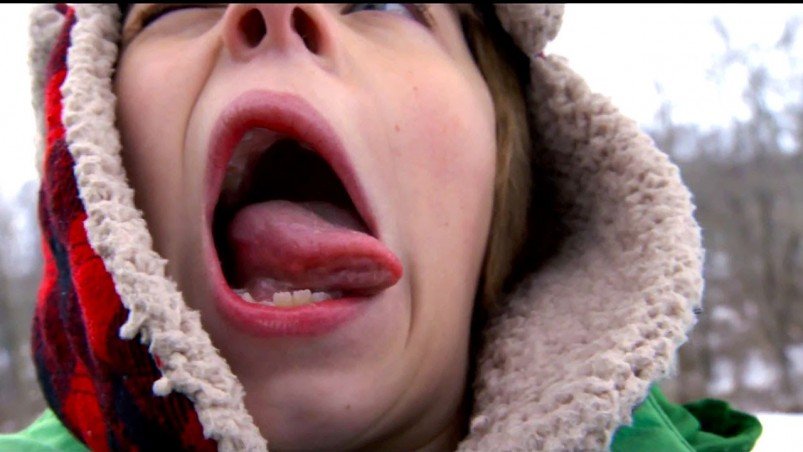 M. Night Shyamalan’s script for THE VISIT is never too far fetched as it explores  how children view their elders, struggling to understand their battles with age, dementia, illness and mental decline. He resists going overboard, reaching just far enough into the strange and bizarre to make Nana and Pop Pop creepy and, at times, utterly frightening. The tone is quirky and unhinged, using an increasing level of “crazy” to color the grandparents as a pair of damaged souls placing the children in believable peril. By setting up the first meeting between the grandparents and the grandchildren as a mixture of  the expectation of unconditional familiar love and bonds combined with an earnest yearning by  the kids to recover a lost sense of family, the story keeps  the events moving in a dastardly forward motion toward a deliciously delirious conclusion. The horror is simple, free of gore and outrageous violence but strange enough and tense enough to create a loud vocal response from the audience at just the right moments.

The film has plenty of laugh-out-loud moments and they happen for all the right reasons, as they are intentional, crafted and realized. THE VISIT  has a wonderful sense of fun and humor, mostly because it is  presented entirely from the kids’ point of view through the found footage approach. Every event is shared from their perspective, nervous trepidations and natural curiosity and fears keeping the tone light enough but never undermining their jeopardy. This is not Michael Myers or Jason Voorhees, this is more like the Smiths from Motel Hell or the Log Lady from Twin Peaks – if the Log Lady wanted to smack you on the head with that damn log until you bleed…profusely. Their stories, shared during interviews, and explanations of their bizarre behavior are weirdly wonky and sensationally sideways, producing nervous smiles and increasing concern. Yet, each day after, the kids remain able to make fun of what they see the night before, until…well, that would be telling. 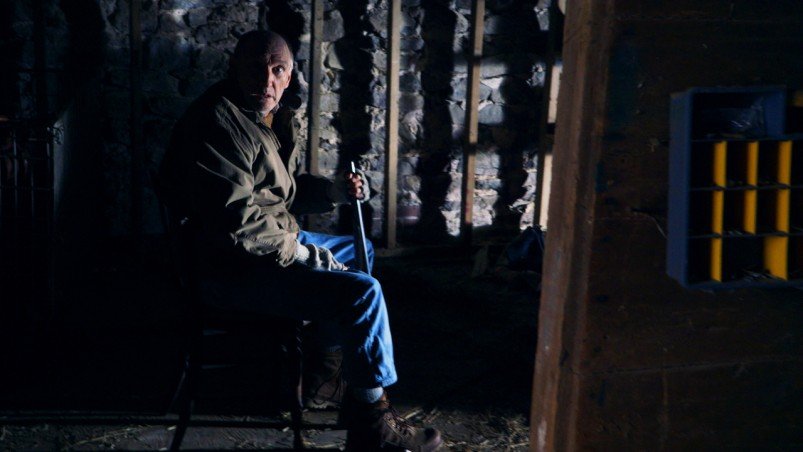 It helps that Olivia DeJonge and Ed Oxenbould feel like siblings and behave like kids do. Their dialog may be beyond their years from time to time, but their recent childhood is troubling just enough to make it acceptable. Their motivations drive their actions and their characters are given quirks and depth most films of this ilk miss entirely. Even though Tyler borders on annoying from time to time, he and Becca are refreshing and funny, making for the best protagonists M. Night Shyamalan could hope for.

But THE VISIT  belongs to Deanna Dunagan and Peter McRobbie as the unusual grandparents Nana and Pop Pop, especially the more insane they become. Dunagan shines when she lovingly humors the kids, providing yummy baked cookies and cakes and sitting for interviews. She slowly reveals the cracks and damaged soul underneath. When she needs to go extreme, racing around the house or crawling along the floor or scream “Yahtzee!” at the camera, she is all in, leaving the audience screaming “What the hell?!” Peter McRobbie is equally entertaining, getting one of the more memorable moments as he takes advantage of Tyler’s fear of germs. He brings a strange mix of madness and caring as he shares that all he truly wants to do  is give Nana the week with her grandchildren that she never had. His body language and manic inflection tone Pop Pop into a creepy-as-hell threat. Dunagan and McRobbie are a blast, working well together and off each other and bringing class and depth to the roles and the film. 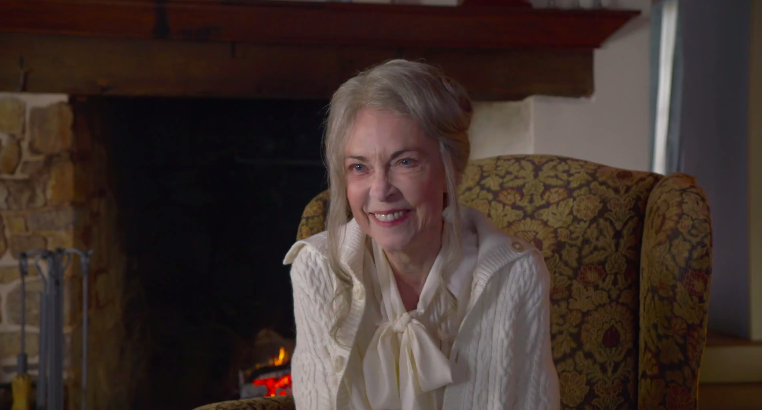 M. Night Shyamalan is back where he belongs crafting a creepy horror flick with kids in the forefront. He displays an understanding of the medium, both in terror and with found footage, to take advantage of the underlining humor and create a wickedly funny little horror gem of a film. While there is a twist in THE VISIT, one that is easily seen coming from nearly the onset, it is not the crux of the picture. That would belong to the children, Becca and Tyler, as they reach into the darkness, hoping  to save their mother’s relationship with their estranged grandparents. Deanna Dunagan and Peter McRobbie steal the film as Nana and Pop Pop, bringing a strange, memorable blend of bizarre tone and quirky beauty to their performances. Above all, The THE VISIT  is fun with a diabolical  sense of humor that provides entertaining chills, screams and laughs.

Those looking to catch up on their reading but still wanting to enjoy some action-oriented horror now can check out the new zombie novel Voodoo Child, Book One: Zombie Uprising […]

Vintage, from Witherfall, an Acoustic Ode to Heartbreak

Witherfall is a dark melodic metal band from Los Angeles. With this new EP entitled “Vintage,” they draw inspiration from 1990’s MTV and craft a mostly acoustic album. Sadly, “Vintage” […]

With her debut as a writer/director, Mai Nakanishi tackles contemporary social issues in Japan and South Korea by way of a tragic supernatural tale in the short film Hana. A […]