Anticipation is high for the upcoming season of American Horror Story and as most of you should already be aware – this season revolves around a haunted hotel.   A cool idea if they can pull it off.   Recently the full season synopsis was rolled out – have a look:

“Built in 1930 by the rich and charming but deeply psychotic James March (Evan Peters), the beautiful art-deco Hotel Cortez is, in actuality, a labyrinthine structure built to hide March’s murderous activities (think dead ends, secret rooms, endless shafts).
In present day, though, the Cortez is acquired by Gaga’s Countess, a glamorous socialite who attends art openings and fashion shows and maintains her looks not from a steady diet of kale but from imbibing human blood. The Countess is also insatiable when it comes to love and sex, which sets up a macabre love triangle between her, the similarly blood-hungry Donovan (Matt Bomer) and the newly turned male model Tristan (Finn Wittrock).
Also gravitating around the world of the Cortez are Ramona Royale (Angela Bassett), an actress/former lover of The Countess’ seeking revenge; Iris (Kathy Bates), Donovan’s mother and the front desk clerk; Liz Taylor (Denis O’Hare), a cross-dresser nicknamed by The Countess; Hypodermic Sally (Sarah Paulson), a junkie and friend of The Countess; Detective John Lowe (Wes Bentley), a cop investigating a murderer named the Ten Commandments Killer; and The Addiction Demon, a creature in the vein of Rubberman or Bloodyface, who has no eyes or mouth but does wield a nasty, conical drillbit dildo.”

October 7th debuts the madness on FX and today brings two more of the little 15 second teases that the show is so fond of sending our way.   Feast your eyes! 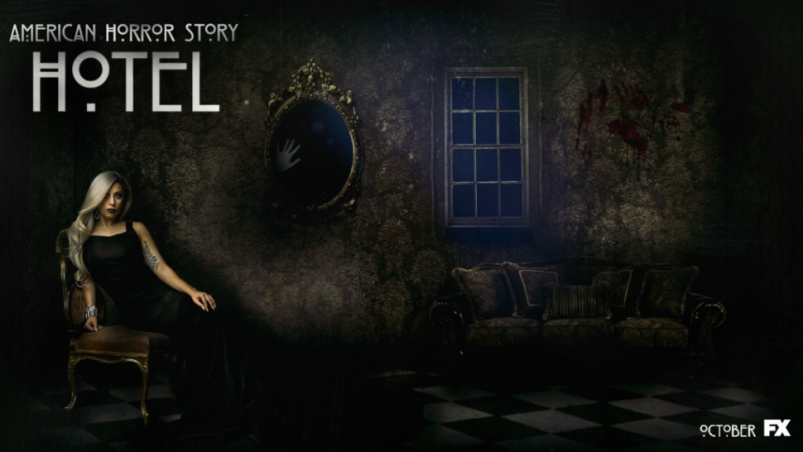 Two New Clips In Anticipation Of The Release Of ‘The Basement’

This week brings the release of the new Mischa Barton vehicle The Basement. To celebrate that fact – I’ve got a couple of new clips to tease your eyeballs. Hitting select cities and VOD everywhere – here’s all the info that the press rlease reveals: “The Basement, available on Demand and opening in theaters in […]

Just when you think it’s not possible to have your mind blown – along comes a piece of news that is nothing short of amazing.   Shudder – the all horror streaming service is teaming up with horror icon Greg Nicotero to bring us a series based on the horror anthology by which all other […]

Attack of the 50 Foot Film Fest Stomps into Atlanta

Attack of the 50 Foot Film Fest, a new “mini film fest”, is coming to the Plaza Theatre in Atlanta, GA on June 27, 2017. The festival showcases  sci-fi, horror, and suspense short films from a variety of Atlanta filmmakers. The Atlanta area has a strong filmmaking community, and it looks like there are some […]