NOTE: The following review has a WHAT IF moment that just came to me as I was writing. This just might elevate your desire to watch it.  Stick to the end to find out what is up.

Ever wonder what a kid Jason Voorhees would be like if he had a mentor or what his years were possibly like while his mother was still alive showing him how to stalk and kill others? Well, that is partially what you get with Cub, the Belgium horror/slasher film from director Jonah Govarts. 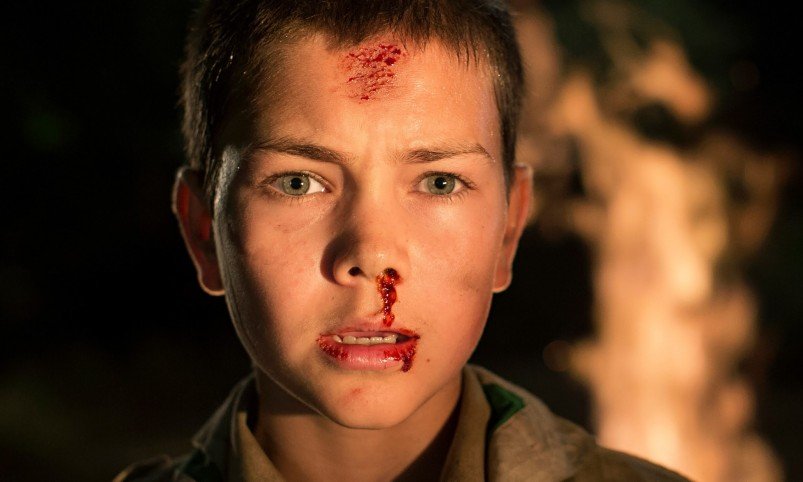 Cub  centers on a kid named Sam (Maurice Luijten) who is part of a Belgium version of the American Cub Scouts. The script  wastes no time  portraying Sam as an outsider, a kid that has a checkered or violent past. From the very beginning, the film  attempts  to place him at odds with one of the Scout leaders (Titus De Voogdt and Stef Aerts) by making him late for the departure of the Scout’s field trip. This combined with later events in the story, the film illustrates why Sam commits the actions he does but they seem out of order and more in the moment.

The Scout leaders set up the field trip to take the kids to a remote area in the countryside. They plan to scare the kids into thinking there is a werewolf creature called Kai living in the nearby woods. They convince the young scouts they have been given special permission to hunt the creature. However, the camp grounds arranged for the kids in now  occupied by a couple of Flemish assholes forcing the Scout leaders to go deeper into the woods to find another camp site. They end up in an area near a  town where a bus factory once operated but went out of business. 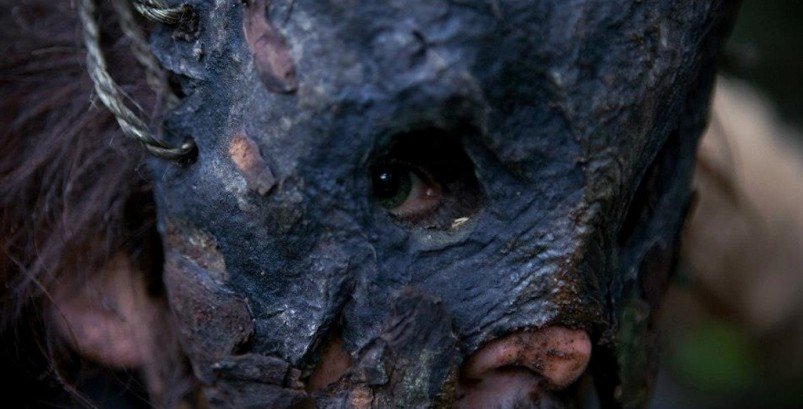 As the movie plays out, it is revealed that there is a feral kid (Gill Eeckelaert) living in the area.  It turns out the child has a father figure operating  an underground system of tunnels and surveillance systems set up to  kill any unwanted trespassers. This is part of the film I thought is  pretty fascinating. The surroundings are  set up with sensor switches alerting  the man and boy to intruders and some creative booby traps to take care of interlopers. Interestingly, the movie does not focus on the dangerous setting and strange man as  much as it does  on showing Sam make some odd choices during the film. These decisions place the whole group in danger.

Cub  quickly establishes a friendship between Sam and the feral kid. For what reason, I do not know. Sam never alerts  the Scout leaders to the presence of the feral kid either. I know the film makers want  to portray Sam as an outsider who was picked on which  drives him to befriend the feral kid. However, the film seems to do this backwards. It has  Sam make friends with the creature almost immediately, the film makers show him being treated worse after the fact, more than he was before he befriended the creature. It is these actions that get the group in some very dangerous situations. 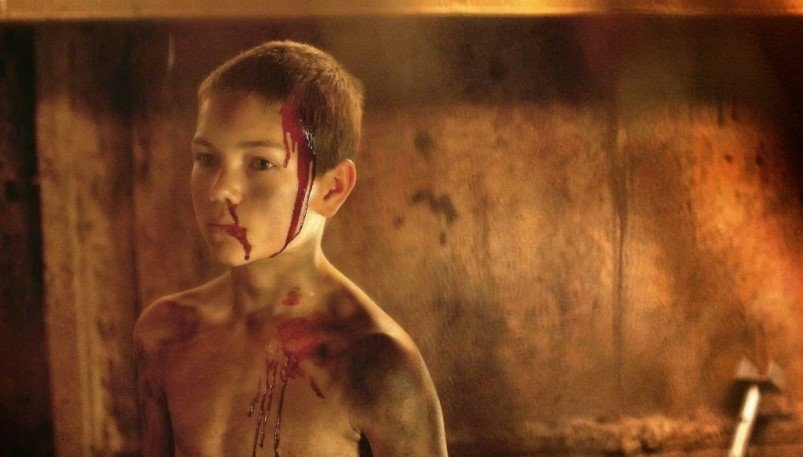 Another problem with how Cub  has is in the way it tries to portray Sam as a maladjusted kid never really explaining that much. One of the Scout leaders – WAY into the second act  – finally discloses that a foster parent requested  the Scouts accept Sam into the Scouts sharing  that he had a violent and traumatic past. This is  never explained any further other than he has a photograph that with  a face scratched out in it.

While I could possibly let this limited  explanation suffice for Sam, I cannot let it go because it leads to an  issue in explaining Sam’s attitude.  Sam never exhibits any deviant behavior in the beginning of Cub  that would link back to this past knowledge or explain why he was so quick to befriend a person that put the group in such extraordinary danger. Other than being late for the Scout trip, which is kind of normal for any kid, there is not much happening to Sam to make him “snap.”

Yes, later in the film, two other boys suddenly turn on Sam  bullying him which kind of comes  out of nowhere. One of the Scout leaders goes  from just being unfair to Sam to being an  utter dickhead. Again, these issues come  into play AFTER Sam has already made some of his more dangerous choices. I think, if the sequence of actions had been reversed, Cub would have made more logical sense especially in how  Sam does  some of the things he does later  in the third act.

Now for this  big WHAT IF  that may  likely change the film’s entire dynamic.

Delving into a psychological aspect of Cub, it could be argued that the feral kid and Sam are one and the same. Unless I am mistaken, there is no point that anyone ever sees the two together at the same time in the film except Sam himself, though there are scenes where both are viewing other members of the group together. So, it is very possible that Sam’s is from this area and his dark past is linked to the woods and its history. If so, the film make much more sense as you have a scene that essentially shows where Sam’s humanity gets murdered.

So, depending on how you interpret the film might also determine how much you enjoy Cub. If you take it all in the literal sense, the film is going to come off a little illogical. If you take it as a story where  a boy finally succumbs to his dark past, then Cub  will make perfect sense.

Either way,  Cub  is a good watch with a nice setup and an interesting setting…and some malicious booby traps. If you get a opportunity, give Cub a view. I can recommend it whether you are a literal or metaphorical styled thinker.

[Review] Bedeviled (2017): Misses the Opportunity to Enjoy Its Own Campiness – by Vanessa

Modern horror likes to chase current fears and with Bedeviled (2017) that remains the case. In this feature from the writing-directing team of Abel Vang and Burlee Vang, the fear is the app on your mobile device, the little bit of software gleefully downloaded into your private world and space. Yes, it’s a horror film […]

Four years ago, Train to Busan was voted the most popular FrightFest Closing Night film ever. This year, the hotly anticipated stand-alone sequel Train to Busan Presents: Peninsula will open this year’s Arrow Video FrightFest October event, courtesy of STUDIOCANAL. The film is scheduled to play on Thursday, October 22 at 6:00 p.m. across three screens […]

Exclusive Clip – ‘War Of The Worlds’ – ‘Bill And Helen’

As you should already be aware – Doc Rotton and I have been lucky enough to be able to get early looks at the episodes of War Of The Worlds – a new weekly series airing on the EPIX channel and app. The show is coming at us in eight roughly hour-long episodes and is […]