One of the best tag lines in horror history – “Take the stairs, take the stairs, for God’s sake – TAKE THE STAIRS!” Will never forget the first time I noticed the VHS copy of The Lift sitting on store shelves and to be honest – I don’t think I’ve seen it since then.   No better way to revisit it thought then with a kick ass Blu-ray release from Blue Underground!

Turns out that The Lift has an American remake that I didn’t even know about – titled Down – it’s hitting Blu-ray as well.   Got all the details for you so – let’s get into it. 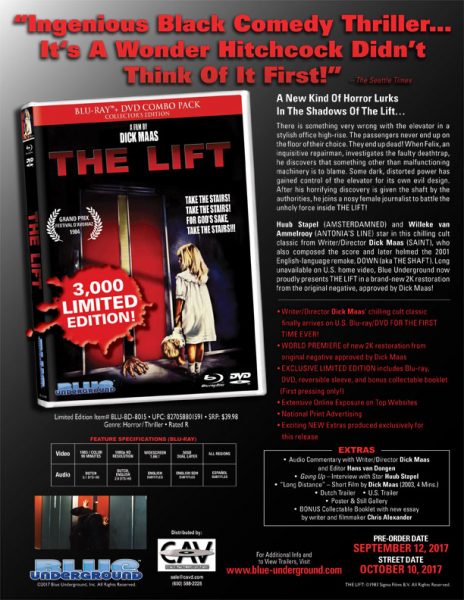 There is something very wrong with the elevator in a stylish office high-rise. The passengers never end up on the floor of their choice. They end up dead! When Felix, an inquisitive repairman, investigates the faulty deathtrap, he discovers that something other than malfunctioning machinery is to blame. Some dark, distorted power has gained control of the elevator for its own evil design. After his horrifying discovery is given the shaft by the authorities, he joins a nosy female journalist to battle the unholy force inside THE LIFT!

As I mentioned – an American remake exists – behold the details for Down. 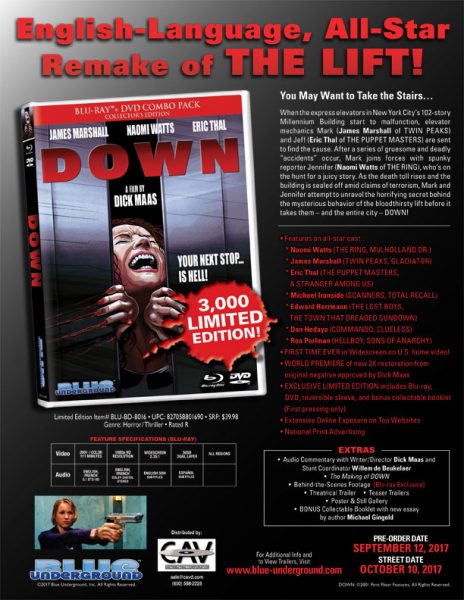 You May Want to Take the Stairs…

When the express elevators in New York City’s 102-story Millennium Building start to malfunction, elevator mechanics Mark (James Marshall of TWIN PEAKS) and Jeff (Eric Thal of THE PUPPET MASTERS) are sent to find the cause. After a series of gruesome and deadly accidents occur, Mark joins forces with spunky reporter Jennifer (Naomi Watts of THE RING), who’s on the hunt for a juicy story. As the death toll rises and the building is sealed off amid claims of terrorism, Mark and Jennifer attempt to unravel the horrifying secret behind the mysterious behavior of the bloodthirsty lift before it takes them – and the entire city – DOWN!

Michael Ironside (SCANNERS), Edward Herrmann (THE LOST BOYS), Dan Hedaya (COMMANDO), and Ron Perlman (HELLBOY) co-star in this big-budget remake of THE LIFT helmed by original Writer/Director Dick Maas
(AMSTERDAMNED). Previously released on home video in a cropped full-frame transfer as THE SHAFT, Blue Underground is now proud to present DOWN in a brand-new widescreen 2K restoration from the original negative, approved by Dick Maas!

Both must own discs hit on Oct. 10th so circle the date and get ready for the ride of your life.

RIP Haruo Nakajima – The Man Who Was Godzilla Has Passed

Renowned genre-focused film festival Fantastic Fest has announced its spectacular lineup of films and in-person events — and for those unable to attend in person in Austin, Texas, take heart, […]

The Brooklyn Horror Film Festival has consistently presented jaw-dropping line-ups of fright fare, and was recently named to Moviemaker Magazine’s 30 Bloody Best Genre Fests in the World. This year […]