Preacher  decides to throw us for a loop this week with the start of  Sokosha. We start out with a couple of people we haven’t seen before. More specifically, a broke couple (Samantha Beaulieu  and  Damien Moses) being treated by a mysterious man only known as The Technician (James Kyson), who promises them money during hard times in exchange for something. That something? A glittery white substance he turns into a pill for the fading Mildred (Becki Davis) to the delight of her husband (Sewell Whitney). This is definitely a turn out of left field or  Preacher, showing us a side of the mysterious organization we’ve been following that had yet to be introduced.  Sokosha  is a key example of how the show delicately reveals the corners of this universe. Allowing the audience to watch it unravel most of the time, rather than exposit. Though there’s a bit of that later. 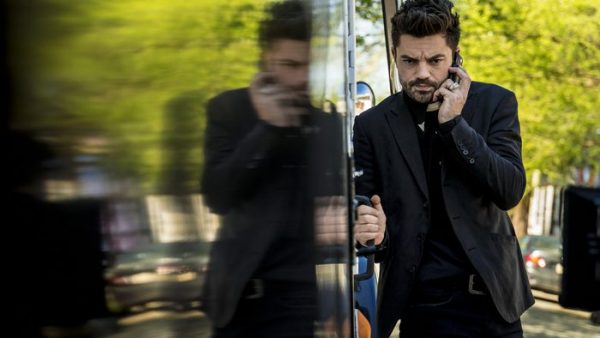 Meanwhile, Jesse (Dominic Cooper) has just taken a relaxing shower. As he delightfully brushes his death, Cassidy (Joseph Gilgun) is trying to help out his mate Denis (Ronald Guttman) as Tulip (Ruth Negga) makes breakfast.  Preacher  shows the characters in perfect contrasting outward moods that feel counter to their inner turmoils. It’s obvious that each member of our trio is hiding something. Tulip cooking pancakes with marshmallows to work past her worries over what Jesse nearly did. Jesse brushing off his horrid behavior with further talk of finding God. Even Cassidy hiding his inner feelings for Tulip under his love of trash TV and conspiracy theories. There’s a false air of normalcy that barely hides the tension and pain. Something of a recurring theme in  Sokosha. 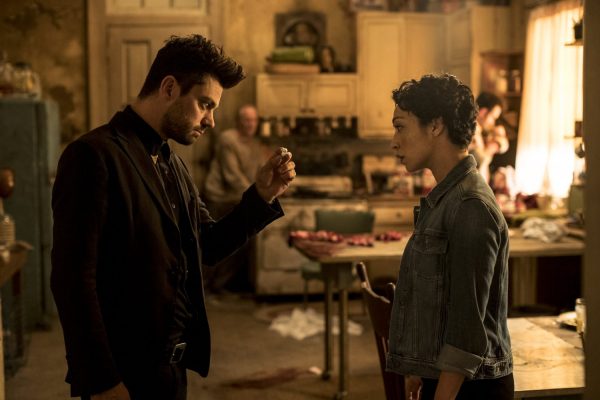 Of course, that tension only raises further as The Saint of Killers (Graham McTavish) arrives at the apartment complex. Alison (Stella Allen) leads him there after their cliffhanger last episode, but The Saint has to figure out which apartment our trio is in.  Sokosha  is the first episode to truly show off the thought process behind our cowboy. The mindless determination in every move of his is spine tingling and darkly funny. Especially as our trio realizes he’s there and try to find some way of escaping his grasp. They decide to even do a bit of old fashioned research about him at the library. Unfortunately, this is all done in rather underwhelming exposition. Considering it’s just repeating all the past we already knew about The Saint from last season. It’s nice to see a few bits of the late great Steve Dillon’s artwork. Yet,  Preacher  still just seems to be spinning its wheels before we get… 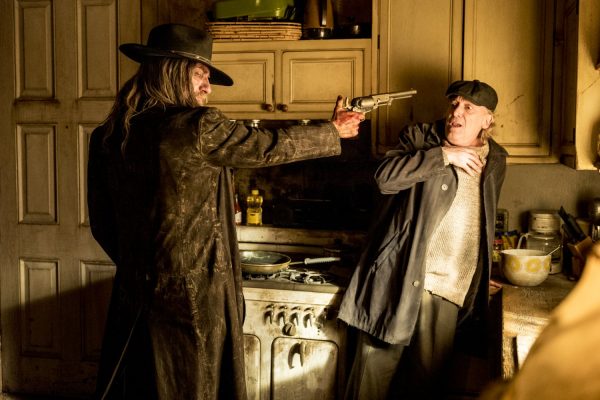 The confrontation. The Saint of Killers has Denis hostage at the apartment, leading our  Preacher  to take him on directly. Not a shot is fired between the two, but more words than would be expected are spouted. Jesse reveals God’s absence and sends The Saint into a rare moment of confusion wrapped in a familiar anger. It’s nice to see Cooper and McTavish actually have a scene of true confrontation. One where they seem like two men instead of two supernatural beings. All while still keeping the dark edge both have built over the course of the series.  Sokosha  shows off that The Saint, despite being the most unapologetically murderous person on the show, is the most straightforward and honest as a result of his bluntness. 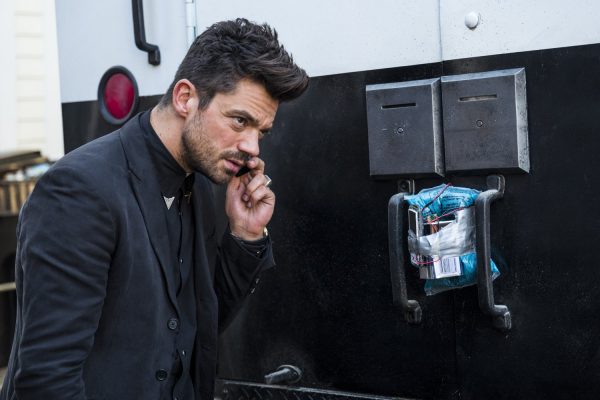 Eventually, the two come to an agreement. If The Saint of Killers will leave our leads alone, Jesse will get him a soul so The Saint can get into Heaven. As The Saint keeps the others as collateral, Jesse tries buying a soul from a local voodoo shop. Unfortunately, current shopkeep Papa BeBe Jr. (Renell Gibbs) has been run out of the soul collecting business, as the Japanese have taken over. It’s a funny way of showing that even the supernatural parts of  Preacher  are susceptible to the whims of the marketplace. Jesse tries a rather elaborate display of bomb prep to get inside an armored vehicle, all while the tension between The Saint, Tulip, Cassidy and Denis rises. During all of this, Denis is revealed to be Cassidy’s son, aged past his father and in a sickly state. It’s a notable moment of vulnerability, one that gets Tulip to attempt action. Even if failed, it lightly reassembles the bridge between Tulip and Cassidy that’s been crumbling for so long. 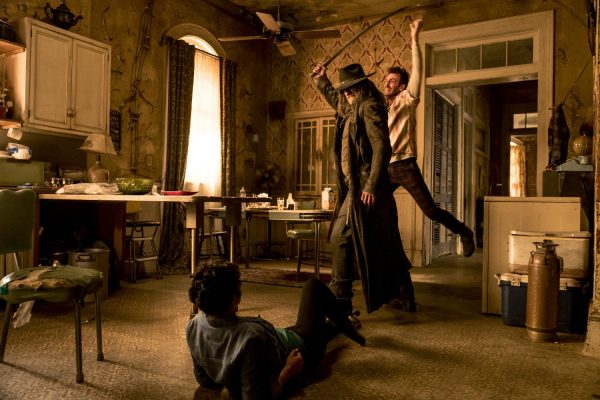 Running low on time and matching souls for The Saint, The Technician reveals to Jesse that there’s only one soul in New Orleans with a blood type-style match for The Saint: Jesse. After a confrontation that sends Cassidy scrambling for his fingers, Jesse gives The Saint a pill with a small portion of his own soul in it. This allows The Saint to be susceptible to Genesis. However, Jesse uses this opportunity to lay into his old  Preacher  boots and dig deep into The Saint’s self righteousness. It’s a wonderful moment of the shoe being on the other foot. Seeing the formerly indestructible Saint of Killers quiver on his knees as Jesse forces him to disarm and listen as the target becomes the shooter. It’s a return to the Jesse that made season 1 turn on a dime. One corrupted by his power and impulsive in his action. 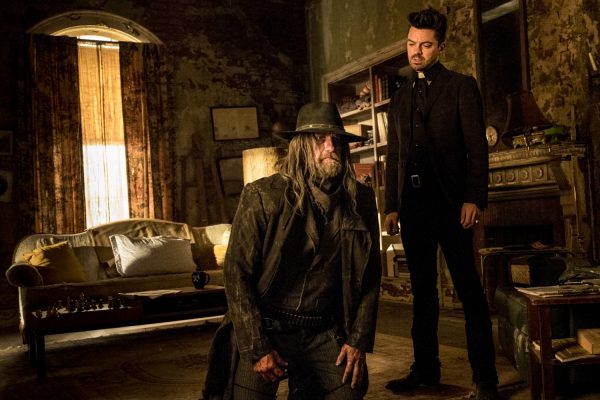 Such action leads Jesse to take The Saint on a joyride. Trapping him in the armored truck from before, Jesse drives the thing into a Louisiana swamp. It’s a moment of power for Jesse, but one that Dominic Cooper’s facial performance brings to mind – along with the likelihood of The Saint reappearing – that this is fleeting.  Sokosha  is a wonderful episode of  Preacher  mainly because of the vulnerability it gives the characters. There’s a lot of stakes and passion going into this one. Dealing with a literal and metaphoric search for souls. Despite being a show with plenty off color jokes and violent horror,  Preacher  does truly care about showing the vulnerability of its characters. Even as it strays away from Garth Ennis’ text, the major themes of false masculinity and self serving patriotism riggle through. Jesse’s veneer is matched by his friends. The only thing keeping him from that same state is a power he can barely grasp. It’s nice for things to get introspective in the middle of joke about lizard people.

Welcome to  American Gods Fan Podcast,  Episode  5 “Lemon Scented You”. This is the unofficial podcast about the hit Starz television program  American Gods  by fans for fans as brought […]

This review contains spoilers. Alright, Grue-believers, what comes after Thanksgiving? Delicious sandwiches made from leftovers? Well, yes, but what I am referring to here is the knockdown, drag em out […]

Scream Queens, what can I say, I hated it and now I kind of love it. It is quirky, goofy, over the top, offensive and hilarious – if you are […]