Karate Kill is awesome and bat-shit crazy! Writer/Director Kurando Mitsutake goes straight for the throat and does not let up for a single moment in this clear homage to the cinema sleaze of times long since passed. Blood and bullets along with kicks and tits fill almost every second of the very brisk 80 minute run time and we, as the viewer, are encouraged to go along for this wack job ride on the celluloid roller coaster that is Karate Kill. 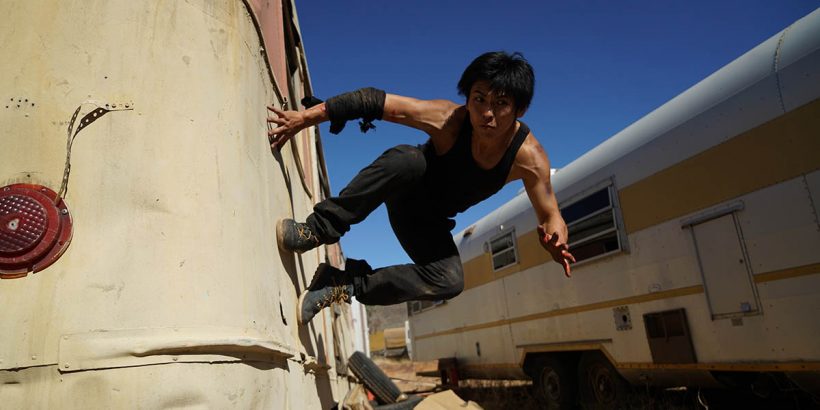 The plot found here is a fairly simple if not stereotypical one involving familial bonds and promises. Promises that our hero “Kenshi”, played by newcomer and all around badass of the year, Hayate, intends to keep. The gist is that Kenshi has been sending his wannabe actress sister “Mayumi”, the always nude Mana Sakura, who moved to L.A. with big dreams, every dime he can so she can come back to Japan where he can protect and watch over her. Unfortunately for everyone in L.A., Kenshi decides to pay his sister a visit after her correspondence seems to have suddenly stopped. Upon arriving at her former address and finding a near nude Japanese man um, orally servicing the back nine of a chubby and topless nun, he beats him into telling him what happened to the former resident, his sister. Turns out she’s been working for a hush-hush gentleman’s club and has since been kidnapped by a maniacal cult leader and taken to Texas where the cult produces snuff and rape films for the dark interwebz. What ensues over the second half of this film can only be described as “sheer ass-kickery”. Hicks, boobs, shotguns, hook handed and eye patch rocking women, a samurai swordsmen, and bullet-dodging is just the tip of the bloody iceberg. 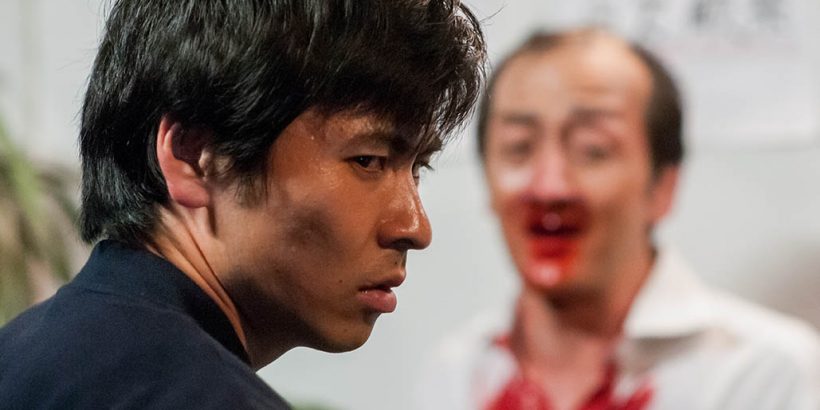 This movie. This freaking movie is quite easily the best movie I’ve been tasked with reviewing since throwing my lot in with the fines folks here at Gruesome Magazine, which btw, there is now an ACTUAL magazine that you can buy, how rad is that?! Anywho, I digress. Karate Kill has so much going for it that it makes the faults it does have, CGI muzzle flashes and gunshot wounds along with a few odd cinematography choices, well, it makes them not even really matter. The acting, while not all stellar, is competent across the board and the fight choreography is better than of the mainstream fare we’ve been provided as of late, COUGH IRON FIST COUGH. There aren’t many breaks in the action and the ones that do surface usually offer something else to look at. Set design, costuming, music, all quite impressive for a movie with a budget of its size. There is a comedic relief bit involving the owner of the club, Noriaki Kamata, and his hair or lack thereof, but it goes by so fast that it never felt distracting or took me out of the film. 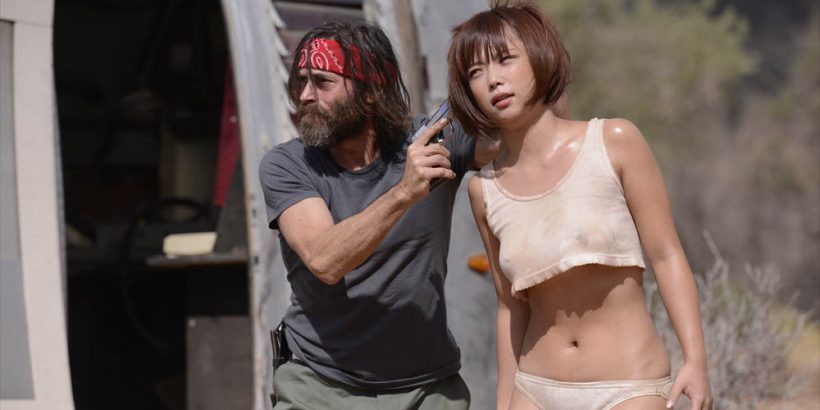 The cult segment and arc of this movie really got me thinking though, I will admit that. I never in a million years thought that a film with this sort of title would indeed have a poignant and relevant message peppered in with the rest of the shenanigans. As I’m watching anonymous people shell out big bucks to watch the snuff films and acts of barbarity in the safety of the computer chair I felt a moment of dread. Dread because it is COMPLETELY in the realm of possibility and believability that such a venture could not only actually occur but that it would more than likely be an incredibly lucrative one. What we are able to find on the internet is amazing. Truly an unmeasurable wealth of knowledge and information at all of our fingertips and yet I, like most of the populace, use it to bitch about movies and ogle nudie photos. So is it really hard to believe that if we all dared to go deep enough and dark enough that we could find and possibly pay for such material? Terrifying. Enough of the depressing stuff, let’s get back to the meat. 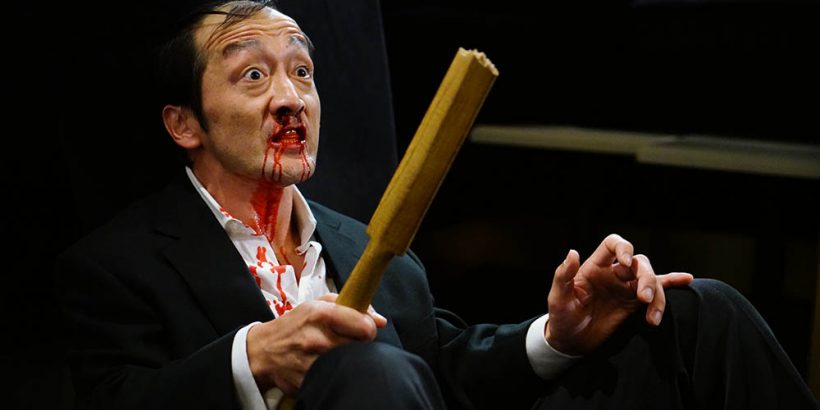 For me though, the real star of the show here was Japanese cult cinema star Asami. Here she plays “Keiko”, a hook-handed shotgun master who was an escapee of the aforementioned cult that lives, sleeps, and screws for revenge. Her and our hero quickly find each other upon his arrival to Texas and from there a mutual lust for revenge and violence blossoms into actual lust. She owned this film. Her wide-eyed gazes of longing towards our main man quickly turn into sharp eyed black pits of violence at a moment’s notice. This character reminds me so much of the ass kicking heroines of old ala Foxy Brown or One-Eye that I couldn’t help but fall in love. My only wish is that her character was given a better wrap-up, but, it really isn’t her story that needs tellin’, so it can easily be forgiven. 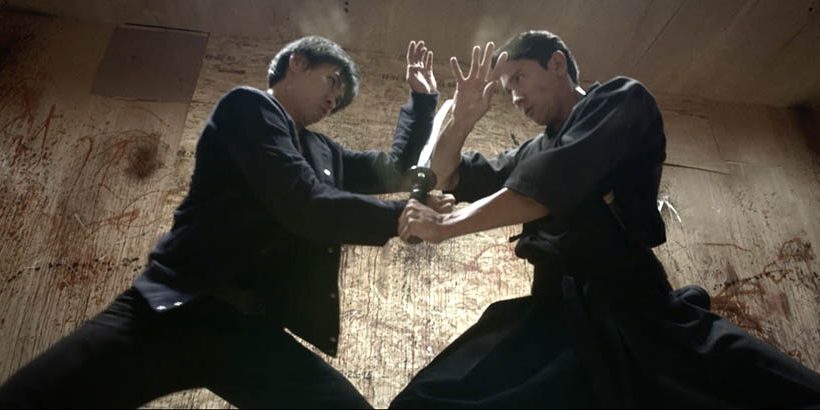 Newcomer Hayate, which by the way, anyone that gets by in life with only one name is a bonafide G, handles the material quite well for a martial artist turned actor given his classmates throughout the years. Kicks and punches are all delivered with a strong sharpness that really displays the impact being administered. Limbs are snapped like twigs or all and out removed with a purely intended ferocity that made me cheer aloud several times. One particular fun scene involving the head of the cult, Kirk Geiger, and his punched to death demise had me doubled over with glee and amazed by just how this movie kept getting nuttier and nuttier as it went on. Truly, I can’t recommend this enough. I thought going in that I was getting a Japanese version of Black Dynamite, but instead of a send-up I got a loving and carefully crafted homage.

This movie won’t be for everyone. It isn’t horror. Yes, there is gore and violence and the like, but there is no horror here. What is here is a martial arts fueled thrill ride. If nudity and subtitles ain’t your bag, then baby, look elsewhere. However, if any of the things I’ve mentioned in this brief declaration of love are in fact, your bag, then you have GOT to see this movie. It was a surprise, a surprise of the best kind. 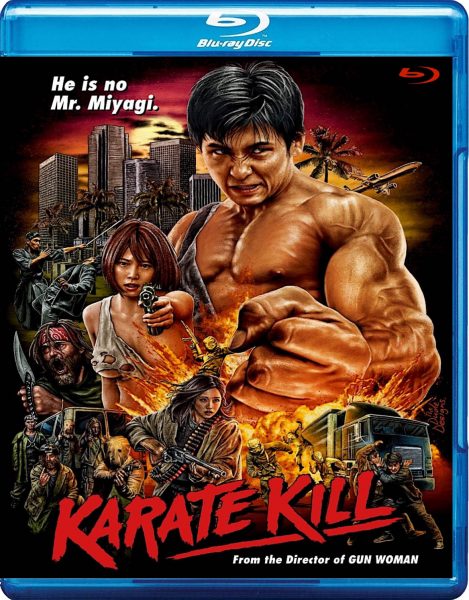 On episode 497 of Horror News Radio: The Grue-Crew review… JURASSIC WORLD: DOMINION (2022). Warning: possible spoilers after the initial impressions! Be sure to subscribe to the Gruesome Magazine YouTube […]

Auteur Isaac Ezban gained a well-deserved great deal of notice this year for his twisted Twilight Zone-ish film The Similars (reviewed here), and I predict that he will receive even […]

“Love, Work and Other Demons” (2016): Female Fighter Waits Tables and Wards Off Devils