After returning to the  Alien  franchise with 2012’s  Prometheus, director Ridley Scott has  even more baggage. Not only the weight of his successful start & James Cameron’s initial sequel, but the massive disappointment of the entries  that followed and divisive reception of his own return. With  Alien Covenant, the question on everyone’s mind  is would he progress the larger thematics of religion and man’s hubris he established in 2012 or would he cave to pressure of fans and make a Xenomorph ladened gorefest more in the vein of  Aliens? The answer is… he kinda did both? Clearly,  Alien Covenant  desired to be a bit more of a traditional entry in the  Alien  franchise, featuring much more gore and Xenomorph related action. Yet, Scott manage to sneak a fair share of his heady ideas into the mix, resulting in something a bit more palatable. But… does any of that make  Alien Covenant  good? 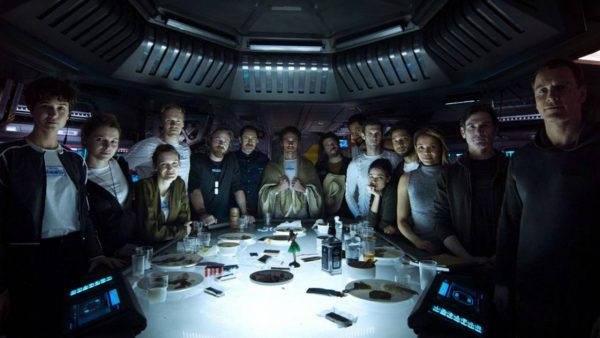 The crew of the Covenant – a colonization ship filled with a crew of ten, 2000 frozen colonists and several embryos – have hit some unexpected turbulence. This results in a few frozen colonists dying and the malfunctioning of Captain Jacob Branson’s (James Franco) cryopod. Terraforming expert and  wife of the late captain  Daniels Branson (Katherine Waterston) is at odds with new acting captain Christopher Oram (Billy Crudup). He wants to follow a signal found in Tennessee’s (Danny McBride) helmet that leads them to a nearby unknown planet, which she feels is unsafe. The crew decides to explore, finding  an environment that’s incredibly Earth-like and potentially better as a colonization spot than their original destination. However, as they continue to explore this paradise, a few crew members start to get infected, leading to coughing, bleeding and more than a few… bursts, shall we say?

Alien Covenant  aims for middlebrow sci-fi horror and sort of crosses the finish line. Not a high goal, but  skirts across that goal better than  Prometheus. That film set the lofty goals of being far more of a meditation on creation and meaning only to suddenly turn into a rather half ass horror movie with characters directly breaking every rule that’s been established.  Alien Covenant  has more familiar goals. There’s a consistent building of curiosity that transitions to dread and thrashing gore with a point. It’s not as smooth a transition as Scott originally made  in 1979, but the genre thrills are decently consistent in  Alien Covenant. We see these people struggle with the endless horror of being destroyed by these unflinching alien creatures, giving a bleak nihilistic misery to the proceedings. Thus, when headier subject matters are covered when  the two android characters of Walter and David (both played by Michael Fassbender) meet, we have far more build up to the themes of reasoning – or perhaps lack-thereof – behind man’s creation over the meandering of  Prometheus. 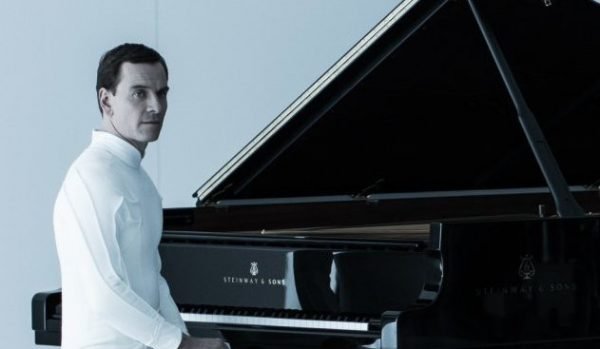 A lot of this rests on the shoulders of Fassbender’s dual roles and he once again knocks it out of the park. Much as he did in Prometheus, he steals Alien Covenant without raising much of a finger.  Whenever the story dips into some familiar territory of twists and turns or the action sequences feel rather awkwardly edited together, Fassbender keeps things far more lively. His contrasting portrayals of David and Walter go far beyond different voices. The way he carries himself denotes contrasting confidence and roles for either android. Walter is much more upright and attentive, while David is far more calculated and poised. There’s a precision  to both that connects them as similar models with totally different experiences, but an even amount of quiet curiosity that binds them. Some of that curiosity spills over into a palpable tension that’s purposefully awkward and disturbing, but in a way that services the pays off the themes of  Prometheus  far better.

Yet, Alien Covenant  suffers from lingering problems of Prometheus‘ surface level approach to characters and religion, mainly with folks like  Oram. Oram’s religious inclinations  are blatantly exposited  to us. “People don’t trust me because I’m a man of faith,” Oram mentions at several points. Yet,  it never really enters into why the crew distrusts him. If anything, the crew lacks confidence in him because he… throws the crew into moronic situations without much thought! I know, how silly of them! If this was intended as some kind of satiric jab at modern perception of religious persecution, much of it ends up screaming as hollow. Oram isn’t the only one immune to stupid decision making.  Alien Covenant  features many side characters with idiotic tendencies, whether it be going onto a planet without any helmet at all and trusting some suspicious characters. 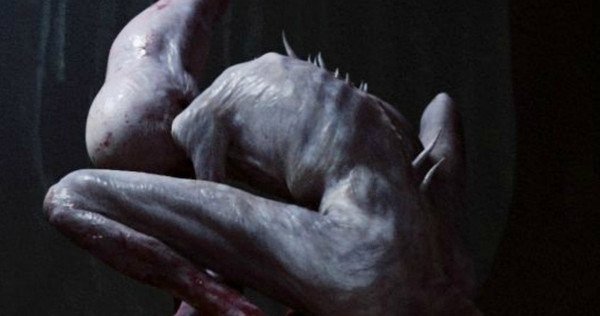 Tennessee risks the lives of thousands of colonists by floating the ship a mere 80 km over a stormy atmosphere. Karine Oram (Carmen Ejogo) hugs a person who’s clearly suffering from nightmarish body horror. Multiple people willingly breathe in spores released from weird plants on the ground. All of these human characters are either idiots or underwhelming vessels for alien carnage. Their lack of definition or memorability is the biggest failure of  Alien Covenant, despite the best efforts of some of the actors involved. In between all of the horror of all the Xenomorphs,  Alien,  Aliens  and even  Alien 3  had memorable engaging characters one could get behind.  Alien Covenant  attempts to have occasional character moments,  but they’re fleeting in favor of the gore and horror that befalls them. Ridley Scott is far more interested in the way everything looks. His methodic direction and  Dariusz Wolski  gorgeous yet  closer to the lived-in feel of the original film Scott directed than  Prometheus. Including the crimson gore. 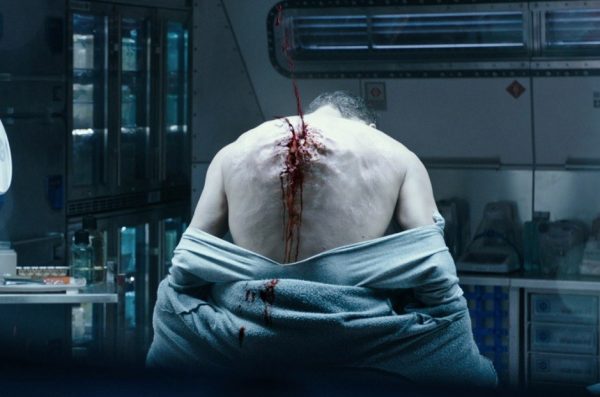 Now, that’s not necessarily a complete fault. Unlike  Prometheus  where the  deaths mostly consisted of throwing people across a room, the deaths in  Alien Covenant  are refreshingly visceral. The various forms of execution are a mixture of practical and CG effects, ranging in quality from serviceable to shocking. There’s literally a point where someone slips on the gore all over the floor. It’s more of a return to the original Xenomorph gore we’re used to, but with a few more creative twists and turns. Then again, the CG used to recreate the Xenomorphs are pretty inconsistent. The initial Proto-morph is a more chaotic and squishy turn on what we know the titular extraterrestrials to be. One that gives off an unique vulnerability that feeds into the thematics at play. Then, there’s the traditional Xenomorph… who sticks out like a sore thumb and makes the big action climax feel kind of flimsy. 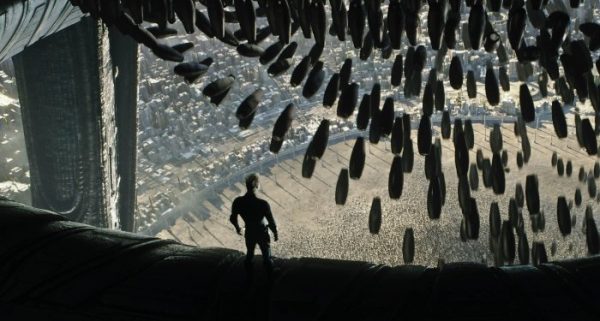 So with all those factors in mind,  Alien Covenant  squeaks out to be the best film in the  Alien  franchise in a long time. Yet… that’s not a high bar to cross. After two decades of everything from Alien Resurrection  to  Prometheus, one doesn’t have to do much to be considered interesting.  With the gorgeous cinematography, bloody entrails and solid themes of creation,  Alien Covenant  feels like a more consistent vision than most of the previous  Alien  films. Unfortunately, that doesn’t make it a good film. For every gorgeous visual or gory moment, there’s some stupid character action or wonky CG Xenomorph moment to crush a bit of the momentum. While being a step up from  Prometheus, it seems to be further evidence that Ridley Scott and 20th Century Fox may be better off just hanging up the phallic penis heads. Let’s just hope Shane Black’s  Predator  shakes up to be better next year.

There is always a temptation to prepare for a movie sequel, or in the case of It Chapter Two a continuation, to watch the last film in the franchise and […]

“Never Open the Door” (2014): Why is Good Advice Never Taken in Horror Movies

At a somewhat secluded cabin in the woods, six friends all sit down to dinner. Two couples, Luke (Mike Wood, Bloody Bloody Bible Camp) and Maria (Deborah Venegas, The Haunting […]

“White Coffin” (Fantasia 2016): A Mother’s Desperation Turns to Horror in this Argentine Gem

In the States, few horror fans have heard the name Daniel de la Vega (Necrophobia). Thanks to the Fantasia International Film Festival in Montreal, horror fans venturing across the Northern […]