Way back in 1975, Roger Corman produced a film that has become more and more prescient as the years moved forward. Called Death Race 2000 (Directed by Paul Bartel), it told the story of a race between a group of over the top, garish characters that drove modified cars across the country. Their goal was to score more points than the other contestants. The only way to score points was to run down as many pedestrians as possible. Starring David Carradine and a very young (& funny) Sylvester Stallone, Death Race 2000 became an instant cult classic. It even inspired a video game (Banned soon after its release), in which the player had to drive around and mow innocent people down with his/her car. It took awhile, but in 2008, Jason Statham starred in the big budget remake, and its success led to two sequels (Which both starred Luke Goss). There’s even a 3rd sequel (Death Race: Anarchy) currently in post-production for release next year. Corman sold the title to Universal for a tidy sum, and he’s been sitting idly by while they do whatever it is they’ve been doing with it. But he finally decided to revisit the title as only Roger Corman could revisit one of his films, and the result is called Death Race 2050. Sadly, it has trouble getting up to speed and spends most of its running time spinning its wheels. 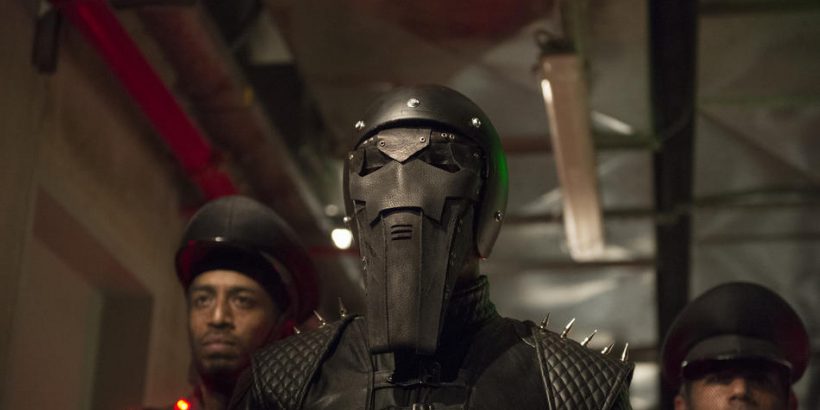 In the year 2050, planet earth is grossly overpopulated. The government’s solution is to hold an annual Death Race, in which a motley crew of drivers (& their navigators), drive across the country – mowing down as many innocent pedestrians they can. The government (Known as The United Corporations Of America) is run by The Chairman (Malcolm McDowell), and the populace of the country is largely unemployed. They’re all held in sway by VR glasses they wear to experience the race up close and personally. Everyone is watching the latest race because basically, that’s all they have to look forward to in their mundane, going nowhere lives. 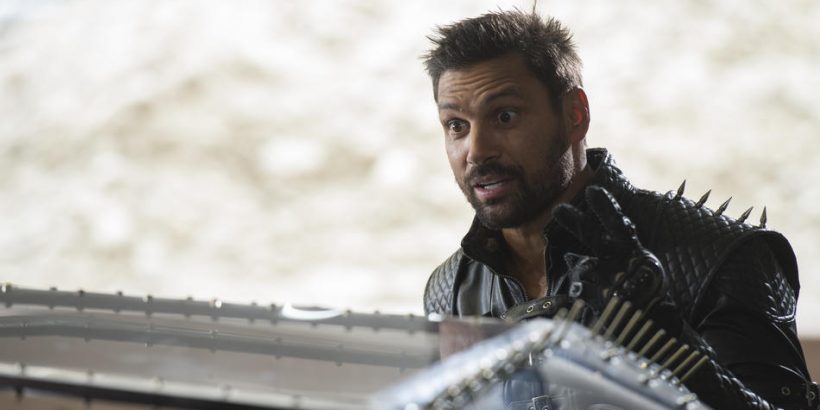 As in the original, the drivers in the race are an assortment of flamboyant characters. Minerva (Folake Olowofoyeku) is an African-American rapper with a hit song (“Drive Drive Kill Kill”) that she raps over a microphone as she’s driving in order to bring out her adoring fanbase – and then score big points by running them over. Jed Perfectus (Burt Grinstead) is a prissy, narcissistic, genetically engineered adonis with a big chip on his shoulder. Tammy (Anessa Ramsey) is the leader of a cult that hangs on her every word, and Abe (Voice by D.C. Douglas) is a self-driving car that isn’t as intelligent as he thinks he is. But the star of the race is the one & only Frankenstein (Manu Bennett), who has won the race previously  and garners tons of fan interest because of the mask he never takes off. As the race begins, it’s immediately evident that Frankenstein has his work cut out for him as the other drivers seem to care more about eliminating him from the race than actually winning it themselves. Adding to his woes, Frankenstein has no use for his latest navigator, Annie (Marci Miller). 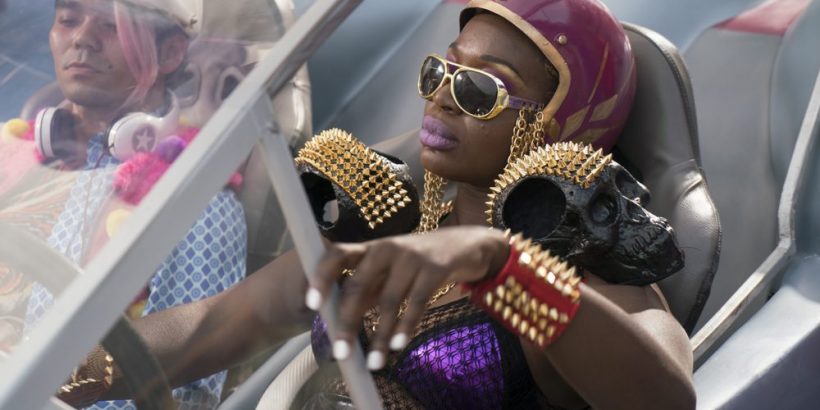 Since this is a straight-up remake of the original film, and not connected to 2008’s version, the plot is very familiar. But screenwriters G.J. Echternkamp and Matt Yamashita try to give it some relevance to things happening in our world today. The VR bit is an obvious comment on how we’re all attached to our video screens, whether at home or on our phones/tablets. The chairman himself seems fairly close to the portrayal of the character in the original, but he obviously has some traits in common with a certain politician who’s been everywhere as of late. The film also has a pair of live commentators, JB (Charlie Farrell) and Grace Tickle (Shanna Olson) who are just as over the top & annoying as the commentators of the original film were. The film has its heart in the right place, and for the most part, does an OK job of replicating the look and feel of Corman’s original production. But “OK” isn’t what I was expecting from this film. 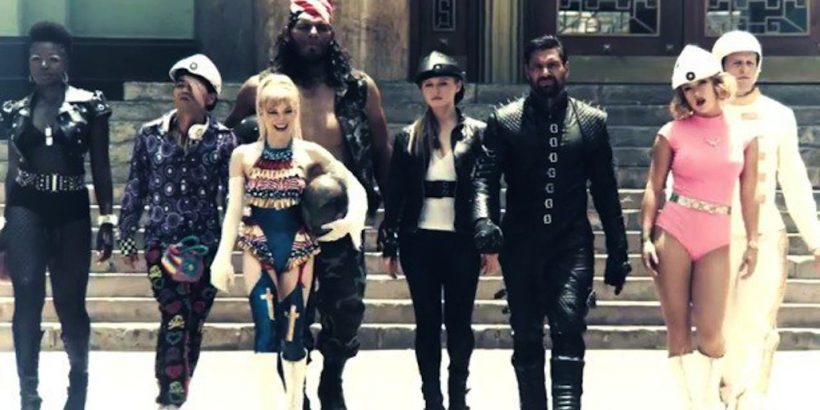 What the film doesn’t have is much of a budget. I daresay the budget for this might actually be lower than it was for the original 1975 production. Death Race 2050 is chock a block full of lousy green screen work, and some really cheap looking cars doing all of the racing. The cars look more like golf carts with some pseudo-futuristic car frames built over them. None of the racing scenes give the sensation of speed at all, this might be the slowest Death Race you’ll ever see. The “Crowds” of people filling the stands look like they add up to about 40 people who keep changing their outfits  and switching seats to give the illusion that there are thousands of people in the arena (It doesn’t work). 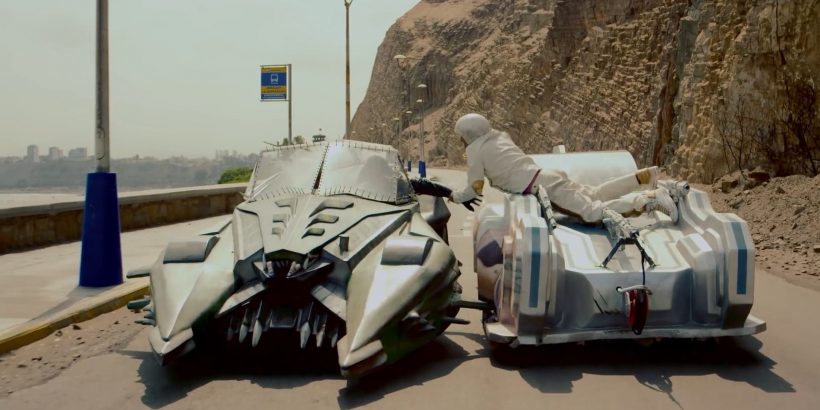 Director Echternkamp tries really hard, though. The script has a few details added to a some of the characters that give them a bit more depth than expected in a film like this. He elicits some decent performances from most of his cast. Although they all have to play their roles a bit over the top, he manages to rein them in when necessary for the most part. It’s star Manu Bennett who gives the worst performance in the film. His Frankenstein is staid and one note, there’s little to no intonation in his voice, so when he’s trying to display some modicum of emotion it simply doesn’t register because his tone never changes (nor does his facial expression). Making matters worse, he takes off his freaking mask almost as soon as he gets in his car – BIG MISTAKE. There’s absolutely no mystery to Frankenstein here, he’s just another burly pretty boy with strategically trimmed 3-day beard growth. 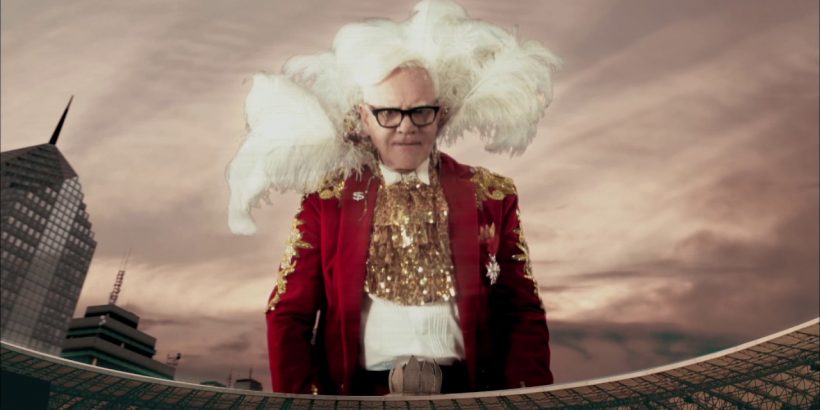 And while I didn’t much care for this iteration of Death Race, I did enjoy the opening 20 minutes or so. It’s here that the film feels most like the original, with the driver introductions and scenes of the Chairman overseeing everything (By the way, is there anything that McDowell won’t appear in nowadays?). But despite its attempts to modernize the story by bringing in aspects of today’s world to it, the film becomes a chore to sit through pretty quickly. I was actually repeatedly pausing it to see how much time was left to go because it was becoming an interminable bore. I suppose trying to remake the original film would be a heady task for any film-maker, which would explain why the Universal remakes with Statham & Goss go off on completely different tangents from the original. But trying to do it with what appears to be even less money than they had in 1975 is pure folly, and even Corman should be ashamed of how poorly this film turned out. I expected a lot better from this one, all it did was drive me to the brink of a long nap.

Director Takashi Miike is known for his often bizarre and violent films, but, as with George A. Romero’s zombies, the more exploitive aspects of Miike’s movies are generally in service to a broader social commentary. In Dead or Alive (1999), Miike throws his audience headfirst into the Tokyo underworld, where a gangster is waging a […]

“The Haunting of Alice D” (2016) : A satisfying mashup of an old-school haunted house with modern low-budget horror

In The Haunting of Alice D, the modern descendant of a 19th century brothel owner celebrates the renovation of the building by throwing a wild party, complete with prostitutes and drugs. This does not sit well with the ghost of Alice D, a young woman previously sold into sex slavery and whose life ended tragically […]