I was talking to a friend of mine a few weeks ago, and the topic was slasher films. We were lamenting the fact that we couldn’t think of any new ideas to bring to the slasher film. Think about it, all of the major holidays have been snapped up for a slasher flick already (most of the minor holidays as well). And even without a major holiday to build a slasher around, just about every possible situation you can fathom to base a slasher film on has already been done by now. What idea could an enterprising young screenwriter think up to bring something new to the genre? What director could take that idea, and mold it into something fresh and different for a memorable slasher film? So imagine my surprise when the very first horror film I watched in 2017 just happened to be a slasher flick! It’s called Pitchfork, and as I popped it on I wondered if it was the answer to the questions I just asked. Have writers Glenn Douglas Packard and Darryl F. Gariglio come up with that new idea, that new situation, that will make Pitchfork that new direction that the slasher genre needs? 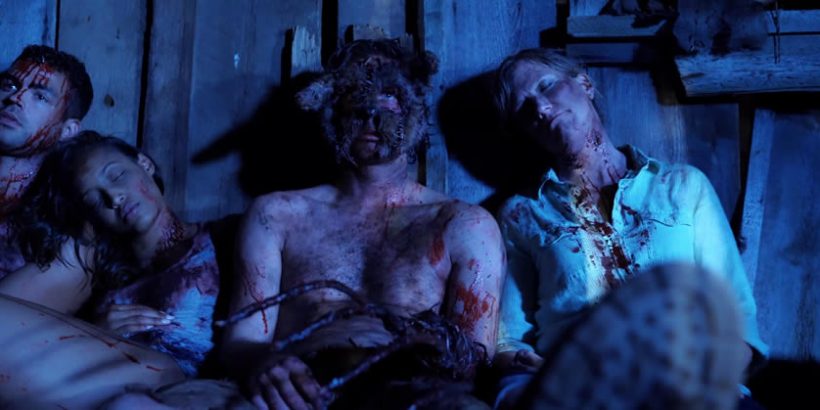 Stop me if you’ve heard this before. Hunter (Brian Raetz) and a group of his obnoxious college friends are driving towards his family farm to have themselves a big ole hootenanny in the barn. Hunter also plans to officially come out as gay to his parents. The group is driving a ridiculously over decorated van, and Hunter’s friends pretty much fill in for every possible stereotype you can imagine in a film like this one. So there’s a jock, a nerd, a sexpot, a loving couple, a partridge in a pear tree, etc, etc. All of them are to support Hunter as he builds up the nerve to come out to his parents, but after a few minutes all they seem to care about is the big party (and sex. Can’t forget about sex.). One of them is so bold as to declare her intention on bedding an unsuspecting Amish lad, seeming to forget that she’s there to support her friend, Hunter. 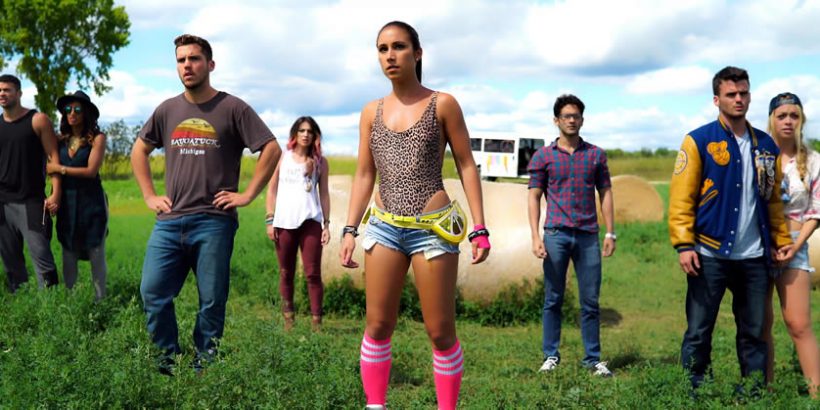 Of course, there’s a killer on the loose as well. Called “Pitchfork” because his right hand has been removed and replaced with a bloody pitchfork (which, in a nifty touch, is attached with barbed wire). He wears a mask made of animal fur, and doesn’t speak (he grunts). Where he came from isn’t explained, nor is there a reason given as to why he has it in for our frolicking college kids. Then again, they are on an isolated farm in the middle of nowhere, and they are copulating all over the place. Take away the farm, and replace it with a Summer Camp and you have the basic plot of nearly every Friday the 13th flick. 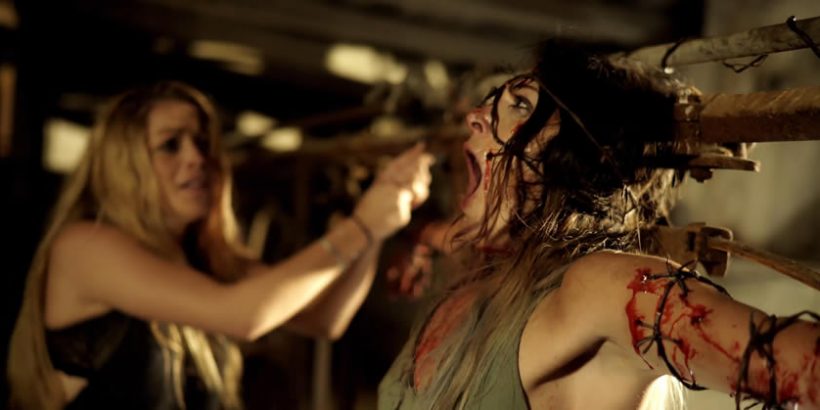 Director Glenn Douglas Packard apparently has a background in dance, so the film comes to a dead stop in order to showcase the big barn dance. The girls took the time to rehearse their big dance scene, and they have their routines down pat. It certainly does nothing for the movie, but if you’re the type of person who laments the lack of big dance scenes in slasher films – then this film has got you covered. Sadly his expertise in dance doesn’t really translate all too well when it comes to directing a slasher as Pitchfork is one of the laziest slasher films I’ve ever seen. It was shot in HD, so it at least looks pretty good, but there’s little to no flair in any of the scenes here. It feels like Packard just set up a camera and turned it on, with no care as to how the shots are framed or what’s going on within the shot itself. There’s also a fair amount of reliance on overhead drone shots that get dull really quickly. There’s a noticeable lack of gore for most of the film, but the final third has a pretty good time splashing the red stuff across the screen. Not very effectively mind you, but it’s there if you wait for it. 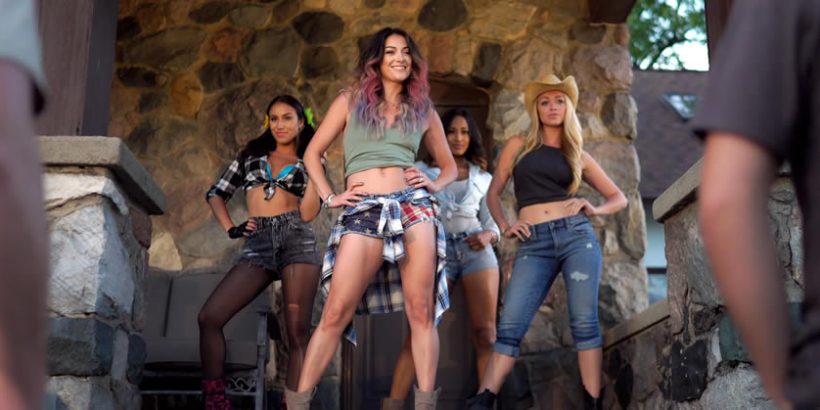 What’s interesting is that the script has a few decent ideas in it, but the film never takes advantage of them. Hunter’s fear of coming out to his parents, and their reaction is something that’s dropped pretty quickly. One of his friends announces she’s pregnant to the father, but nothing much is done with that either. The film announces these plot threads, but lets them dry up and wither on the vine in order to introduce its killer. I understand the excitement they must’ve had, thinking they have a new addition to the pantheon of memorable slasher villains, and wanting to get him in the film as quickly as possible. But there’s actually very little that’s original about Pitchfork, not to my eyes anyway. I’ve read a few reviews where he’s compared to Wolverine, but the first character I thought of when I saw him was Freddie Krueger. A far less entertaining Freddie Krueger actually. Later in the film, we’re given a pretty bogus explanation as to Pitchfork’s origin. I won’t spoil it here, but it makes no sense at all, and it doesn’t explain his invulnerability to all kinds of weaponry. But then again, no one can keep Freddy, Michael or Jason down either – can they? 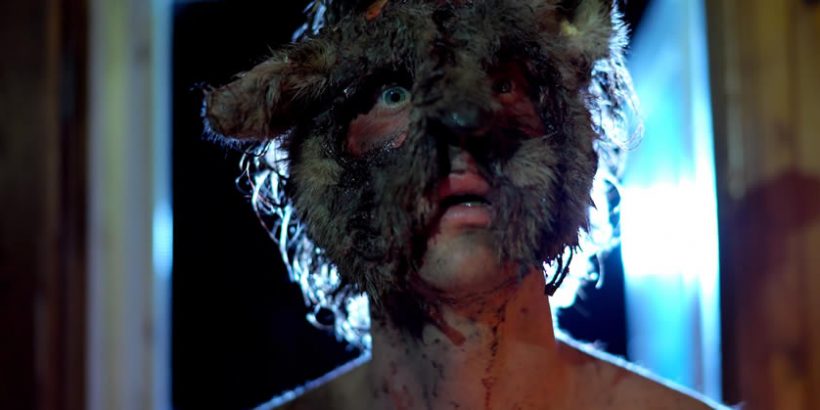 The performances are about as rote as you hoped they wouldn’t be. The direction is lacking to say the least. The story is the pits as well. So why have some critics fallen over themselves to offer a modicum of praise to Pitchfork? This sucker has even won a few awards! If you ask me, that’s what’s really scary about this mess – someone found it frightening (that and the fact that it’s left wide open for a sequel). If you’re starving for entertainment on a cold and rainy evening, then I guess Pitchfork will fill the bill. A better idea would be to find a real slasher flick to watch (try 1981’s The Prowler), and relive the days when slasher movies had guts.

Pitchfork  premieres in theaters and On Demand January 13, 2017 from Uncork’d Entertainment. 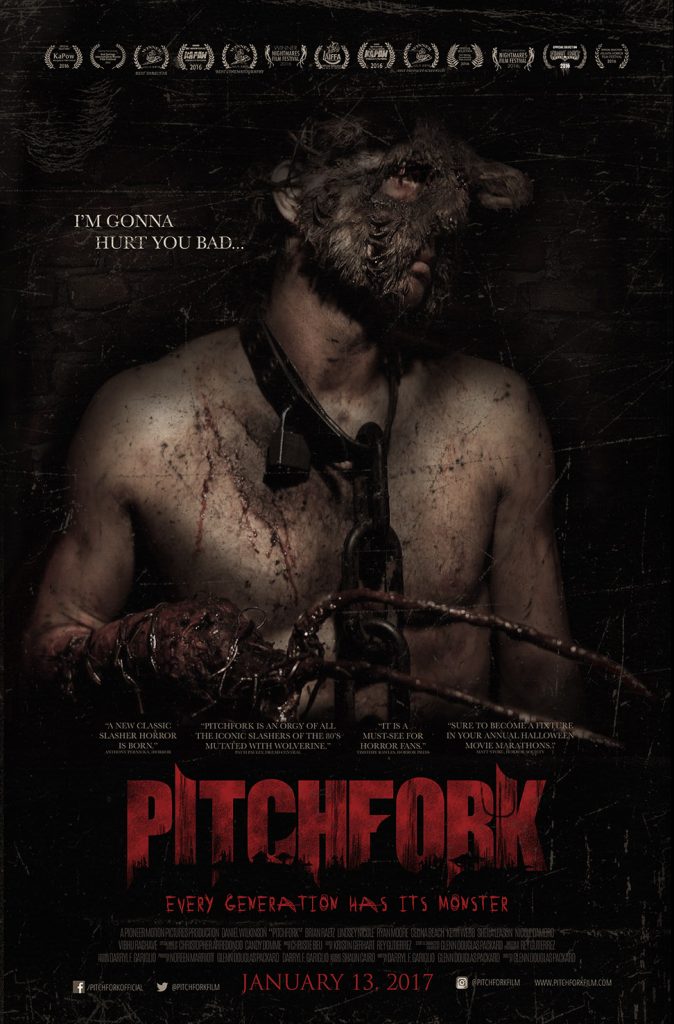 For me personally, it’s never a bad thing to have Heather Langenkamp starring in a horror film. She’s lovely, a really good (& underrated) actress & one hell of a nice lady to speak with (as I have). I genuinely enjoy watching her do her thing, no matter what kind of role she’s playing. Her […]

Eighties slasher throwback Slashlorette Party is a valentine to direct-to-video horror fare of that decade. It’s chock full of gory kills and naked gals, and is an impressive independent effort that rises above being mere pastiche. Brie (Molly Souza) is engaged to controlling, full-on chauvinist jerk Dolph (Andrew Brown). After consulting with her therapist Dr. […]

Director Daniel Rands’ U.K. horror short Peaking relies heavily on sound design to get its eerie atmosphere across. It does so quite impressively, resulting in a 7-minute shocker fraught with tension. After Sound Recordist Sandy (Louisa Harris) overhears one of her colleagues making a sexist remark about her, she stays behind in the house where […]