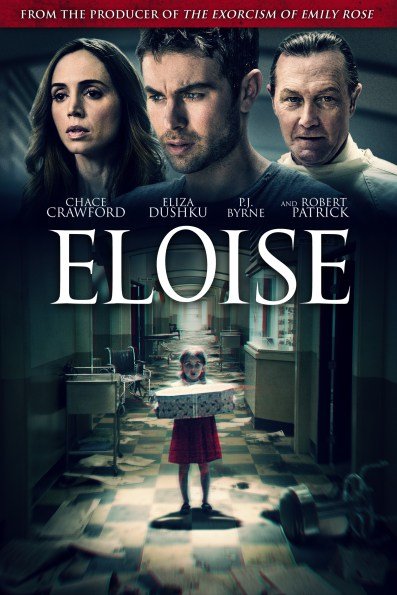 Eliza Dushku – there’s a name we haven’t heard in a while.   She’s no stranger to genre fare though and she’ll be making her return early in 2017 with the release of the haunted asylum flick Eloise.   News has just dropped that the flick will be making is US debut on Feb. 3rd.   It’s hitting theaters and VOD on the same day – so finding this one should not be an issue.

What’s it all about you ask?   Got you covered:

“The film is set in a defunct insane asylum known as “Eloise.” Four friends break into the abandoned institution in hopes of finding a death certificate, which will provide Jacob (Crawford) with the rights to a sizable inheritance. While inside the asylum, the group not only finds that the institution houses a horrifying history but also the truth about their own tragic pasts. They’re shooting in the Eloise Insane Asylum which was one of the largest mental institutions in the world. What began as one building in Westland, MI in 1832, rapidly grew into a 78-building self-sustained city, complete with its own fire and police departments, train station, post office and farms. Eloise closed its doors in 1982, and has since been dormant and left to ruin.”

Joining the lovely Ms. Dushku is Chace Crawford,   Brandon T. Jackson, and PJ Byrne.   As you’re going to see in the trailer – Robert Patrick is along for the ride as well.

Brea Grant is an actress well known to horror film fans for her roles in such films as After Midnight, Beyond the Gates, and Dead Night. She is also an accomplished writer and director, as evidenced by her new horror comedy 12 Hour Shift, which is currently on the film festival circuit. It receives its […]

Hot off the other day’s debut of production stills from the set – it appears that this week that the PR onslaught shall begin for what is building to be one of 2019 larger horror events – Pet Sematary. Today’s big news is our first look at a pretty damn cool teaser poster that plays […]

A Trio Of Clips Hearld Your Arrival To ‘Fantasy Island’

When it comes to things that I ever thought would get a horror movie make-over, I can honestly tell you that I never even considered that the classic ’70s and ’80s TV show Fantasy Island would be one of them. Granted – at times the show did venture into some darker storylines but there is […]