Shut In is the story of a family being torn apart by both external and internal forces. The family unit consists of the father; Mary, the stepmother; and Stephen, their teenage son. The film opens as Stephen’s father prepares to drive him to a boarding school for the summer. Even though Stephen has become too much for them to handle, Mary is clearly uneasy with the decision. As she discusses her apprehensions with Stephen’s father, Stephen sits silent and sullen in the car, glaring at them through the window. Once on the highway, Stephen and his father have a violent argument and Stephen wrenches the steering wheel from his father’s grasp and the car veers into the oncoming lane, colliding head-on with an eighteen wheeler. His father is killed in the accident and Stephen is rendered a near vegetative quadriplegic. He doesn’t speak or respond when spoken to and seems incapable of any movement except chewing and swallowing. Though he now requires manual feeding and bathing, he is able to sit in a wheelchair in front of a window or television. 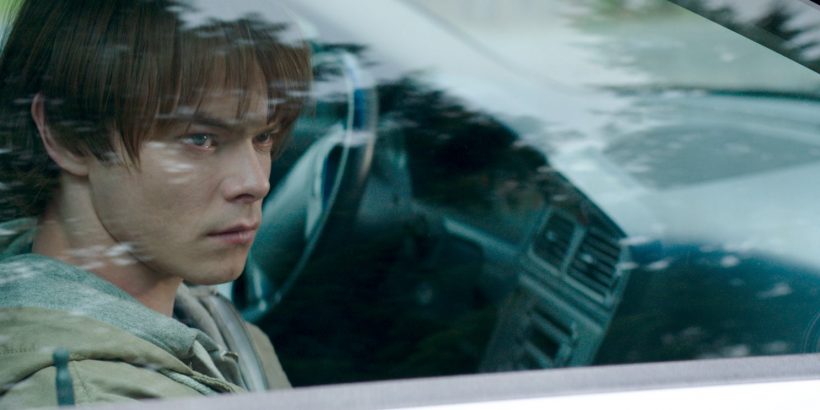 Mary counsels children and teens from an office next to her house and is able to supply all Stephen’s care. She also becomes attached to Tom, a young boy she is treating, but he is quickly shipped out to his next foster care destination. However, Tom manages to escape and shows up at Mary’s door. Mary immediately notifies the authorities that Tom is with her, but when he hears her making the call, he disappears again.

Stephen’s care and her job soak up all Mary’s time and leave her physically and emotionally drained at day’s end. With the addition of the stress  created by  Tom’s disappearance,  Mary is a psychological wreck. She begins to hear loud thumps and scratchings and senses movement in her peripheral vision, though she can never find the source. In fact, she is frequently in a fuzzy-brained, dream-like state and wonders whether or not she is hallucinating. When she’s finally certain her senses are telling her the truth, she contacts her friend and psychiatrist, Dr. Wilson. However, he’s not sympathetic and no matter how much she insists her experiences are real, he discounts them as dreams or hallucinatory episodes brought on by fatigue, stress and possible prescription drug abuse. Meanwhile, Tom is still missing and a storm has rolled in making his search and rescue nearly impossible. The stage is now set; divulging  anything more might reveal plot twists best left undiscovered. 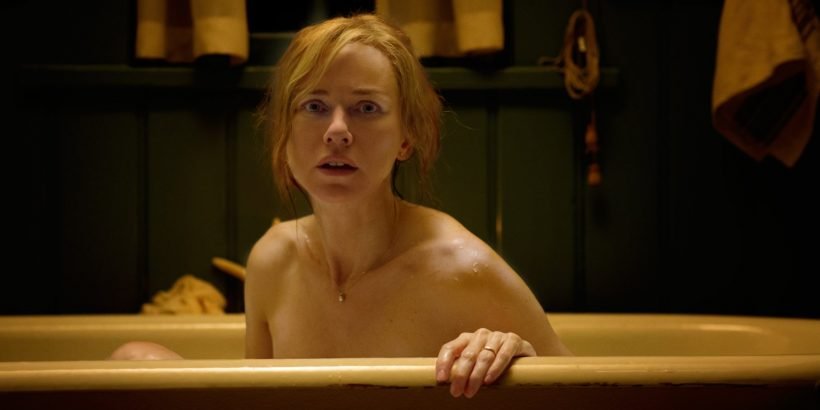 Written by first time screenwriter  Christina Hodson and directed by Farren Blackburn, who also directed two episodes each of Daredevil (2015) and Luther (2013), Shut In explores its titular theme in every way possible. Stephen is the most obvious, with no means of communication and minimal interaction with his environment. Mary is shut in a prison of her own making with bars of guilt and grief creating an overwhelming sense of obligation to Stephen. Tom is deaf and mute, shutting him in his own mind while greatly reducing his communication with other people. Even Dr. Wilson seems to be shut in by his preconceived notions, not really listening to what Mary is telling him and jumping to conclusion after conclusion, effectively barring himself from outside information. Even the setting echoes the title. Almost the entire film takes place in Mary’s house and when the storm hits, they are indeed trapped. The cinematography by Yves BÃ©langer works to enhance the claustrophobic nature of the characters’ predicament.  Many scenes are shot in small spaces and camera angles augment the feeling of being “shut in,” supporting the story’s  theme. 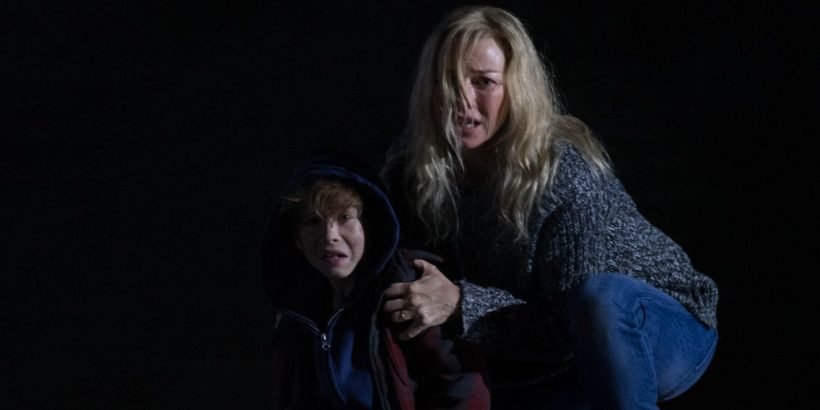 Shut In is a well shot, atmospheric film, with an excellent cast. Naomi Watts as Mary delivers her usual excellent and seamless performance, portraying Mary’s arc from a lethargic state in response to her situation to  her frustration, anger, and fear with the disappearance of Tommy and her inability to get Dr, Wilson to take her seriously.  Charlie Heaton, recently in  As You Are (2016) and Stranger Things plays Stephen. Heaton positively exudes teenage angst during the pre-accident scenes. He is immediately unlikeable while glowering at his parents from the car and causing the tragic accident, but he quickly transforms into a sympathetic character after the accident, taking on the emotionless affect of a patient in his condition. Oliver Platt’s portrayal of Dr. Wilson is also effective as a somewhat arrogant doctor who later, suddenly realizes his error and frantically tries to make up for it before it’s too late.Jacob Tremblay, who also appears in Mike Flanagan’s oft delayed Before I Wake (2017), does a decent job as Tom. David Cubitt‘s  role as the parent of one of Mary’s patients and a possible love interest is well done, though he has little effect on the story. 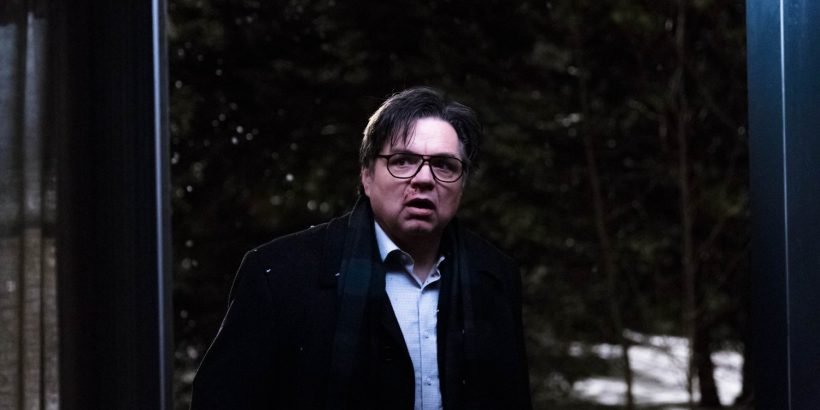 The problem with  Shut In is either with the script or with the way it’s translated to the screen. Mary, Stephen, and Dr. Wilson are all well-developed characters with arcs and actions that make sense, except for one glaring flaw. During the first half of the movie, Mary seems willfully ignorant of a possible alternate interpretation of what she’s experiencing. As the story progresses, the more obvious her obliviousness becomes and the more irritating it gets as it goes on and on. Eventually, the obvious twist is “revealed,” also serving as a red herring of sorts – there’s a bigger reveal to come. The final twist and ensuing developments are quite captivating, but that doesn’t make up for the irritating cluelessness of Mary in the first two-thirds of the movie. It truly is infuriating.

The acting, atmosphere and final denouement in  Shut In  make up for most, but not quite all, of what you’re put through in the first two acts. In the end, I’m glad I watched it, but just barely. 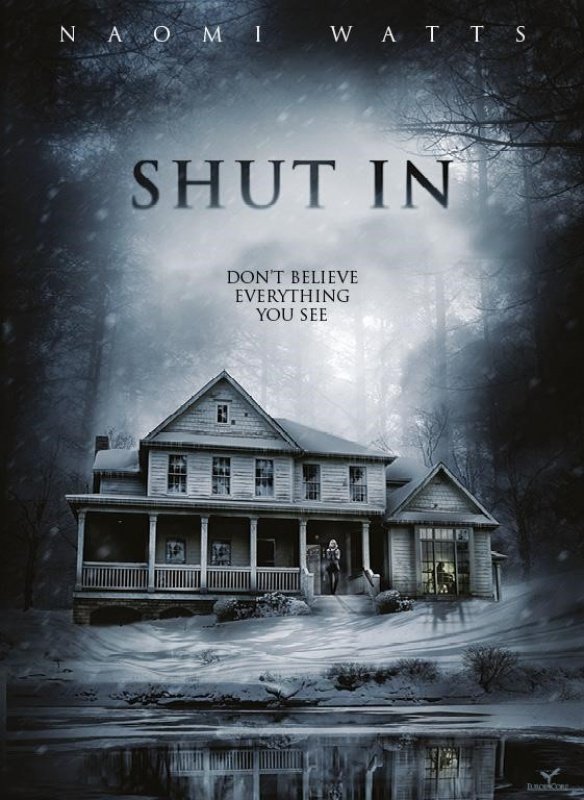 The Black Saint chimes in with his review of the sci-fi horror thriller Alien: Reign of Man (2017). The film is by writer/director Justin Price. The cast includes  Khu, Torrei Hart, and Deanna Grace Congo. And you can count on The Black Saint to not let anything slip by him – hold onto your hats, […]

Outstanding performances from a talented cast, a suspenseful screenplay with sharply written dialogue, and a crackerjack directing effort make Patrick Rea’s new feature film Arbor Demon (formerly titled  Enclosure)  one of the best films currently on the festival circuit. For this reviewer, it is also one of my favorite horror films of the year. Photographer […]

“Wind Walkers” (2015): Wandering Tale of Terror in the Everglades Lacks Focus and Bite

If the rest of Wind Walkers kicked as much butt as the soundtrack, I could give this “8 Films to Die For” entry a strong recommendation. Unfortunately the power-chord rock and revisionist blues songs were more powerful and exciting to me than the movie’s characters, performances, or perplexing story. There are moments of promise, though. […]