The ending of a film can sometimes change how one feels about it. A crappy ending can scuttle an otherwise good picture, while a well-done finale can elevate a mediocre movie. It does not have to be an M. Night Shyamalan-style twist to be a good ending; it just needs to wrap things up in a manner that make sense for the story. Such is the case with The Initiation (1984). Three young sorority pledges have to break into the local shopping mall at night as part of their initiation. Little do they know that a killer is on the loose, and that the killer just may have something to do with the strange nightmares that have been plaguing one of the pledges. While the film is derivative of any number of low-budget slashers of the early-to-mid-1980’s, it still manages to shine at times. Much of it is shot in a fairly pedestrian manner, but there are occasional flashes of inspiration, enough to keep the audience interest. Seemingly unfocused at first, the ending of the film wraps things up nicely, tying together what seem like disconnected story threads. The results is a decent and satisfying representative of the genre. 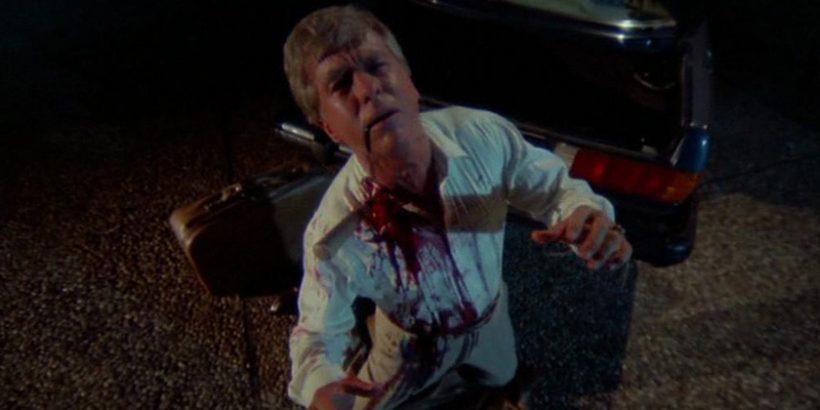 College student Kelly Fairchild (Daphne Zuniga in her first leading role) is having a rough time lately. Not only is it Hell Week at the Delta Rho Chi sorority where she is pledging, but the recurring nightmares that have plagued her since her youth have picked up again as well. The nightmares involve her being nine years old and walking in while her parents are having sex. (Which is admittedly a pretty common nightmare/real life experience.)  Scary enough as that is, it gets worse in the dream as she stabs her father Dwight (genre favorite Clu Gulager) in the shoulder while her mother Frances (screen legend and Psycho’s Vera Miles) screams in horror. Suddenly, an unknown man rushes in and begins to fight with her father, and in the process, the mystery man falls against the fireplace and burns. To help suss out what may be causing these dreams, Kelly hooks up with (in more ways than one) her Psychology teaching assistant Peter (James Read). Peter and his lab technician Heidi (Joy Jones – looking very much like Barb (Shannon Purser) from Stranger Things) hook Kelly up to the machines in their “dream lab” to see what may be going on. It seems that Kelly has a lot on her mind; as part of their sorority initiation, she and her fellow pledges, Marcia (Marilyn Kagan) and Alison (Hunter Tylo as Deborah Morehart), have been tasked with breaking into the massive department store/shopping mall owned by Kelly’s father and stealing the night watchman’s uniform. Unbeknownst to them, several inmates have recently escaped from the local private sanitarium, including a man sporting severe burn scars (Robert Dowdell). (I wonder who that could be?) One of the inmates is on a killing spree, and it looks like they are about to pay a visit to the department store/shopping mall. 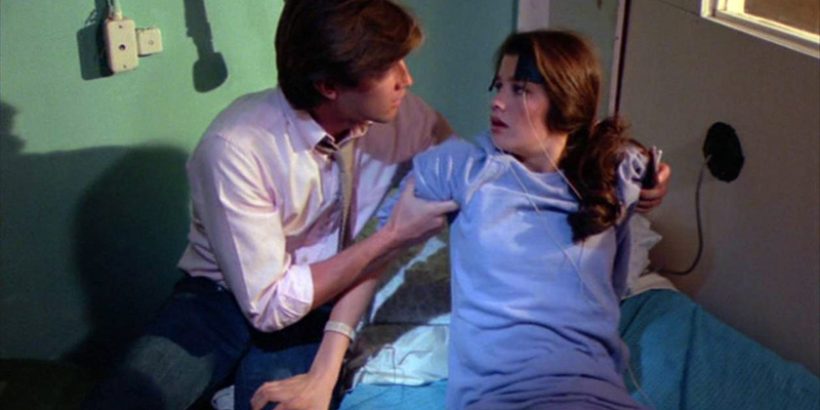 At first glance, The Initiation looks like any number of sorority-girls-in-peril slasher films. It has many of the common tropes, such as first-person shots of the killer stalking their victims. It would not be a sorority slasher picture if it did not have the required scene where the killer spies on the half-naked sorority sisters through their windows. (Do sorority houses not come equipped with shades or blinds?) The score is very derivative of many of John Carpenter’s scores from the early 1980’s, though going a tad lighter on the synthesizers than Mr. Carpenter does. The gore is nothing to write home about; it is fairly low-key. Most kills are simple stabbings, and most of those are shot with close-ups of the murder implements piercing clothing. The one real standout is Alison’s fairly bloody demise, though it still does not reach the state-of-the-art for 1984, such as that featured in A Nightmare on Elm Street (1984). 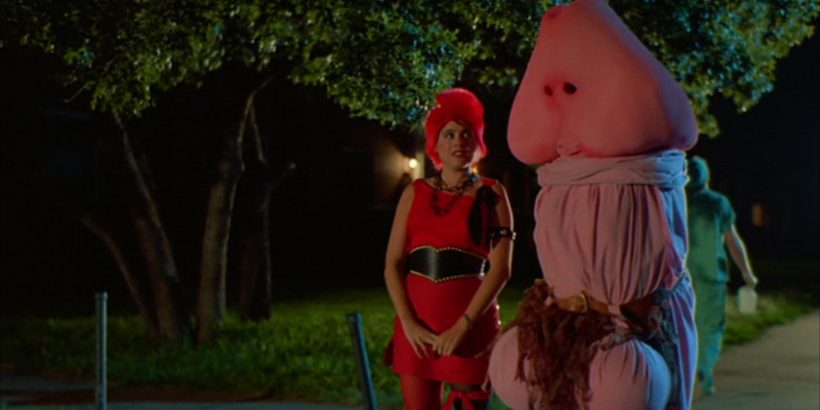 The film switches between visual styles, sometimes utilizing highly stylized shots, and at other times its cinematography seems quite mundane. This is most likely because the initial director was replaced after three days for being two days behind schedule. The majority of the film is lensed by cinematographer George Tirl and directed by Larry Stewart. The Initiation is Stewart’s only theatrical directing credit; all of his other directorial efforts are from television. This may explain why the bulk of the film has a television-like feel to it, with very basic set-ups. The film’s tight budget and shooting schedule also contribute to this quick and simple approach. That said, there are some moments that do stand out visually and dramatically, even in the portions of the film helmed by Stewart. On a number of occasions, Stewart teases the audience with brief glimpses of the killer hiding in the shadows or as an obscured reflection. These work really well and do help ratchet up the tension. Likewise, the filmmakers make good use of the unusual shopping mall setting. Locating the third act of the film in a giant shopping mall may see derivative of genre-classic Chopping Mall (1986), until one realizes that The Initiation proceeds that film by two years. 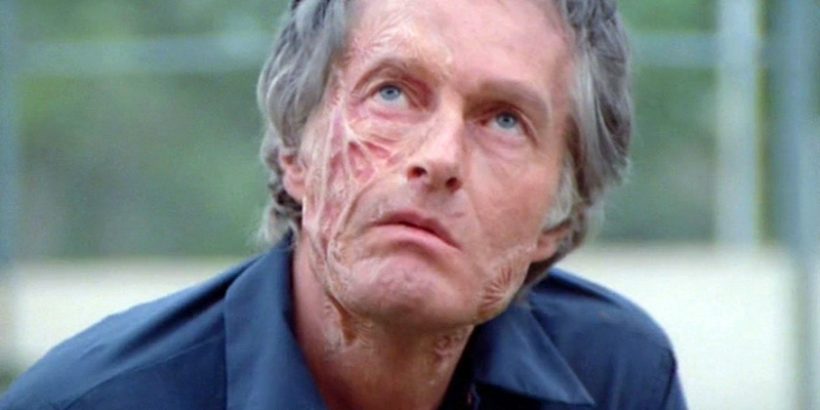 From the title of the film and its poster, one would think that The Initiation perhaps deals with witchcraft or the supernatural. Instead, it is essentially a slasher, though it mostly forgoes the gore associated with that genre and leans heavily on the mystery aspects as well as a touch of soap opera. Screenwriter Charles Pratt Jr. does a nice job of sprinkling throughout the film hints to the mystery’s resolution. He provides a number of possible directions in which the story could go, so it keeps the viewer interested. Some audience members may feel that they have things figured out early on and that the “mystery” is somewhat mundane. That said, the film’s conclusion, while it may not be surprising to some, is still well crafted. Instead of ending with an extended denouement wherein a character explains the entire film, the filmmakers trust their audience and allow the actors to “say” all that they need with just a few well thrown glances and facial expressions. This economy of storytelling elevates the rest of the film, making for a satisfying viewing experience in the end. 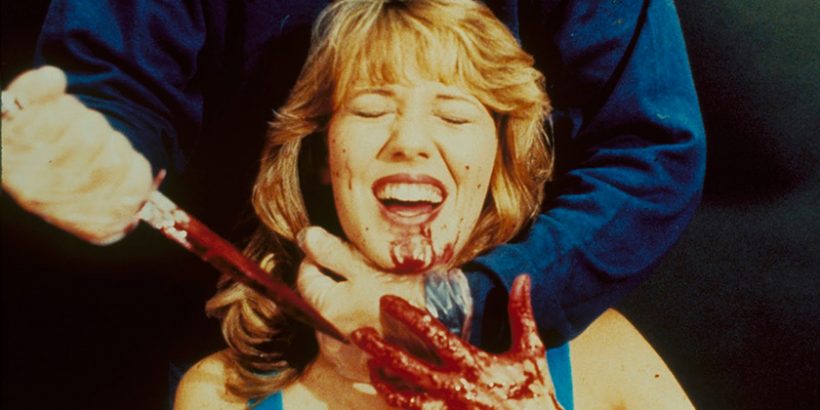 The Initiation may not be a “top-tier” 1980’s slasher, but it does a nice job with what it has. Much of the film feels familiar with its sorority stalker plotline and run-of-the-mill gore. While a goodly portion of it is shot in a nondescript style, there are little visual gems here-and-there, especially once the action moves to the shopping mall location. Some viewers may figure out the resolution to the mystery pretty early on, but the filmmakers do such a nice job of wrapping it up that it still elevates the film above its mediocre roots. When all is said and done, The Initiation is a pretty good little low-budget slasher with a conclusion that will leave the audience satisfied. 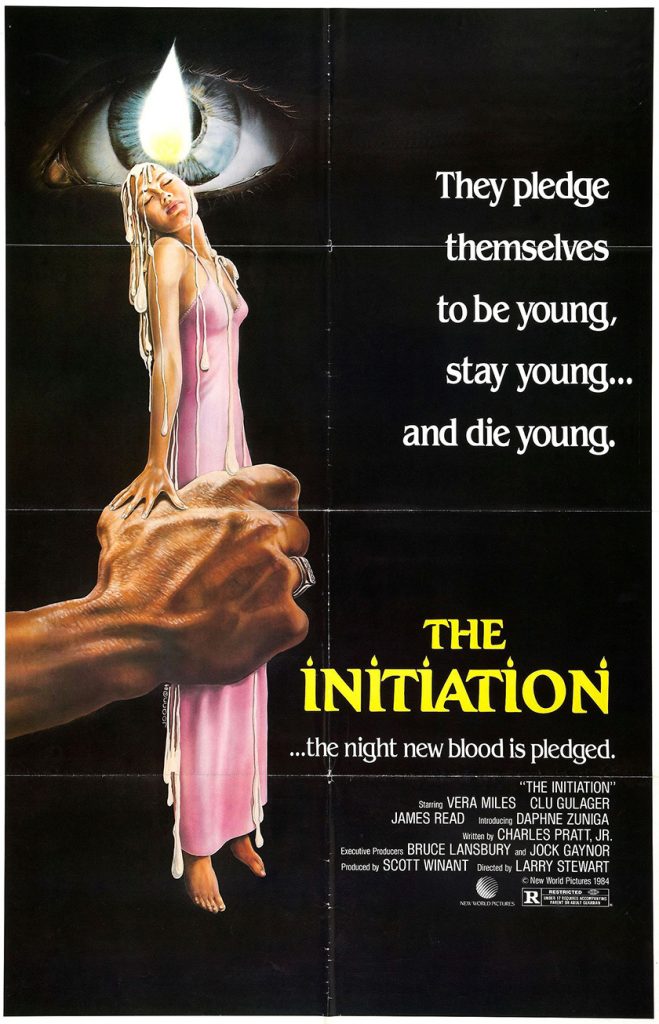 Writer/director Caroline Lindy’s horror comedy Your Monster is a sharp, sweet short film that explores relationships with lovers and friends — while wryly commenting on social topics such as gender neutrality — through the eyes and mindset of a young woman and the monster that has lived in her bedroom closet since she was a […]

It dawned on me while watching Willy’s Wonderland that Nic Cage has become this generations William Shatner – he has become a parody of the very acting style that made him famous and in case you’re wondering – that’s not a particularly good thing. You can probably already guess where this review is heading but […]