Christmas with extended family is always fun, right? Always full of joy and merriment? The answer is of course no. The holidays are full of bitter tension between families, given that the conflicting personalities that are all tightly compacted under one roof.  Red Christmas  directly confronts this holiday tradition with a horror edge, as the sins of the mother come back to roost in a deadly form. Still, the relatable factor of a strained family persists throughout, making the conversations awkward yet genuine so as to give each brutal blow more impact. It’s one thing to potentially hate a member of your own family, but when your last words to them were spiteful or hateful, it only makes the carnage more harmful.

Red Christmas  starts with a prologue that’s perfect for any holiday season: an abortion clinic being bombed! In the middle of all this hysteria, a small hand rises out of a watery bucket and a doctor carries the clinging fetus away. Several years later, Diane (Dee Wallace) is preparing her beloved family home for the holiday season along with her country stoner brother Joe (Geoff Morrell), her youngest daughter Hope (Deelia Meriel) and son Jerry (Gerard O’Dwyer). Her other children arrive, including the rambunctious  & heavily pregnant Ginny (Janis McGavin) and her husband Scott (Bjorn Stewart). She has a constant contentious relationship with her  uptight religious sister Suzy (Sarah Bishop) & her sexually repressed preacher husband Peter (David Collins). As their inner family frustrations begin to rise with bickering and foul behavior, there’s a knock at the door. Diane, ever the loving caregiver, brings in Cletus (Sam Campbell), a man wrapped head to toe in bandages and obscured by an elaborate cloak. He claims to be a long lost son rejected by Diane at an abortion clinic, which throws Diane into an uncharacteristically hysterical rage, forcing the cloaked figure out of her house. Now, the family must survive this  Red Christmas  in their house as this mysterious figure disembowels them  one by one like presents under a tree.

While not an uncommon narrative for a bottle horror film,  Red Christmas  has the advantage of an unflinching sense of brutal force on its side. Whether its the realistically contentious behavior between the family or the gory deaths that occur, there’s a frank bleakness that permeates the entire run time without much of any real filler. Writer/director Craig Anderson convincingly weaves these people together as a family with clear strain without over explaining too much. He simply drops big reveals that would feel true to an argumentative family setting, like the fact that the family home is being sold off by Diane so she can go on the European trip her late husband wanted her to take. Suzy is receptive to her mother’s needs, but more for the sake of clashing with Ginny’s possessive hold over the family house. It’s a petty conflict, but one rooted in real family drama stakes that gives a sense of reality to the crazier gory sequences that transpire. Every time these people lash out at each other, there’s both a sense of relatable cringe and worry that it’ll be the last thing one member says to the other.

That harsh back and forth  in Red Christmas  is especially tragic to see transpire from the perspective of Dee Wallace, whose every teary eyed stare proves that she has a genuine pathos that serves as the emotional backbone of this bloody tale. As her family and holiday falls apart around her, there’s a massively emotive sense of fear that gives way to protective hatred against this creature that represents a sense of regret and turmoil from her past. It’s just further proof that Wallace is still one of the best genre actresses out there. Those intense emotions spill over into the other cast members of Red Christmas, mixing a sense of family with a survival mode that kicks in for everyone. This especially comes to light in the turns for Geoff Morrell’s Joe character, turning from a pot smoking country man to a serious survivalist and Gerard O’Dwyer with one of the more emotionally heart wrenching performances from an actor with Down Syndrome I’ve yet to see on film.

Of course, the big question from any horror fans is how  Red Christmas  works in the merry mayhem. Well, while the kills are impressively gory and creative, there is a rather large question looming over how any of this is accomplished. Our cloaked stranger  Cletus is a clearly brittle man. He’s covered in bandages that – as he mentions – keep his skin on his body and shambles with the speed of an octogenarian. Yet, he’s able to pull off some impressively elaborate and strength based murders on a consistent basis. For a film as based in the reality of human interaction as  Red Christmas  is, some of these things stretch the limits of one’s suspension of disbelief. Still, Cletus is an interesting killer on  visual level for a Christmas set tale, given his Ghost of Christmas Future cloak that adds a sense of foreboding.  There’s a curiosity of the  political context given the opening  abortion clinic bombing and what Anderson is trying to say, but it doesn’t distract too much from the larger themes of family and what tears that apart.

Red Christmas  clearly knows it’s  an entry into a crowded pantheon with holiday horror. The title implies a connection to classics like  Black Christmas  that took the warmth of friends together for the winter season and gave it a terrifying voyeuristic bleakness. While  Red Christmas  doesn’t necessarily match up to that very high standard, it’s still so immersed in the glow of the holiday season, but with the bitter underpinning that turns things sour on a constant basis. Craig Anderson bathes so much of the frame in Christmas lights that turn from celebratory hues into garish spotlights of terror & faults of human nature.  Red Christmas  shows a sense of how profane the holiday season can become due to inner bickering between family members. It has a cold precise reasoning behind every kill, but each one is based in the conflict and tragedy of the family taking each other for granted. After all… the grass is always greener on the side without a cloaked stranger trying to murder your entire family. As the old saying goes. 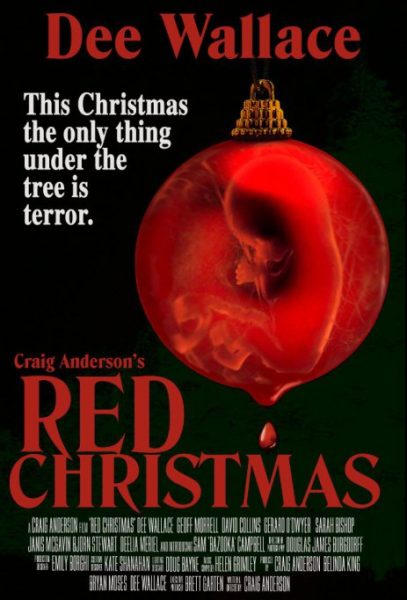 Two years after his dark, surreal cult classic Testsuo: The Iron Man was unleashed on an unsuspecting world, director Shin’ya Tsukamoto unveiled his first studio effort, Hiruko the Goblin (1991). Based on two yōkai stories from manga artist Daijiro Morohoshi, the film is a frenetic, madcap tale of demons whose gate from Hell happens to […]

“Lilith’s Awakening” (2016): A Young Wife’s Surreal Odyssey Leads Her Down a Nightmarish Path

Existing in a netherworld somewhere between the surreality of David Lynch’s early films and the eerie domain of Carnival of Souls – but absolutely its own unique achievement – writer/director Monica Demes’ horror offering Lilith’s Awakening is a bold, extraordinary vision filled with gorgeous imagery and inescapable dread. Sophia Woodward is a marvel as Lucy, […]