Star Trek  isn’t an action heavy property. In its initial form of The Original Series, Star Trek  existed as more of an excuse for exploring new territories. The intrepid crew of The Starship Enterprise was there to talk to other species, only using lethal force when necessary. Even when the franchise went cinematic with 1979’s  Star Trek: The Motion Picture, it took more from  2001: A Space Odyssey  than  Star Wars to middling effect. Now, twelve films and multiple cast members later,  Star Trek Beyond  directly faces  the conundrum of having to balance the spirit of exploration that the universe was created under with the action necessities of a modern blockbuster. Paramount helped emphasize this by giving the modern  Trek  reigns from director of multiple The Fast and the Furious  films  Justin Lin  after Star Trek ’09  and  Star Trek Into Darkness  director  J.J. Abrams  mostly jumped ship to direct  Star Wars: The Force Awakens  while staying on as a producer.  Could Lin  succeed?

When we meet back up with the crew of The USS Enterprise at the start of Star Trek Beyond, many of them are in the middle of trying times. Captain James T. Kirk (Chris Pine) is dealing with potentially being Vice Admiral and the looming mortality ghost of his father. Commander Spock (Zachary Qunito) is torn between his desires to get the remaining Vulcan race thriving and his strained relationship with Lieutenant Uhura (Zoe Saldana). While the crew is on a Starbase for shore leave, an escape pod arrives from a nebula with an alien who claims her ship is stranded on a nearby planet. The Enterprise decides to investigate, only to be surrounded by ships that kidnap most of the crew and damage their beloved ship beyond repair. Now,  disparate pieces of the main Starfleet crew must try to reunite in order to stop an alien warlord Krall (Idris Elba) who’s hellbent to stop The Federation at all costs.

The biggest trouble with  Star Trek Into Darkness  was that the fan service guided the plot over the characters, something oddly avoided by its predecessor.  Star Trek Beyond  knows to avoid those pitfalls – as well as avoid stupid ideas like using a tribble to cure death – and bring things back to basics. At its heart,  Star Trek Beyond  is a character based story  in space, setting up the  conflicts of our major characters well enough so their struggles with the plot help them deal with their inner turmoil. The best example is Kirk, directly facing the fact that he will soon be older than his father ever was. Chris Pine exhibits the brash cockiness and weighted worry that shows how well he’s grown into the Kirk character, particularly with his responsibilities as a captain. The moment where he watches the USS Enterprise fall, there’s a real hesitation on Pine’s face as to whether or not he should go down with it. It’s not directly exposited, but scenes like his drinking banter with Karl Urban‘s Dr. McCoy show off how heavy that concept is on his mind.

That banter is something  Star Trek Beyond  plays with for all the characters. Screenwriters  Simon Pegg and Doug Jung  integrate this by separating the crew into disparate pairings in order to keep a solid balance of stakes and levity throughout. Pegg’s Montgomery Scott’s encounters with the frank and badass Jaylah (Sofia Boutella) have an odd chemistry that also develops the societal hierarchies of our major planetary setting. Kirk and Chekov (Anton Yelchin) trying to decipher the motives of our mysterious marooned alien builds tension behind the attack while leading to some of the more creative action sequences. McCoy tending to Spock’s serious injuries builds on the themes of mortality while imparting a  The Odd Couple  style chemistry in their back and forth. Even Uhurah, Sulu (John Cho) and the rest of the crew being trapped in Krall’s clutches gives them a bit of comradery business as more is revealed about the mysterious warlord brought to life wonderfully by Idris Elba’s memorable if occasionally inaudible snarl. All of these subplots are full of sci-fi action, but the type that’s at least partially fueled by character conflicts.  Star Trek Beyond  actually utilizes something few other blockbusters have in this summer 2016 movie season: stakes based in character.

Justin Lin’s directorial pizazz shines around Star Trek Beyond. Lin knows how to adopt his style into the  Star Trek universe that J.J. Abrams reestablished, but set his action in appropriately  Trek  style sheen. The planet has gold rocks that mirror the average Original Series episode budget. The woodlands feel like a locational episode with a few pixies to make it alien. The villains have gloriously odd sculptures of make up that use simple contortions  to define an alien race. It’s minor budget aesthetics with a larger than life feel. The action escalates the plot mechanics well, but it’s also so inventive.  Lin’s bonkers action style displayed in cinematic joy rides like  Fast Five  may not seem fitting to the exploration heavy concept of Trek, even if Abrams had reinvented the franchise as a more action heavy concept. Yet, Lin’s ability to mix action with endearing character interactions fits the concept of  Trek  quite well, making  Star Trek Beyond  the fresh fun adventure we needed after the overly dark and repetitive  Into Darkness. Scenes like Chekov and Kirk being chased through the crumbling Enterprise at varying angles or the finale zero gravity fist fight are full of high energy, tension and dazzling visual turns.

Above all,  Star Trek Beyond  feels closest to the original ideas Gene Roddenberry wanted to inspire from his creation: the power of science and human progress. There’s a recurring thematic element  about Starfleet’s hopes to study and help life  throughout the universe. We see Kirk’s drive to help a stranded being. Spock’s  selflessness despite increased pain. Scotty’s inherent empathy for an alien being with true loss. It’s a warmth and brightness that reminds one of the more memorable yet light flair of  Star Trek IV: The Voyage Home, yet still has the contemplative  weight of a Star Trek VI:  The Undiscovered Country. This cast’s comradery and lack of overt cynicism is refreshing in a summer of forgettable mediocrities.  Star Trek Beyond  does a remarkable job of weighing spectacle with genuine human emotion. That and the discussions of Spock Prime’s absence put  the passing of Leonard Nimoy and the tragic youthful loss of Anton Yelchin into perspective, but don’t distract from the adventure we’re on.  Star Trek Beyond  isn’t top tier  Star Trek, but it’s a worthy memorable entry.  And all without screaming “KHAN!” while punching Benedict Cumberbatch… seriously, screw  Into Darkness. 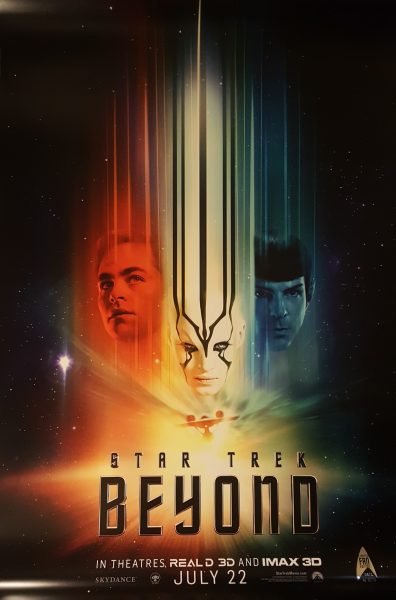 Crass, boorish, insult-slinging Scott (played by writer/director Zach Noe Towers) is such a pain to his friends that they want to kill him – quite literally – in the horror comedy short Killer Friends. The short blends rapid-fire sass slinging and Looney Tunes-style physical comedy with its tale of attempted and reattempted murder. Scott’s roomate […]

“Caltiki: The Immortal Monster” (1959): Boring Blob but With Bits of Bava

There is a certain charm to 1950s low-budget monster flicks, though that charm can only take one so far. Caltiki: The Immortal Monster (1959) is an Italian riff on The Blob (1958). Scientists investigating possible causes for the fall of Mayan civilization discover a hidden cavern filled with treasure – and occupied by an amorphous […]

“The Bye Bye Man” (2017): A Disappointing Blemish on the Face of Horror

“Don’t Think It! Don’t Say It!” The Bye Bye Man opens up tons of negative opportunities with both the title and its tag line. Given how terrible the film is, it is almost too easy…too tempting. The film falls flat on its face, stumbling aimlessly along with an erratic handling of its premises and concepts, […]