There are some film genres that are simply best enjoyed by viewing their trailers and not the movies themselves. “Nazisploitation” is one such genre, at least for me. There are some terms one does not want forever linked with one’s name in Google search results. Once again, “nazisploitation” fits the bill. As such, watching and reviewing the 1978 French nazisploitation film Helga, She Wolf of Stilberg (Helga, la louve de Stilberg) is not at the top of my bucket list. “Did you say you are reviewing the infamous 1975 exploitation classic Ilsa, She Wolf of the SS?”, you ask. No, this is Helga, She Wolf of Stilberg. Think of it is if The Asylum (distributor of such mockbusters as Transmorphers and Titanic II) did their own version of Ilsa. “Well, it should at least have ample amounts of fetching nudity,” you say. Nudity it does have in ample amounts, but never before has nudity been so dull. “Well, it should be fun to watch in a so-bad-it-is-good sort of way, yes?” No, it is painful to watch in a so-bad-it-is-bad sort of way. 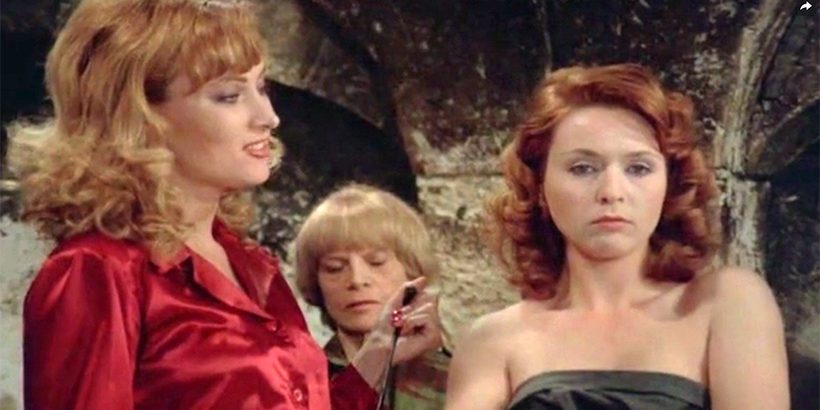 At the start of the film, our title character, Helga (Malisa Longo), appears to be a member of the cabinet of an unnamed country headed by a neo-nazi dictator. After a heated discussion with the head of state during a cabinet meeting, Helga is reassigned as the warden of the prison at Stilberg Castle, where political prisoners are kept, including the daughter of the opposition leader. It does not seem like it would be much of a burden to run such a prison, as there appear to be only about eight to ten prisoners there being guarded by maybe eight to ten guards. Unsurprising for this genre, all of the prisoners are young women in their twenties. The rest of the film mostly consists of Helga storming around in tight pants while carrying a riding crop and the women being sexually assaulted by the guards and Helga.These scenes are broken up by shots of the prisoners sitting around on their cots in various states of undress and of Helga riding her horse across the countryside. At some point, (spoilers) the daughter of the rebel leader escapes and joins her father, who leads his team of rebels (all ten or so of them, if that many) in storming the castle.

One does not go into an exploitation film expecting Oscar-quality acting, so it is a bit unfair to judge it as if one did. That being said, watching this film does not exactly inspire me to feel charitable, so I will press on with discussing the acting. The one thing I can say is that the acting in the film is consistent; it is terrible across the board. Malisa Longo as Helga wears an expression that sits somewhere between disgust and confused anger throughout the film. The actors portraying the prisoners and guards are no better. I am sure that being a prisoner or a guard is extremely boring, but the actors maintain their bored expressions into the scenes where they are being abused or attacked. They seem to be as excited about being in this film as I am watching it. The poor line delivery by the English speaking actors dubbing the film compliments the poor physical acting of their French counterparts. This may not be entirely the fault of the voice actors, though. They do their best to match the lip movements of the French actors, but since French has a different cadence than English, the dialogue come comes across as very stilted and strangely staccato.

Let us be honest. Nobody watches a nazisploitation film for its plot or its acting; they watch for nudity, softcore love scenes, and mild S&M. Not being a connoisseur of such films, I cannot really say how well Helga, She Wolf of Stilberg performs in these areas when compared to the rest of the genre, but if those films are as boring and incompetent in their execution as Helga, the genre would not have what fans it does have. There is plenty of nudity in Helga, with nude scenes showing up at least once every five minutes. Aside from the fact that one gets jaded by the near-constant exposed flesh, it is not presented in any sort of enticing way. Prisoners sitting around on their cots naked and looking bored is not exactly erotic. Even when the filmmakers try for “erotic” nudity, the actors just cannot pull it off. The softcore “love scenes” mostly consist of the female prisoners being sexually assaulted by the guards and Helga herself. I do not find sexual assault sexy, but I cannot imagine even its fans getting any sort of pleasure out of the adolescent fumbling and heavy petting that makes up the bulk of those scenes. The “consensual” love scenes fare no better; they look as if they were choreographed by someone who once heard a rumour about this thing called “sex”. The one or two cases where Helga uses her ever present riding crop to whip a prisoner, she wields it so briefly and mildly, it barely registers to the viewer. Did I mention that the nudity and love scenes were boring?

One of the worst things one could say about a film is that it is “boring;” this goes doubly so for exploitation films. Helga, She Wolf of Stilberg fails in a big way on this front. Not only is the ample nudity tedious, but the scenes between “love scenes” provide an equal lack of interest. The viewer is subjected to repeated shots of Helga riding her horse, prisoners laying down bored on their cots, and soldiers sitting around idly in a hay-filled barn. Most of the film appears to be take place in four or five rooms, with a locked down camera, and no visual interest at all. The film is so lacking in anything to keep the viewer engaged, I can not even imagine it being a fun film to watch with friends while making snarky comments (a la MST3K). 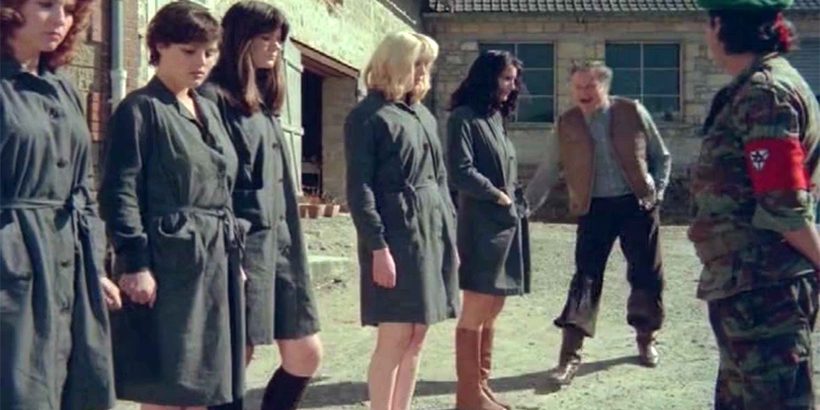 Helga, She Wolf of Stilberg is a poorly executed and lifeless entry in a classic exploitation genre. It commits the greatest sin an exploitation film can commit; it is mind-numbingly boring. The only positive thing I can say for it, and the only reason it does not receive “zero stars,” is that the poster is a nice example of exploitation artwork and is reminiscent of the covers of men’s adventure magazines. The film itself has nothing with which to recommend it, not even for an evening of watching with friends and ripping on it.You would be better off grabbing a copy of Ilsa or any of its numerous sequels than watching this.

Helga, She Wolf of Stilberg 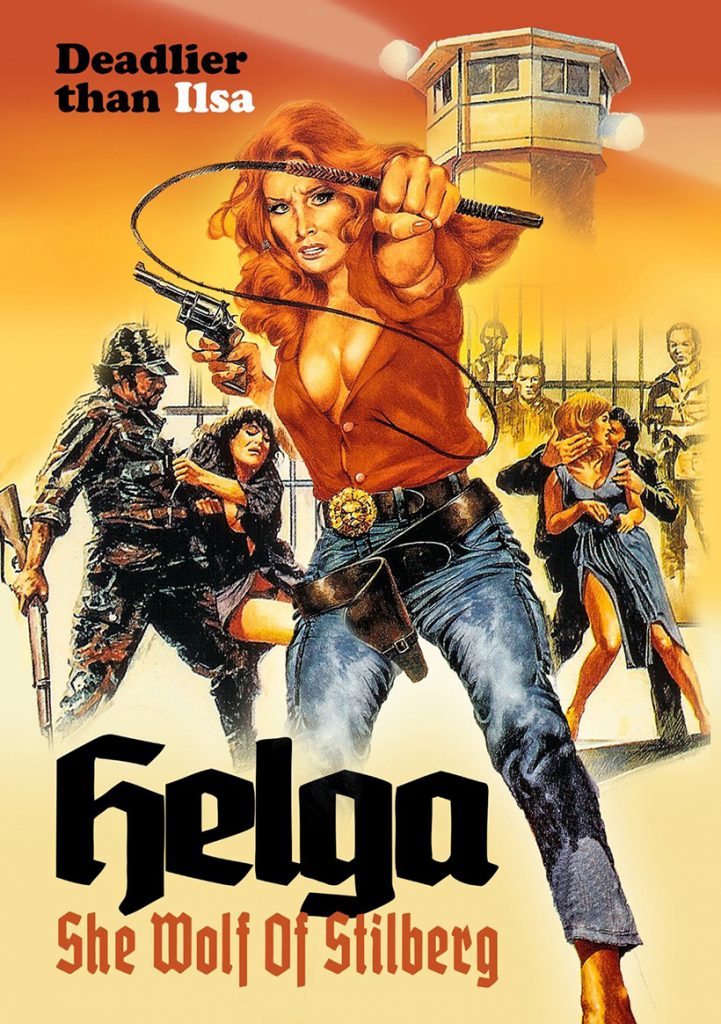 In just a couple of days, Netflix will release the 8-episode series RESIDENT EVIL to the zombie-loving masses. Set in the future – the series will take the popular video game and film franchise in a bit of a different direction – if that’s a good thing or not awaits to be seen. Today Netflix […]

Not to be confused with the Albert Camus novel of the same name — although it could be argued that there is a peppering of existentialism on display at times here amongst the nihilism — debuting director Guillermo Amodoe’s Chilean effort The Stranger offers up a fair share of moody brooding. The titular character, also […]

Last February, we told you about the new film The Heretics coming from makers of Bite (2016) and  Bed of the Dead (2016). Now we have a trailer for you.  Black Fawn Films and Breakthrough Entertainment  have released the first trailer for their cult possession/body horror mashup. Let’s take a look: It looks pretty creepy. […]