Don’t get me wrong. I looooove me some Superman and Batman. I grew up a huge Marvel fan, The Fantastic Four being my all time favorite. Especially Ben Grimm, The Thing. And the rest all fall in behind that. Spider-man, Hulk, Thor and the rest.  But I hold just as big a place in my heart for Superman and Batman over at DC comics.

Growing up, I bought every comic I could get my hands on. I mowed grass, had paper routes and even saved my lunch money just so i could go out and buy my favorite comics each week from an old  rusty rack inside a drug store near my house. I walked uphill both ways of course.

All the Marvel comics were bought up first, and if I had any money left, I would pick up Superman, Batman and  World’s Finest Comics, which featured a team up story of both characters in each issue. I found myself more and more wanting to read these adventures in these comics just as much as the Marvel titles. I was hooked.

I also became interested in the history of these characters and wanted to read their earlier exploits as well. Back then, it was easier to find back issues of Marvel Comics to read older stories than it was DC. If you wanted to read back issue  Superman  comics, the only ones at my disposal were the giant, oversize Treasury Editions DC published. These opened a whole new world to me for these guys.

I mean, look at this guy. To my ten year old eyes, this dude with the big red “S” on his chest held wonders that a lot of other characters did not. He could fly, for Pete’s sake! Reading Superman and Batman comics in the seventies really cemented my idea of what Superman was to me. A Kansas farm boy with the powers of a god who always tries to do the right thing.  That is Superman to me. And it’s why I love the character so much. It’s a simple idea that when done right, is glorious. 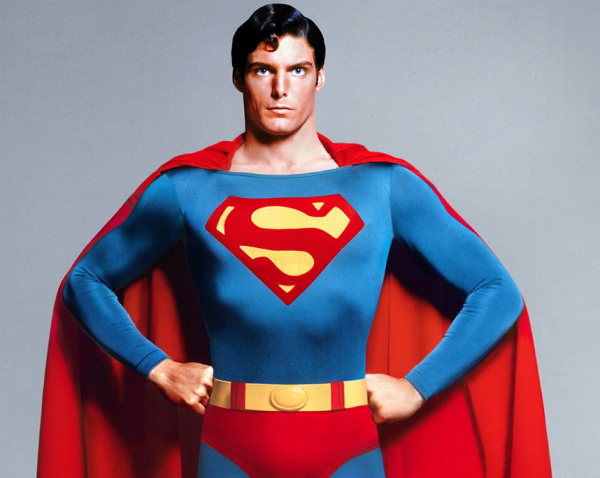 Is this the Supes I know and love? Not necessarily. But, these types of Superman stories are wide and varied in the character’s long history. And as a fan, you take the good with the bad. Writers and artists have to keep the character relevant and interesting when they have been around for so long. Sometimes you win, sometimes you lose.

Batman has also had his share of changes over the years. His first appearance in Detective Comics #27 was a dark affair with The Batman character being more akin to The Shadow. A hero who wasn’t (and still isn’t) averse to raining death via his twin .45’s onto evil men. Batman was no different at this time. There was no kid sidekick at this time in The Dark Knight’s life. Not only did Batman carry a gun, but was more than willing to use it. But as time went on and Batman received his own title, Robin was introduced and he couldn’t very well go around shooting people with a kid by his side, now could he? 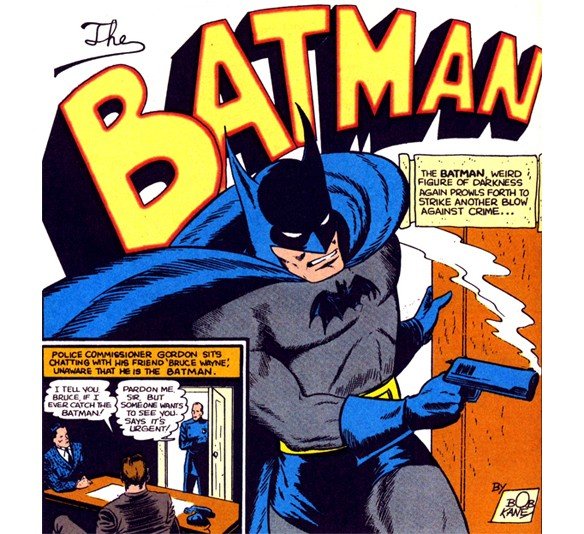 In my opinion, this was the worst thing ever done to to the Batman character. To me, Batman works much better as a loner and creature of the night. And a little circus brat with Robin Hood shoes cartwheeling around him while he dispensed justice just wasn’t my bag. But who knows? The Batman might not be who he is today if things had not gone this way. From those early days, Batman became almost a Dick Tracy type comic, with a Rogues Gallery very similar to Tracy’s. And drawn in That Chester Gould exaggerated style. 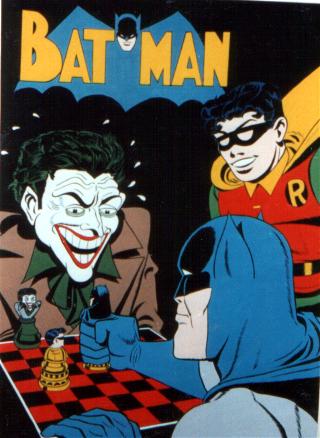 Batman would then go on in the fifties to be a half assed sci fi comic. Even later in the sixties, Bats would go on to reflect the classic Adam West TV show. And then, the seventies brought Neal Adams. A comic artist who drew Batman in a very realistic way and returned The Batman to his roots. Along with Denny O’Neil’s writing, Batman became a fearsome creature of legend once again. His name was once again spoken in whispers by the criminals he pursued.  But along with that, Batman became a detective again. He solved crimes not with fists only, but put his great intellect to work putting clues together to solve cases. 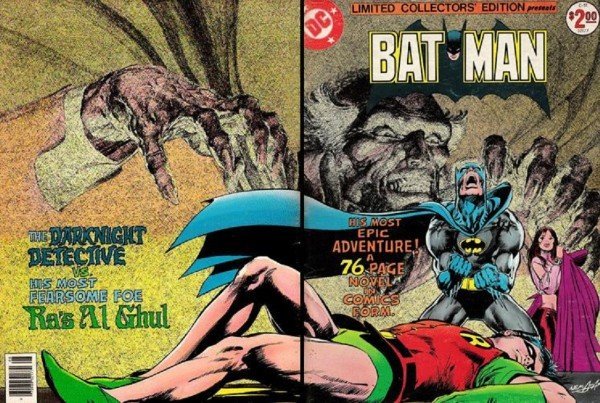 Then came Frank Miller’s  The Dark Knight Returns. To me, this is such a pivotal point in the path of these two icons. This dark look at a tired, older Batman coming out of retirement to save his beloved Gotham once more set the tone for how Batman and Superman would be portrayed for the next 30 years.

That says a lot. There are whole generations of Batman and Superman fans who never knew a Batman that was not influenced by Frank Miller’s Dark Knight.

And I throw Superman in there as well because Miller tore him down to his core also. Both characters were forever changed in the way that can be felt to this day. In movies and comics. A darker tone that writers, artists and filmmakers adopt for their stories.

But that’s ok. Hopefully as I’ve brought to light here, these characters are malleable and adaptable to almost any media. Their stories have been told and passed on from generation to generation just like the legends they are. But are they being told well? That’s the big question. Fans left  The Man of Steel  divided on what Superman would and would not have done. And I will admit there were parts of  The Man of Steel that I absolutely loved, and parts that I didn’t care for. There were things that my concrete idea of what Superman would never do. Zod’s death being one. I didn’t mind that Superman would kill Zod, it’s just the way the filmmaker carried it out.  I won’t go into all that here, but I tried not to let it cloud my opinion of the movie. So, I came away enjoying it for the most part.

A quote from the latest clip for  Superman v Batman: Dawn of Justice gives me a little hope for where Superman is going at least. To paraphrase, Superman says, “Superman’s not real. he’s just a dream of a Kansas farm boy.”   That’s the thing. Superman is the disguise for Clark Kent. Whereas Batman may very well be the dominant persona and Bruce Wayne the disguise.  I would love to see these ideas and themes addressed in depth in the new movies.

I would also like to see how Kal-El deals with the destruction from the last movie. We have a pretty good idea of how Bats will handle it, but we haven’t had many clues on where Superman is with all that yet. Even from  Man of Steel.  This is the thing I hope is addressed in a serious way.

So, I go into this thing with the best of hopes. I’m not going to fret over every little thing they get wrong. And neither should you all. I’ll leave that to the internet. Just have fun seeing these two great American icons in a film together for the first time ever.

Mentioned to you a few months back that the popular V/H/S franchise was going to be making a move to Shudder this fall with a brand new installment titled V/H/S/94 – and today we have the complete panel discussion that was held as a part of this weekends Comic Con@Home festivities. At the end of […]

A Second Trailer Takes Us Deeper Into ‘The Mothman Legacy’

It should come as no surprise that I am here to once again herald the release of yet another film by the talented director – and driving force behind Small Town Monsters – Seth Breedlove. I’ve been following the career of this local filmmaker since his first foray into the woods – and his projects […]

Discovery + Slated To Bring Us The True Story Behind SCREAM

Seems like we’ve been talking a lot about SCREAM – and with good reason, the new film is slated to hit theaters on Jan. 14th so the news has been flying at us at a pretty consistent pace but tonight’s news is a little different. It’s not a secret but there still may be a […]