London Has Fallen is more a new take on John McClane than Olympus Has Fallen was in 2013. Gerard Butler takes the macho-mantle from Bruce Willis and runs with it with a masochistic punch and sizzle. Much like the latter Die Hard  films – that keep on coming, decades later – this film ramps up the danger, the effects and the violence. The biggest difference is how Butler’s Mike Banning gleefully dishes out the pain and brutality. In other words, the terrorists that he encounters in London Has Fallen get far more than they bargained for as Banning nearly single-handedly dispatches them one-by-one – and in some cases, in large groups, just to keep the energy level high. Butler is at his best in this kind of role and seems to be having a great time, it may even be cathartic for him from his expressions on screen. A big plus for the film is his buddy-picture chemistry with co-star Aaron Eckhart who portrays President Benjamin Asher. In fact, there is more chemistry between those two than Butler has with  his on-screen wife Radha Mitchell. All the action, violence and destruction is marred by random dashes of culturally insensitivity and a tiring dependency on the terrorist as the villain out to kill everyone in sight. The highlight of the film from director Babak Njafi is an inspired set piece that feels torn out of the two Indonesian Raid films from Gareth Huw Evans. 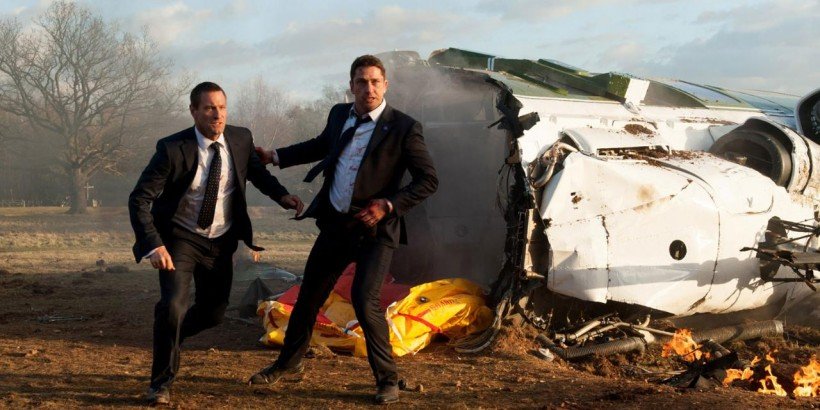 The script for London Has Fallen begins with an air strike on a known terrorist, Aamir Barkawi (Alon Moni Aboutboul) while he is attending the wedding of his daughter with his entire family present. The mission is thought to be a success until Barkawi resurfaces while many of the world’s leaders converge on London to attend the funeral of the British Prime Minister. Included in attendance is US President Benjamin Asher (Aaron Eckhart), the director of the United States Secret Service Lynne Jacobs (Angela Bassett) and Special Agent in charge of the Presidential Protection Division, Mike Banning (Gerard Butler). Before the funeral can begin Barkawi strikes back, leaving London in chaos, many leaders dead and the President on the run. It is up to Mike Banning to protect Asher, keep him alive and take down Barkawi and his terrorist cell. 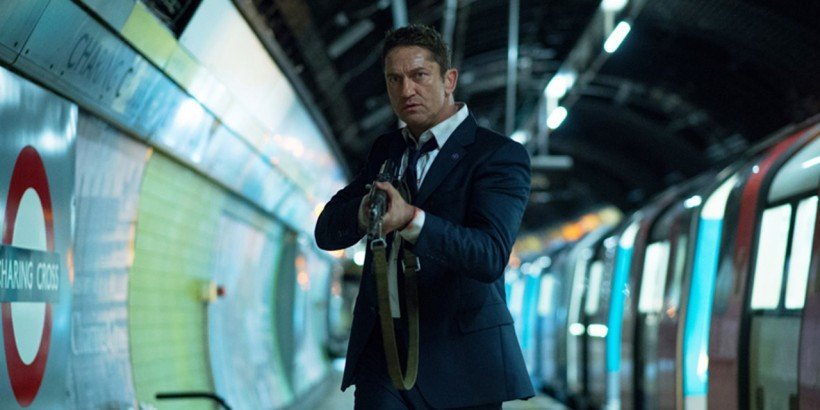 For the most part London Has Fallen is action for action’s sake with just enough plot to drive the hyperactive narrative and provide motivation for characters actions however thin. Much like the Die Hard films or Air Force One with Harrison Ford, this film is primarily a man must protect their charge in peril from a potentially lethal and unstoppable force. In this case, Banning must protect the President from the revenge driven desires of a terrorist. At its core it succeeds at this goal creating a momentum that is thrilling and never boring. However, along the way it treats certain ethnicities and other countries (in the guise of government officials) with a combination of satire and stereotype that is borderline insulting. At times, this becomes cringe-worthy. When the film distances itself from those plot contrivances and focuses on Banning and Asher’s fight for survival, it rises back out of that sludge hole of derivative and thin narrative. London Has Fallen is an action film, to that description, it succeeds marvelously even if it tries a little too hard at times. 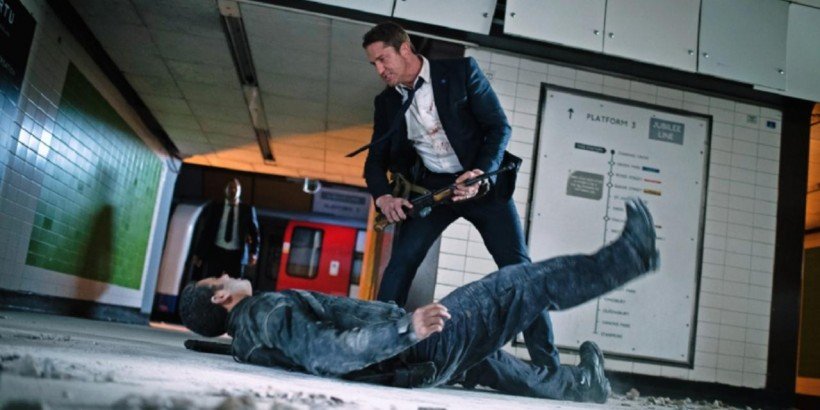 The moment in London Has Fallen that gives the entire film a cause for pause in its entire dismissal is one scene that seemingly comes out of nowhere, feels entirely different than the rest of the film and is executing with style, enthusiasm and skill. It is a scene that will be memorable when all the explosions die down and the rubble settles. Banning, through not fault of his own, has allowed the President to be captured by the terrorist and Asher is now held in their command base in a deserted building in the center of London. Banning, along with the combined forces of Delta team and SAS commandos make a focused assault on the makeshift compound. The scene is edited to play out in one long shot with Butler and the commando extras racing past deadly assassins and oncoming weapon fire. It is quite an amazing feat. And a thrilling one to boot, exciting stuff reminiscent of the exceptional Raid films from Gareth Huw Evans. 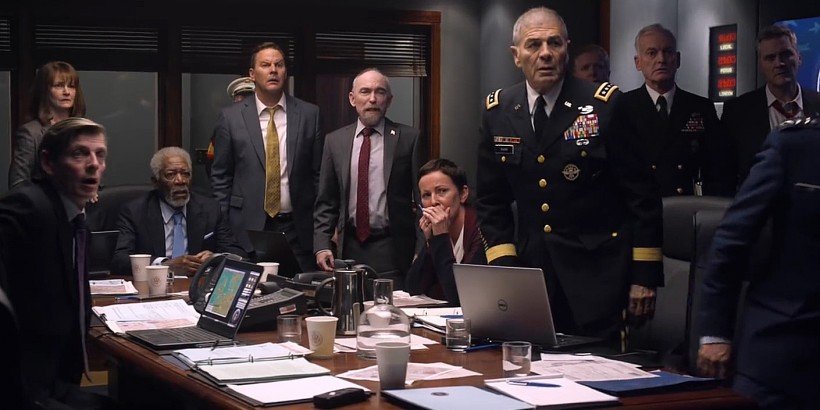 Action, explosions and special effects aside, the best part about London Has Fallen is Gerard Butler, back on his game after the dismal showing in Gods of Egypt. His character is pure cinematic machismo. He is practically a super hero, never tiring, always outsmarting his opponent and completely unstoppable. He is a combination of Captain American, John Wayne and …just a tad… Michael Myers. He is also unapologetic in his brutality. He is a take action guy that is all about getting the job done, humanity be damned. This, combined with the chemistry he has with Aaron Eckhart, makes for a solid central character base for the film as it is easy to get behind these two characters, root for their survival and rally behind their ultimate triumph. There is likely room for more Mike Banning films in the near future. 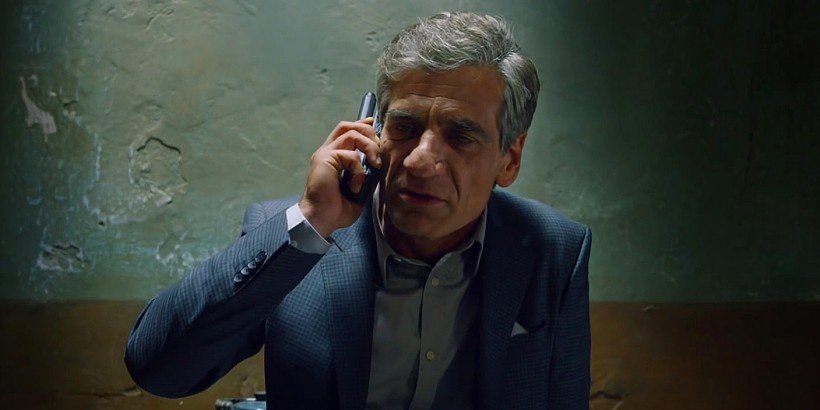 London Has Fallen electrifies the screen with testosterone and rugged male heroics. It reflects the nation’s — and the world’s — fear of terrorism placing the actions from and against it at the forefront of the motivation of the film. For the most part this approach works. Once the film ungracefully slides past the wobbly set up, it boils down to a focused, action-driven survival film where the central hero (Mike Banning) must save his charge (President Asher) from certain death. Guns, explosions and hand-to-hand combat, along with car chases and helicopter theatrics, raise the stakes and keep the momentum racing forward. The film is thrilling and exciting. And it is mindless. The film is driven by the film’s stars Gerard Butler and Aaron Eckhart and is elevated by a solid directorial effort of Babak Njafi. Move aside John McClane, Mike Banning is here to save the day. 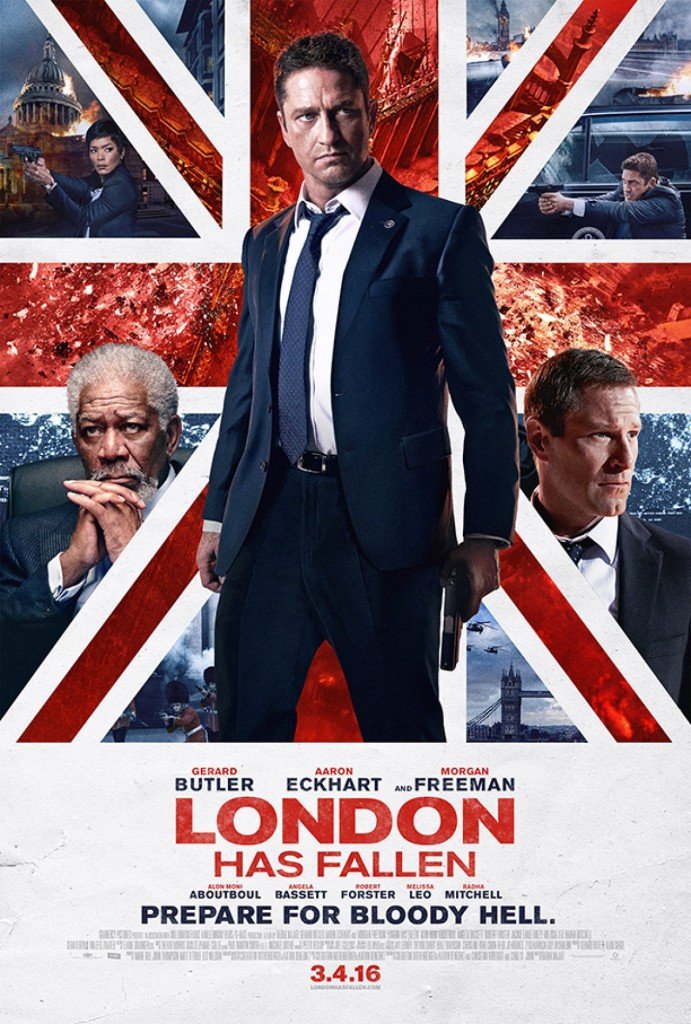 You know that game you played as a kid, on the school playground where you see how long you can hang upside from the jungle gym. You think you were pretty tough for being able to last a couple minutes or more doing that? WELL YOU AREN’T JACK SHIT! Because in Blood Rush (A.K.A. Flipped), […]

“Before I Wake” (2016): Psychological Drama Explores Loss and Grief as Nightmares Come to Life

Viewers seeking outright horror in cowriter/director Mike Flanagan’s third feature film Before I Wake will be disappointed but those who go in realizing that the filmmaker was aiming for something quite different than crowd-pleasing scare fare should find much to appreciate. Shot between Oculus (2013) and Hush (2016), Before I Wake (originally titled Somnia, which […]

Director Patricia Chica’s latest short A Tricky Treat is a horror comedy that manages to pack in a great deal of gooey gore along with some dark humor in its brief running time. As a mother (Andrea Fletcher) works busily in the kitchen, her husband (Steve Brewster) tells her he needs to “go finish that […]