When I was first alerted to the existence of this film (thanks to its trailer), I was dumbstruck with how creepy it all looked. Indeed, The Corpse Of Anna Fritz looked to be one of the most disturbing films I’d ever been exposed to. But upon finally viewing the completed feature, I found myself more dumbstruck at the way the wool had been pulled over my eyes, and how things aren’t really the way they seem to be all of the time. 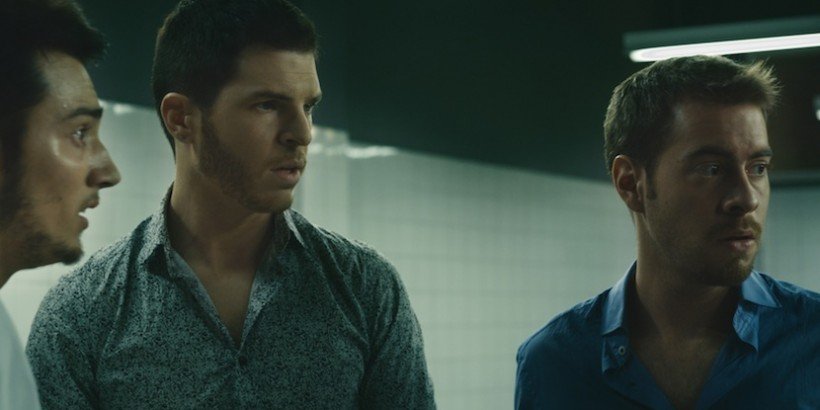 Acclaimed actress Anna Fritz (Albe Ribas) has unexpectedly passed away, and her corpse is lying on a gurney inside of a morgue, awaiting its autopsy. Hospital orderly Pau (Albert Carbo) has just snuck in two of his friends, Javi (Bernat Saumell) and Ivan (Cristian Valencia) to ogle her naked corpse. Pau reveals himself to be something of a necrophiliac when he shows his friends pictures of a female corpse that he claimed to have sex with, and once the trio come upon Anna’s corpse, Ivan immediately begins to fondle her breasts. Of course this leads to Ivan dropping his pants, and mounting Anna’s corpse. After all, Ivan reckons that this will probably be the only chance he’ll ever get to have sex with a famous person, the fact that she’s dead isn’t a deal breaker for him. Once he’s done, Pau decides that he should get a turn mounting Anna’s corpse. Javi is horrified at how sleazy his friends are acting, and wants no part of it, so he waits in another room where he can’t see anything. In the meanwhile, Pau is really having (what he considers to be) a good time thrusting himself into Anna’s corpse. So much so that he doesn’t realize that he’s pushed her body upwards on the gurney, and her head/neck are hanging off of the front. Pau continues, loudly moaning, and thrusting ever harder into Anna’s limp, lifeless body.

And then Anna opens her eyes… 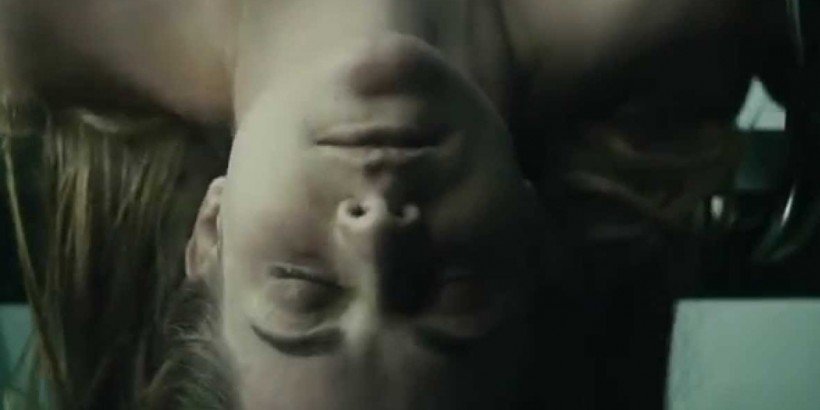 And that’s where the story really begins. But The Corpse Of Anna Fritz doesn’t go where you think it’s headed, and I think it suffers for it. I won’t spoil the film for anyone who might be reading this, but I will say that the film veers from the necrophilia theme that’s so prevalent in its opening minutes, and settles into a groove that’s neither scary, sexy or horrific. The film is essentially a drama with a few thriller elements tossed in. There are only four roles in the film (aside from a few quick walk on roles that come & go quickly), and with a running time of only 69 (!) minutes, there really isn’t a lot of time to develop much by way of characterization. But the actors do their best to keep things moving. 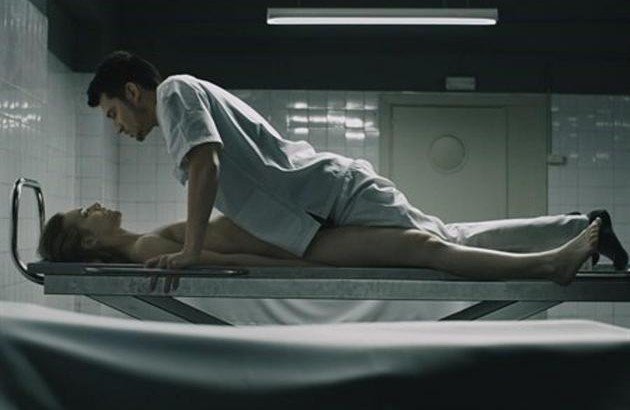 But moving where you ask? Well, once Anna opens her eyes and realizes what was happening, she sorta fades away into the background of the film with her name in the title! From that point on, The Corpse Of Anna Fritz turns into a comedy of errors with the three friends slowly turning on each other after they realize that Pau has locked them into the morgue. Ivan wants to leave poor Anna alone before anyone can discover what happened. Javi (who never touches Anna in any way) disagrees, and ends up nearly beaten to death by Ivan. Pau runs back & forth, trying to figure out how to get out, and none of them pay much attention to Anna, who’s cowering in a corner, asking for help. Every so often, the trio accuse each other of being rapists, necrophiliacs or a combination of the two.

The biggest problems with The Corpse Of Anna Fritz are in it’s premise, which promises a scenario far more macabre than it ends up being, and its characters – who are completely unlikable to begin with. And yes, that includes Anna, who basically falls into the role of the victim pretty quickly. Although she does enact a modicum of revenge in the end, her whiny mewling after she’s resurrected becomes extremely annoying after awhile. The entire film takes place in the morgue, so director Hector Hernandez Vicens paints himself into a corner pretty quickly by keeping everything take place in so centralized a location. But the script (written by Vicens and Issac P. Crues) was written that way, so he has no one to blame but himself & his co-writer for not allowing the film to open itself up to some interesting possibilities had it taken place in a few different locations. But at only 69 (!!) minutes long, there isn’t a lot of time to pursue anything that might add much substance to the film.

The actors perform as well as expected, but there’s a aura of amateurism to their performances as well. Poor Albe Ribas has to suffer the indignity of having to lie naked as two men (Simulate) raping her, and then having to cry for most of the rest of the film. It’s hard to feel sorry for her because she doesn’t really do much to help herself until the end, and by then I honestly didn’t care too much. Films that center on necrophilia aren’t exactly crowd pleasers, but they’re not meant to be, they’re meant to disturb their audience. And to make a film about necrophilia work, the film makers need to be fearless. Take Jorg Buttgereit’s Nekromantik (1987) for instance, it’s filthy, nasty, disturbing and even repellent at times. But it sticks to its premise, and eventually became compelling. The Corpse Of Anna Fritz has a truly creepy central premise that could’ve made for a really disturbing and compelling film, but its creators didn’t have enough faith in that premise, and ended up giving up on the idea that makes the film sound so interesting. In allowing their sense of decency to come forth, they cheated both themselves and their audience out of what could’ve been a genuinely memorable film.

The Corpse Of Anna Fritz 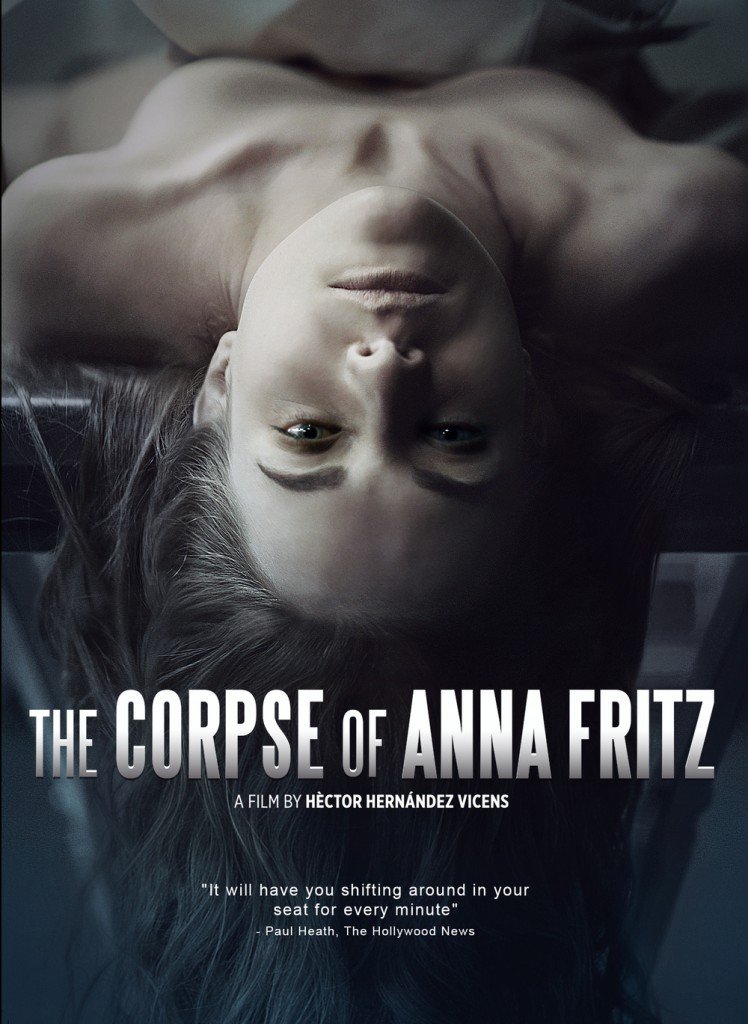 A healthy amount of fear is a good thing. It can help keep one out of dangerous situations and keep one focused. Unreasonable fear, on the other hand, can be a destructive force in one’s life. In director Freddie Francis’ The Creeping Flesh (1973), a man’s excessive fear leads to reckless actions and eventually tragic […]

Fans of the classic 1980s masked slasher icons and those who love laughs with their horror will get a huge kick out of writer/director Shant Hamassian’s short film Night of the Slasher, which plays with well-worn tropes and stands the subgenre on its severed head. As the film opens, Jenelle (Lily Berlina) takes off her […]

Takashi Miike is an oddity, even  within  the Japanese  film industry. Responsible for films like  Audition  and  Ichi The Killer, Miike is known for taking ideas firmly rooted in Japanese culture and twisting them in  the most brazenly bizarre  fashion. Unfortunately, I’m more of  a novice to Miike’s work, but judging from those I have […]