In the recent years, the horror anthology film is seeing a bit of a revival with films such as V/H/S, the ABCs of Death, Trick R Treat and A Christmas Horror Story to name just a few. The team behind the successful V/H/S series of films is now out to scare, fascinate and entertain fans with Southbound. Dropping the found footage angle from V/H/S, Southbound returns to conventional film making, but the stories are just as twisted, intertwining each tale in a Trick R Treat fashion. Larry Fassenden narrates as a DJ as directors Roxanne Benjamin, David Bruckner, Patrick Horvath and Radio Silence tackle themes of revenge and horror with a welcomed Twilight Zone flair. Southbound succeeds more so than many anthology films as a higher percentage of the segments are worth horror fans’ time than most anthology films. The film owes a lot to the extraordinary soundtrack from The Gifted (James Bairian and Louis Castle) which mixes a haunting horror riff with slices of Sci-fi weaved throughout. The pacing is quick, the effects are gruesome, the creature designs are imaginative and the tone is appropriately bleak. “Hold on and don’t ever let go…” the DJ cautions between the first two segments as the film launches into a barrage of horrific and often terrifying sights and sounds, it proves to be an apt warning.

The following review contains minor spoilers, some of which despite leaving major elements unsoiled still may spoil some of the surprises Southbound has in store. 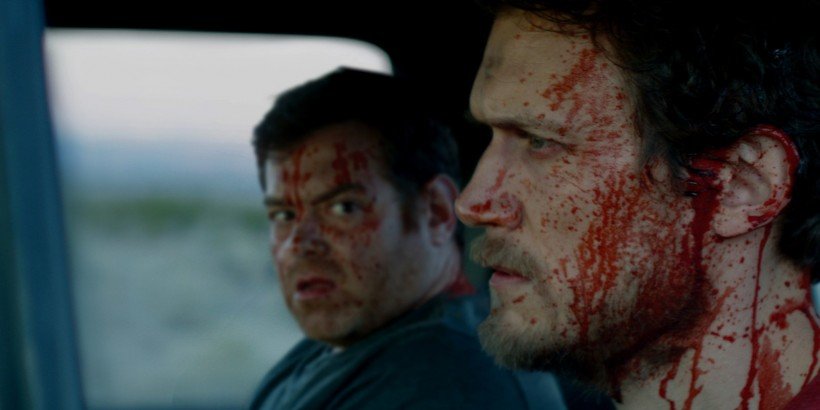 First up is “The Way Out” from Radio Silence (V/H/S, Devil’s Due) and writer Matt Bettineli-Olpin (one of the directors and founding guitarist of Link 80). The story follows a pair of bloodied friends as they stop on at a dive on a lonely stretch of desert road. No clues are provided to what has happened to the two leads but it is revealed very quickly that someone – or something – is watching them. Chad Villella stars as Mitch and writer Bettineli-Olpin co-stars as Jack. The Twilight Zone vibe leaps into the forefront pretty quickly as the more they try to escape, the more they realize there is no escape. Then the creatures are revealed; these creatures are the highlight of the film, imaginative, creepy and angry. And then the story surprises its audience even more. 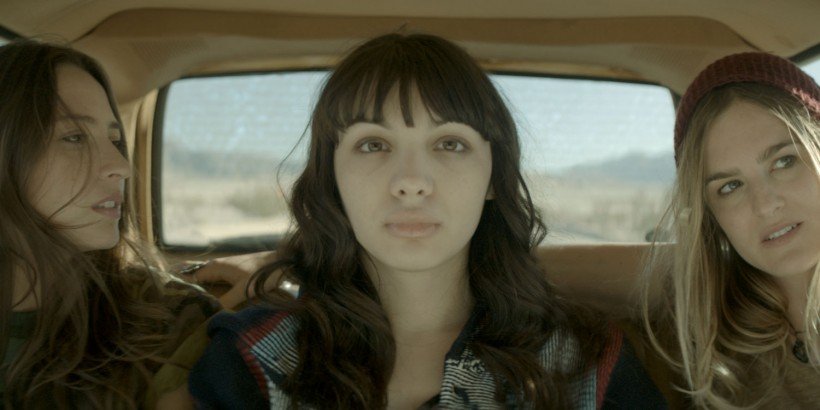 Next up is “Siren” from Roxanne Benjamin and writer Susan Burke. This segment has the strongest emotional core as Sadie (Fabianne Therese) struggles with the lost of band mate Alex in the midst of the strangest act of hospitality ever. Lost on a deserted highway with their van disabled, the all-female band The White Tights (Nathalie Love, Hannah Marks) accepts the offer to stay the night at the home of a couple who stop to help (Susan Burke, Davey Johnson). But, yet, it also manages to do the least with its premise than the other segments. It teases its premise the more the ladies find themselves trapped in their hosts’ not-so-gracious grasp. Unfortunately just as it reaches for its the tension it promises, the damn thing shifts to the next segment. Still, it is good while it is at it, it just has a bitter aftertaste. 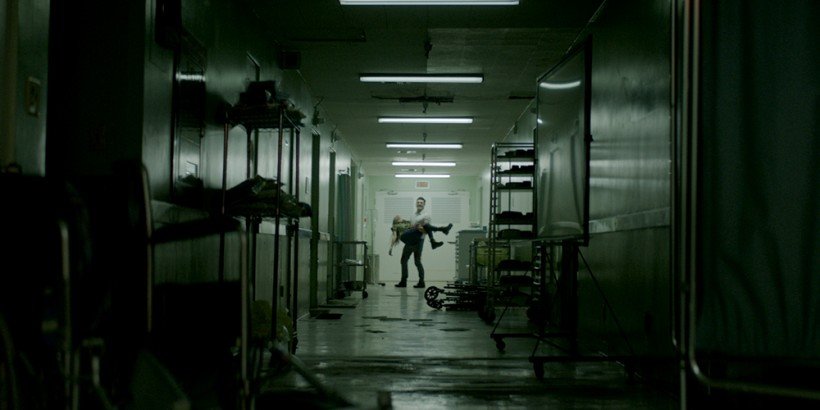 “The Accident” is likely to be the favorite of the group for many as it dives into the most horrific visuals of all the segments. Directed by David Bruckner (V/H/S, The Signal) brings his camera in tight to follow Lucas (Mather Zickel) after he hits a woman on the open road late at night. With no help near, he follows the direction of 911, desperately trying to save the woman’s life. He heads into a deserted town and an equally empty hospital. Dispatch connects him with a surgeon on the phone to operate on the woman with her life hanging in the balance. This segment is intense as the more Lucas helps the worse everything gets for the young woman. Nothing he does seems to help. This segment is white-knuckled exhilarating as the direction, the gore, the acting, the soundtrack and the voice over from the three voices on the phone keep everything elevated and heightened.

The following segment is “Jailbreak” from Patrick Horvath (The Pact 2) and writer Dallas Hallam. The always creepy Maria Olsen, revealed as one of the voices on the 911 call, leads the story into a small bar where she encounters a man searching for his lost sister. The discussions that follow ape an early Quentin Tarantino but on a lower scale. The results are interesting, if flawed, hindered by low-budgeted acting and a confusing visual take on its tale. The bar keep, Al (Matt Peters), is forced to take the gun-toting Danny (David Yow) to the last known location of Danny’s sister Jesse (Tipper Newton). Danny is in for far more than ever bargained as he learns his sister just does not want to be found. The segment is delightfully gory when it chooses to be, but frustratingly decides to become tame when it has the right to go completely bat shit. 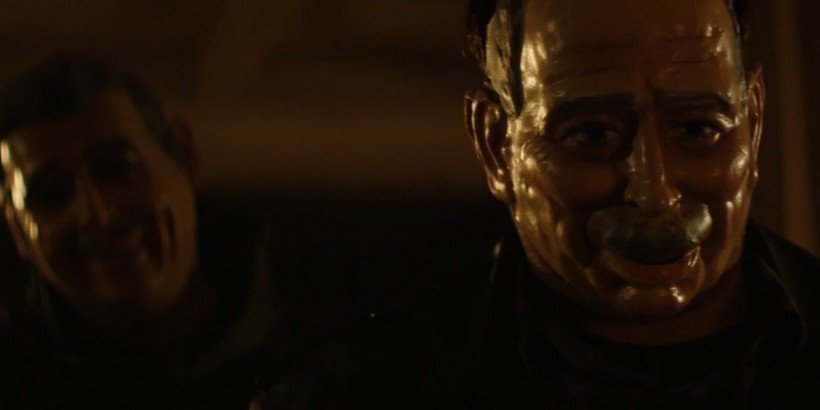 Radio Silence returns for the final segment with “The Way In” in an extended wrap around story. The story takes a stab at upping the ante for the standard home invasion film as three masked men break into a family’s vacation home. The daughter, Gem (Hassie Harrison) quickly jumps to lead status becoming the final girl of the segment, taking a well-timed swing at eliminating one of the intruders. But, the other two are a little more prepared. Then, the segment takes a fascinating twist improving on its well worn story as the victims have a few surprises in store for the remaining two attackers. Then, much like Radio Silence’s favorite from V/H/S, “10/31/98”, the directors exhibit their frenetic pacing, camera angles and style. The segment livens up to a terrific conclusion with Southbound landing on its feet. 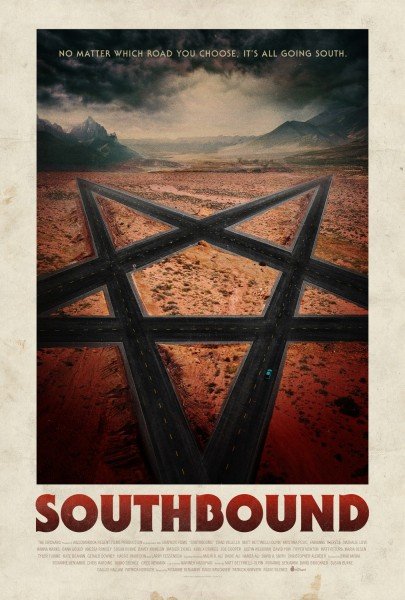 Southbound delivers the gore, the shocks and the strange Twilight Zone infused stories that will likely satisfy most horror fans. The soundtrack is exceptional as is the sound design throughout. The biggest problem – a crippling problem in some respects – is the lack of resolution for most of the stories, they lack purpose and motivation. They exist simply to be creepy, horroric and weird, to that extent the film succeeds. It’s one hell of a ride! The creative manner in which the film ties its segments together and handles its wrap around stories, “The Way Out” and “The Way In”, create an interesting circular endless cycle to the film that is fascinating in its execution and implication. “In the End, we’re all just trying to find our way home. Right?” asks Fessenden, the DJ. Southbound suggests no one ever finds their way home.

Wanna see something really scary? Then let’s March right into another month of classic terrors guaranteed to sabotage your sleep. Read on as Gruesome continues its regular survey to see what fright flicks left today’s genre practitioners Scarred for Life! Sam Walker, writer/director (The Seed, premiering on Shudder March 10) “An American Werewolf in London […]

As we all struggle through this year – and through the personal and financial struggles that COVID has brought with it, more than ever we need something to take our minds off the real-life horrors going on around us – and Universal Pictures and Blumhouse are happy to oblige with the fun as hell body-swap […]

Jeff Sinasac has an impressive string of credits as an actor, and with the Canadian independent horror film Red Spring, he offers an accomplished debut as a feature-film writer and director, as well. He takes some tried-and-true scare fare elements and puts enough original spins and, more importantly, heart into the movie to deliver a […]