Despite its comedic sounding title, Landmine Goes Click is anything but funny. Director Levan Bakhia has taken that odd sounding title, and created a genuinely serious and thought provoking thriller that doesn’t allow much down time for an audience to catch its collective breath. Unfortunately, in the end that works against it, but let’s get to that later. Three friends, Daniel (Dean Geyer), his fiancee, Alicia (Spencer Locke), and their best friend, Chris (Sterling Knight) are driving through the Georgian mountains in Russia when they decide to get out of their jeep, and start hiking with their end goal being camping out overnight in a picturesque spot. During their hike, Daniel asks Chris to perform an impromptu marriage ceremony. It wouldn’t be binding of course, but Daniel insists that Chris perform the ceremony. Chris is a bit reluctant because he and Alicia gave in to their mutual attraction and had a one time fling not too long prior. Chris wants to come clean, and tell Daniel, but Alicia is vehemently against telling Daniel anything. 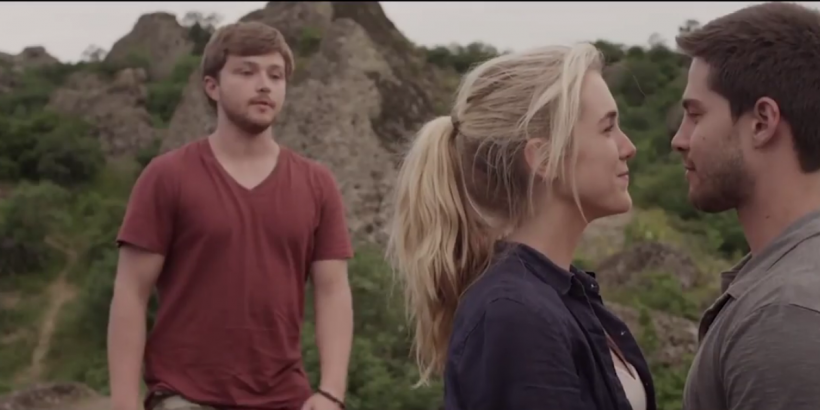 After spending the night on a hilltop, they are joined by park ranger Devi (Giorgi Tsaava), whose been asked by Daniel to take some pictures of the trio. As Devi asks the trio to shift to their left, Chris accidentally steps on a landmine. He’s instructed by Devi to remain standing exactly where he is, without moving the foot that’s on the mine as he runs to get help. But Devi estimates that it’ll be about four hours before help can come. After Devi leaves, Daniel reveals to Chris and Alicia, that he’s known about their fling the entire time, and that he’s planted the very landmine under Chris’ foot. After repeatedly calling Alicia a whore, Daniel throws a shovel at her feet with instructions to dig a ditch next to Chris. He tells them that if they’re lucky (and the ditch is deep enough), maybe Chris can jump into the hole before the landmine explodes. He then leaves them there, catching up with Devi (who’s been watching them from afar the whole time). Devi asks if they should go tell them that it’s a hoax, but Daniel rejects that plan, opting instead to go into town and get drunk.

As Alicia starts to dig a hole for Chris to jump into, a hunter, Ilya (Kote Tolordava) happens upon them, and offers to help them. But Ilya quickly surmises that this is a situation he can take full advantage of. He finds a very pretty young lady and her male friend totally unable to help her a situation too ripe for him to pass up. So Ilya (along with his dog) decides to play a “game” with the helpless duo. A game that quickly degenerates into sadism & assault, and ends with Alicia’s rape and death. 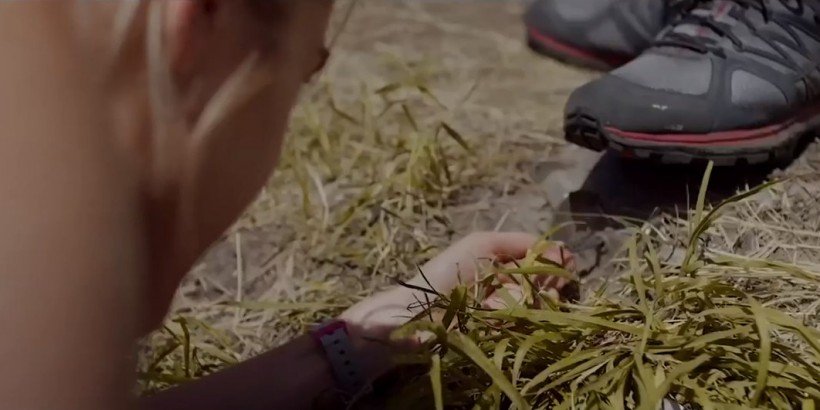 After a slow fade out of Chris holding Alicia’s lifeless body, the film jumps forward to an unspecified point in the near future. The audience is now in Ilya’s home, and we discover that he’s a beekeeper, with a modest home and a wife, (Nana Kiknadze), and a teenage daughter, (Elene Bezarashvili). Mother and daughter are preparing dinner when an American stops to ask for directions. After a short discussion, the American gets himself invited to sit and have some dinner with the family. Of course, the American is Chris, and once Ilya comes home, he immediately recognizes the danger his family is in. But how can he get rid of Chris without having his family find out what he’s done? And what does Chris have planned for Ilya?

Landmine Goes Click is split into two distinct sections, but each one of them have the same intent. The first section deals with Chris, Alicia, Ilya and the mine. The second featuring Chris, Ilya and his family. Both of them take sadistic and violent turns, with Chris turning the tables on Ilya and his family in the second section. There are moments in the film where the tension is as thick as crimson colored molasses. Indeed, the tension becomes near overwhelming at times, which is testament to Adrian Colussi’s taut script. But director Bakhia makes a critical error in having each section last far longer than it should. The scenes of Ilya taunting Chris/Alicia go on for so long that they begin to lose their effectiveness. The same goes for scenes featuring Chris slowly taunting/torturing Ilya and his family. It just goes on for far too long. The film feels a lot longer than its reputed 110 minute running time. 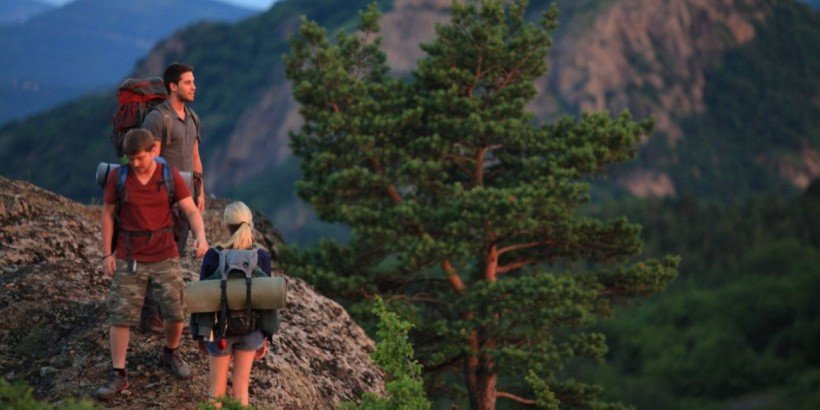 But the actors really put their all into their roles. Geyer isn’t in the film for more than 10-12 minutes, but his anger towards Alicia and Chris is palpable. Both Locke and Knight imbue a genuine sense of helplessness, frustration and anger into their roles, but it’s Tolordava that steals the movie. He looks like a Russian version of porn star Ron Jeremy, but he’s a far better actor than Jeremy could ever be. He manages to make Ilya both callous and pitiable during the course of the film which really isn’t all that easy to do – especially after his abusive acts during the first half of the film. Sadly, Mr. Tolordava died earlier this year at the age of 35. The cinematography (by Vigen Vartanov) captures the beauty of both the Georgian mountains, and the rural neighborhood where Ilya and his family lives.

As I mentioned earlier, the sheer length of the torture scenes becomes problematic after awhile. If Bakhia’s idea was to make his audience uncomfortable then he succeeded. But he accomplishes that pretty quickly, and then forgets to shut off his camera. The scenes of the “game” seem to go on forever, and the same goes for the scenes with Chris returning to turn the table on Ilya, they just go on forever. This insistence on stretching these scenes far past their point of efficacy slows the film down tremendously. Mind you, they are extremely effective for awhile though, I guarantee that most of you will be sitting at the edge of your seat, yelling at the screen during sections of Landmine Goes Click. But after you realize that they last longer than they should, you might just sit back in your seat and doze off. 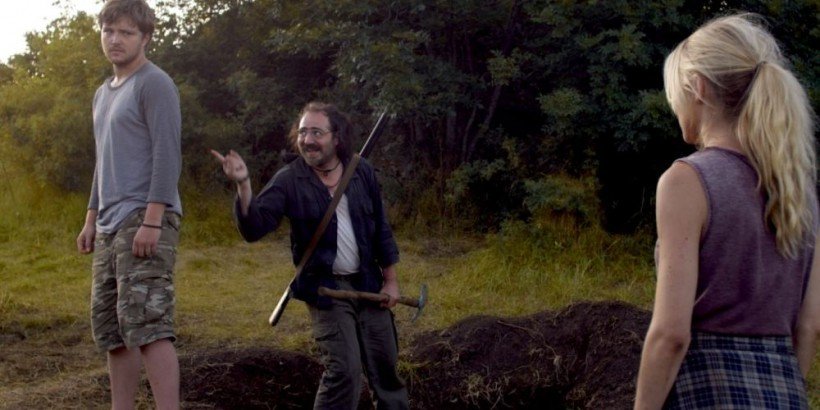 Ultimately, I decided that Landmine Goes Click succeeds more than it disappoints. Like I said, the tension during some of the scenes is as thick as the walls of Fort Knox, and you’ll find yourself holding your breath without even realizing it. The length of these scenes will put off many, but I didn’t find them to be deal breakers. Actually, I think Landmine Goes Click is one of the best films of the year. It won the “Best Film” award at this year’s NYC Horror Film Festival for a reason. It might not fit into the space where one would find more traditional horror films, but a film doesn’t need to feature some mythical beastie to be called a horror film, does it?. Horror…true horror, can be found in the most mundane of places. Or the most beautiful ones, like the Georgian Mountains. 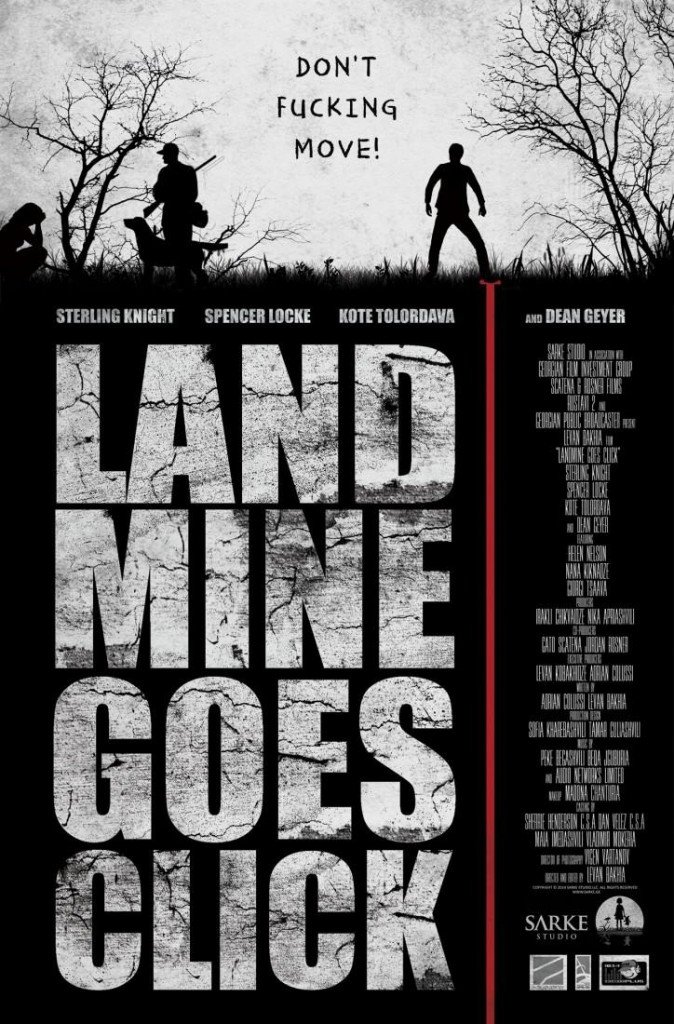 “They Look Like People” (2015): Horrors of the Mind Test the Bonds of a Friendship

Two long-time friends are haunted by voices with quite different messages in writer/director/editor/cinematographer/production designer Perry Blackshear’s mesmerizing psychological chiller They Look Like People. Christian (Evan Dumouchel) listens to motivational recordings from someone important to his past, while Wyatt (MacLeod Andrews) is plagued by late-night phone calls instructing him how to protect himself against monsters that […]

After hearing so much about Hellions, the latest film from director Bruce McDonald (Pontypool), I found myself totally stoked to sit down and experience what I hoped would be a really good movie. But what I watched was neither very good or very bad, it sat uncomfortably in cinematic purgatory, where polarizing flicks retire to […]

Perhaps better known as a novelist, S. Craig Zahler ia an award-winning writer with novels like A Congregation Of Jackals (2010) and Wraiths of the Broken Land (2013), among others, to his credit. He’s also known as Czar, the singer/lyricist/drummer for a heavy metal band called Realmbuilder  and he performed the same duties earlier in […]