Ash vs the Evil Dead  is essentially a solid counter to the stoic seriousness of  The Walking Dead. I’m not going to go into too much detail about my thoughts on that show since 1) that’s  JJ Fitt’s  job on the site and 2) those who listen to Horror News Radio are probably well aware of my love/hate relationship with that show. However, there are certain similarities within  “Fire in the Hole”  to that series, with the main conflict centered around some heavily armed Doomsday preppers in a very woodland area. Plus, much like this recent season of  The Walking Dead, there’s a  disappointing and underwritten romantic tinge found here. But we’ll get to that.

In the meantime, we find Ash, Kelly, Pablo and new recruit Amanda wandering through the woods to find out about the militia that Ash’s old buddy Lem mentioned in last week’s “The Killer of Killers.” There’s some fun banter here about Kelly wanting a flame thrower and Ash questioning her ability to wield it when suddenly they come upon a bleeding militia member and his torn in half buddy. As the living one begs for help, the other militia members hop out of the bushes and kill the poor guy  thinking he’s “one of them.” Turns out they’ve had experiences with Deadites via Lem, who became possessed at the end of last week’s episode. This scenario is another fine example of how Ash vs the Evil Dead  integrates Deadites into a modern setting, with the situation of these doomsday preppers thinking it involves the government releasing a virus that turns people into superhuman killers.  It sounds potentially cliche, but a solid start for conflict that leads to extensive carnage. 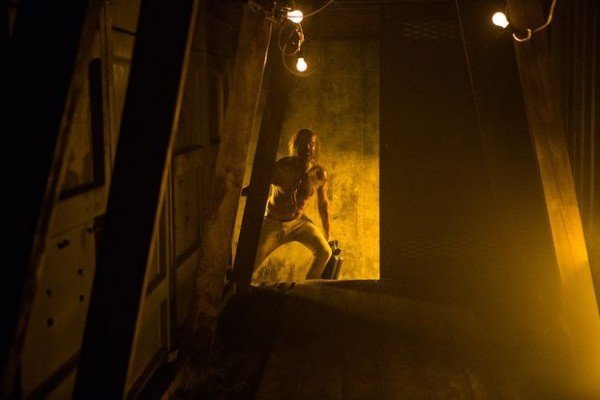 Lem and his militia buddies may not make for the most developed  characters, but they serve as some extensive canon fodder or, in Lem’s case, a genuinely intimidating villain. The paranoia within that group sells itself as a powerful secondary threat, as Pablo and Kelly try to fight of Deadites on their own while Ash and Amanda are directly being targeted by Lem. The Pablo and Kelly stuff is some of the best of character building elements of the episode. It shows these characters being a bit more vulnerable in their motives, both in a sillier fashion with Pablo’s desire to find a weapon to distinguish himself and Kelly getting that chance to act on her desire for revenge. Not only does this progress the characters, but it also gives us one of the best kills of the season, in which Kelly runs over a possessed gas mask wearing  militia soldier  and eventually guns him down into a mist of blood while Pablo is grabbed by the Deadite. It has just that right mixture of physical comedy and gore galore that makes  Ash vs the Evil Dead  so fun, while actually progressing the characters.

Then… we have the stuff that involves our titular character and Amanda. Mind you, the gore here isn’t the problem at all. In fact, the gore here is also some of the best stuff Ash vs the Evil Dead  has done with splatter so far. Lem is even a fantastic example of how to pull off a head Deadite villain, with a definitive personality that plays on Ash’s memories and some awesome fire breathing techniques. Plus, his take down by Ash & Amanda serves as a one of the more elaborate and well choreographed take downs in the entire  Evil Dead  series. We even get a brief glimpse at Lucy Lawless rising from her presumed fiery end, as Amanda details their journey together. Note that Lawless is completely nude, not uncommon for Lawless or Starz given her work on  Spartacus. Yet it’s not exploitative, allowing Ruby to show a sense of dominance and control over herself even in a vulnerable state.

No, the real problem here is  that Ash and Amanda spend most of their time in the episode building up a romantic connection. A connection that, based on the previous episode, was merely rooted in a sexual desire on Ash’s part and confused disgust from Amanda. It’s not that I’m necessarily against these two having some sort of flirtatious chemistry in theory, but in practice it’s extremely rushed. The two go from relating to the idea of loved ones being taken by Deadites to nearly kissing after destroying Lem. It not only undersells the romance, but it really undersells Amanda as a potential character. This strong no-nonsense cop suddenly falling for Ash merely because he can kill Deadites and has a past with them seems to be underselling the strength of her character. When Ruby made her case for “going with the flow” a few episodes ago, it seemed to indicate a desire to let loose logical hang ups for the sake of improvising. Now, it seems like that going with the flow is embracing a romance that’s barely there. I don’t even get much of a romantic chemistry at all between Bruce Campbell and Jill Marie Jones, who have more of a buddy cop aesthetic to them before the romance attempts to blossom. Hopefully they do something else with her character beyond this, but given the track record of this show and her, I doubt it.

After successfully destroying Lem, our heroes meet back up to collect a few weapons, free the remaining militia members from their bounds and  kill a remaining Deadite before heading out to the original cabin. Pablo, Kelly and Amanda seem excited, but Ash looks a bit blue. As they attempt to leave, Ash looks at his compadres and gives them a rare vulnerable moment to admit he really cares about them. Pablo, Kelly and Amanda find this sweet, celebrating their oncoming journey with each other before suddenly realizing that Ash has scurried off to his car in order to keep them from the danger that lies within his destination. Said destination? The original cabin, which we cut to as Ash’ severed hand scurries into from and heads towards the door. So it’s clear  Ash vs the Evil Dead  has a reverence for the past. Let’s hope the final three episodes of the season can give us a bit more of willingness to progress to the future.

Kill of the Night:  Gas mask Deadite by Kelly gunning.

Best Ash Line:  “That was before I knew it was racist. That was a long time ago,” in reference to Lem’s recollection of his “fire water” comment. Once again, love the modern clashes of taste with Ash.

Next Week on Ash vs the Evil Dead:  “Ashes to Ashes” in which Ash returns to the cabin that started it all.

One More Thing:  One of the militia guys is played by the lead actor from this year’s  Deathgasm. If you’re a fan of the Sam Raimi style combination of creative gore and bizarre humor, that’s one worth seeking out.

The first season is officially half way over. Perhaps I should say the only season is halfway over, but that  would  be wishful thinking. I tried to like this show, really I did. I even thought that episode two stepped it up a bit; however, any progress made in episode two digressed majorly in episode […]

Preacher, one of the most celebrated comic book series of the late 20th/early 21st century, is hard to adapt. For years, there have been feeble attempts to capture the 66 issue series (not including one shots or a Saint of All Killers mini-seires) by acclaimed author Garth Ennis, from the likes of a film produced […]

Howdy all you Grue-believers! I’m leaving for Nashville shortly after writing this, so I figured I’d try some southern hospitality on y’all! Speaking of “hospitality”, we all saw last week what the hospitality staff at the Rosarito Beach Hotel was like….let’s just say they were less than caring of guest’s needs. As all of you […]