Before I get started, let me say that the trailer for this film doesn’t do it justice. Suspension is a production of Suspended Reality Inc. and, considering the story the film tells, the company couldn’t have a better name. The plot contains  two parallel and alternating threads for a little over half of the film. But rather than merge, they begin to intertwine like a double helix to the point where you can’t tell one from the other.

The opening scene of Suspension is of two people driving up to a barn, removing a man from their van, and taking him into the barn. All the colors in the scene are muted except red which is extraordinarily vivid. We then see a masked woman who appears to be hosting the videotaping of a nasty online show. She introduces the video by saying, “Welcome back to the nuthouse you motherfuckers!” She then proceeds to introduce their very special guest, who 10 years ago to the day, bludgeoned eight people to death with a hammer, including his own son. Their captive, who is kept in a small wire cage, is not being cooperative, so the host screams for the Taser from her cameraman. When she turns around, somehow their captive has escaped the wire cage and is nowhere to be seen. The host and her cameraman are soon murdered by their ex-captive, who leaves the host hanging on a meat hook and confiscates her mask for his own use. 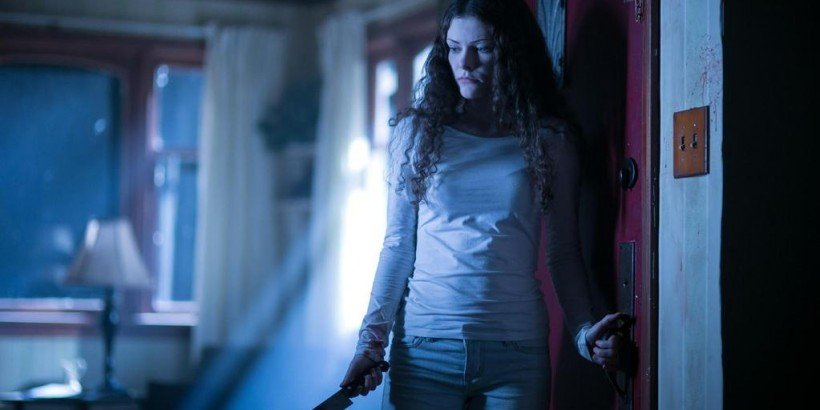 Now cut to a girl completing a black and red ink drawing of the scene we just left, vivid reds and all. So, now I’m wondering, was there really a murder or was it just the artist’s imagination? The artist is a high school student named Emily (Ellen MacNevin) and she’s been caught making these gruesome sketches in class. Her teacher, Mrs. Miller (Chilton Crane), flips through Emily’s sketchbook, which looks like a two color graphic novel of sorts, and tells Emily that her drawings are very disturbing and that she should draw something more along the lines of Jesus Christ, her lord and savior, or she would surely end up rotting in hell. Emily argues that they’re just drawings and that drawing them is very helpful to her.

In the school hallway, Emily meets her friend Carrie (Taylor Russell) who is excited about going to Frank’s (Rustin Gresiuk) party that night and wants Emily to come too. Emily is a little irritated by the invitation and tells her that Carrie knows she can’t go because she has to watch her little brother, Jeremy (Owen & Connor Fielding). Carrie responds that it’s weird how Emily is talking about Jeremy lately. 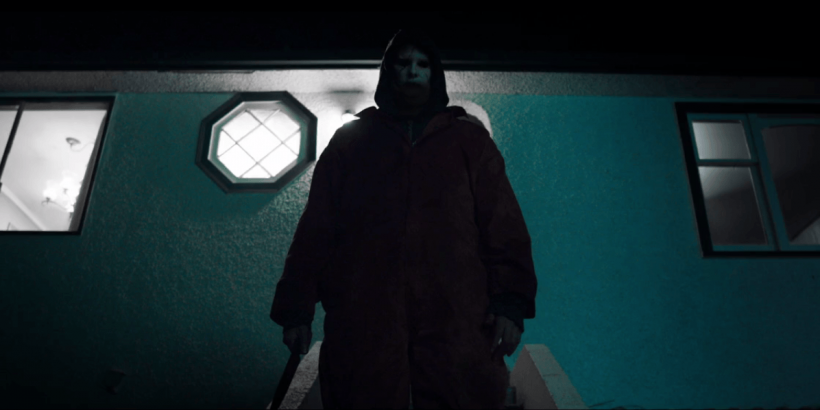 The queen bitch of the school, Theresa (Courtney Paige Theroux), is mad because her boyfriend, Jason (Steve Richmond), is sympathetic towards Emily. So she and her ring of followers manipulate Emily into the bathroom where they video themselves pushing her head into the toilet until she finally agrees to repeat, “I’m a crazy bitch, I’m a crazy bitch.” Once their mission is accomplished, they leave Emily alone in the bathroom. She manages to clean herself up and then leave the school. While waiting for her mother to pick her up, Emily sees her friend, Carrie, getting a ride from Theresa and friends, figuratively stabbing Emily in the back. Emily’s mother never shows up to pick her up so the Sheriff (Duncan Ollerenshaw) gives her a ride home.

As soon as Emily is home, her mother is called in to work. She apologizes to Emily for leaving her alone on this, of all days, but Emily assures her, “We’ll be fine.” Once her mother leaves, Emily asks Jeremy what he wants to do and he runs to get her sketchbook and brings it back to her. Emily asks him, “Are you sure you want more of the story? It’s going to get a lot worse!” But Jeremy persists, so Emily starts sketching and we go back to the world of the muted palette with vivid reds. 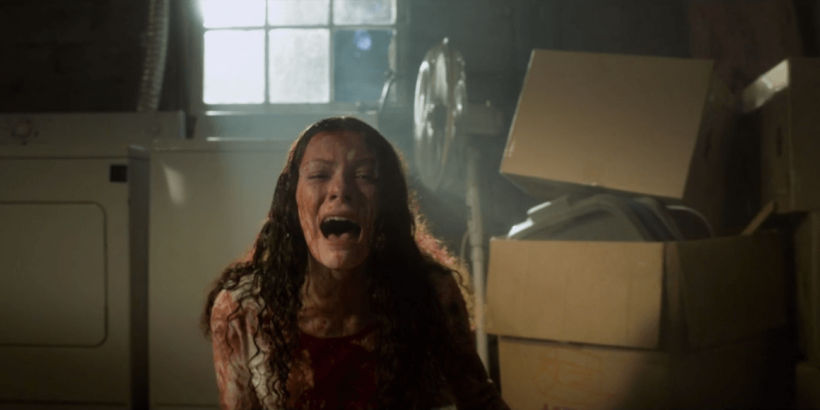 This time, the sheriff and his deputy are at the red barn investigating the murders of the photographer and the online host. As this story thread is moved forward, its graphic novel world is frequently interrupted — a pencil breaks, the phone rings, there’s a knock at the door — and the story switches back to the reality thread as the activities of Theresa, Frank, Carrie, and Jason slowly move them towards Emily’s house. Periodically, Emily goes back to her sketchbook and as she begins to draw, we switch back to the muted palette of the graphic novel world with the vivid reds.

As both stories progress, it becomes harder and harder to tell what’s real and what is Emily’s imagination. The two threads interweave, combine, and twist around each other, confusing both the viewer and Emily. As I tried to find cues, visual or otherwise, that would tell me whether or not what I was seeing was in the real or the sketchbook worlds, I realized there was a third thread that depicted Emily’s descent into madness. This was not the world as it was seen in reality or the world of the sketchbook, but the world of the dark imaginings and delusions of Emily’s damaged psyche. Throughout the film, I counted 10 present day murders, but I wasn’t sure who had really been killed until the final scene of the film. 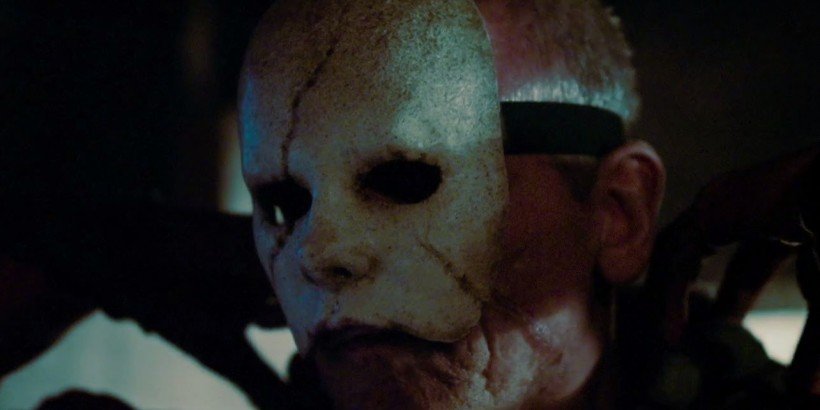 Suspension  is directed by Jeffery Scott Lando, most of whose previous work is on TV movies, most recently Roboshark (2015). The screenplay is written by Kevin Mosley whose only other credited screenplay is Savage Island (2004), also directed by Lando. Mosley and Lando, along with Director of Photography Shawn Seifert, do  an excellent job of telling a complex story on a low budget while still making it look good. And I would be remiss if I didn’t  identify Devin Rosychuk as the artist who created the effective artwork  in Emily’s sketchbook.

The lullaby, “Pretty Little Horse,” is heard three times during the film in different versions. What was most interesting, was a variation on the lyrics. The original lullaby contained the line, “Birds and the butterflies, flutter ‘round his eyes, poor little baby crying Mama.” One version in the film has Emily singing, “Birds and the butterflies, pecking out his eyes,” as she lies next to Jeremy in bed. In the version played over the end credits sung by Harris Van Berkel, the line becomes, “Buzzards and flies, pecking out his eyes, poor little baby crying Mama,” which is a very disturbing lyric indeed, especially for a lullaby. 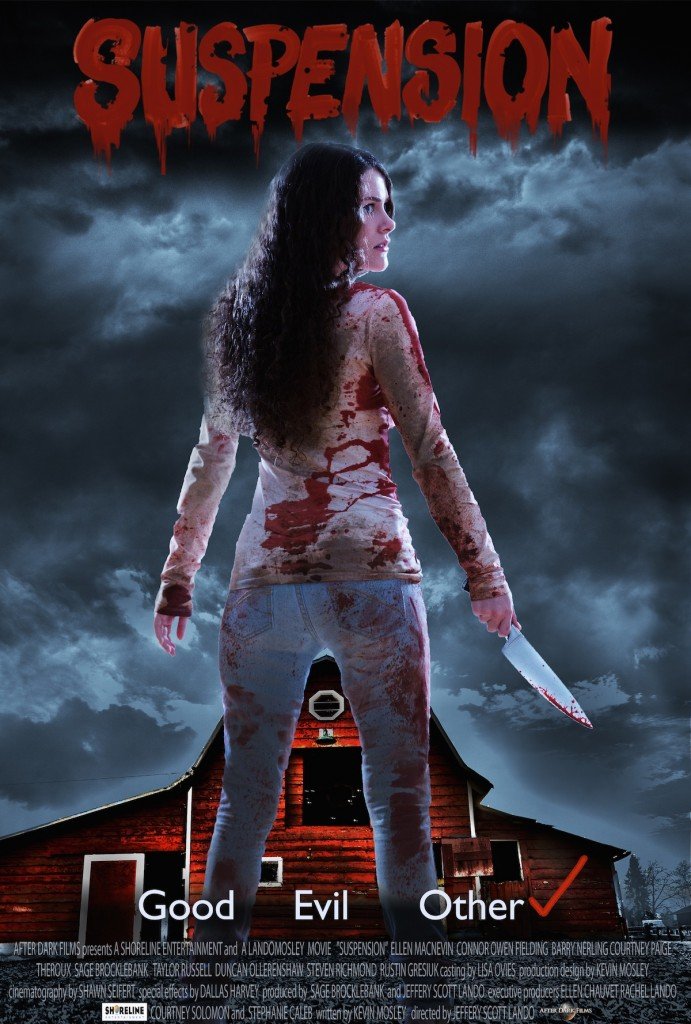 The actors in Suspension excelled as well. Ellen MacNevin, in her first feature, does an excellent job portraying Emily’s descent into madness. You may remember Duncan Ollerenshaw, who plays the sheriff, as Mr.Toole from the A&E series Hell on Wheels. His deputy is played by Sage Brocklebank, who played McNab on the USA network series Psyched. They both did a good job playing to the dichotomy of their roles, their graphic novel caricatures versus their reality based characters. Genre fans may recognize Taylor Russell (as Carrie), from her stint on the TNT science fiction series, Falling Skies. Finally, I can’t stop without mentioning Courtney Paige Theroux as Theresa. No one ever played a more demanding and narcissistic queen bitch.

My one hesitation in recommending Suspension, is that at first viewing, I was really irritated with what seemed to be clues that were inconsistent with plot developments. However, once I recognized that there was a third plot thread, all the clues came together.

I seem to keep saying this about the films I review (Hellions is one example), but if you like stories to move logically from point A to point B, you might want to stay away from this film. Suspension really is a twisted mother of a story. However, I was impressed with the look of the film and with the filmmakers’ ability to tell the multi-premised story in a way that, in hindsight, was perfectly consistent.

One of the things I truly hate about film trailers is the tendency to label the director “Visionary”. The trailers for A Cure For Wellness start off with the […]

On episode 491 of Horror News Radio: The Grue-Crew review… X (2022, A24). Warning: possible spoilers after the initial impressions! Be sure to subscribe to the Gruesome Magazine YouTube channel […]