A lot of you might not know that I’m a film festival judge, and I’ve been one for a few years now. You might be thinking that watching films for a living is a great gig, but it can be an extremely long  haul. Although I’m currently affiliated with the famed New York City Horror Film Festival, I’ve been a judge for a few different fests. I estimate that this year alone, I’ve watched well over 100 feature films, and about 120 shorts (and this was just for the NYC festival). All this is in addition to what I’ve watched for the websites that I write for, so believe me when I say that I watch a LOT of movies people. The reason why I’m mentioning this is to point out how special I think the movie I’m about to review, Dead Body, is. It really isn’t easy to stand out when you’re just one film being watched by five judges who’ve already seen dozens of others before they get to you. But Dead Body really did stand out, and it did so because it’s a damned fine example of what a low budget film can achieve with the right people both in front and behind the camera.

The set up for Dead Body is a simple one. Nine high school kids go to celebrate their graduation at a secluded cabin in the woods. The trip is filled with laughs, drugs, sex and most every other debauchery they can think of. Eventually, the party dies down and in an attempt to find something new to do they decide to play a game called Dead Body. For those of you unfamiliar with the game, it goes like this: One of the players is the killer, and he/she has to find the other survivors who are hiding from him. But there’s also a victim hidden away somewhere, and once the victim is discovered, the survivors must try to figure out who murdered him/her. But as the game proceeds, the players find a real dead body, it turns out that one of them is actually killing the others. Now, as the survivors try to figure out which one of them is a killer, they become suspicious of each other. Meanwhile, the killer is knocking them off one at a time…

The similarity to the many film versions of “Ten Little Indians” are obvious, but Dead Body does an extremely nifty job of standing out from the crowd by refusing to pander to its audience. This isn’t a silly, stupid little slasher film. It’s a smart, exciting and bloody thriller that manages to keep its audience on the edge of their seats while giving them a knowing wink at them at the same time. Director Bobbin Ramsey works some serious wonders with her cast of unknowns, and she has the confidence to allow her actors to really get into their characters motivations. There’s a sense of freedom to their actions and no one in the cast seems hampered by Ramsey’s directorial style. Perhaps it’s because of the captivating script from Ramon Isao and Ian Bell that makes the characterizations feel so fresh and engaging. More likely it’s a combination of a smart script, steady direction and an outstanding cast that makes Dead Body work so well.

Rachel Brun plays Ilsa, the not so standard final girl of the film. I call her “Not so standard” because unlike most final girls we see in horror films, Brun gives Ilsa a real sense of vulnerability. You get the sense that she really wouldn’t know what to do if she was the last person standing, and that’s refreshing. The cast is filled with the standard archetypes that most, if not all of us are familiar with. Leah Pfenning plays the best friend role with a smarmy air of cynicism, Cooper Hopkins is the protective one, Spencer Hamp plays the lonesome nice guy, Jay Myers is the cynical perfectionist, Nathan Pringle plays the stoner, Nic Morden plays the outcast, Miho Aizawa and Koe Sakuta are the two exchange students. Some of the roles are bigger than the others obviously (Aizawa & Sakuta are pretty much the Red Shirts from the outset), but everyone in the cast imbues their characters with real honesty and emotion. In other words, they aren’t your standard cookie cutter characters that you’d find in any number of slasher films. You’ll end up caring for all of them, not just one or two – and that’s quite unique for this kind of film. And as it proceeds, there’s a genuine sense of unease, because the characters begin to suspect each other of being the killer. The paranoia level grows exponentially as bodies keep hitting the ground, and the audience is drawn into the mystery of it all, and it’s a lot of fun trying to figure out who the killer is. The only other genre film I can compare it with in that aspect is John Carpenter’s The Thing (1980), which reveled in the paranoia that was created by the situation it presented to its characters. 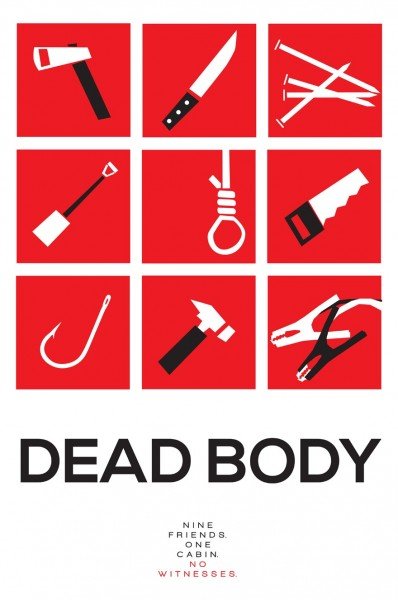 But making Dead Body even more spectacular to watch are the kill scenes, which are brutal, intense and bloody. Shane Saucedo makes the entire enterprise a really gruesome affair, and kudos to director Ramsey for not shying away from the mayhem. Topping it all off, is the wonderfully adept look of the film, and credit for that goes to cinematographer Anthony J. Rickert Epstein, who gives the film a sleek, clean & eerie veneer. Quite frankly, there’s very little wrong with Dead Body, the script is smart, with some great lines that’ll make you laugh out loud. Towards the end, when the killer is revealed, he/she gives the final girl a long, hysterical explanation of how he/she killed everyone that had me saying “Whoa” and laughing at the same time. The direction is slick and professional, and the actors really bring it all together to make it all work. A true rarity for a film of this genre. As a matter of fact, Dead Body plays like a great murder mystery from another age, just a tad more violent. OK, it’s a lot more violent, but that’s just fine by me. The biggest problem I had with Dead Body are the obvious adults trying to pass themselves off as teens going to college. But the film is so good & knowing that I wonder if that’s all just a part of the method to its madness?

As of this review, Dead Body is still working the festival run, but I expect a film of this caliber is going to get a distributor really soon. Do yourselves a big favor and keep your eyes open for it, because it’s easily one of the best genre films of the year.

So, as always, Doc sends out a list of films that need reviewing and, as always, my reply is “Are any of them scary?” I always insist on  asking this […]

An apocalyptic event has taken place leaving David (Tim Kaiser) alone in the woods with little more than a pocket knife, a few meager supplies, and a battered old tent. […]