When I first got wind of Turbo  Kid, I wasn’t all too impressed. After reading a synopsis of it, I was pretty sure that it was going to be something for the kiddies. I had no interest whatsoever in watching what sounded like a Power Ranger/Kamen Rider clone. I even turned down an offer to interview the director, I won’t conduct an interview if I haven’t seen the film in question. And since I was POSITIVE that I wasn’t gonna dig this one, I had no plans on watching it – so no interview.

Then I saw the trailer! WTF is going on here? I instantly regretted turning down the interview, but I still hadn’t seen the actual film. Would it be as frenetic as the trailer promised it to be? Read on…

In a post apocalyptic future, Earth has become a wasteland thanks to a combination of war and pollution, and the only currency that means anything to anyone is clean water. There’s death and destruction in every direction, and a gang of dirt bike riding, metal mask wearing thugs who terrorize and maim whomever they come upon to steal their water. Having seen his parents murdered years earlier by these hooligans, The Kid (Munro Chambers) learned to get by on his own by trading in whatever small items he finds for food/water/comic books. When he retreats to his small hovel, he spends most of his time reading his comics, and dreaming of having superpowers of his own. One day, he stumbles upon a spaceship that crash landed years earlier, and upon closer investigation he realizes that it belonged to the famed Turbo Rider (the subject of his favorite comic). He also comes upon the rider’s super powered turbo glove, which gives him the ability to go after the warlord that orchestrated the death of his parents, Zeus (Michael Ironside). He recruits a one handed arm wrestler named Frederic (Aaron Jeffery) to help him in his quest, and a young girl named Apple (Laurence Leboeuf), who has a secret. The three of them are sorely outnumbered by Zeus’ ragtag army of misfits and his enforcer, Skeletron (Edwin Wright), but with the extra added power of the glove that the kid wears (he becomes Turbo Kid when he wears it), they just might have a shot. 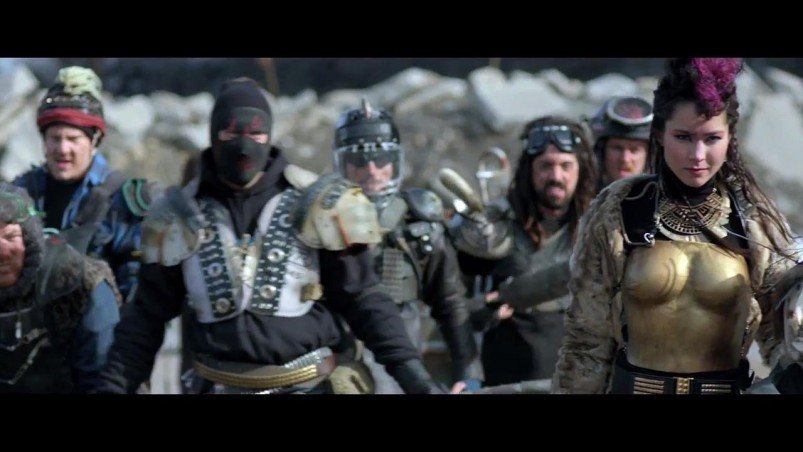 First things first, Turbo Kid is indeed as frenetic as its trailer promised. As a matter of fact, it’s so frenetic that it nearly lost me a couple of times. The barren wastelands where it takes place, and the piecemeal outfits most everyone is wearing are an obvious homage to the Mad Max series, but it never feels like a cheap Road Warrior knock off. It also breaks away from the post apocalyptic genre by upping the gore content to ten. Apropos to it’s title, it’s a very fast moving film as well. It’s all very bright and spiffy and cinematographer, Jean Phillipe Bernier, does a great job of making it all look clean & sleek. Well…as clean & sleek as a wasteland can look anyway. The look of Skeletron is also an obvious nod to Hobo With A Shotgun’s villain, The Plague (Hobo’s director Jason Eisener has a quick cameo here as well). 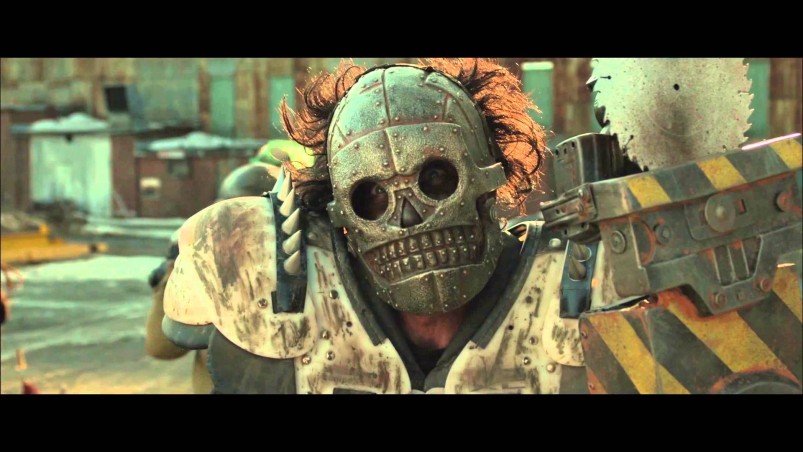 The performers do a good job of making a very silly plot (Written/Directed by Francois Simard, Anouk Whissell & Yoann Karl-Whissell) seem feasible. As Turbo Kid, Chambers maintains a sense of innocence to the proceedings, even as he literally explodes evil henchmen all over the screen. Jeffery pops in & out of the film, but he enlivens it everytime he appears with his rough hewn, Indiana Jones attitude. Ironside is one of the best character actors on the face of the earth, and it’s obvious he’s having a ball chewing up scenery (& co-stars) like bubblegum. The film runs into a bit of a problem with Leboeuf and her character, Apple. As I mentioned earlier, Apple has a secret that redefines the relationship she develops with The Kid. But that secret demands that the character carry a wide eyed innocence throughout the film, and it becomes annoying. It’s not Leboeuf’s fault, and she really delivers on evoking that purity. But it’s extremely cartoonish, and unappealing after a few minutes. Additionally, Turbo Kid is extremely violent. There are about as many scenes depicting arterial sprays as there are in Kill Bill Vol.1 (2003). 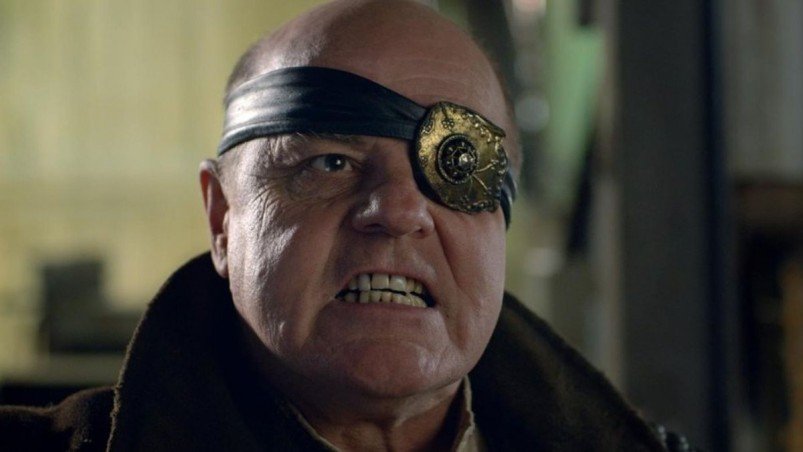 To call Turbo Kid a film for the little ones is like calling Debbie Does Dallas a film about human anatomy. At first glance, it might look like something a 8 year old might dig (indeed, he/she might dig it anyway), but its lurid, cartoon-ish violence is gonna take a toll on their fragile little psyches. It’s tonal shifts are jarring, and sometimes it falls into a malaise when someone isn’t being eviscerated on screen. But when it’s firing on all cylinders – Turbo Kid is a hell of a lot of fun. I’m not too sure it knows what its target audience is, it’s too erratic most of the time. But for those of you who imagine that Power Rangers defeat their enemies by cutting off their heads, and spilling their guts – you’ll be in hog heaven.

“Blood of the Tribades” (GenreBlast 2016): A Retro-style Homage to Early 1970’s Gothic Horror and Exploitation Undermined by an Inconsistent Tone

Early 1970’s exploitation is alive and well in Blood of the Tribades (GenreBlast 2016), which was shown at the inaugural GenreBlast Film Festival in Culpeper, Virginia the weekend of 2016 August 19-21. Co-writers/co-directors Sophia Cacciola and Michael J. Epstein have put together a low-budget horror piece that feels as if it could be a “lost […]

It Watches is directed and edited by Dave Parker and co-written by Parker and the film’s star, Ivan Djurovic. Parker’s previous work includes writing, directing and editing “Sweet Tooth,” one of the segments in 2015’s horror anthology Tales of Halloween. The film follows Andre (Ivan Djurovic) as his friend Robert (Rick Irwin) drops him off […]

Join John (Doc Rotten) Slattery, Chris Slattery, and award-winning filmmaker Christopher G. Moore as they review STAR WARS EPISODE IX: THE RISE OF SKYWALKER. The latest in the Star Wars films not only wraps up the sequel trilogy featuring Rey, Finn, Poe, and Kylo Ren, it also draws to a close the Skywalker saga begun […]