The Austrian horror film Goodnight Mommy  relies on one of the most recurring cinematic metaphors: mirrored  imagery. Film by its nature is based in reflective visuals, given that cameras record  as a literal mirrored image of those who are performing in front of them. It’s a concept that dwells deep within the most iconic images of  horror cinema, from the conjoined sisters in Tod Browning’s Freaks  to  the twins at the end of the hallway in  The Shining.  It’s a construct that asks so many potential questions. What is this reflection?  What secrets does it hold? Is it an exact copy or a version of ourselves we don’t want to see? It’s  all familiar territory, but does Goodnight Mommy explore it in an engaging new context? 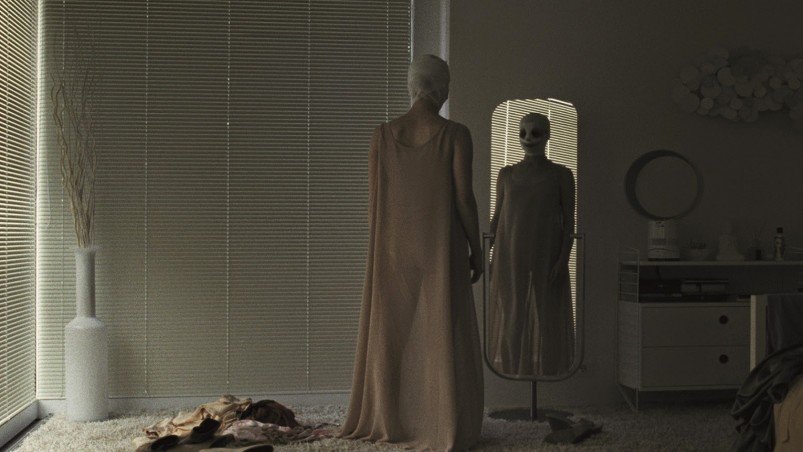 Well, that context is centered around twin brothers Elias and Lukas (played by Elias and Lukas Schwartz respectively) who are living in a countryside home with their mother (Susanne Wuest) for the summer. The mother has recently gone through major cosmetic surgery, forcing her to have bandages wrapped around her face. The boys notice that since the surgery, their mother has been far more irritable. For example, she demands  that all the curtains be drawn to allow her face limited exposure to sunlight and that the boys not disturb  her unless it’s crucially important. When they annoy her too much, she punishes them fiercely in a ways she never did before the surgery. Convinced that none of this seems right, Elias and Lukas attempt to investigate if this woman really is their mother or an imposter masquerading as her for more nefarious purposes.

Mommy  was recently announced as the Austrian entry in the Best Foreign Language film Oscar category, a category not usually known for receiving much acclaim or desire from The Academy of Motion Pictures, Arts & Sciences. However,  Mommy  did remind me of a similarly themed family drama that was previously nominated years before:  Dogtooth. While dealing with far more harsh and disturbing material than  Mommy,  Dogtooth  shares similar themes of isolation and trust within a family unit. In  Dogtooth‘s case, the trust is far too respectful  between the children and adults, forcing the former to stay captive at the mercy of the latter as a way of shielding them from the outside world until it invades the secluded dwelling the children have only known as home.  Mommy  is more focused on the immediate paranoia of the situation at hand, showing these boys being thrust into a new environment they’re unfamiliar with and a maternal figure  they feel has been compromised. Unfortunately, unlike  Dogtooth,  Mommy  decides to lean less on developing these emotionally stunted characters and more on basking in imagery that ultimately feels hollow. 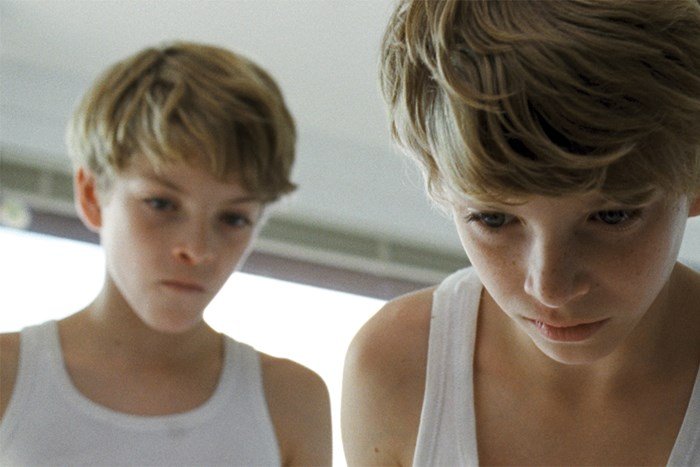 With Elias and Lukas, we’re meant bask in their uncomfortable awkward stage of childhood as they are left to their own devices and attempt to find out the mysteries of why their mother has changed so much. At age 11, they’re right at the cusp of adolescence and are obviously exhibiting severe trust issues, particularly in an environment this taxing and closed off from the real world. Yet, there’s nothing else in the characters to really latch onto  as an audience or  much for real life twin brother actors Lukas and Elias Scwhartz to work with. They just sort of screw around in idyllic countrysides or the dark corners of the house  while  attempting to solve a supposed mystery. They lack much definition in character beyond vague personality defects, without much representation of their previous relationship with their mother… and that all feels unfortunately intentional.

The real reason for their lack of depth is less from a failed effort at genuinely developing the both of them  and more of a purposeful false tension that helps feed into the film’s ultimate trouble: the twist. Obviously, it’s  hard to explain just how lame brained and dull this twist is without outright spoiling it, but it’s not one that needs to be explained for audiences to both catch it early on  and eventually  be underwhelmed by it, especially when that  revelation  is the main source of narrative development for our central characters. That lack of depth makes the “surprise” all the more transparent and unearned. It doesn’t help that the film moves at such a snail’s pace that the audience will likely spend the time they’re not being engaged guessing that twist. So, the slightest amount of shock that could give the film some narrative oomph is fruitless.

Honestly, the most consistently engaging element of the film really is the titular “mommy” character. The image of her draped in these bandages is a perfectly mysterious yet inviting design of visual symmetry. There’s a reason why her casted face is so heavily featured in the marketing, displaying the same sort of evocative sense of unknown possibilities as the iconic mask from  Eyes Without a Face in its simple yet haunting visage. Sometimes that image is used for more artistic exploitation than the film is capable of using effectively though, such as in a random forest hallucination scene that merely serves a redundant visual reminder of the boys’ lack of trust in here. None of this is to slight actress Susanne Wuest, who gives a layered portrayal that indicates the possibility of maternal open arms, but with a visceral edge that’s ambiguous enough to either be  caused by the post-surgery haze of  stress or a completely alternate personality we’re unaware of. If anything, her performance infuses the film with far more genuine mystery than the overall film has or honestly deserves.

Goodnight Mommy  isn’t a film without merit. Some of the images are captivating and Wuest’s performance makes it far more watchable than  it has any right to be. Yet, any of the artistry or craft is ultimately crushed under the weight of this narrow plot that hinges on a twist so inherently obvious and more importantly a complete lack of investing character to make that crucial twist mean much of anything. The nature of mirrored imagery is that we see a reflection of the events that have unfolded. Sometimes its a funhouse mirror that goofily distorts, other times its a cracked mirror that showcases multiple possibilities  of what may come. Either exhibit some sort of merit in their metaphoric display of what the subject is or could be. In this case though, it’s a very plain reflection that merely reveals  the subject  for what it is: a pretty face without a unique wrinkle in sight.

There is always a temptation to prepare for a movie sequel, or in the case of It Chapter Two a continuation, to watch the last film in the franchise and refresh your memory of what happened before. Well, don’t. Part of the thrill of watching It Chapter Two is experiencing the way director Andy Muschietti […]

Film Review: Halloween 2018 – Dave’s Comments On The Return Of The Iconic Franchise

Spoiler Alert!   I don’t think I included anything that could ruin the film for anyone but out of an abundance of caution – if you don’t want to possibly read anything that could give any plot points away – go away till after you see it.   Here – I’ll give you my short […]

Shout Factory Delivers the Goods with The Manitou, Legend of 7 Golden Vampires, and more

Retro horror fans celebrate! Certainly a move that would have been Black Saint approved, Shout Factory is releasing THE MANITOU April 16, 2019. Rejoice! This is a Blu-ray release we’ve discussed and cried-out for on the Decades of Horror 1970’s podcast. We’ve always championed this campy, underappreciated cult classic. And now it will be in […]